King of Fighters XIII (13) has been slightly delayed, as it will not be released on November 22nd, 2011 for the Playstation 3 and Xbox 360.  The new trailer above tries to highlight all of the packed features in the game.  With King of Fighters XIII having 10 game modes, over 30 fighters, NEO MAX Supers and if you pre-order the game you will get a 4 CD Soundtrack Set compiling all the King of Fighters music.

As if it doesn’t get better it will retail for only $49.99 and if that is not one hell of a package for that price, I don’t know what is.  For more coverage on the King of Fighters XIII, including trailers and more about the pre-order set go here.  You can check out the official site and the full press release can be viewed below. 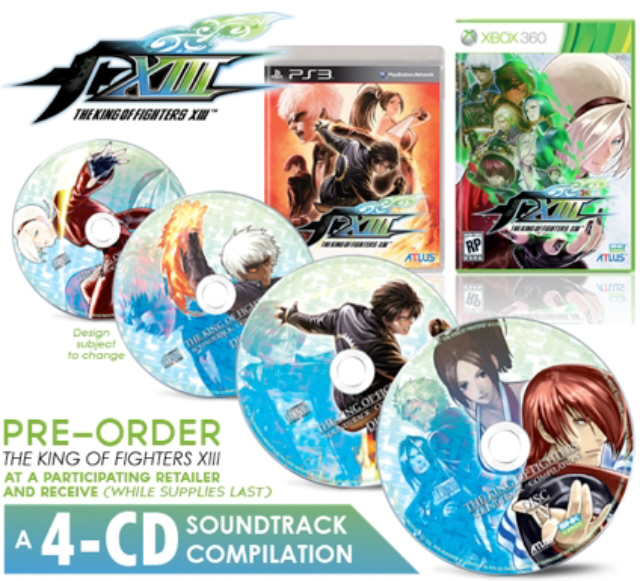 IRVINE, CALIFORNIA — SEPTEMBER 27, 2011 — ATLUS today announced a slight delay for THE KING OF FIGHTERS XIII, the latest entry in the legendary fighting franchise for PlayStation®3 computer entertainment system (PS3™) and Xbox 36 0® video game and entertainment system from Microsoft.  The highly anticipated fighter, vastly expanded and improved over its predecessor, is now set to launch on November 22.  In addition to news of the title’s new release date, ATLUS also today released a fast-paced, high-impact full trailer for the game, giving fans a formal invitation to take part in what is truly poised to be the ultimate fighting tournament.
The new trailer takes viewers through a tour of KOF XIII’s extensive content additions, new features and modes, rebalanced and retooled gameplay, and the tremendous 4-CD soundtrack compilation available for pre-orders at participating retailers.  It features more bone-crushing punches and kicks, more ground-shaking throws, and more over-the-top specials and NEO MAX supers than any previously released video of the game, giving eager fans a great feel for the final product.
“While fans will initially be disappointed by the news that THE KING OF FIGHTERS XIII is slightly delayed, the additional time will ensure that the game delivers on its promise of becoming the finest entry in the series’ 15+ year history,” commented Tim Pivnicny, Vice President of Sales and Marketing at ATLUS.  “KOF  fans have tremendous expectations for this title, as do we.  Our commitment is to nothing less than the very best THE KING OF FIGHTERS game ever, and all of our efforts and resources are dedicated to assisting developer SNK PLAYMORE to that end.”
At participating retailers while supplies last, fans who reserve KOF XIII will receive a 4-CD soundtrack compilation with music spanning the over 15-year history of the famed series, certain to be one of the best collectible extras in franchise history.  Fans are strongly advised to reserve their copy as soon as possible at participating retailers to guarantee themselves the bonus soundtrack compilation!
THE KING OF FIGHTERS XIII is scheduled to release on November 22 for PlayStation 3 and Xbox 360 systems.  For more info, visit http://www.atlus.com/kofxiii.