Everything you need to know about Kingdom Under Fire II

Set to be the fifth game in the Kingdom Under Fire series, chronologically set after the fourth game, Circle of Doom, Kingdom Under Fire II is slated for release on Microsoft Window’s PC’s and the PlayStation 4. The game is marked for launch in Korea, Malaysia and South East Asia at some time in Q1-Q2 of 2014 and Q2-Q3 in the west. The PlayStation 4 build of the game is set to launch at some point in Q3-Q4 of 2014.

The game initially began its development cycle some time before 2008 when it was officially announced to be released on the PC and multiple home consoles in 2009.
The game was set to retain all of its touted features, including the massively multiplayer online core and the action real time strategy portions.

The development of Kingdom Under Fire II has been somewhat troubled. As it furthered into development the game was hit by a delay, changes in the platforms that it was intended to release on and actual gameplay changes following player feedback that was gathered from a Beta test which was run in December 2011.

However, Blueside, one of the co-developers, confirmed that an Xbox 360 build was in development and that it would feature a more single player orientated campaign and an online multiplayer mode. There was also DLC planned to release alongside it, but the game was never said to be an MMORTS. This was reported on by Eurogamer in 2009 when the developer said,”Kingdom Under Fire II for Xbox 360 will differentiate itself from the PC Online version in that there will be more focus on the single-player aspect as for players to unveil the secrecy of Bersian history as putting themselves on shoes of heroes and reunite the scattered nations in deep and rich storyline,”

In 2010, Blueside encountered financial problems that resulted in the staff on the development team partially leaving with many others not receiving due payment for their work. The game remained in development hell for quite some time with departing staff members forming their own development studios, this was blamed for the games delay, stating that the departing staff left them undermanned and lacking the required manpower.

After numerous delays, the game was set to launch around holiday 2011, but in November of the same year, a PlayStation 3 build was announced to be in development which all but confirmed the further delay of the Xbox 360 build. Both of which were slated for a 2012 release date with no specific time window given. Further delays followed with the announcement of the PlayStation 4 build of the game which pushed the release schedule back yet again with the current status of the Xbox 360 and PlayStation being unofficially commented on.

Kingdom Under Fire II entered open beta in May 22nd of 2014. The release dates have been set as Korea, Malaysia and South East Asia at some time in Q1-Q2 of 2014 and Q2-Q3 in the west. Whereas the PlayStation 4 build of the game is set to launch at some point in Q3-Q4 of 2014. Given these vague release times, gamers and media members alike remain sceptical of the games release. 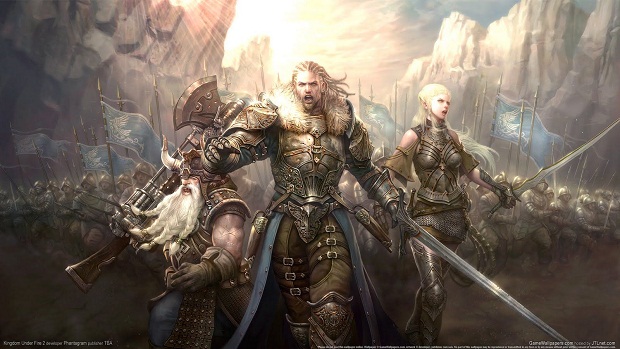 The game will look at the dynamics of a three way war between the Human Alliance, the Dark Legion and the Encablossians, a new species introduced to the game as inhabitants of Bersia, a continent from the previous games antagonist’s home dimension. 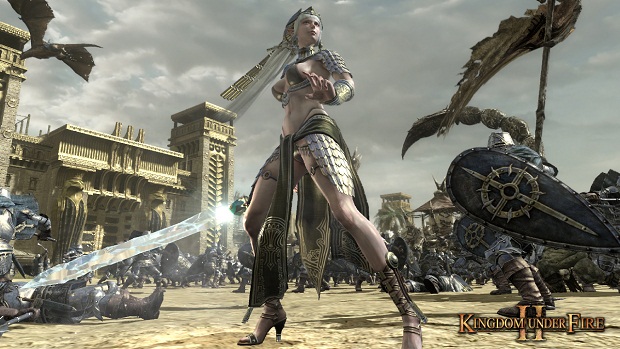 The gameplay dynamic of Kingdom Under Fire II is interesting in the sense that the real time strategic elements are fully integrated into the action role playing game portion of the game. Players can control their character on the battlefield and fight alongside their soldiers who will fight with them whereas controlling units like cannons can be controlled in a typical RTS style to direct their fire and spear men can be positioned on the flanks of infantry to form spear walls to protect against flanking cavalry attacks.

Thus far, not much information has been made available and actual gameplay mechanics information remains scarce. The game seems to play like the popular Dynasty Warriors in some places. 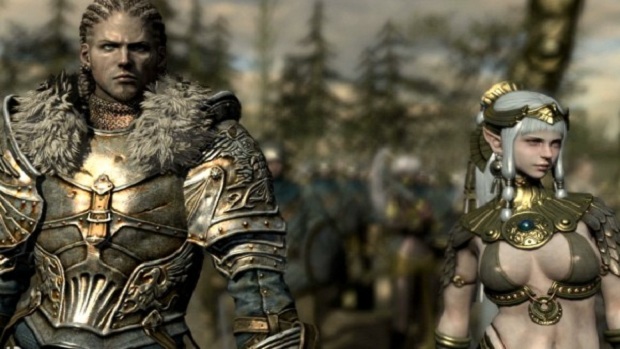 Thus far, no characters have officially been revealed,  the art for the game does heavily feature a female elf-like character, a human male with dreadlocks and a Dwarf wielding what I can only describe as a Axe Rifle.

For the sake of the games continuity, here are a list of already existing characters within the Kingdom Under Fire universe.