Kirby might be Nintendo’s most versatile character- not just in lore, where he can appropriate any enemy’s power, but also in a much realer sense. He’s been put in all sorts of experimental game, from the pioneering Canvas Curse, which brought us touch screen only gaming long before the iPhone was a thing, to Tilt and Rumble, which gave us motion controls before the Wii was out, to Epic Yarn, which sported a cloth and textile aesthetic before it was cool, to Air Ride, which gave us a hyper stylized arcade racing game unlike any other, to Amazing Mirror, which gave us a full fledged Metroidvania style Kirby game.

What I’m trying to say is, every time Nintendo has some spastic new idea, it sticks Kirby into it, and by and large, it does it to usually high degrees of success. However, Kirby Battle Royale represents one of the few times that one of Nintendo’s experiments with their pink puffball of a mascot has not worked out, in spite of how fundamentally sound the core idea seems to be upon first glance.

Battle Royale‘s premise is simple, and has little to do with PlayerUnknown’s Battlegrounds, and the ad hoc genre that its success has spawned- what happens if you take Kirby, with his extremely versatile pool of moves and powers, and stick him into a multiplayer action game? Especially once you throw in Nintendo’s signature chaos and unpredictability into the mix, as well as their imaginative takes on popular multiplayer modes… it should be a slam dunk, right? 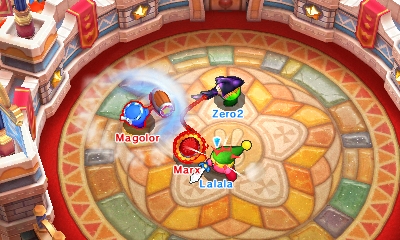 "Kirby is meant to be an inviting series of games that anyone can pick up and play, where the fun comes from engaging with the game rather than trying to master it. Which works well for a single player game! It doesn’t work well for a competitive player vs player style multiplayer one, which is what this game tries to fundamentally pitch itself as at its core.."

Except it isn’t. Kirby: Battle Royale should work in theory, but it comes off feeling flaccid. The reason is, sadly, Nintendo’s adherence to what Kirby is- it is meant to be an inviting series of games that anyone can pick up and play, where the fun comes from engaging with the game rather than trying to master it. Which works well for a single player game! It doesn’t work well for a competitive player vs player style multiplayer one, which is what this game tries to fundamentally pitch itself as at its core.

The sad part is, Kirby’s various moves and transformations translate over to multiplayer rather well in theory. The issue is that their implementation is extremely simplistic. You keep the same inputs across transformations for your attacks and movement, and those attacks and movement options rarely vary functionally– so while they might look different, the end result often ends up being much the same. Which means that in the end, there is no player skill or input required, and it just becomes a contest of attrition, to see who can button mash their way to victory first.

The thing is, though, that to begin with, you probably won’t even play the game multiplayer- you’ll play it single player. Paradoxically, this is where the game seems to be at its best, in spite of the multiplayer trapping that the game seeks to fashion itself with.

The premise is silly, as it always is in a Kirby game- it involves King Dedede cloning Kirby endlessly and pitting him against himself, and the game keeps things interesting by putting various restrictions on what you can and cannot do, forcing you to be creative. The campaign also acts as a nice tutorial for Kirby’s abilities (there are 16) and the various battle modes (there are 10). It’s a shame that it’s so short- you will be done with it in well under a half dozen hours-  because what follows this is far more disappointing than your time with the campaign might suggest. 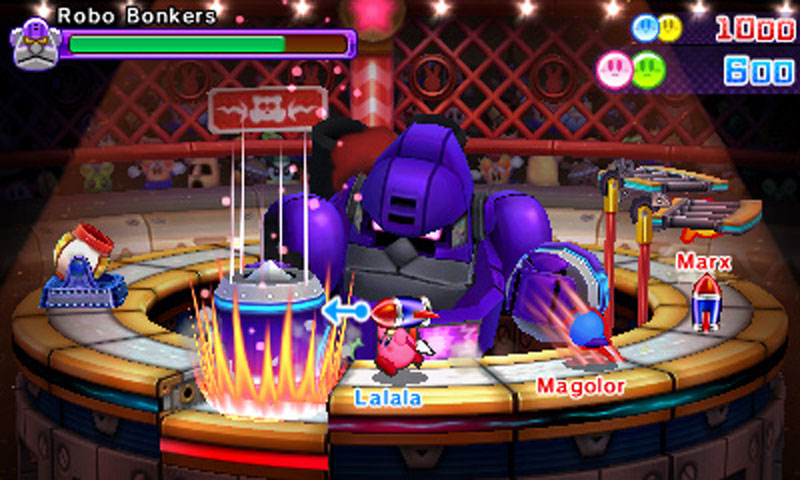 "Paradoxically, single player is where the game seems to be at its best, in spite of the multiplayer trapping that the game seeks to fashion itself with."

You can either battle against CPU opponents, which becomes an exercise in tiresome dreariness because of how easy to predict they become, or you can try to go online and try to battle random players. Online mostly works well (there can be minor lag sometimes), but without any way to communicate with other players, it becomes an exercise in you mashing the buttons to dash and attack your opponents, while they do the same, and hoping that your blows connect more and before theirs do.

In local multiplayer, on the other hand, the game shines, relatively speaking- and it makes it easy for you to set it up, too. The game supports Download Play, which means only one of you needs to own a copy of the game (everyone else will just download some data from that player, and then they can jump in). Local multiplayer becomes fun, as you all scream and laugh- in many ways, it evokes the best of Nintendo’s couch multiplayer experiences. But Battle Royale lacks the skill depth that something like Smash can demand, or the unpredictability and chaos that something like Mario Party can offer. It’s fun, should you decide to play it- but you have no reason to decide to play it, there are superior offerings even within Nintendo’s catalog, even within Nintendo’s 3DS catalog.

In spite of the general disappointment and underwhelming nature of the game, however, the one thing that is clear is that it is a really well made game with typically high production values- which, of course, is something you expect from a Nintendo game. Graphics are colorful and cheery, and instantly catch the eye and engage your attention, while the soundtrack is typical Kirby fare. Neither of these are going to win any awards, per se, but Kirby: Battle Royale is a decidedly pretty game, with a pleasant soundtrack that manages the enormous feat of never getting grating or annoying.

I think, much like Rainbow Curse on the Wii U, this is a game that would best work for younger players and they are likely to enjoy the game’s simple controls, and the ability to win even if they’re not necessarily good at the game. Households with younger kids and 3DS systems would stand to benefit the most from Kirby: Battle Royale. For everyone else, this is one of the few times that Nintendo’s pink puffball has managed to falter.

It's fun in local multiplayer, and kids are likely to enjoy it; single player mode is enjoyable

The game is shallow, and you're likely to get bored of it pretty quickly; the single player mode is too short to be very fulfilling.

Households with younger kids and 3DS systems will definitely like what Nintendo did with Kirby Battle Royale but for everyone else there are better options out there.

A copy of this game was provided by developer/publisher for review purposes. Click here to know more about our Reviews Policy.
Tagged With: HAL Laboratory, Kirby Battle Royale, Nintendo, Nintendo 3DS