Knack 2 can be fun at times but it's largely a mediocre experience.

After the first Knack that launched alongside the PS4 back in 2013, I wasn’t quite sure why the developers at SIE Japan Studio were adamant about making a sequel. For a family game,  gameplay was a bit harder than most kids could handle and the overall experience just didn’t make it a fun time for me. Alas, Knack 2 is finally here and my thoughts on the game are pretty similar to the last one; though the game does have some fun and interesting moments, Knack II won’t win over the crowd who didn’t like the first one.

Knack, the ever-growing, ever-dismantling sentient life form made from ancient relics, is back. And this time he’s out to stop the sinister high elves from putting an end to all humans. This action-adventure, puzzle-platformer is filled with ancient secrets to unlock, dangerous enemies to put down, and a lot of cliché storyline to ignore. Knack, his returning friend Lucas, and Lucas’s uncle discover the rise of elves causing havoc within the world. These monsters have become dangerously overpowered and Knack and company want to get behind the mystery of it all. That entails traveling throughout the world, gathering clues from many different locations, and discovering who’s behind this elf invasion. Unsurprisingly, the story is dangerously mediocre and can make the average player take a quick snooze between cutscenes. It’s almost as though they purposely make the story uninteresting, and unnecessarily too complex for the child-demographic this game aspires to to really understand what the hell is going on.

This may sound odd when I say this, but the graphics in-game are actually better than the cutscene graphics. Knack (the character) always looks pretty good whether he’s in-game or in the cutscenes, but ever human character just looks awful. It’s almost as though the graphics took a step back to early PS3 days. To be fair, nothing really stands out within the game itself. 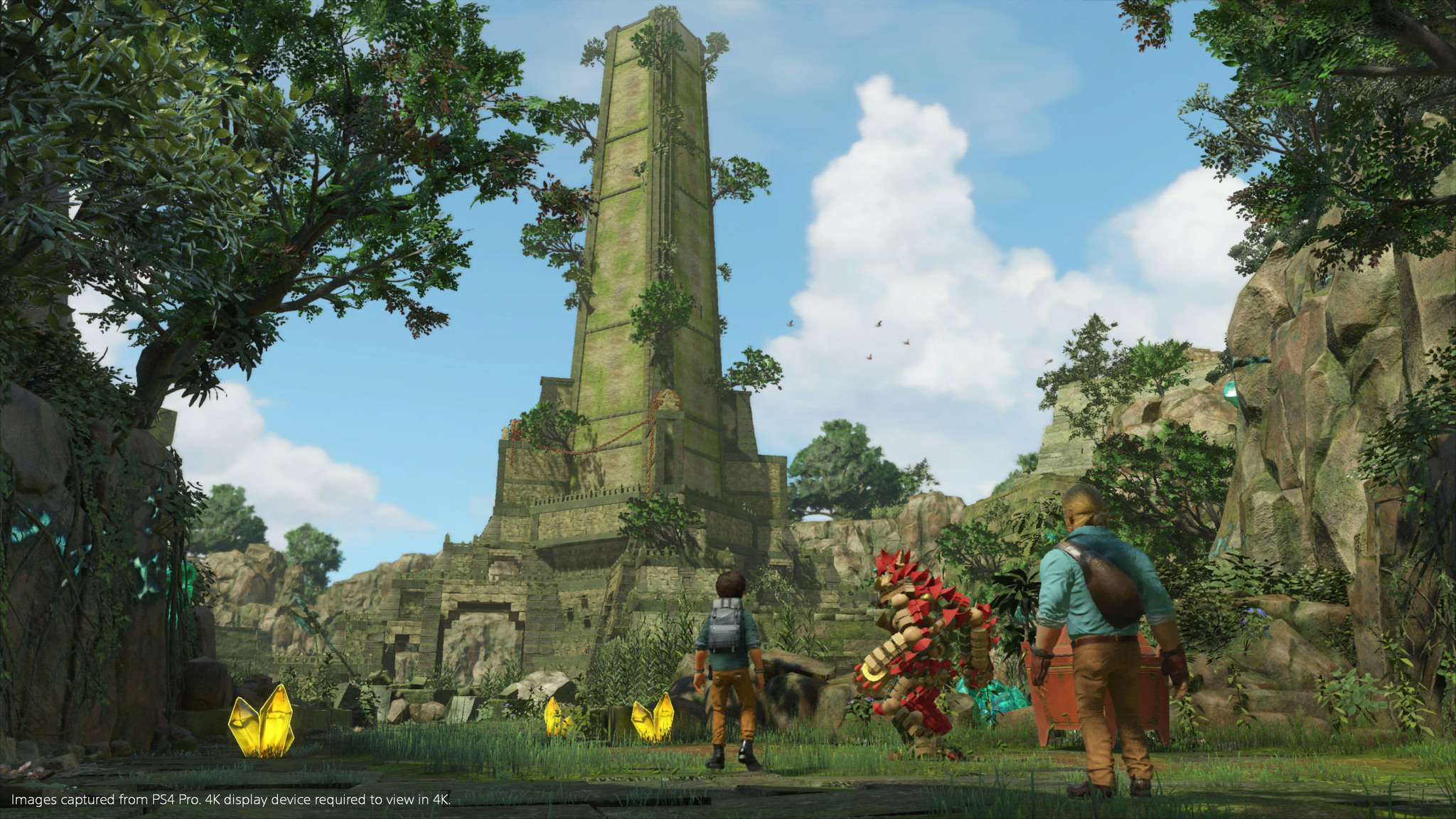 "Each location is filled with puzzles, secrets, collectibles, things to do, but it all looks and feels exactly the same as the last place you’d just been."

You’ll get a diverse lineup of locations: city, desert, jungle, ruins, etc. Sadly, with all of those diverse locations, nothing truly stands out. Each location is filled with puzzles, secrets, collectibles, things to do, but it all looks and feels exactly the same as the last place you’d just been. As little Knack you’ll fit into vents, air ducts, and crawl spaces where big Knack can’t fit. The controls for little Knack felt stiff but worked well enough for the short bursts I needed him for. The worst situations you’ll get into with little Knack are scaling tiny ledges up walls. These ledges are so small only little Knack can walk across them, but they’re so small that he has trouble clinging to them from time to time. After the first few falls I came up with a technique that helped me stop falling, and that’s always pushing forward and into the wall as a I jump. This process makes Knack looks like he’s bad at jumping and landing, but hey at least he lands on the ledge more often.

Knack II is basically a game based on converting the character Knack from a small-scale doll-sized being to big-scale goliath  at the touch of a button — or in this case R1. Progressing through the game, Knack will often come across various ways to collect more relics that automatically attach to him, causing him to grow in size. As you find more relics to collect, Knack gets bigger and bigger until he’s a towering beast of destruction. However, don’t expect to get into just any stage and rampage through the level as big Knack. Much like the first game, the levels are scaled accordingly and each level has a specific number of collectible relics to increase Knack’s size. For the first third of the game, Knack will grow (if you find enough relics) to a modest height — that’s only a little taller than twice the size of Knack’s human friends. Later on, however, you can expect him to get much, much larger.

As the game progresses, the game does embrace set pieces and really gives you that feel that Knack really is a monstrous beast not to be trifled with. He’ll eventually be smashing his way through ancient ruins, climbing towers and throwing monsters around. There are a few downsides to playing as the ever-growing big Knack, though. Big Knack becomes slower, his hits are more clumsy and and the frame rate begins to slow as the many particles and on-screen enemies make for a challenge to the base PS4. There is an option to lock the frame rate at 30 fps, but it still slowed down for me in some of the bigger battles. As you’ve probably guessed, as Knack gets bigger so do some of the enemies. There’s never a moment when I felt like the bad guys didn’t always have the advantage on me. It’s almost as if they know what attacks you’re going to do before you do them. They’ll roll out of the way, reflect your attacks easily and always have the upper-hand when it comes to getting the beat down on your character. Even when you’re a monstrously huge Knack, some of the smaller enemies are still difficult to hit; and even the smallest hit from them will bounce Knack back a few steps. 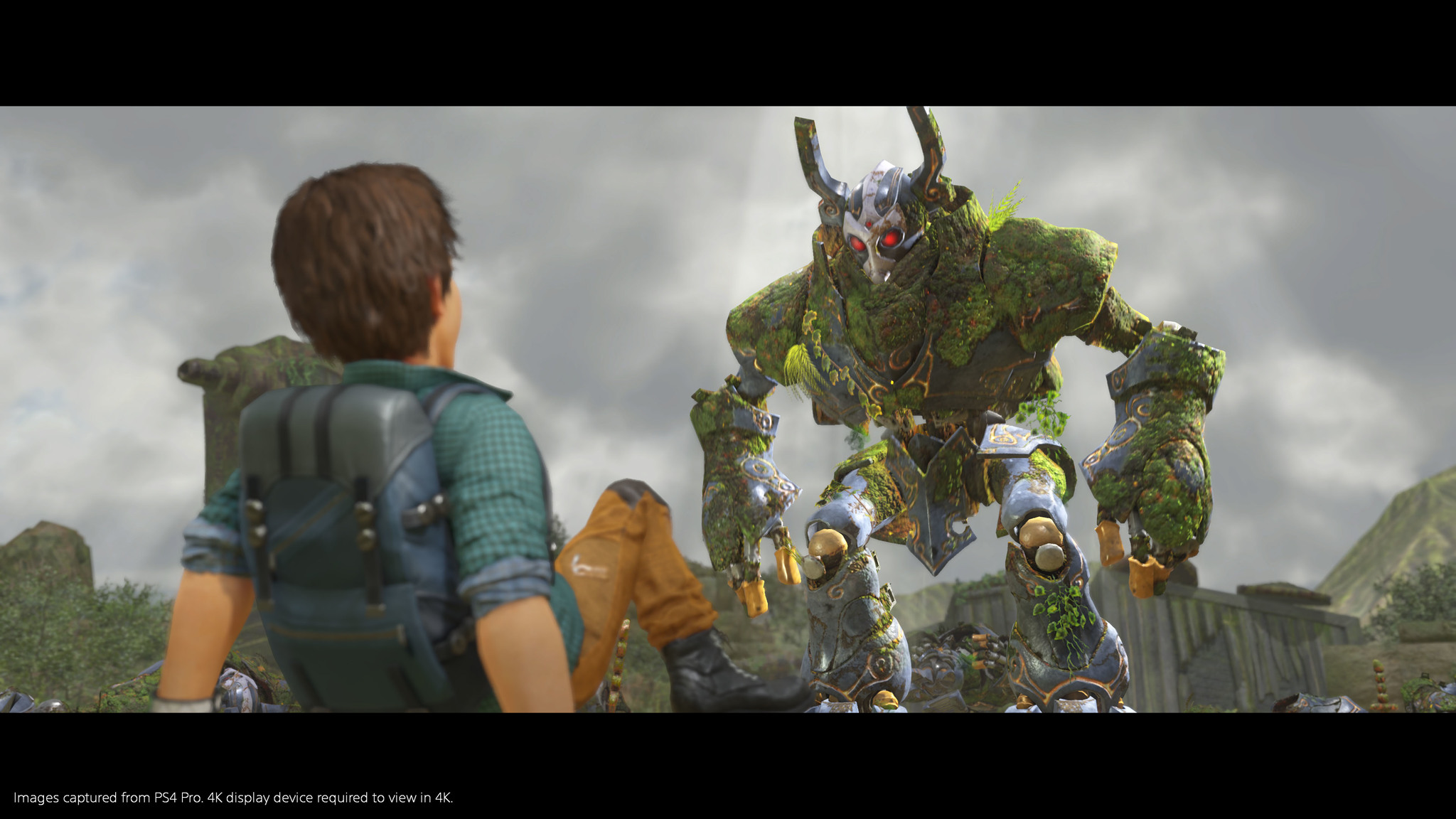 "The camera within the game is set and locked, but that didn’t make the developers hold back on hidden walls and paths that are hard to see. "

I never felt as though there was a level that I truly enjoyed. Each location felt exactly the same as the last and there was nothing new to gain after the first couple stages of the game. Progressing through the level and having to go from little Knack to big Knack was fun but nothing to write home about.

The camera within the game is set and locked, but that didn’t make the developers hold back on hidden walls and paths that are hard to see. There are tons of hidden areas within the game and the semi-set camera makes it hard to see much past what’s smack dab right in front of the screen. There are times when Knack actually has to pass through a hall or behind a wall to progress, and you have no idea if you’re stuck on something or walking through properly until the camera changes to the next space.

One of the bigger complaints of the last game was the game’s difficulty, and this game is no different. There is a steep difficulty and the game is very unbalanced when it comes to enemies. Within the first hour of the game you’ll run across enemies that can shoot, block, and defend while you still haven’t gotten a hit off yet. As the game progresses, you’ll learn many different and new moves that will make taking enemies down easier, but not all moves work on all enemies. I often found myself doing the same two moves over and over: a heavy punch and a belly flop on everyone. It worked, and I didn’t have to find out each enemies particular battle variations. There is an easy mode and very hard mode, but normal felt good for me. Sometimes I found myself in situations where I just couldn’t figure the enemies out and I died a few times before realizing that some of their battle tendencies aren’t like you’d see in other games, they’re a bit too ahead of your own thought process. 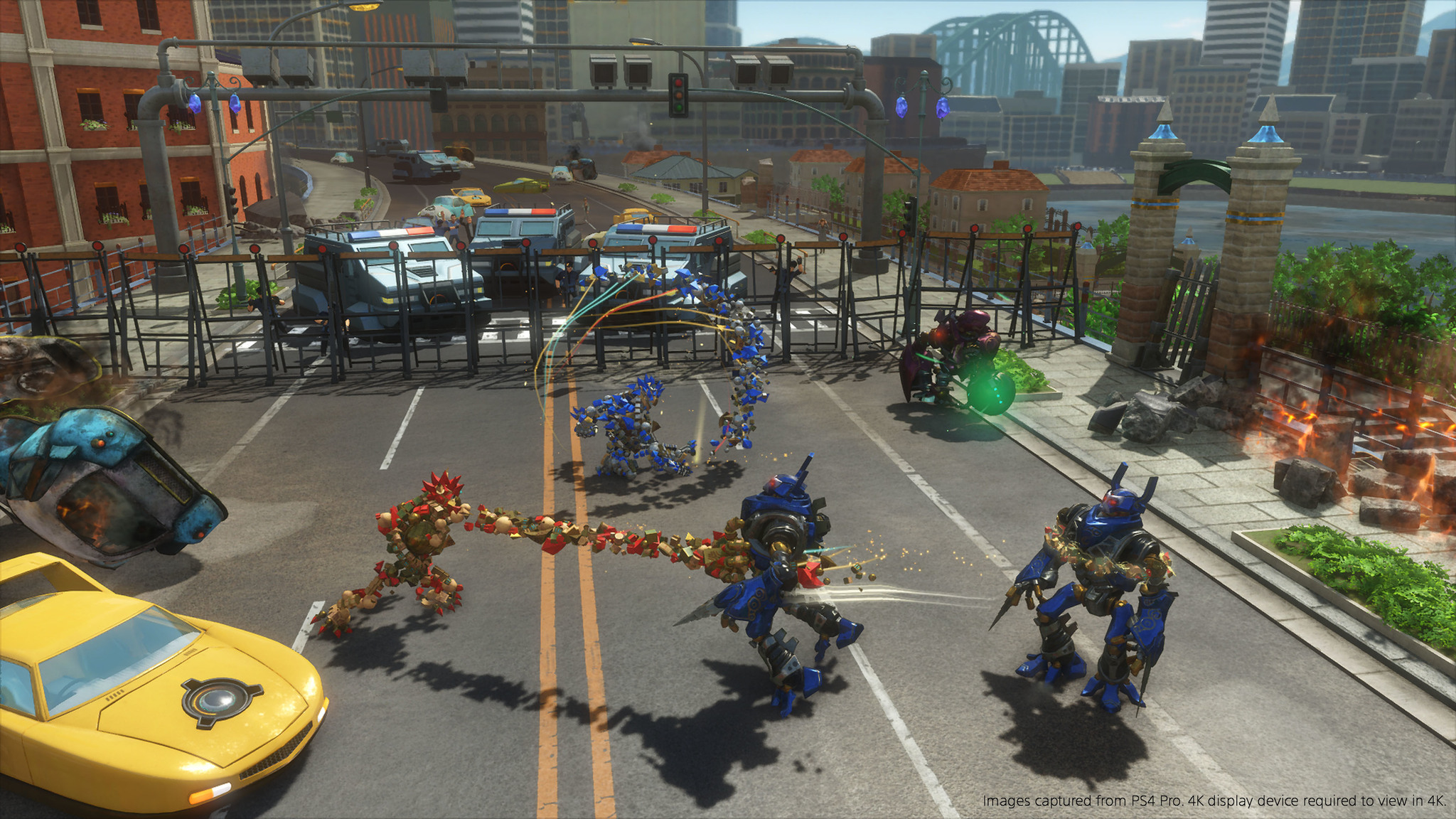 "Overall, Knack II is still mediocre, but it has a few moments that are fun. If you just want a game to pass the time, Knack II will be good for that. "

Knack II is filled with things to learn, to find, and to do. By pressing the touch pad you’ll access the Power Up screen. Here you’ll find new abilities that help you gain momentum in battle; such as greater strength, faster moves, etc. Each ability costs one point and up, and to get points you need to fill the relic energy gauge by simply busting open chests, killing enemies, or killing defenseless animals and bugs. There are also many other chests that contain parts to help build new abilities that can’t be unlocked through the Power Up menu. These abilities have to be attached and are often very helpful, but you must collect the adequate amount of parts to gain their abilities. There are also different variations of Knack armors such as the returning Stealth Knack, and Iron Knack that help in various situations throughout the game.

The voice overs within Knack II are surprisingly good, and sometimes the humor made me chuckle — slightly. However, the music sounds stock and didn’t have a memorable moment within the entire game. There’s also a co-op mode that allows you to bring your friend into the game and enjoy the adventure together.

Overall, Knack II is still mediocre, but it has a few moments that are fun. If you just want a game to pass the time, Knack II will be good for that. You won’t find anything new or anything that redefines the genre, but I don’t think the developers were ever going for that in the first place.

The scaling of Knack is a lot of fun to behold, voice over work is good.

Level Designs are all the same, cutscene graphics are worse than in-game graphics, story is boring.

Final Verdict:
FAIR
Knack II didn't really need to happen, but it did. There was nothing new to gain from the experience, the story is boring, but the game has a few fun moments here and there.
A copy of this game was provided by Developer/Publisher/Distributor/PR Agency for review purposes. Click here to know more about our Reviews Policy.