Some of you may be wondering on what is Knack? Knack was the first game that was revealed for the PlayStation 4 back in February during the PlayStation 4 announcement. The reason that Knack caught my eye was the fact that it’s a brand new action/platformer IP from Sony. When PlayStation 3 launched there was not a single new IP in the platforming genre, so seeing a next-generation reveal of a platforming game was definitely exciting. 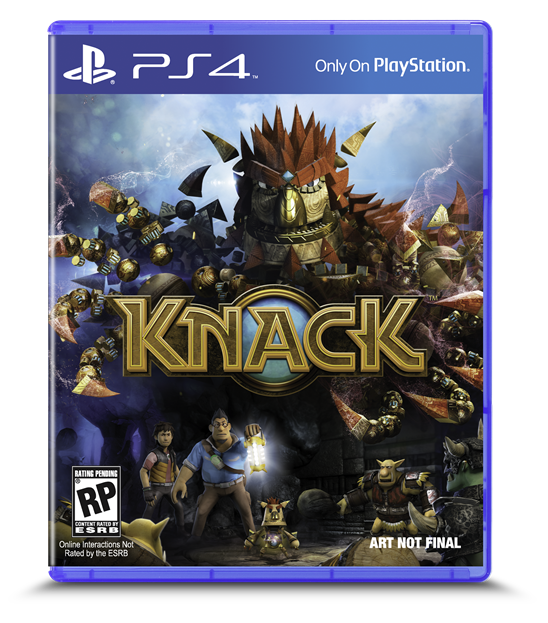 Mark Cerny is not only directing Knack, but he also created the PlayStation 4’s architecture/specs, Jak and Daxter, Ratchet & Clank and Crash Bandicoot franchises. Now that you have a little bit of the background knowledge on how Knack become a reality for the PlayStation 4 and who’s behind the development it’s time to talk about my first experience playing a next-generation platforming title.

The Feel of a Next-Generation Platformer

Playing Knack for the first time was a fantastic experience and a fabulous game to test out the brand new DualShock 4 controller. The controls felt great, and it was easy for me to figure out which button did jumps, movement and attacks. As a platforming game at heart you have your standard jumping, double jumping, dodging, attacking and super moves buttons. Everything that I did in the game just felt natural and responsive thanks to the DualShock 4. I was able to platform my way throughout the game’s environments, fight off evil goblin soldiers, traverse dangerous ice caverns, find the secret treasure rooms and stealth my way around a secured facility through lasers. 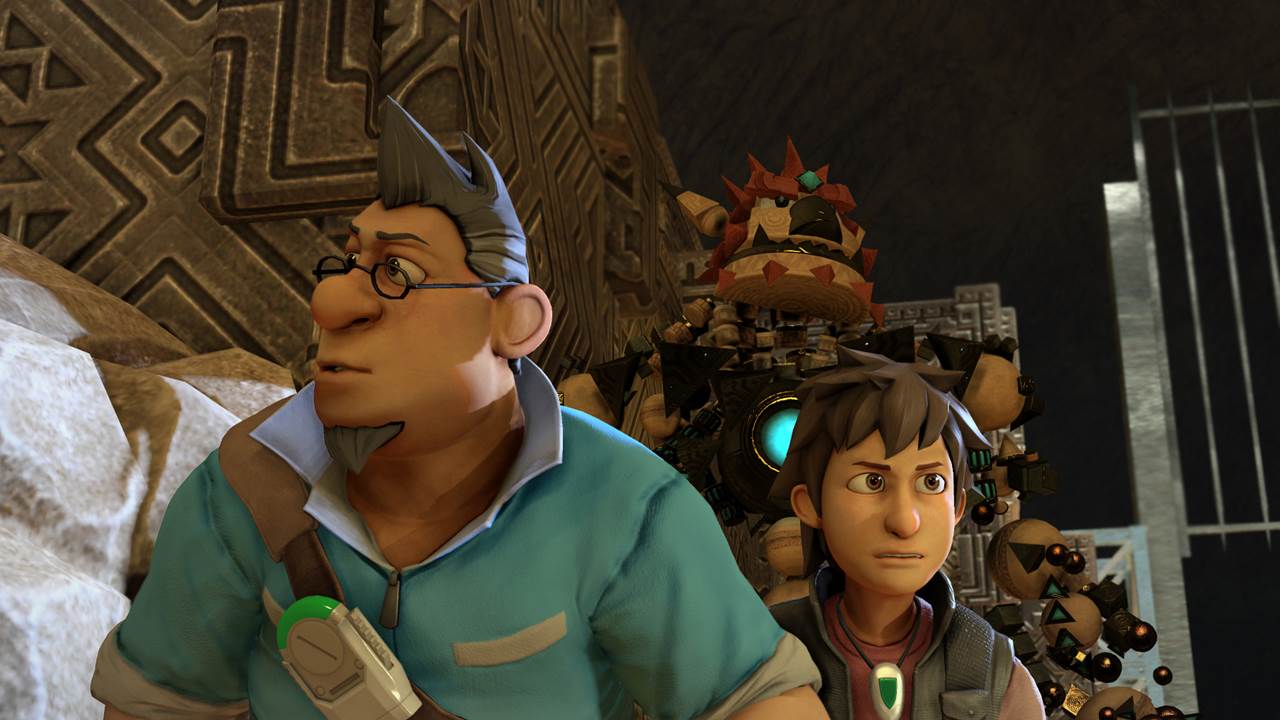 A good way to compare Knack to other platformers would be to take everything that you love about platforming games and then add beautiful Pixar-like visuals, 60 FPS, beautiful particle effects and simple but hard to master game mechanics. The overall feel and control of Knack is on point and well designed, but the main thing is obviously is the gameplay and how the game works.

In the beginning, the game felt that it was too easy, but I was quite wrong when I started to understand how the game works and how you have to master it in order to get through the game on a higher difficulty settings. Majority of platforming games these days are too easy, and I felt that Knack would go the same route, however, I am glad I was wrong. Knack features three different difficulty settings starting with Easy, Normal and Hard.

During my playtime on Knack, I decided to start off the game on Hard difficulty going in blind for the first time without knowing the controls and mechanics of the game to test out the game design and put myself to the test to see if I can figure it out by re-playing multiple times without getting too frustrated. The differences between the difficulty levels is quite vast but let me explain what the demo included and what kind of content was in the levels. 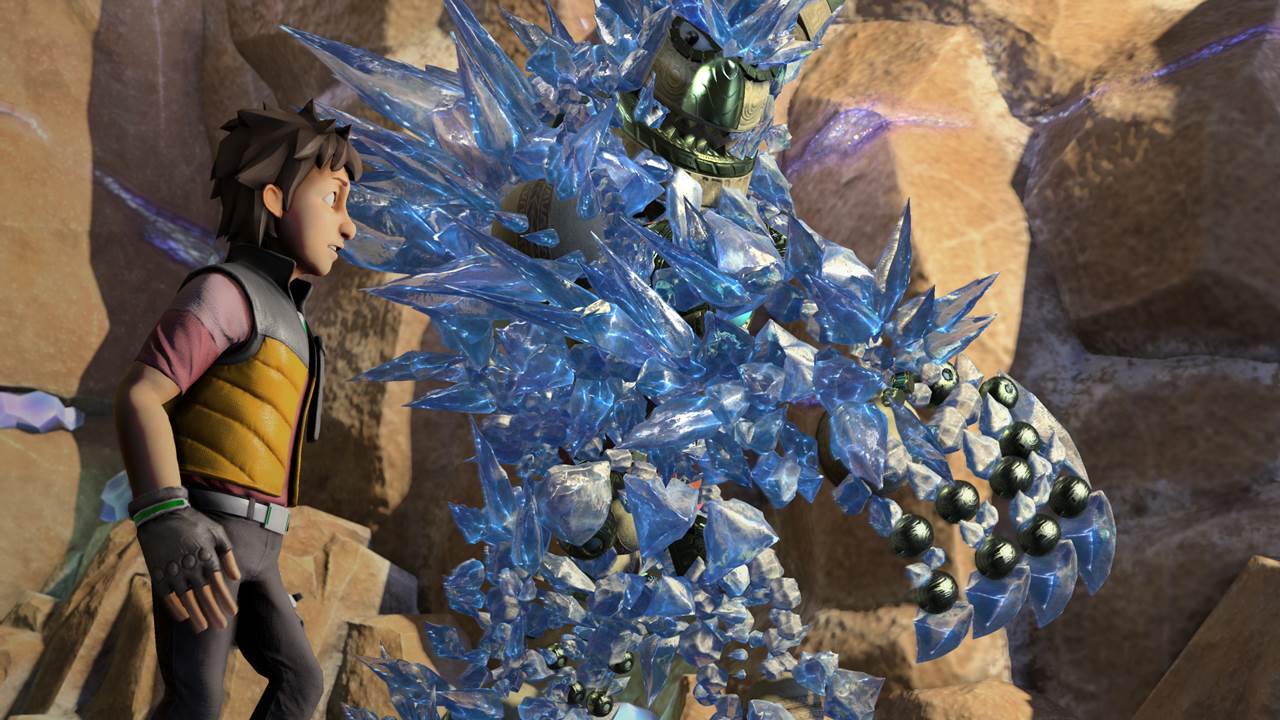 The demo featured different sections from multiple levels, with each section lasting about 3-5 minutes depending on what difficulty you played and if you try to discover all the secret treasure rooms.

The very first section took place in an outdoor urban city level where you ran around as Knack eliminating goblins and collecting relics to grow bigger. Relics can be found throughout levels by destroying certain type of objects in the game. Once the object is destroyed Knack gathers up ancient relics and grows bigger in front of your eyes as a beautiful particle effect animation is being played. When Knack grows bigger his damage increases, and so does his overall life-bar/health due to his growth in strength and size. 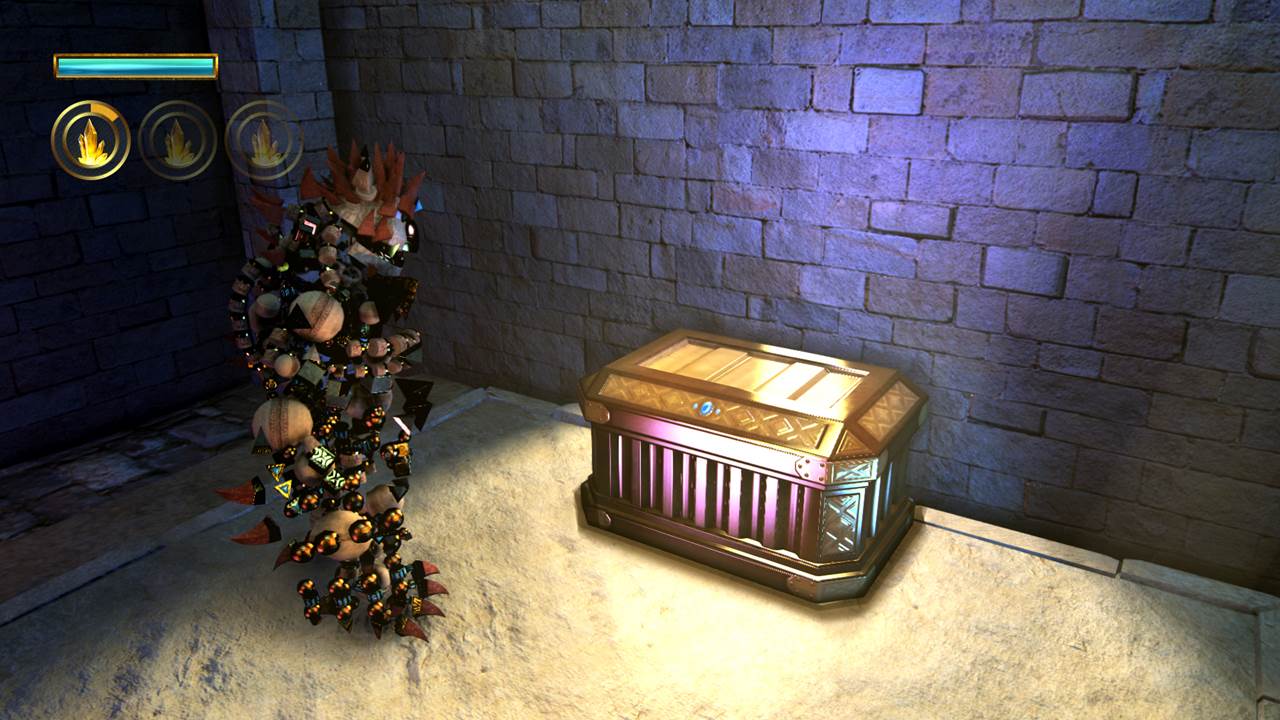 Knack also has plenty of secret rooms that contain treasure chests with secret items that can be collected together in order to craft a gadget that boosts one of Knack’s abilities or benefits players with new things. This is where the gameplay started to get interesting because being able to upgrade certain parts of your skills is essential to beating the game at higher difficulty levels. The most interesting aspect of these secret treasure items was how the multiplayer/social gameplay is integrated into this part of the game. For example, when you open up the treasure chest you are awarded with a random item that you may take or exchange for a different item via your friend-list right after collecting revealing what’s inside the treasure chest. 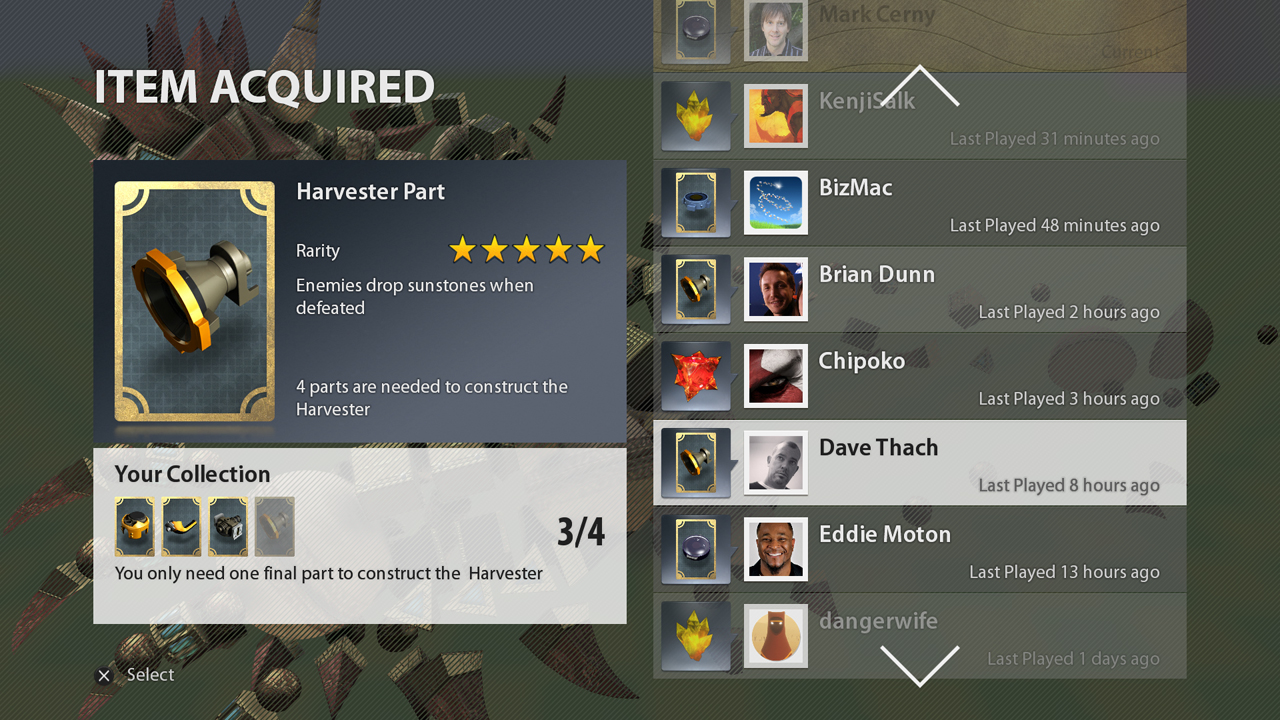 The game brings up a list of your friends and the items that they have received from this particular treasure chest, you then may choose to the different piece of the object in order to complete your set. Each item also has a rarity level meaning that the chances of getting it are a lot lower than some other objects. Once a set is complete you then may equip it to gain the benefits of the item that you have just built from collecting all the parts. This is a really unique feature and a cool way to make the gameplay more in-depth, despite the game being a single-player experience only you can actually benefit a lot from your friends as you go and hunt the secret treasure rooms.

The final version of the game will contain 60 of these treasure rooms and by collecting everything in the game you can unlock 6 more playable characters for your second play-through of Knack. This definitely adds a lot more replay-ability and fun factor to the game.

Another important gameplay mechanics are the Sunstone crystals that can be broken and gathered to power up Knack and grant him super moves. Right under Knack’s health bar you can see 3 big circles that fill up every-time you collect pieces of the Sunstone crystals. Once the circle is complete Knack is able to pull off a super move to clear an area full of enemies. These super moves can be pulled of by pressing different set of buttons on the DualShock 4. One of the moves that I was able to execute was a electrifying projectile that wiped out the goblins clean once it came in contact. 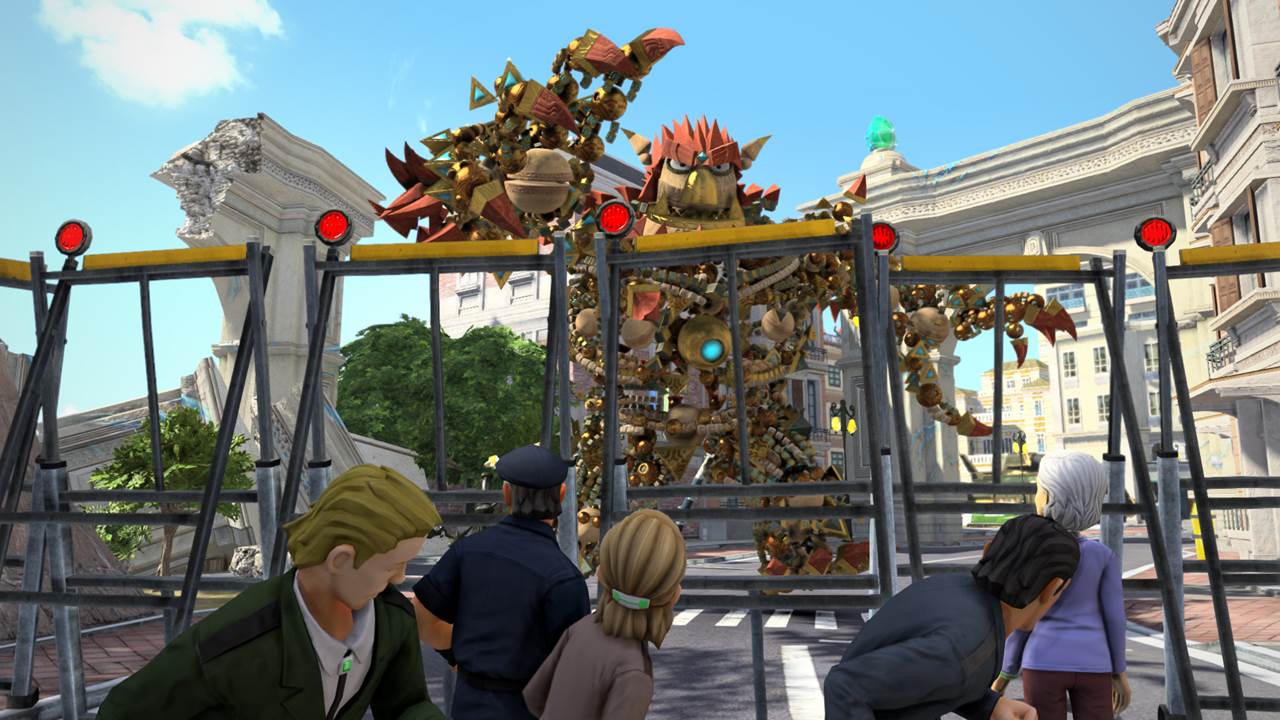 Mastering the special moves, collecting as many relics as possible, not getting hit and timing your dodge moves and attacks is the only possible way for anyone to beat this game on Hard difficulty. During my play-through on Hard difficulty I would get obliterated by two hits from one of the most basic goblin enemies. When I faced goblins with rockets and huge axes one hit would take away almost a half of my health if not more. This is where the challenge comes in so get ready for a ton of replay value and a next-generation platforming experience.

In the second section, the level took place inside a facility with a couple of human and goblins enemies. This section let you test out the stealth sections of the game. As transparent Knack, you can get through lasers and break into ventilation shafts to find secrets. While playing as transparent Knack, you can switch your form between regular Knack and stealth Knack to start fighting enemies by pressing R2 on the DualShock 4. 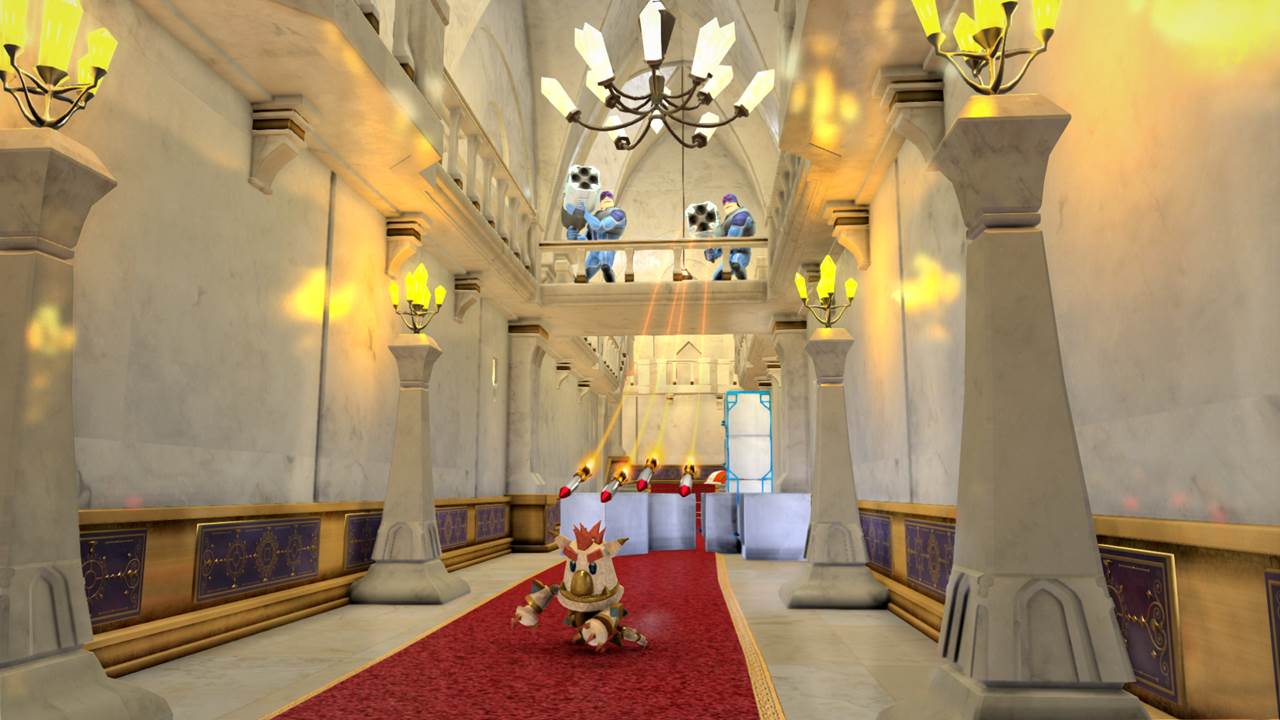 Third level took place in an ice cave that demonstrated how Knack can absorb different elemental particles. For example, when I was breaking ice crystals and gathered up relics my Knack was turning into a hulking walking frost armor which was awesome. This section was the most difficult part of the demo due to more types of enemies on screen and the sliding ice floor that made dodging enemy attacks a lot harder. When I played this level on Hard difficulty, I was basically forced to switch to Normal difficulty because I kept getting stuck at one part. I would’ve eventually mastered it, but I switched to easier difficulty for the time’s sake and completion of the demo. 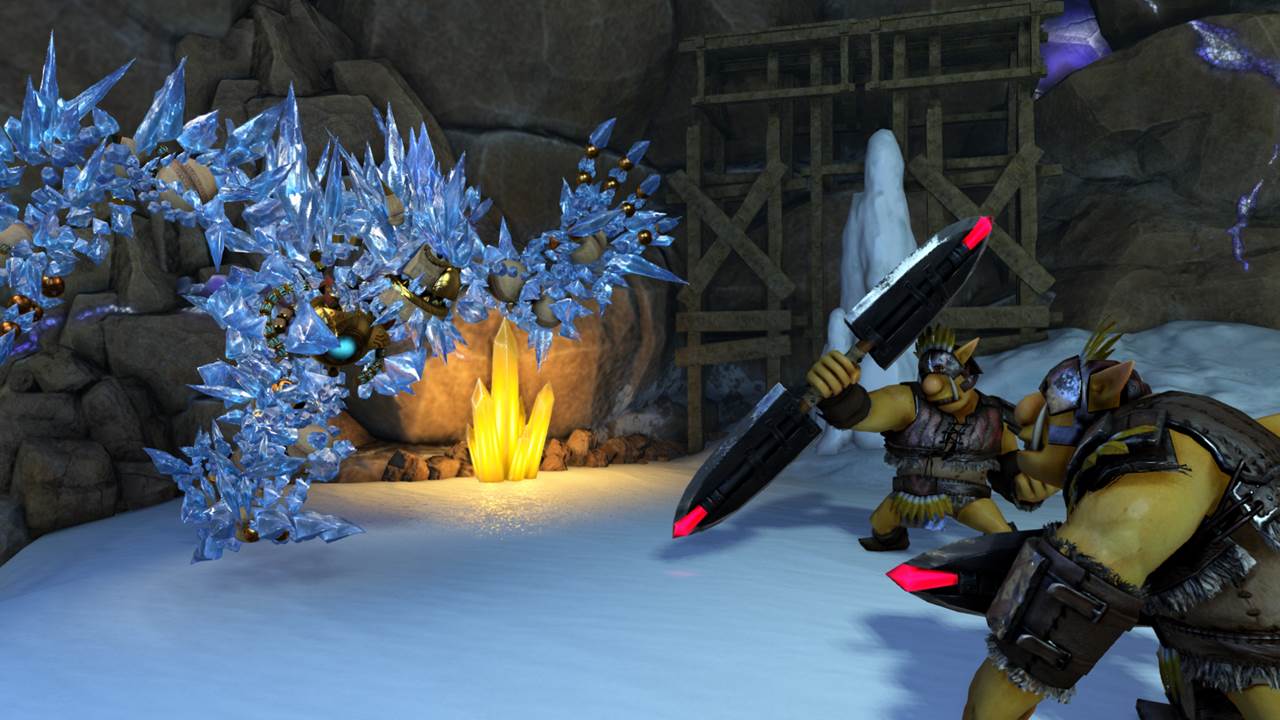 The last section was actually another part of the first level that was at the beginning of the demo. This part let you play as a full grown Knack with maximum life-bar and damage increase. Smaller enemies are no longer are problem and can easily be killed with one-hit, however, this time I was also faced against giant robots, airships and tanks that tried to take me down. As full grown Knack I was able to pick up vehicles from the streets and throw them towards airships to pin them down, or you can try jumping and hitting them with your giant fist if you can get in the right position and perfect timing.

Overall of these playable sections provided me with positive feedback and an enjoyable experience thus far. I was quite pleased with how Knack felt, played and what the PlayStation 4 was capable of in terms of a next-generation platforming game. I expect the games to get better and better as time goes by.

In conclusion I was satisfied with Knack and my hopes are quite high for the final product and I am looking forward to reviewing the game when the PlayStation 4 finally launches later this year. I have faith in Knack and I personally believe that this will be a solid launch title that everyone should experience if they get a PlayStation 4.