If you’ve ever played Dodgeball, then you already know the gist of how to play Knockout City. One of the game’s greatest strengths is its simplicity. Being able to jump in and almost immediately be decent at a game will always be a strong way to keep it fun – especially in this age of Fall Guys, Rocket League, and other games that lean into being easy to quickly wrap your head around. The thing that keeps games like those relevant long term, though, is a steady sense of variety and maintaining a balance between being accessible but also rewarding those who choose to strive for a higher echelon of mastery. At the time of writing this review, Knockout City doesn’t have a whole lot of those things, but because of how well executed its core gameplay is, you probably won’t notice that for a while.

Jumping right into a game of Knockout City is probably the best way to figure it out, but there is a pretty thorough training course if you want to dip your toe in slowly. Either way, with how simple the basic gameplay is, you’ll be dashing around, catching dodgeballs and throwing them back into your opponents’ faces in no time. Aiming and/or charging your shot by holding R2, throwing the ball by releasing it, and catching it with L2 immediately feels comfortable and logical. Other expected abilities like sprinting, dodging, and jumping all come together just as well. As you keep playing, you’ll soon notice more of the quirks that Velan Studios have kneaded into the dough of the experience.

"One of Knockout City’s greatest strengths is its simplicity."

Different ball types can be found that have different effects like explosions or taking deceptive curves on their way to your target, faking them out and causing them to preemptively waste their short catch window. Special balls aren’t hard to find, but you’ll be using the basic ones most of the time. That iconic ringing smack of the dodgeball connecting with an opponent can easily invoke a sense of nostalgia for anyone who had a gym class at a public school. It’s perfect. Lining up a target that’s unaware of you or faking out one that is, then delivering a perfect hit right to their noggin is delightfully satisfying, as it should be, and never really gets old.

The different ball types keep the moment-to-moment gameplay even further away from anything resembling monotony than it already is. Although when you’re on the receiving end of them it can be hard to tell what ball type is coming your way. Some balls are easily catchable, and some are better off being dodged entirely. Each ball type does have a unique look while they’re in the air, but they’re perhaps a bit too subtle, and odds are you won’t be able to devote much attention to that anyway while you’re trying to maintain your situational awareness of everything else around you. Getting comfortable with the controls and the overall pace of the game will lead you to want to experiment with some different tactics to gain more of an edge, and there are some things you can master like dodging into an opponent, making them drop their ball or kicking them off the map. You can also turn yourself into a ball for a teammate if none are nearby. This could cost you dearly if an opponent picks you up first, though, so use that with caution. Winning two of the three rounds will win you a match, and that will exponentially contribute to your overall experience gained – that’s your general experience and the plethora of other metrics called “contracts” that you can work towards if you like.

The 3v3 games are the bread and butter of the experience. Basic matches are fun enough, but the Diamond Dash modes are a nice twist where the score is determined by how many diamonds are collected from fallen foes rather than KOs. The hectic scuffles that can erupt when everybody is in the same area are a chaotic blast, but I also really enjoyed the tension of moments when me and one opponent were isolated from the group, going mano a mano, faking each other out, catching each other’s throws, and seeing who would slip up first. I never felt comfortable in these situations but I always felt capable. 1v1 modes are also an option which basically take those tense moments and make them the entire match, and they’re more fun than you might think as a diversion from the team modes. 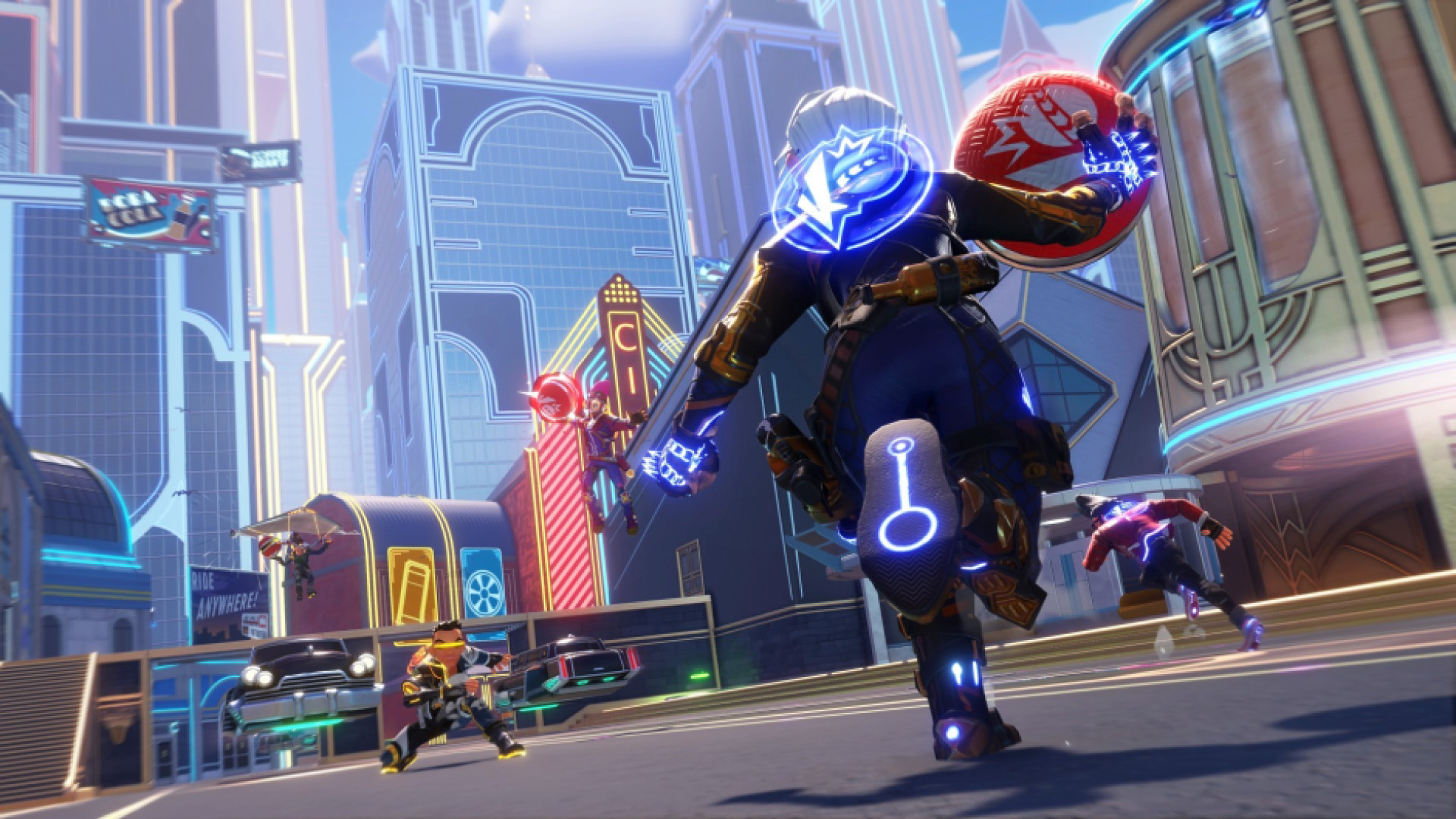 "Basic matches are fun enough, but the Diamond Dash modes are a nice twist where the score is determined by how many diamonds are collected from fallen foes rather than KOs."

There’s also a 4v4 mode with no balls that just focuses on players throwing each other in ball form, and it’s also a nice diversion, but probably my least favorite mode. When it comes to the variety of modes, I think Knockout City has just enough to keep it interesting, especially when you factor in the ability to create your own crews and play with your own group. Where the variety is lacking, however, is in the maps themselves. The maps are generally well-designed and fun to play on, but they are all so similar I was shocked to learn there were five of them. After playing the game for several hours, I could have sworn there were only three. One or two more maps with more distinct characteristics would have gone a long way here, but as it stands the level variety is basically just slightly different flavors of the same couple of ideas.

That’s not to say Knockout City’s visual ideas are bad ones though. It has a look that I wouldn’t blame you for being a bit tired of seeing in online games like this, but it does compliment the light-hearted nature of the experience well, and feels more organic to this game than most others that use it in my opinion. Characters are customizable to a degree that I didn’t expect. Choosing colors and styles of faces, hair, eyewear, and outfits is a nice bit of icing on the cake for anybody looking to build a unique-looking character beyond the typical costume changes you see in online games. Unlocking different intro and victory poses is also a thing here, which, despite adding nothing to the gameplay, seems to be pretty standard these days.

With everything going as well as it is for the game’s presentation, I was a little surprised to realize that I don’t really remember any of the music from any point in my playtime. It always seemed to fit the moment, which I suppose is the point of music in games, but that’s also the bare minimum. I haven’t played Fall Guys in weeks but I can still recall several melodies from that game way better than I can anything from Knockout City’s music. Sound effects are generally on point and the announcer does a good job of having enough of a presence to be informative but not distracting, so I suppose overall the audio for the game is good, but could have been great with better, more memorable music. 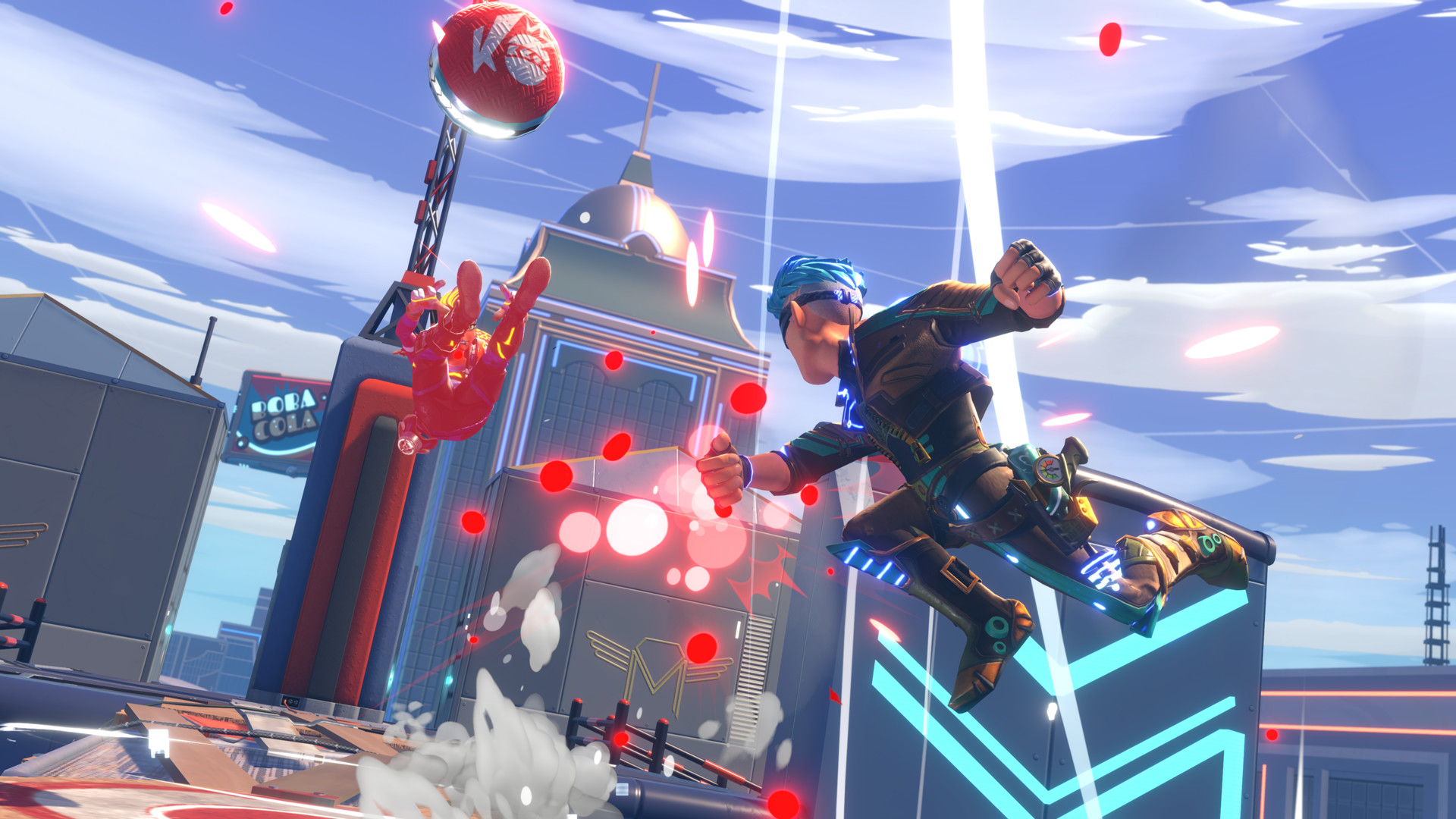 "Knockout City is a surprisingly fun trip into the idea of what would happen if the basic tenets of dodgeball were twisted around a bit and thrown into a multiplayer video game."

Knockout City is a surprisingly fun trip into the idea of what would happen if the basic tenets of dodgeball were twisted around a bit and thrown into a multiplayer video game. It’s a great idea and executed well. That said, it’s a bit thin at launch. At only 20 dollars, the mediocre music, maps that quickly blur together, and complete lack of local play options are all arguably excusable. Afterall, does it need much more than it has to be fun? Not really. But will the game rise to the level of popularity needed for it to stay relevant long-term? At the moment I’m not so sure about that. There are lots of other, meatier online experiences to be had at or below this game’s price point. The pieces are certainly there for Knockout City to be something quite special, so I’d say Velan Studios has a great shot at some real longevity with this game, but the ball is ultimately in their court on that.

Intriguing moment-to-moment gameplay; Diamond Dash is a nice twist; Takes a fun idea of dodgeball and makes it feel right at home.

Final Verdict:
GOOD
Knockout City brings more to the table than you might expect, but still leaves a couple of much-needed ingredients at home. As a result, its fate as a multiplayer game is unclear.
A copy of this game was provided by Developer/Publisher/Distributor/PR Agency for review purposes. Click here to know more about our Reviews Policy.