Find out what goes bump in the night in Carnivore’s upcoming horror title.

Posted By Leonid Melikhov | On 23rd, May. 2014 Under Article, Interviews | Follow This Author @Rengarious

Most horror games present a threat that you’re at least marginally aware of to oppose you. Some games throw biohazards, others chuck zombies but rare is the horror title that relies on menacingly unknown entities to hunt you down. We saw this in Red Barrels’ Outlast and now Carnivore Studio’s Kodoku is looking to bring an H.P. Lovecraft-inspired horror adventure to the PS4 and PlayStation Vita. Set on a Japanese island, you’ll need to survive against creatures inspired by mythology and lore who are looking to wear your hide for a hat. 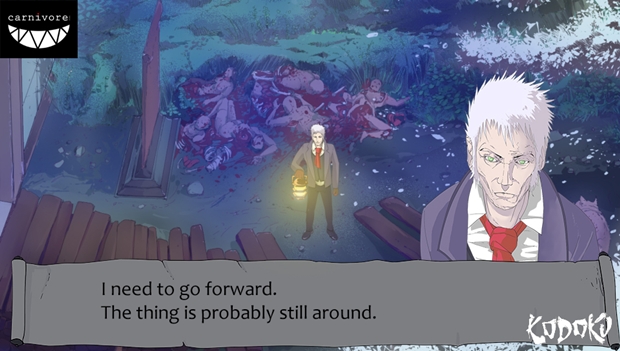 "After more research, and headaches, I built the game and it’s narration on this basic idea: The Island is a vase, and its characters are insects."

Leonid Meikhov: The game truly has a unique art direction. How did you originally come up with it and what inspired you?

Manuel Ruiz Dupont: We want to create a feeling of fear and anguish for the player, but it is actually quite challenging to do it without a first person camera. Therefore we created our own set of horror rules.

After testing many things, we started changing backgrounds and level perspectives, and characters’ anatomies to create a visual imbalance and uneasy feelings. We also work a lot on image evocation and on symbols. For instance, our teaser is an allegory of the concept of fear, associated with narrative elements from the game.

Burundanga: Those image evocations and deformations are actually pretty fun to exploit once they are

The style is inspired from anime we liked such as Hokuto no Ken, or contemporary artists like Chiharu Shiota. To talk a bit more about the art direction, I defined 3 different types of visuals depending on the information we would like to send to the player. Black and white plus a colour for game design information, two warmer colours to contrast with the black from the illustration, and finally, all colours for research on characters and backgrounds.

Leonid Meikhov: Tell us a bit about the game’s story. Being a horror game, narration is an important aspect. How do you plan to suck the player in?

Romain Toutain: My first idea was to create a horror game about loneliness in a Japanese setup. Doing some research I found more details about Kodoku, whose translation could be loneliness. Knowing more about the Kodoku magic, I thought it was worth digging into.

Manuel Ruiz Dupont: When Romain talked to me about Kodoku mythology, I knew we were going to easily give more depth to the game. After more research, and headaches, I built the game and it’s narration on this basic idea: The Island is a vase, and its characters are insects.

This allows us to easily find narrative mechanisms and player motivations. We then focused on the sense create by the player when an emotional action is done in a symbolic context. We are building the scenario on this principle.

We are going to give players motivation to know more about the game story, forcing them to think like someone who is slowly falling into madness, while trying to keep control. 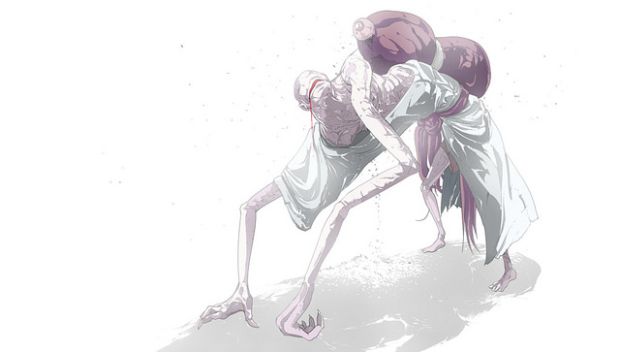 "To be fair PS Vita is our lead platform, therefore it’s coming along quite well. So far, we are planning to release the same content on all platforms."

Leonid Meikhov: The game’s gameplay is described as exploration and stealth. Can you please talk about this more in detail?

Romain Toutain: During the adventure, you will find more details about the island of Kodoku. Every place you visit can be visited again once you get more power – this is if you want to find all the secrets hidden on the island.

The exploration part is very important to us, since we do not want to give a superficial experience to players.

Manuel Ruiz Dupont:Just one thing about it. The more you use magic, the more you are going to enjoy it, but you will increase the island’s danger as well.

Leonid Meikhov: It seems that the game’s combat system uses magical charms that can help you face your enemies. How exactly will enemy encounters work in this game? Can you give us a scenario/example?

Romain Toutain: Sure. You have mostly two ways to solve encounters with enemies, the really stealthy way, and a more aggressive way. You could, for instance, use the time rewind spell on a broken gong to repair it, and then activate it so enemies would go it it’s direction, giving you time to sneak past them.

Another option would be to use the attraction spell (A spell which basically attracts ghosts somewhere) to drag them in to lethal places, or maybe trap them. Enemies have different weaknesses, like fire and light, and if you want to destroy them, you’ll have to find the best way to do it.

Romain Toutain: Yes it does. 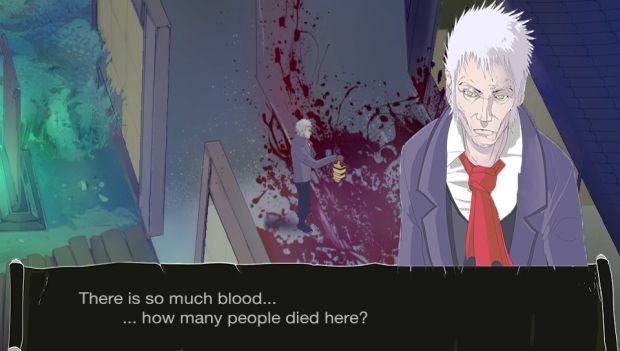 "The island of Kodoku itself is changing, and depending on your actions on the island, you will find more or less enemies and they will be more or less aggressive."

Leonid Meikhov: How is the Vita version coming along? Will it be the same content as the PlayStation 4 version?

Manuel Ruiz Dupont: To be fair PS Vita is our lead platform, therefore it’s coming along quite well. So far, we are planning to release the same content on all platforms.

Leonid Meikhov: Will the game support Cross-buy for PS4/PS Vita?

Romain Toutain: This is not decided yet. As a player, I’m personally in favour of this. It feels like my Vita is an extension of my home consoles this way.

Leonid Meikhov: Even though there is a seperate Vita version of Kodoku, will the PS4 version have Remote Play support?

Romain Toutain: Yes it will.

Leonid Meikhov: How many hours of gameplay can we expect from Kodoku?

Romain Toutain: The scope is always moving a bit, but so far we are aiming at about 7 hours.

Leonid Meikhov: The creatures/monsters in the game are quite twisted and scary looking. What’s the total amount of monsters we can expect to see in this game?

Romain Toutain: The island of Kodoku itself is changing, and depending on your actions on the island, you will find more or less enemies and they will be more or less aggressive. You will also find different enemies during exploration phases when you come back to places you have been before.

Manuel Ruiz Dupont:As said earlier, the monsters are a mix of insects and humans who are going to fight you or help you depending on your actions. 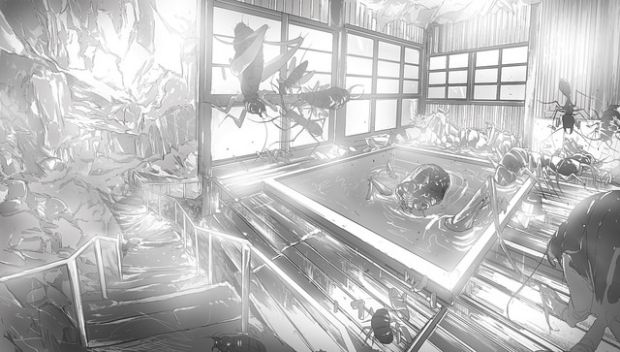 "So far, we do not have official plans to release it for Xbox One."

Leonid Meikhov: When is Kodoku coming out. Is it safe to say that we will get to play it sometime this year?

Romain Toutain: We are currently planning for a 2015 release.

Leonid Meikhov: How are you using the PS4’s unified 8 GB GDDR5 memory for Kodoku and how has it helped in the development of the game?

Romain Toutain: Well, there is so much memory to use!

Leonid Meikhov: Did you face any issues while developing the game on the PS4? Were you restricted in any way?

Romain Toutain: By the slower core speed of the PlayStation 4? Absolutely not. Our engine runs many tasks in parallel, and takes full advantage of the cores.

Leonid Meikhov: Are there any plans to bring the game to the Xbox One? If not, why?

Romain Toutain: So far, we do not have official plans to release it for Xbox One. The choice has mostly been driven by the support Sony can give us as independent developers, which really helps us.

Leonid Meikhov: Is there anything else you want to tell us about the game?

Romain Toutain: We really hope people will enjoy it! We put a lot of ourselves in it, and we are making something original, and hopefully players will find it good.

Manuel Ruiz Dupont:Craziness and fear of Kodoku will make you happy.

Burundanga: Those two are driving me crazy!