I’m generally one of those kind of guys who gets on very well with Japanese culture. I’ve watched my fair share of anime over the years, and have always found the quirky sense of humour rather charming. Even I have my limits however. I load Kung Fu Rider into my PS3 only to be greeted with a youthful woman waving her ass about as she rides downhill on an office chair whilst overacting some potentially offensive pseudo kung fu moves. It’s one of the few moments where I have been honestly lost for words. Is it meant to be funny? Is it meant to be ironic? I don’t even think the developers knew as they designed and coded this absolute stinker of a game.

The general scenario sees you control either Tobin, a geeky looking private detective or Karin his assistant, as they escape from the Mafia for some unexplained reason. It all makes absolutely no sense and is generally poorly explained, and by the time they decide the quickest way to escape would be by riding on office furniture you know that any attempt to retain logic has been completely thrown to the dogs. Add some frustrating characterisation and a female protagonist that is so overtly sexualised it actually made me feel slightly uncomfortable and you have a real blight on the mental faculties. 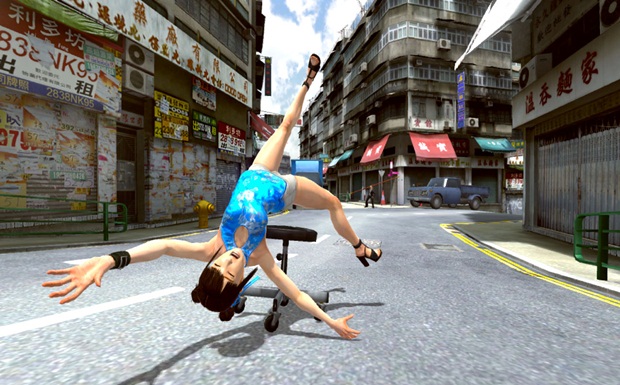 The overtly sexualised female protagonist made me slightly uncomfortable. Not to mention she’s quite obviously a Chun Li clone

Speaking of that which has no sense or reasoning, I seriously need to rain some pain on the control method in Kung Fu Rider. Of all the titles released so far that are compatible with the PS move, Kung Fu Rider has got to be the one with the most tacked on controls by a mile. The game could’ve easily been controlled using a standard game pad, and I would even go as far as to say that I would have much preferred it. You need to angle you’re controller to alter your direction yet, as if the over-sensitive turning mechanisms weren’t annoying enough, the developers also saw fit that they would map multiple actions to a single movement. For instance you need to shake the move controller up and down to continually push your chair and maintain your speed, but flicking the move controller up causes you to jump in the air. Another clear indication that no thought was put into this abomonation. 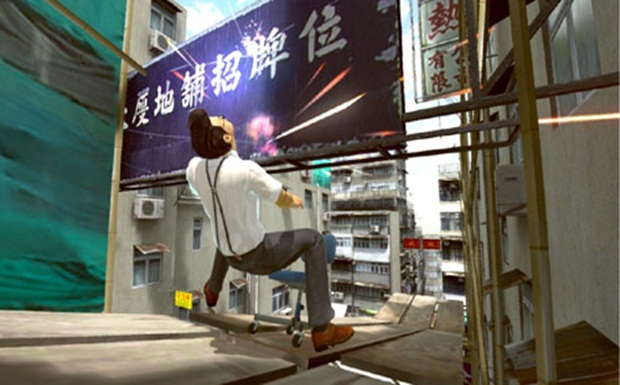 You think he’s hitting his head on that sign, but it’s actually one of the many invisible walls that plague Kung Fu Rider

So far so good with an arbitrary story and a devilishly poor main game engine. What more could possibly go wrong? How about the linear and repetitive level design? I know that complex, winding paths and multiple routes don’t just design themselves out of thin air, but it honestly feels like no effort has gone into this aspect of the game. What’s worse is the lack of direction you’re given as to which route to take to clear the course. The only thing preventing you from taking the wrong turns are a myriad of invisible walls that plague and destroy nearly every level of the game. Yes, that’s right invisible walls. In 2010. I know this is a budget release, but really? Invisible walls? Few things in this world frustrate me in such a way but it seems that Kung Fu Rider knows exactly which of my buttons to push.

On the plus side at least the game is presented rather well. The graphics are bright, with a rich colour palette that accentuates the comical over the top nature of the proceedings. It’s just a shame that we can’t judge this particular book by its cover. Sound isn’t quite as polished across the board as, even though the music is chirpy and enjoyable enough, the voice acting is poor and delivered in an amateurish manner and the sound effects are repetitive and limp. 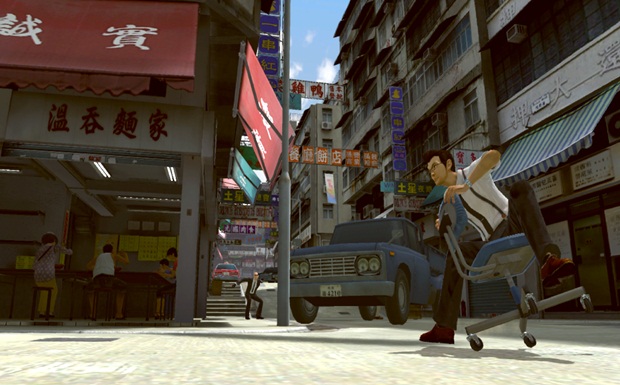 Because a desk chair is apparently a sensible method of transport…

The move (pardon the pun) to sell the Playstation Move’s launch titles at a budget price is certainly a good one by Sony, but a cheaper price tag isn’t enough to make Kung Fu Rider a sane purchase. The boring and repetitive nature of the game’s levels make the amount of content on the disc irrelevant. You will be easily bored to tears within minutes of putting Kung Fu Rider in your console and a paint by numbers multiplayer and uninspired trophy list are not enough to change this. Bottom line is that Kung Fu Rider is the kind of thing that should have remained little more than a tech demo for the PS Move. Nothing about the game makes sense, and I mean this in the worst way possible. Kung Fu Rider is a waste of both your time and money. Don’t give this lecherous wallet parasite a second look. Ignore, ignore, ignore.

Final Verdict:
POOR
A pointless sense of humour, lame motion controls and some retarded design choices prevent Kung Fu Rider from being anything more than a disappointment
A copy of this game was provided by Developer/Publisher/Distributor/PR Agency for review purposes. Click here to know more about our Reviews Policy.