L.A. Noire is a game that will be remembered for a very long time for various reasons. But if there is one thing that gamers and the industry as a whole will probably never forget about the game is its effort to bridge the gap between reality and video games. Whenever a game is announced by a well known publisher/developer, they always boast how realistic it will be and how it will change video games forever. L.A. Noire is perhaps one of those rare games that actually live to what it was developed for.

The game takes place in the 1940’s Los Angeles, an era where the World War II has just been done with and the city is now flourishing, providing people with a host of opportunities to settle down and become rich & famous. But the city also hides a dark history of drug smugglers, murderers and insurance scams. Keen to keep his city safe and clean, Cole Phelps, a former Marine Lieutenant who had fought in World War II comes down to Los Angeles and joins the L.A.P.D. Throughout the game, Cole uncovers several mind boggling cases which are connected together. So Cole might actually charge sheet a couple of persons for different cases but in the end the player will discover that the culprit was someone else. The game also takes a look at the controversial life of Cole when he was a Lieutenant during World War II. This is told via a number of flashbacks that appear between missions hence giving the chance to the player to learn more about Cole’s back-story which may or may not be connected with the detective missions that the player will have to go through the game. 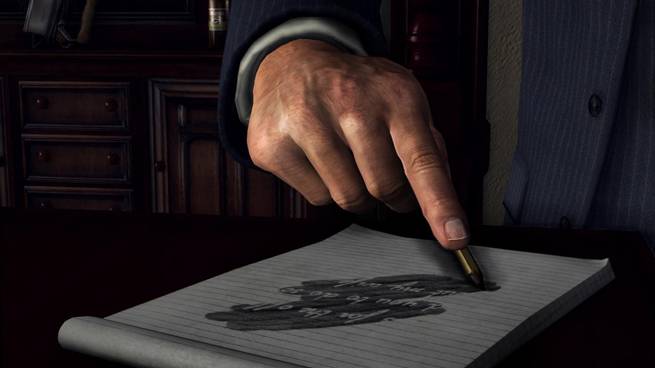 So when the actual gameplay begins, you will undertake missions on the Patrol Desk. Now for people who are not aware of the crime sections, a Desk is nothing but a categorization of the crime. For example, during the last half of the game Players will be assigned to the Arson Desk which will feature cases related to people/houses getting burnt. There are five types of Desks in the game and each of them will have a different set of characters that will accompany Cole. Some of them are downright funny or some are no non-sense type.

Each of the cases begins with a general discussion at the Police Headquarters among Cole, his partner and the superiors. Thereafter Cole will have to travel with his partner to the crime scene and this is where the interesting part begins. At the crime scene Cole will have to find clues that the culprit may leave behind or find things that may lead him to bring on some conclusions. For example, in one of the murder cases we could interact with the victim’s body, blood marks on the wall, check the victim’s purse and do several things. Whenever Cole enters a crime scene, music will be played and as soon as the player lands over some clue the controller will vibrate.  This feature can be turned off via the options menu which could result in to some really brainy detective work and take the game to an altogether different level. Once you have found all the clues, a final music will be played. Then depending on the situation, Cole can interrogate a witness or in LA Noire’s case: Person of Interest. Now during interrogation the players will grill the POI with some intense questions, all highlighted by some insane motion capture technology built by the talented people over at Team Bondi. 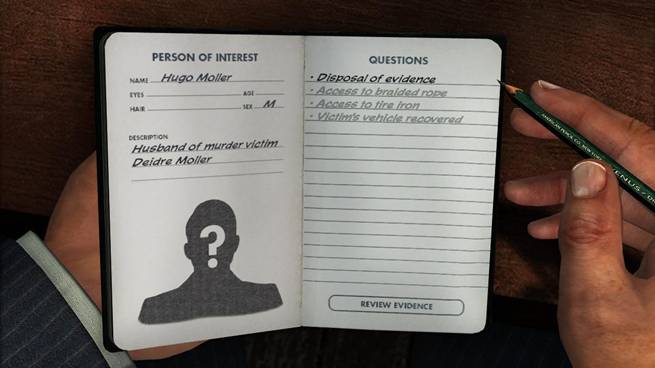 Your handbook is indeed very ‘handy’

During interrogation POIs may lie, say the truth or give an answer that lies somewhere in between. This is where the player has to judge based on the POI’s body language. For example a person may be lying if he/she is not watching eye to eye or is fidgeting around. The player will be given three options for each answer the POI gives: Truth, Lie and Doubt. The player has to select an answer among these and if you think that the POI is lying, you have to present a proof using your handy handbook. The most amazing thing about the Motion capture engine is that it gives the player so many expressions that they might get confused. Some people give it away straight away by their expressions and some are pretty tough to break through and make act naturally. So ultimately it all depends on the player to judge since the human muscle is made up of thousands of expressions. Players can also use intuition points to remove an answer which is nice inspiration from the hit shows like Become a Millionaire. Intuition points are earned by closing cases and can be used to chop off one option during questioning or can be used to display all clues on the map during a crime scene. Even better is the addition of a social element to the game. Players can refer online about the most popular answers from all the gamers who bought a copy of LA Noire. After covering cases after cases in L.A. Noire, the players can rise through the ranks. For each case, players can earn XP and level up all the way to Level 20 and earn more intuition points, although you can only keep five intuition points at a time.

During cases you will come across several situations where you have to take on the bad boys either hand to hand or by guns. Although the gun combat is pretty satisfying and is similar to Red Dead Redemption, the hand to hand combat is funny and at times embarrassing. But users need not to worry since these parts are few and far between. There is also some heart pounding on foot and car chases which might take place during the crowded hours or over some film set. The chases are intense and are a crucial part of the cases, not to mention they add a bit of variety in the gameplay. Eventually when you are about to close a case, you have to bring in the suspect/s in to the Head Quarters and make them confess or charge them directly. 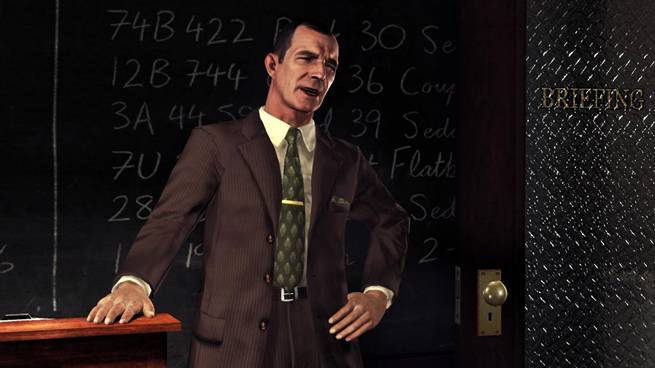 Mo-cap tech is second to none.

The world of L.A. Noire is pretty big and since it’s coming  from Rockstar people might mistake it for another Grand Theft Auto. Yes it is open world and yes it has a ton of pedestrians to run your vehicle over them, but you simply can’t. You are a government official and should you damage any cars or private/public property your end of the case report will get affected. If you are a Grand Theft Auto type player and start killing pedestrians the game will simply end, plain and simple. During travelling from one location to another, you will get calls from LAPD to address on the spot crime scenes like car accidents or taking out a mad man who is shooting at people. All in all the gameplay is pretty solid and will take the players close to 30-40 hours if the player is eager to complete the side missions as well.

L.A. Noire is a visually appealing game, even though the frame rate drops when the fights/chases get intense. Of course it is no Uncharted or Gears of War but the motion capture technology is second to none. Even the slightest muscle movement, the grin and the eye wink all look impressively realistic. I can see many game developers taking a leaf from L.A. Noire and upping their game as far as the mo-cap technology is concerned. The 1940s Los Angeles has been wonderfully designed representing a developing America and its people. The voice acting is easily the best in video games and since L.A. Noire is a detective game I expected nothing less. Cole Phelps is one cool guy but the characters who accompany him during cases are the best of the lot. As I mentioned above some will be funny, full of them or even back stab you if the need arises.

L.A. Noire is a very important development in video games because it has taken one huge step in bridging the gap between realism and video games. Even though the game may get repetitive and start slow for some players, the last half of the game is truly engaging and uncovers some dark and unexpected secrets. If you want to take a look at how far video games have come across then you don’t need to look far. Just stop reading this review, go down your retail store and buy this superlative game from Team Bondi and Rockstar. Enough said.

: Phenomenal motion capture technology, Voice acting is perhaps the best in video games, Interrogation and detection mechanics have been implemented very well, Heart pounding car and on foot chases, Excellent representation of the 1940s Los Angeles and a plot that will suck you right in.

Hand to hand combat is hilarious (in a bad way), Frame rate issues, and the game “may” get repetitive for some players.

Final Verdict:
EDITOR’S CHOICE
L.A. Noire is a landmark achievement, bridging the gap between reality and video games.
A copy of this game was provided by Developer/Publisher/Distributor/PR Agency for review purposes. Click here to know more about our Reviews Policy.