Nippon Ichi tries its hand at the dungeon-crawling genre with favorable results.

The dungeon-crawling genre has always been a niche joy for its dedicated fans. Taking all of the elements of a contemporary RPG and stripping it down to its most bare essentials isn’t to everyone’s taste. In order for these types of games to really stand out in today’s market, they need to be done well and they need to have special care put into them. So what happens when a long-standing and acclaimed studio decides to put their own twist on the dungeon-crawling genre? 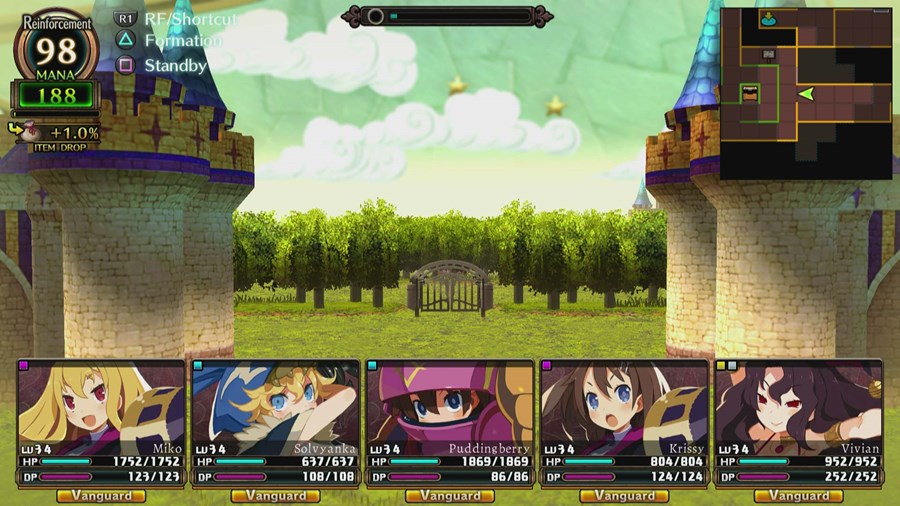 "Labyrinth of Refrain: Coven of Dusk is Nippon Ichi’s first attempt at an old-school dungeon crawling RPG. And for a first attempt, it’s a pretty good time."

Labyrinth of Refrain: Coven of Dusk is Nippon Ichi’s first attempt at an old-school dungeon crawling RPG. And for a first attempt, it’s a pretty good time. This game’s story is simple. There’s a town called Refrain that has a cursed underground labyrinth that no human can survive in for very long. A witch called Dronya comes to town in order to help explore it and defeat the monsters below. Since she can’t go in herself, she has a magic book with her that she sends in along with an army of puppet soldiers that she creates. You actually play as the book in this game and lead the puppets through the depths. It’s an interesting twist and I can’t say that I’ve ever played as a book in any other game before.

The tone of the game varies from moment to moment. Characters are all essentially but they sometimes end up revealing some hidden depth for brief moments. There are points where the story can be pretty somber but it can just as easily crack a dumb joke or throw a bit of fan service at the player. It’s not exactly high art, but it is interesting and the moments of light-hearted fun keep the heavier bits from becoming too self-indulgent.

The game looks great. Everything is represented using a polished 2D art style that can really be quite stunning. Characters have the crisp designs that Nippon Ichi is known for. Some of the monsters especially look great, with some illustrations rivalling even Vanillaware’s work in terms of detail and personality. Most of your time with the game, you’ll be looking at stills of characters, whether that be during story cutscenes or gameplay. This may be disappointing to those expecting a more lively presentation but it’s hard to complain when the artwork on display looks so good. Music is a good time too, with a heavy emphasis on catchy guitar synth riffs and steady pulsing beats. You may end up getting tired of the music that plays while you explore but it’s entertaining while it lasts.

Gameplay in Labyrinth of Refrain consists of creating an army of soldiers and exploring deeper and deeper into the labyrinth. You’re given an extreme amount of control over the customization of your soldiers, down to their personality type and nickname. Some of these seemingly unimportant choices can have long-standing effects on your soldiers and it’s advised to keep experimenting with new types in order to learn all about the . Some of these hidden stats are pretty vague and more or less require you to look up a wiki explaining them. They’re just as easy to ignore but you’ll probably want every advantage you get during your time in the labyrinth. 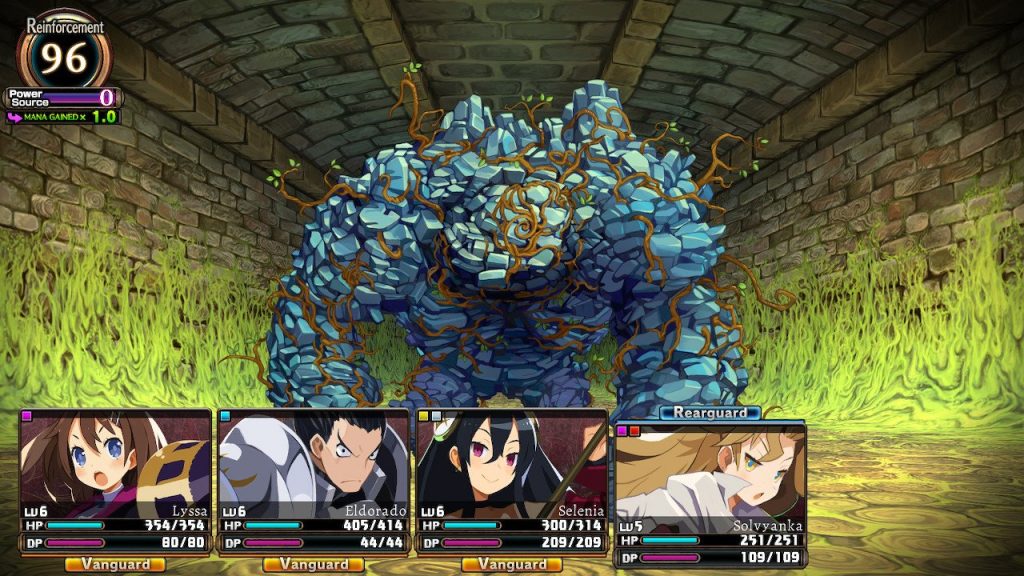 "Exploring the labyrinth is fun as long as you know what you’re getting into. The labyrinth is not detailed at all, with identical-looking hallways and rooms all throughout it. Even though new areas with have a different aesthetic, you’ll still be looking at similar looking environments for most of your playthrough."

The soldiers also come in six classes. You’ve got your standard Aster Knights. These are your foot soldiers, nothing special but necessary nonetheless. They’re somewhat slow, but they can pump out good damage. The Shinobushi class are your stealthy assassins. They focus more on quick attacks and agility but really can’t take a hit very well. Theatrical Stars heal every turn and they are also in charge of status ailments. The Peer Fortress puppets are your tanks. They can take a hit and protect allies. And finally, the Marginal Maze buffs up ally attacks and can also put out a good bit of damage themselves. There’s also a few other classes that unlock later on in the game that are fun to try out. Experimenting with team composition and figuring out what classes work best with one another is part of the fun of Labyrinth of Refrain. Even though you can get through a good amount of the game with just a damage dealer, a tank, and a healer, you won’t be able to just coast through the game forever.

You explore and fight all in a first-person viewpoint. For contemporary examples, this is similar to Persona Q and the Etrian Odyssey games. So you’ll be taking dozens of your soldiers into battle all at once, eventually being able to take a maximum of 40 soldiers. In order to streamline this, they’re sectioned off into covens where multiple characters can make up one “character slot.” This way, you only give orders to a group of allies at a time instead of individually picking every action for all of your characters. Battles are mostly engaging but some random encounters end up devolving into tedium where you’re not using strategy but instead are just button-mashing to make it through the fight. The boss battles are where you’re going to find most of your challenge. Labyrinth of Refrain isn’t incredibly hard but it does have a good challenge for newcomers and veterans alike.

Exploring the labyrinth is fun as long as you know what you’re getting into. The labyrinth is not detailed at all, with identical-looking hallways and rooms all throughout it. Even though new areas with have a different aesthetic, you’ll still be looking at similar looking environments for most of your playthrough. There are mana veins scattered through the labyrinth as well as treasures that you can find hidden away. You also have the ability to break through walls of the labyrinth and create your own path at the cost of some resources. There are plenty of traps and hazardous areas that you’ll end up stumbling into plenty of times through your adventure. Even though they add tension to exploring, the traps can end up adding more tedium due to how random they are at times. Nothing can make your heart sink faster than when you get far into the labyrinth and then fall through a hidden hole in the ground and have to start all over again.

There are issues though. All too often, Labyrinth of Refrain will gate you from proceeding further into the depths by issuing some sort of requirement from the player. Sometimes, the requirement is fair and you’ll naturally come across it if you’re exploring and fighting. But sometimes, the game asks ludicrous demands of you, like finding a large number of randomly-generated item drops. This can sometimes grind the pacing to an abrupt halt. And even though you receive sporadic story elements during your journey, there’s a lack of incentive to continue your journey into the labyrinth. Your reasoning for exploring more of the depths is simply the thrill of exploring more of the depths. This isn’t a huge mark against it, but since this is trying to emulate old-school dungeon crawlers, it should be said: story is definitely not the focus here. 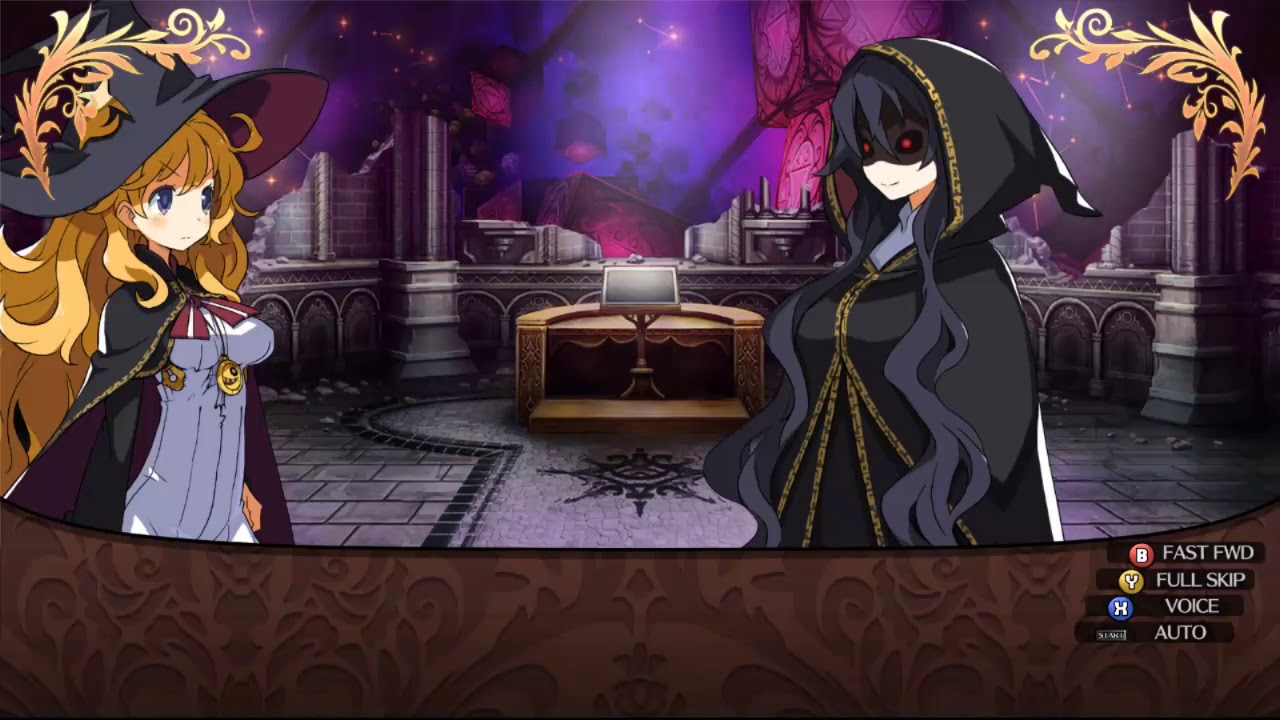 "Labyrinth of Refrain: Coven of Dusk is a good time for those looking to get lost in the depths for a long time."

Labyrinth of Refrain: Coven of Dusk is a good time for those looking to get lost in the depths for a long time. For those of you who enjoy this type of game, there’s plenty of it here, with a playthrough taking about 60 hours. Then after that, there’s tons of post-game content with even harder bosses waiting for you. And with Nippon Ichi’s signature touch and charm, this is an adventure worth delving into, despite its shortcomings.

Labyrinth of Refrain: Coven of Dusk is a great time and provides a few twists for players who want something new from their dungeon-crawling adventures.

A copy of this game was provided by developer/publisher for review purposes. Click here to know more about our Reviews Policy.
Tagged With: labyrinth of refrain: coven of dusk, nintendo switch, nippon ichi software, pc, ps4