It has taken me a few days of thinking before I forced my self to buy this game, as I have to purchase carefully to keep my ‘good game intake’ > ‘current financial capital’. I read tons of comments on YouTube that said Lead and Gold was one of the worst games fifteen Dollars has to offer, I must say that after watching all of the video’s and reviews online I was timid to say the least on forking over my hard earned money on something that was most indefinitely going to stink up my entire house. Regardless, I needed a game fix pronto on a late Sunday evening and my unquenchable thirst for shooting people was prodding at my cranium like a pissed off head crab.

Lead and Gold has been catching a lot of flak for its “Team Fortress 2” comparisons, when juxtaposed are seemingly very similar, there are a few things that set the titles apart. Being a hardcore TF2 player, and even participating in the competitive aspect of TF2 on the PC, I was able to make the distinctions between the titles. Let me start off by saying that if you like Team Fortress and you’re looking for a nice waist of time game that will give you a few cheap hours of entertainment, Lead and Gold is for you. On the contrary, if you’re looking for the multi-player experience that TF2 brings to the table then you’re just not going to find it in Gangs of the Wild West. 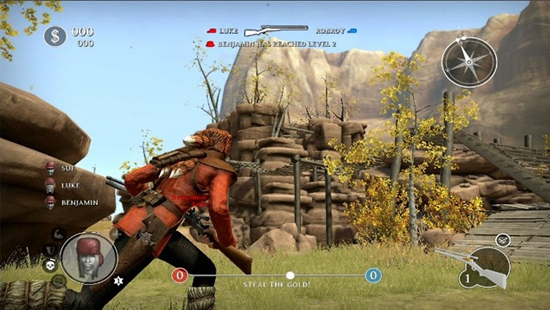 Trapper sprinting for the hills.

I can’t say that this game is not worth the money. 15 Dollars for a game that I still have yet to grow sick of and actually has decent visuals and game play mechanics, makes me wonder where all the negative focus  is being generated from. Playing; I felt as though the physics where set up very nicely, everything seemed to be pretty smooth. There where only a few minor issues I had, but nothing to sway my decision on this game as to whether it is buy worthy or not.

Running around the maps trying to learn the levels is very simple; in fact the learning curve on Lead and Gold is almost without doubt a flat liner. The object is easy in most of the different game types which include the most standard ‘shoot em up’ game modes. “Greed” game mode is probably the one that I have spent the most time playing, apparently bags of gold or “Intel” are defended by one team, and desperately needed for greedy western gunslingers by the opposing team. There is also conquest and team death match. 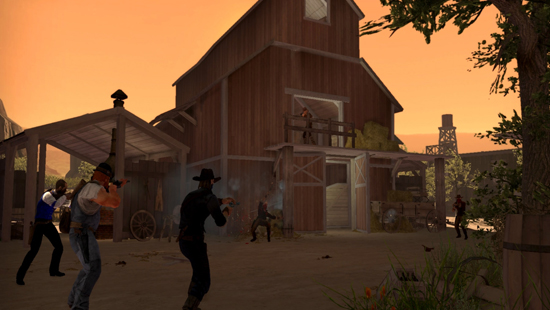 Co-Op Mode, Holdin’ down the fort.

Each class in the game has his or her unique abilities that will help the team as a whole. The gunslinger is a fast pistol wielding cowboy that is great for in your face close range action. The trapper is a female character that well, sets traps. She lays down steel bear traps and is packing a high powered rifle for long range action. The Blaster is a bulky mountain looking man that totes his shotgun around and throws sticks of TNT to blow his competition to smithereens. The Deputy, my favorite I might add, is a mid ranged repeating rifle class, which is great for overall domination of the arena.

All of the characters have a secondary pistol and a special ability. Some of which include healing, bonus damage/defense, and tagging enemy’s for the rest of your team to see. Lead and Gold has a unique and fairly un-modernized ranking system. Instead of ranking up your player profile, you rank up your characters individually each match. Some players that are more into casual gaming will probably frown upon this, I personally like the fact that the standard for player ranks and bragging rights are null in Gangs of the Wild West. Ranking up in game is a good way for you to increase your special abilities (synthetic energy) or as I like to call it a battlefield anomaly. As you can tell, this is a very team based game. 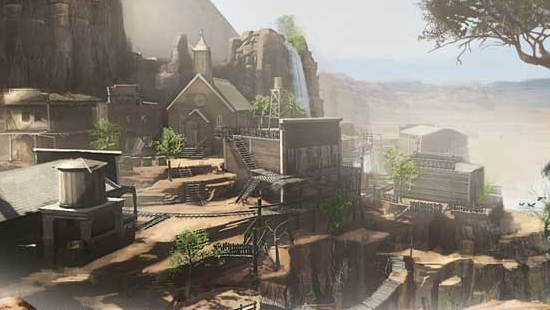 A Lead and Gold Landscape, welcome to the west.

The acquisitions that Lead and Gold runs poorly, and has a less than adequate game engine, are completely and utterly erroneous, after running the game for more than two plus hours I had found only one technical error that is easily avoided. Running and jumping is natural feeling and there is not a whole mess of model clipping through objects or anything of that nature that I was able to pick out.

The multiplayer community seemed quite friendly might I add. There are a lot of times when certain games that involve high stress situations such as shooting people can lead to a lot of trash talking and slander. While playing I ran into a few nice folks that where very helpful and communicated in a positive way, not to say there wont be one bad apple every couple of games, but for the most part it seems like the TF2 community.

Along with communication comes team-work. Lead and Gold is a very team based game, and most casual gamers are not fully devoted to the multiplayer experience of team based missions. In Gangs of the Wild West, it’s nearly impossible for a team to win any multiplayer game like greed or conquest without working together. There is always a nice blend of classes that makes your team strong by including all of the special features from each character. It’s as easy as, players helped me without needing  to be ask so I returned the favor in the true spirit of multiplayer co-op. 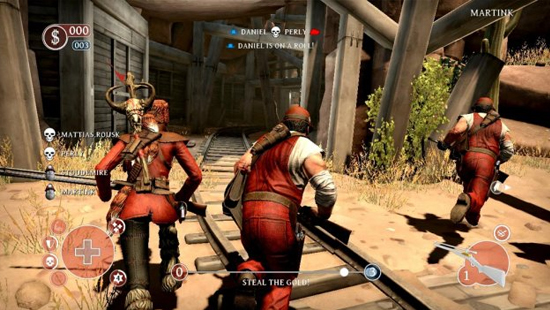 Lead and Gold also has a multiplayer co-op feature, where you and an online team-mate join forces to fight off swarm after swarm of cowboy bots. I haven’t had a lot of time to mess around with this game type as it is obviously the less popular of the game modes, but it brings chilling memories of the Modern Warfare 2 co-op experience. In fact Gangs of the Wild West seems like a multiplayer game mash up including; Team Fortress 2, Call of Duty, Left 4 Dead, and Socom.

The flow of Lead and Gold, as in how all of the players and classes fit with each other, is great. When everyone is working together and fighting for the same goal or outcome, it feels like a game that could really go somewhere with a few updates and patches. I feel as though the game is in need of a new class and a few new maps but other than that, it’s a great start to a hopefully wonderful franchise. I’d like to see a 2nd installment if they don’t release any DLC in the near future.

Other than the game just now releasing, I think it shows a lot of promise and potential. Personally I love it and will continue to play it. Those who have expressed so much negativity towards this game are in fact looking for something else, and most likely going into it with the wrong mindset that a fifteen dollar game deserves. Overall I’d have to say that this is a buy, go get it instead of that large pizza, you’ll thank me later.

Fun game play with a small amount of replay value. Decent visuals that are a great start for a promising game. Sounds are good and the action is intense.

The maps are a bit plane and unoriginal. Has a feeling of being unfinished and has great potential with a few large updates.

Lead and Gold is a great title for $15. If you enjoy playing Team Fortress 2 and or Left 4 Dead, then this is a close western mock-up. One of the best Indy games I have played since Fat Princess.

A copy of this game was provided by developer/publisher for review purposes. Click here to know more about our Reviews Policy.
Tagged With: Lead and Gold: Gangs of the Wild West, PlayStation 3