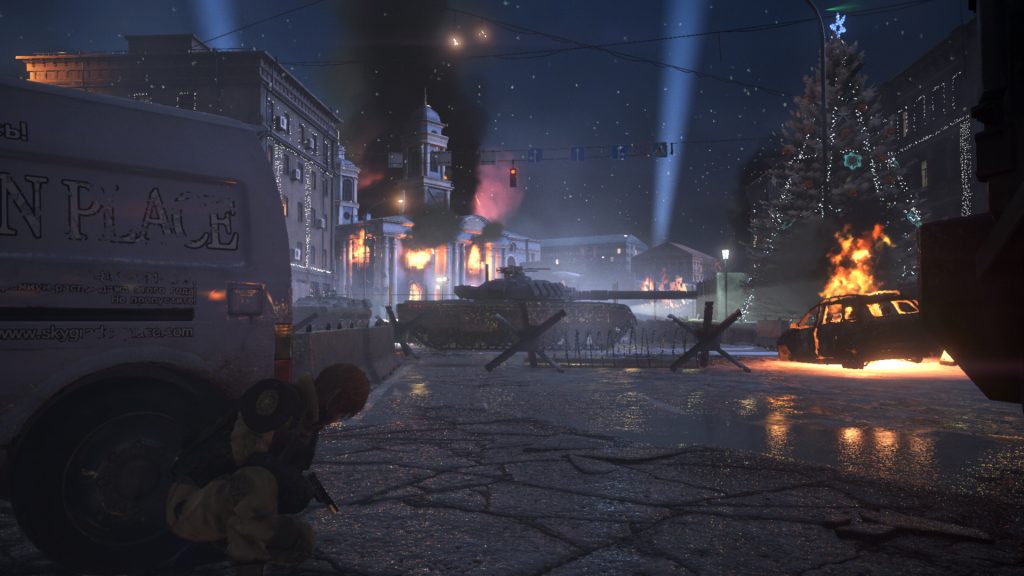 Left Alive is being described by Square Enix as quite a hardcore yet satisfying game, and it looks great in the screenshots we’ve seen of it so far. At Gamescom 2018, the game’s Director Toshifumi Nabeshima and Producer Shinji Hashimoto spoke to DualShockers,  and shared a lot of interesting details regarding the game, including about its combat, crafting, stealth, and lots more.

First of all the developers explained why the game doesn’t have “Front Mission” in its title, even though it is set in the same universe- it’s because the development team team is different, and they will be taking this game in a new and different direction. The game is a third-person shooter, but it will be different in a number of ways from the games that we normally see in the genre. There will be three playable characters who are trying to escape a city where war suddenly breaks out.

Left Alive will not be a simple shooter, according to its developers, and players will have various choices in how they approach a situation, which means stealth will play an important role in the game. In fact, players can’t just depend on shooting, since they may not be able to hold their own in some situations. As such, they will have to make use of things like traps and trip wires to defeat enemies.

Crafting will play a crucial role in the game as well, and players will be able to create equipment to make things easier for themselves in the game. Players will have lots of tools at their disposal, including stuff like radars to pinpoint enemies’ location. If you do want to just focus on shooting, though, you will be able to survive if you are able to take out enemies without using up too much ammo- which means you need to be better skilled at shooting. The game emphasizes experimentation so that players will try different methods to succeed.

There will also be the mechas known as Wanzers in the game, and players will sometimes just be put in control of them. At other times, players can try and steal them- but they are heavily guarded, so it may not be worth the risk. In Left Alive, you will also come across some other characters, obviously, and you can choose whether to help them or not, and your choices will affect how the game’s story plays out. Of course, the civilians aren’t all good characters, and you will have multiple choices regarding how you deal with them. At the end of the game, you will be able to see what happened to all of the civilians you were able to save.

As of now, most of the game’s content is done, and the developers are focusing on balancing and polishing up the game. Left Alive is set to release for the PC and PS4, but no release date has been revealed as of now.