Lego Batman 2 comes to Wii U after a full year gap. Is this delayed port worth it?

Lego games have a formula that works. Take on an existing popular property, give it a Lego twist, wrap it up in oodles of charm, back it up with some solid if predictable gameplay mechanics, and then bam, you’re good to go. Whereas the amount of Lego games in recent years has gone alarmingly up, the quality has by and large never faltered.

Last year, Warner Bros. released Traveler Tales developed Lego Batman 2: DC Heroes, the sequel to the fairly average Lego Batman from a few years back, and they perfected that formula to a fever pitch. The game was incredibly charming, with some great, well thought out gameplay mechanics, and peppered with so many references to the DC universe, it was a delight to play through. Now, one year after the original game’s release, Warner Bros have gone ahead and, bafflingly enough, released a Wii U port.

That might come as a puzzling move to most at best, especially given that the original game was already released on Wii. Is Lego Batman 2 on Wii U a cheap cash grab, a poor port at best like so many others on the system, designed to just extract money from consumers? Or did the developers actually take the year long interim to perfect the game for the new hardware? 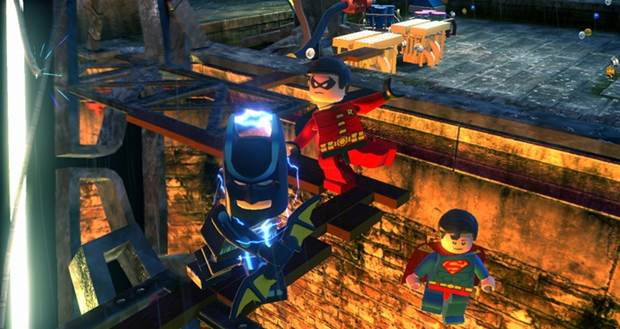 Let’s start right at the very beginning first, though. The premise of this game, as with all Lego games, is suitably silly and over the top. Based on multiple comic book men wearing spandex tights, and wrapped in a Lego exterior, the game, marketed as it is to children, was never going to be another Arkham Asylum or Arkham City anyway. However, DC Super Heroes is extravagantly, gleefully, ridiculously exaggerated, with little to no exposition provided to justify the team up of Lex Luthor and the Joker, as well as multiple DC super heroes teaming up with Batman and Robin.

This decision to not provide any sort of context to the story or events happening in the game is in spite of a clear spike in the game’s production values. The entire game is now voiced, for instance, and it puts you in an open world that is a joy as a Lego themed playground to mess around in. Simultaneously, the graphics have an all new sheen to them, looking rounder, smoother, sharper, more defined, and just shinier.

Lego Batman 2 shows some clear reverence for its source material. Perhaps as much as the Batman Arkham games, developers Traveler Tales have packed this game with multiple easter eggs and infinite nudges and mentions of the expansive DC universe, going above and beyond the call and including multiple characters in prominent roles when perhaps most of the target audience doesn’t even know of their existence. It is a game that prides itself on its comic book heritage, and it is a game that tries to capitalize on it by trying to familiarize the newcomer to said heritage, and providing plenty of material for the veteran. 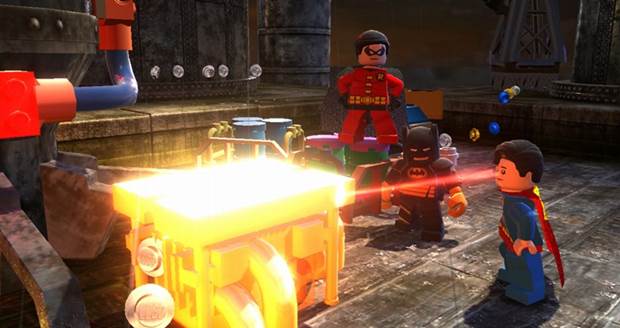 Take, for instance, the music. Utilizing both the classic John Williams Superman track that blends in seamlessly with the iconic Danny Elfman scored original Batman theme as you take control of the titular DC heroes and scale the rooftops of Lego Gotham, the music is sure to stir some nostalgia within any comic book enthusiast, especially a DC enthusiast.

Lego Batman 2 is reverent about is source material, and it revels in that. However, contrary to the recent trend of moving towards the grittier, darker, edgier side of comic books, fueled in fact by none other than Batman himself, Lego Batman 2 is childish, cartooney, naive, with all the oodles of charm and the innocence of a Nintendo game, which works wonderfully well in this instance. And unlike most games, that manage to nail down charm similar to Nintendo games, but can never quite master the game design (an important part of what makes Nintendo games so appealing to everyone- including kids- in the first place), Lego Batman 2 has it all nailed.

I’ve spoken already about the open world city. I have spoken about the twist to traditional open world mechanics that the infusion of Lego conventions adds to the game. I have spoken about the developers going unexpectedly above and beyond what was necessary or required of them, including in this regard- the fully featured day/night cycle, the random weather, and the AI behavior are all testament to that. It is a compliment rarely given, but Lego Batman 2 is a gem of a game, expertly designed, such that it’s hard to really fault it for anything. And if the really discerning eye does catch anything perceptibly out of place, the game’s heart and its charm are sure to smooth out that frown on your face. 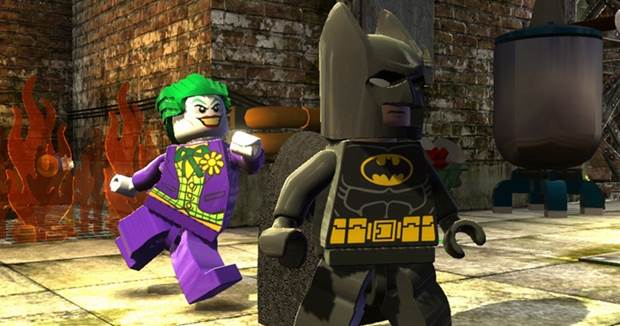 Returning to the open world- it’s the meat of the game. The story is, as remarked previously, unabashedly silly, but the game almost makes a conscious attempt to sideline it and quickly brush it off, racing to its conclusion (which can take a hefty dozen hours, by the way), before presenting you with the true Lego Gotham city, with hidden nooks and crannies, which can only be explored and unlocked by using the appropriate characters’ abilities, sometimes in conjunction.

There are additional villains to be hunted, there are free play missions that involve you saving the adorably trouble prone Gotham citizens, there are old story missions to be replayed with new characters. And if you’re just bored, and just want to muck around, you have a seriously enormous city to just wander about in. This game is massive, and by the end, you’ll probably have justified its value to yourself several times over.

Oh, and as for the other characters: there’s Batman, of course, as there is Robin. And then there is Superman, in what is perhaps his best video game incarnation to date. There are also other Justice League members: Wonder Woman, Green Lantern, Flash, all the usual suspects. By the end, you’ll have a veritable army of superheroes marching around at your command, in all their Justice League glory.

All of this incredible game design- which after all, you can already experience on other platforms (including, as stated above, the Wii) for much cheaper, is well and good, but it is also complemented by some incredibly well done Wii U exclusive features that make this one a hard ask to pass over if you’re a fan of these games.

For starters, for instance, is full support for Off TV Play, which works better for this kind of game than you’d think. Hand the controller to your kid and let him play the game there, while you finally get the TV to yourself. for instance. There is also a really well done Lego City Undercover inspired map and always on menu on your Gamepad touch screen, which comes in handy in traversing the open world. 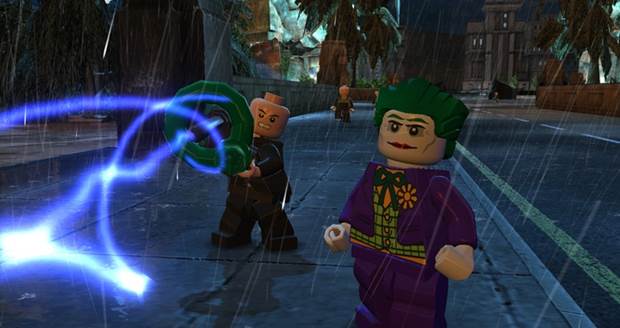 Of course, all of these neat new Gamepad features come at a cost- in what is increasingly becoming a trend with Wii U ports these days, Lego Batman 2 here does not have any of the DLC that the game has received on the other platforms over the last year. Of course, most children probably won’t know or notice the difference, and you might not even care if the Gamepad features are enough to compensate for you, but it is something to keep in mind, especially considering how uniformly good the DLC has been

When you buy this game, you know what you’re getting: you’re getting all the varied and yet familiar gameplay concepts the Lego games have cultivated over the years repackaged in a new setting, a new scenario, with familiar properties, bundled in with lots and lots of charm. In that respect also, the Lego series resembles Nintendo’s brand of video game making a lot.

That is not praise to be lightly bandied about, and yet here I am, consciously having made that comparison twice in the course of this one review. But that is just how good Lego Batman 2 is. Charming and inventive, ridiculous and over the top, exaggerated and reverent, familiar and unexpected, Lego Batman 2 is that rare game that comes every once in a while that actually manages to transcend all demographics and appeal to everyone all at once. 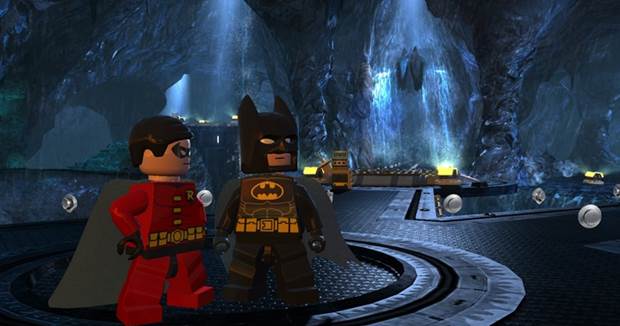 Yes, it has released a year late, and since then, there have been many other Lego games for you to try, including the Wii U exclusive Lego City Undercover. And yes, if you were so inclined, you could get this game, and all its DLC, for an equivalent price (or less) on another platform. That in itself makes this a tough proposition to recommend. If the Wii U exclusive features are up your alley, though, and if you want to experience that Nintendo brand of charm on your new Nintendo console, by all means go for it. This is still a great game, even a full year later.

Incredible amount of charm; lots of reverence for and references to its source material; the entire Justice League cast is eventually playable; ridiculously over the top; some incredible production values; unexpectedly full featured, with a massive city, and several dozen hours' worth of content; the Wii U pad and functionality has actually been utilized very well

The story is silly; the gameplay mechanics might seem a bit familiar to anyone who has played previous Lego games; it's a delayed port, so it's available on other platforms for much cheaper at this point; none of the DLC is included

Final Verdict:
SUPERB
It's not the most appealing value proposition, but it's a great game even now, and one you should certainly consider getting for your Wii U if you haven't played it already
A copy of this game was provided by Developer/Publisher/Distributor/PR Agency for review purposes. Click here to know more about our Reviews Policy.