LEGO Brawls Review – Nothing Of Note

The LEGO games have mostly been geared towards a specific audience, and by continuing to focus on that niche – this brand of simplistic games has endured for so long. That said, some games in this overarching franchise such as the likes of LEGO Star Wars feature gameplay mechanics and competent storylines that end up being a fun time for players of all age groups and skill levels. But Red Games’ latest LEGO Brawls isn’t one such game; it’s a cheap knock-off of similar games that doesn’t have any depth in its mechanics or variety in its gameplay – culminating it a surprisingly shallow experience through and through.

A point to note here is that LEGO Brawls isn’t a new game; it’s a console and PC port of a mobile game that was released back in 2019. So, if you gauge it with regards to its target demographic and original platform – LEGO Brawls can be an acceptable game despite its many flaws. But on console platforms where there are so many great contemporaries available, it simply falls flat on its blocky knees.

" But on console platforms where there are so many great contemporaries available, Lego Brawls simply falls flat on its blocky knees."

Upon booting LEGO Brawls for the first time, you are greeted with a short tutorial on how the game works. There’s a single attack button that you can use to hit your enemies alongside a jump and a dash button to crawl out of harm’s way. Apart from that, there are two special slots each of which holds a power-up that you can take from the arena. And that’s all there is to the combat loop, in case you were wondering.

There are two major modes of play in LEGO Brawls – a Brawl mode and a Party mode. The Brawl mode is basically quick play in online mode, while the party mode allows you to play with friends through local couch play or online through an invite code. Regardless of whether you play in Brawl mode or Party mode, there are only two basic match types to choose from – a free-for-all brawl and a team-based objective mode.

The free-for-all is your standard affair – you pick a stage and the number of lives for each player and duke it out against the backdrop of a stage. The stage itself is littered with constantly respawning power-ups, which you can use to wreak havoc upon your enemies. Each downed opponent will restore your health bars, and the last man standing is the winner. Then there are team-based battles, where teams of 4 compete against each other for a common objective that can be anything from collecting x amount of Peaches to capturing a control point to something else. 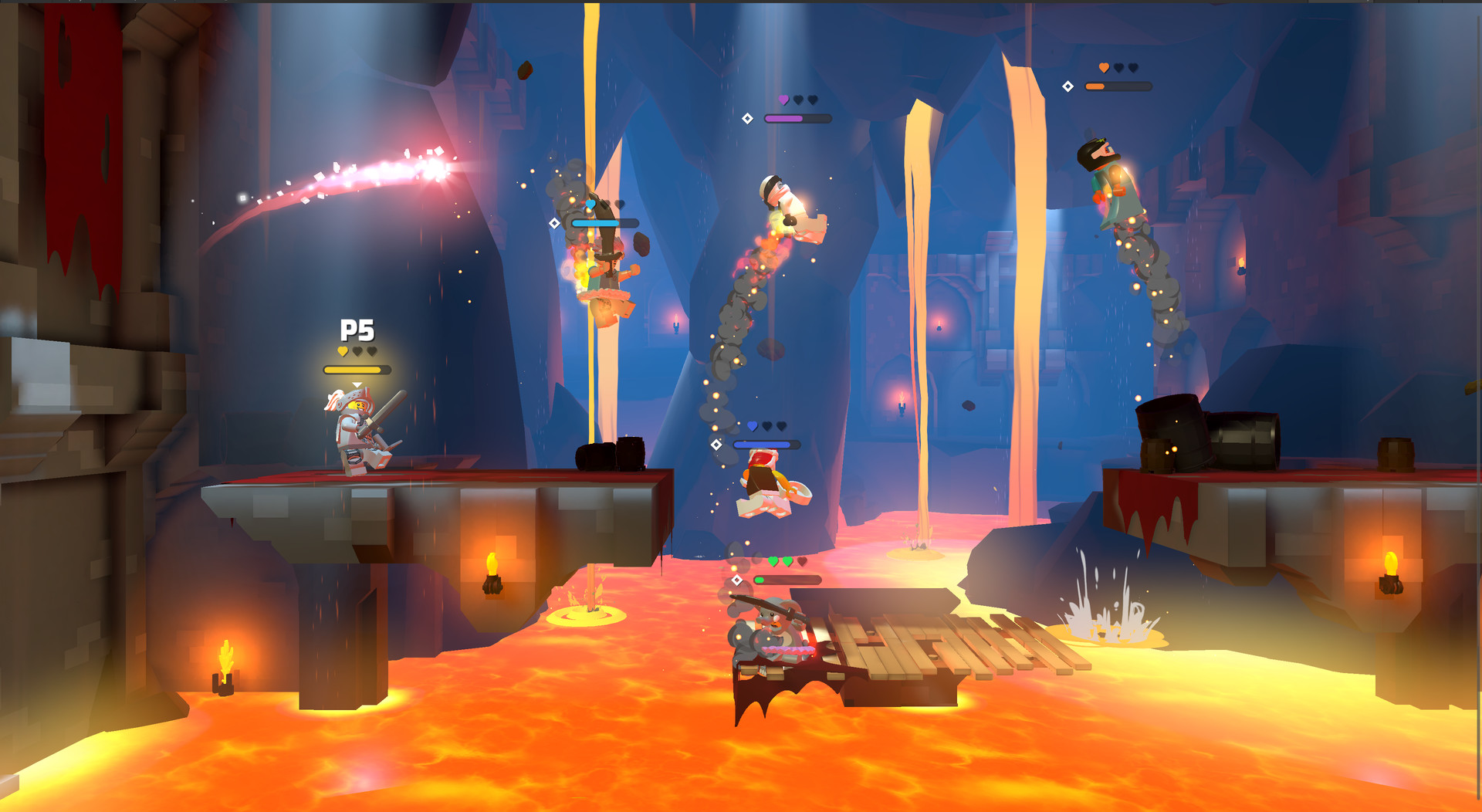 " Apart from a single attack button, there are two special slots each of which holds a power-up that you can take from the arena. And that’s all there is to the combat loop, in case you were wondering. "

The stages themselves are based around different themes, ranging from a pirate ship to a cyberpunk dystopia to an alien planet. Some of them are also based on popular IPs like Jurassic Park and Monkie Kid among others. Each of them have their own themed props and special items alongside a gimmick to shake things up. For instance, a ship-themed level requires you to climb to the very top of the ship to reach the control point – and the stage has a shark-ride power-up that can make enemies fall off from the control point rather easily. And another lava-themed stage has the lava level rise periodically – requiring you to jump to higher platforms to save yourself from dying to the molten stuff.

The variety is novel in concept, but in the face of the game’s ultra-thin gameplay mechanics – they don’t amount to all that much. With the exception of some micro-strategic elements for different objectives, the gameplay often boils down to jumping into the fight and keep spamming your attack button to defeat the opponent. Then do it again, rinse and repeat. What downplays this element of variety is the fact that Brawl mode has a stage rotation mechanic wherein you can only choose a stage from a 4-choice pool and a random pick. This means that stages that are popular amongst players will be repeated over and over again, and you can’t even queue for a stage that you like that isn’t present in the current choice pool. 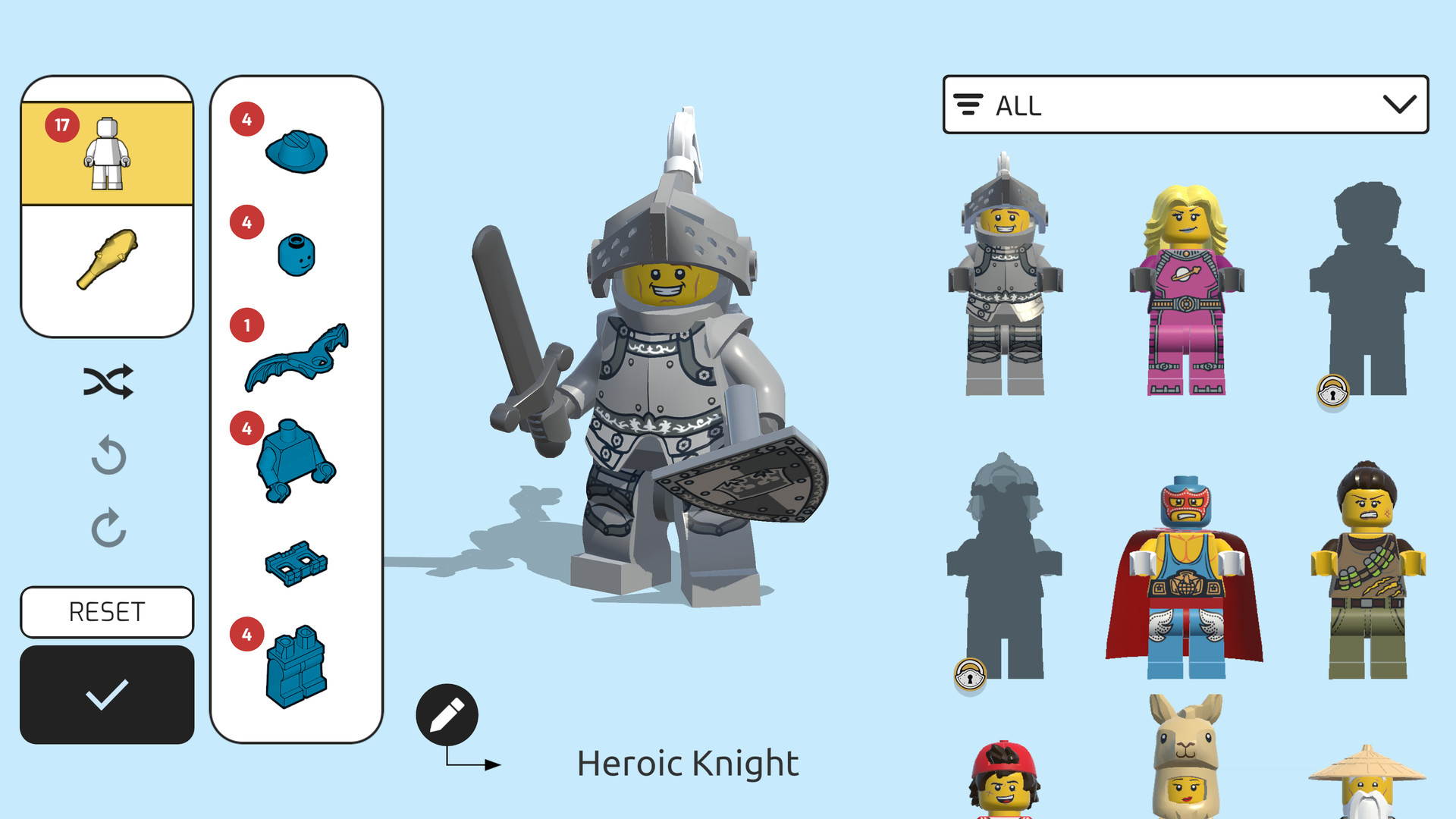 LEGO Brawls has a roster of brawlers ranging from a castle knight to an intergalactic warrior to a guardian of death. Each of these characters have distinct designs, but they are functionally one and the same. Each will deal the same amount of damage and has the same one attack move – which essentially reduces the difference between these characters to a purely cosmetic level. There’s also a decently fleshed-out character creator, which allows you to mix and match different blocks to create your own custom brawlers. There are plenty of blocks to choose from, and there’s a lot of potential for crafting goofy characters or dressing up as your favorite characters from other games or movies.

Players will start out with less than a handful of brawlers, and additional brawlers are unlocked through playing. Each victory or defeat nets you some points that contribute towards your active themed progression tree, which unlocks blocks and elements within that particular theme. For instance, if you select the Wild West theme – you will be able to unlock hats, pistols, masks, and whatnot. There are more than a handful of themes to choose from, meaning you will have plenty of busywork should you be willing to put the hours in. 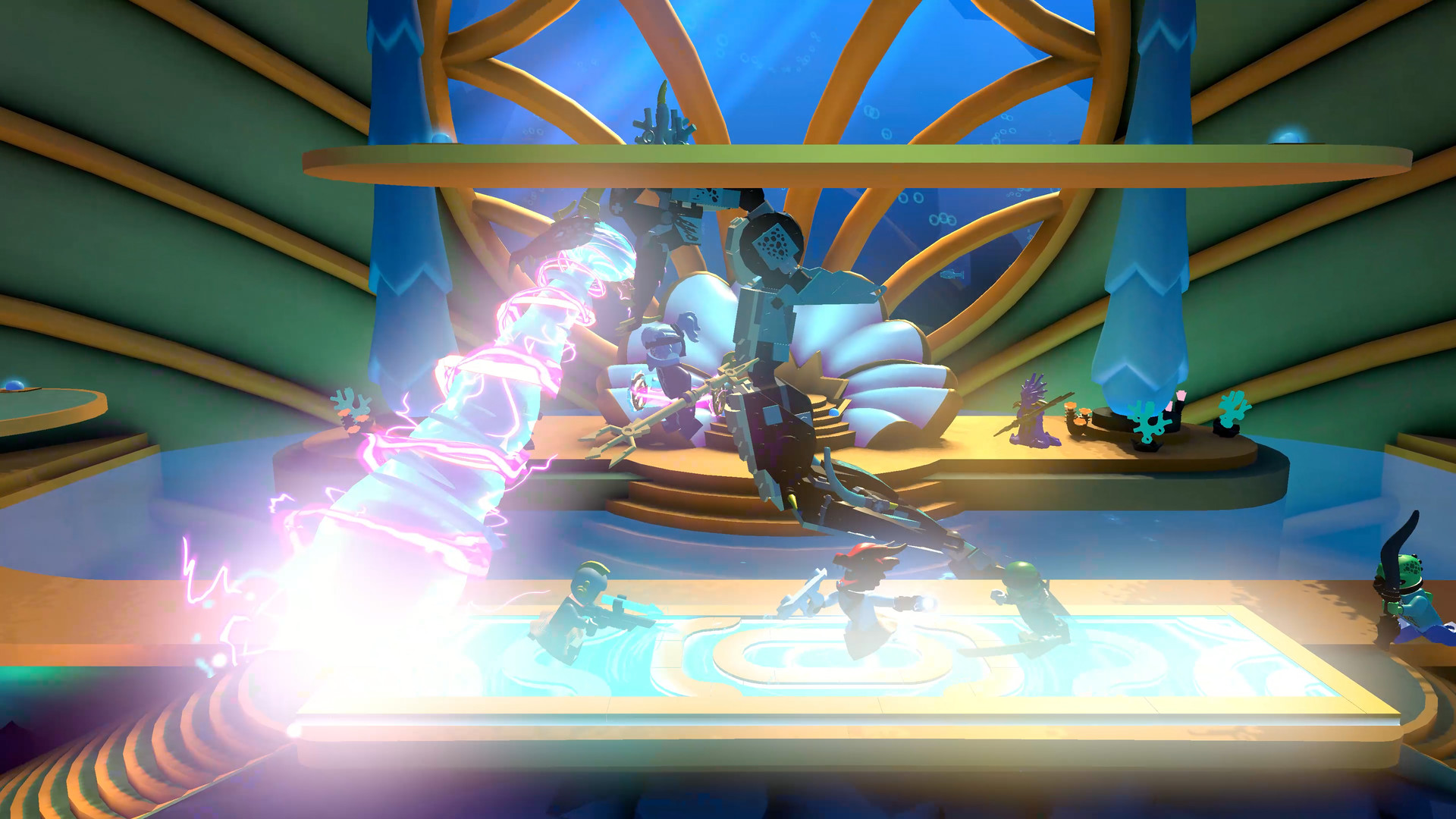 Overall though, the progression feels really stingy. You need to attain a mastery with each unlocked Brawler by playing as that character to unlock the next fighter which of course is functionally identical, which is really frustrating. Some unlocks are hidden behind chests, which are opened when you unlock all pieces of a particular outfit in a specific theme. It feels purposefully bloated its audience to keep coming back for minor unlocks, and it obviously failed to captivate my attention in a similar fashion.

This is something that can be said about LEGO Brawls as a whole – it’s a game that just can’t hold anyone’s attention for long. The mechanics themselves – while simplistic – are functional, and the variety in stage designs and game modes does make the game fun for a little while. But when you get over that short-lived period, an inescapable feeling of repetitiveness starts to kick in – which is further compounded by stingy progression systems and little variety amongst fighters.

Of course, some of these problems wouldn’t have stuck out that much if the game would have been a part of a subscription service, like it was the case with the mobile release that was included in Apple Arcade. But even at its half-retail price, LEGO Brawls just can’t justify its price tag – and is a forgettable brawler that doesn’t offer much for anyone wanting a meaningful and captivating experience from this game.

Final Verdict:
AVERAGE
Simply put, LEGO Brawls is a disappointing game.
A copy of this game was purchased by author for review purposes. Click here to know more about our Reviews Policy.