LittleBigPlanet 2- Not So Little After All?

We got in 2008 what is possibly the most memorable title on the PlayStation 3- Media Molecule’s much beloved platformer, LittleBigPlanet. It’s a game that needs no introduction, to be honest. Almost everybody has, at one point or the other, been a part of the LittleBigPlanet universe, either in the PS3’s awesome (yes, awesome is the only word) debut of the series, or it’s underwhelming brother on the PSP. Whichever way, all of us have experienced the truly wonderful creation tools of LBP- and all of us know know how fun it is to Play, Create and Share. After the awesomeness the original LittleBigPlanet was, a sequel was but obvious. Fans had been craving for a LittleBigPlanet 2, and Media Molecule love their fans- the quality of LittleBigPlanet is a testament to that. And thus, they announced LittleBigPlanet 2, what looks to be one of the most ambitious titles in the near future, whether on the PS3, or any other platform.

The killer question- can LittleBigPlanet 2 hope to match up to the innovative, creative and wacky nature, that LittleBigPlanet offered in unprecedented amounts? What was so good about LittleBigPlanet was that it was a fresh idea, something that games had not incorporated before it arrived on the scene. The Play, Create, Share mantra has been used twice more in Sony games after LBP, in LittleBigPlanet PSP and in ModNation Racers- both were, to say the least, uninspiring. How, then, can we be sure that LBP2 will manage to wow us with the same level of depth, innovativeness and most importantly, fun, as the first instalment did?

Let us have a look at the key features of LBP2, and decide if it will be worth the wait, or just a lesser son of a great sire.

Variety Is The Spice Of… Fun! 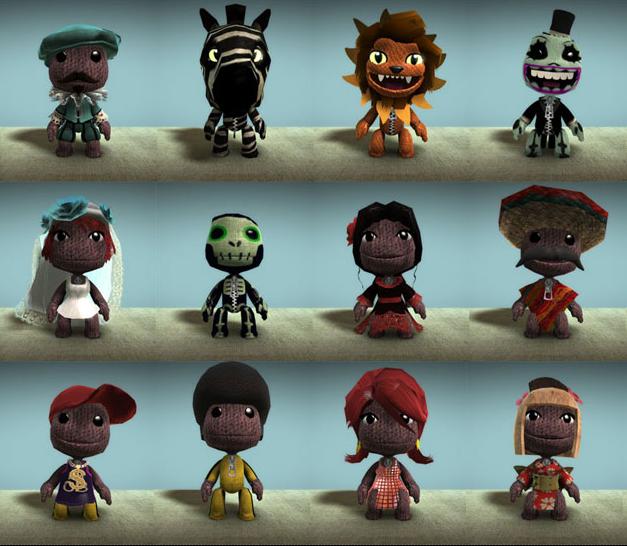 I am vengeance. I am the night. I am…. Sackbman- boy… whatever.

LittleBigPlanet has become anonymous with variety, creativity, fun and refreshing. With unprecedented depth given to the creation mechanic, the players could create just about everything in the game, LittleBigPlanet wowed one and all. The question, as mention above, is, will the sequel be able to surprise us as the first one did? Or will it just be a refinement, nothing else?

Well, for those who fear LittleBigPlanet  2 will lack the variety that LittleBigPlanet offered, you are badly mistaken. Not only will LBP2 be fully backwords compatible with all the user generated content of the first game, players will also have the ability to edit them using LBP2 creation tools, thus adding more replay value to the already night perfect gameplay formula. And with the depth offered in LittleBigPlanet 2’s creation mechanics, we should all get prepared to get blown away.

As we can see above, the creation mechanics are immensely deep. The Sackbot creation mechanic looks like a fresh new idea, that will most probably keep the formula from getting stale. Having the ability to create Sackbots means having the ability to create NPCs (non playable characters) , which can be either friendly or hostile, depending on how the player crafts them. The same costumes and decorations that could be used to make playable character will be available for the creation of these Sackbots.

Another new tool in this game is “direction control seat.” Supposedly, this will allow the players players to assign several actions, such as button presses or motion control commands to specific aspects of the content they have generated using the creation tools. This is not just restricted to levels, however. These movements can be implemented on Sackboy as well, making his movements more free. Now this, I must say, sounds neat. While it is nothing more than a mere refinement, it might prove to be very useful and handy in the game, and might actually turn out to be one of those things that make this game a worthwhile experience.

Not just that- new weapons and gadgets will be introduced in the game, the most noticeable of those additions being the grappling hook (have a look at the video above), which, while nothing that has not been seen in games before, offers for an all new level of fun and complexity to the gameplay formula. Another one of these awesome new gadgets is the Creatinator, which is something like a hat worn by Sackboy which can be used to fire any object (depending on how the player has configured it). The power gloves, which allow Sackboy to pick up and throw objects and sometimes even enemies, is a great new addition too.

But the meat of LittleBigPlanet 2 has always been customization- will the customization in LittleBigPlanet 2 be up to the mark? We have already seen that the creation tools of the game are pretty impressively deep and creative. This time around, the customization is very expansive- and yes, expansive is the only word for it. You can customize just about everything. You can change what kind of game you want to play- platformer, fighter, shooter, racer, role playing game; anything, and LBP2 has it to offer. You can change the in-game and cutscene camera angles, so now LBP2 is not necessarily a 2.5D platformer, it’s what the players want it to be. Players, apart from using the in built licensed soundtrack, can also compose their own music using a music mixer and use it in their own levels or edit downloaded levels. Not only that, players can also record sound effects and incorporate them into the game. Players can also make their own animations for different characters, and levels can be strung together in sequence, so that the game jumps automatically from one level to other at the end of each level.