Karting for the creative

Take Mario Kart, stir in some ModNation Racers and a few hefty spoonfuls of Sackboy and what have you got? Yup, Sony has brought us LittleBigPlanet Karting, a cutesy racing affair developed by United Front Games along with Media Molecule.

Ever since ModNation Racers sped onto our screens in 2010, fans of Sackboy have been demanding this release – combining creativity, customisation and cars with one of Sony’s most-loved characters. 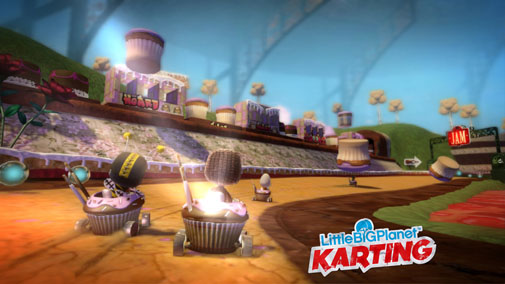 Sackboy is star of the show, in his customizable Kart

Clearly, the ‘Play, Create, Share’ concept is central to LBP Karting and will literally provide you with an unlimited array of tracks to thunder round. You should know pretty much what to expect; this is your typical Kart racing game… cartoony graphics, solo and multiplayer modes, weapons dotted about the track and collectibles.

Stephen Fry lends his dulcet tones to the game, introducing the levels and offering comedic comments as you flick between the menus. In-game effects and the soundtrack are crisp, clear and fun and – along with the visuals – ensure the presentation is top notch. 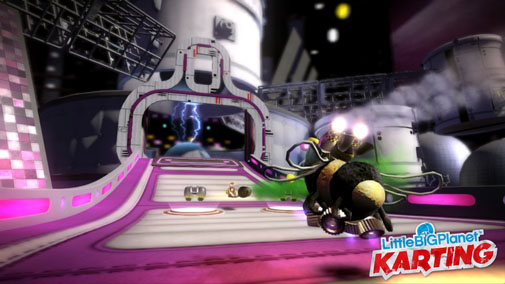 The presentation is superb, as you’d expect

This time round, Sackboy has to take on the Hoard, a group of ruthless scavengers deadset on stealing Craftworld’s prizes. While whizzing about the place snaffling all the goodies, one of the clan crashes his cart and Sackboy seizes the opportunity to nab it and start racing to get everything returned.

Sackboy controls the various menus from his pod – a cardboard spaceship. You can use various tools to change the shape and size of your car, as well as the sound of its engine. As you’d expect, you can give Sackboy an overhaul too should you so desire.

Dive into the story mode and you’re presented with a series of planets and unlockable tracks, ranging from traditional races and waypoint challenges, to point-based arena battles and versus levels. The supplied tracks are decent enough but the promise of user generated maps is what should really appeal to the discerning gamer. 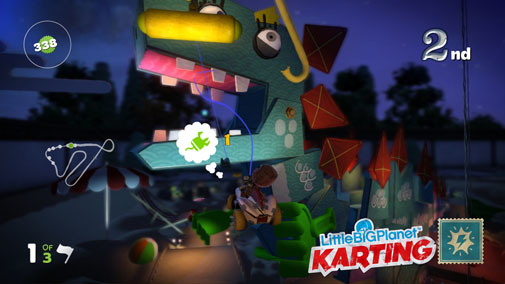 The cars handle nicely and you feel suitably in control when drifting around bends. There are jumps, swings, speed boosters and short cuts to make things interesting, as well as a wealth of obstacles and pitfalls designed to stop you in your tracks. It’s not too tricky difficulty wise, making this ideal for gamers of all ages. However, it does get massively frustrating when you get to the front of the pack only to be repeatedly targeted by your pursuers and lose a lot of ground when they unleash all manner of weapons on you. These aren’t as inventive as I’d have liked and you quickly feel you’ve seen what’s on offer; in fact, they often feel kind of underpowered and a little bit “meh”.

After you ride over an icon on the track and pick up one of the these power-ups, you generally have the choice to fire straight ahead to take out an opponent or keep it in reserve ready for one of your rivals’ attacks and fire backwards to counter it. In practice, it’s not that exciting and you can’t help but feel the best strategy is just to fire as soon as you pick something up so you’re free to get something else. 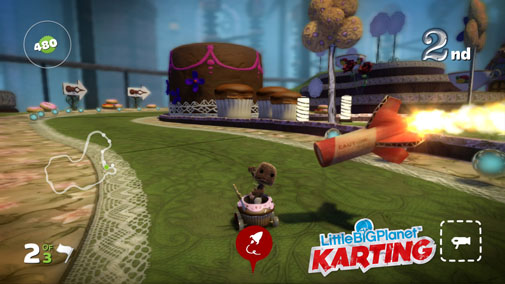 You can use weapons for attack or defence

The controls are reassuringly simple and you’re given a nice tutorial from Fry at the start of the game. Besides the obligatory acceleration, shooting and steering, you can jump, drift and reach out to slap opponents. Move is supported through the Race Wheel, although we didn’t test that for this review.

Set aside the racing element, and it’s being able to design tracks that is obviously the major attraction. A kit of tools allows you to create weird and wonderful routes, tailor the rules and tweak the settings. It’s comprehensive but awfully time consuming and tricky to master. You’ll need to dedicate time and effort to make anything decent – but do so, and the end result is fantastic. Obviously, you can share your creation with the wider community through PSN too and access other people’s maps. Given time there will no doubt be a wealth of content to choose from and I imagine you probably won’t need – or want – to delve into the map editor yourself in the future!

LittleBigPlanet Karting is fun and entertaining, and offers plenty of gametime – both alone and with friends. It’s great to be able to customise your kart and character but it’s the user generated tracks that make this worth a purchase!

This game was reviewed on the PlayStation 3

Designing tracks is a bit of a pain. Planets quickly become cluttered. Not the most exciting tracks at the start. Frustrating weapons

A cutesy kart racer starring Sackboy and featuring a comprehensive track editor. Fun for all ages

A copy of this game was provided by developer/publisher for review purposes. Click here to know more about our Reviews Policy.
Tagged With: littlebigplanet karting, Media Molecule, ps3, sony, United Front Games