Post-apocalyptic settings are a dime a dozen in video games. You’ve got Fallout, Wasteland, the Metro series, Left 4 Dead, The Last of Us, the list is nearly endless.  So when I tell you that Livelock’s story is something you’ve seen before, it shouldn’t surprise you. The plot is so banal that you’d be forgiven for ignoring it.

The long and short of it is this: in the future, humanity learns of a massive burst of energy that is heading towards Earth and will wipe out most life on the planet. In response, we “evolve,” uploading the consciousness of certain people into machines designed to outlast the Capital C Cataclysm while the rest of humanity hides out underground in a place called Eden. After the worst is over, these people-turned-machines, known as “Capital Intellects,” will work with a powerful AI called SATCOM, and the army of machines it controls, to rebuild the world and awaken humanity from their state of dormancy, and Save The WorldTM.

Of course, none of this goes as planned. The Capital C Cataclysm is far worse than anticipated, and SATCOM loses control of many of its machines. By the time it awakens the Capital Intellects, things have really gone to Hell, and you’ll have to fight through the rogue machines to get the… something that you need to save humanity. Look, if the generic naming conventions and recycled plot points didn’t give it away, Livelock’s story isn’t particularly good. 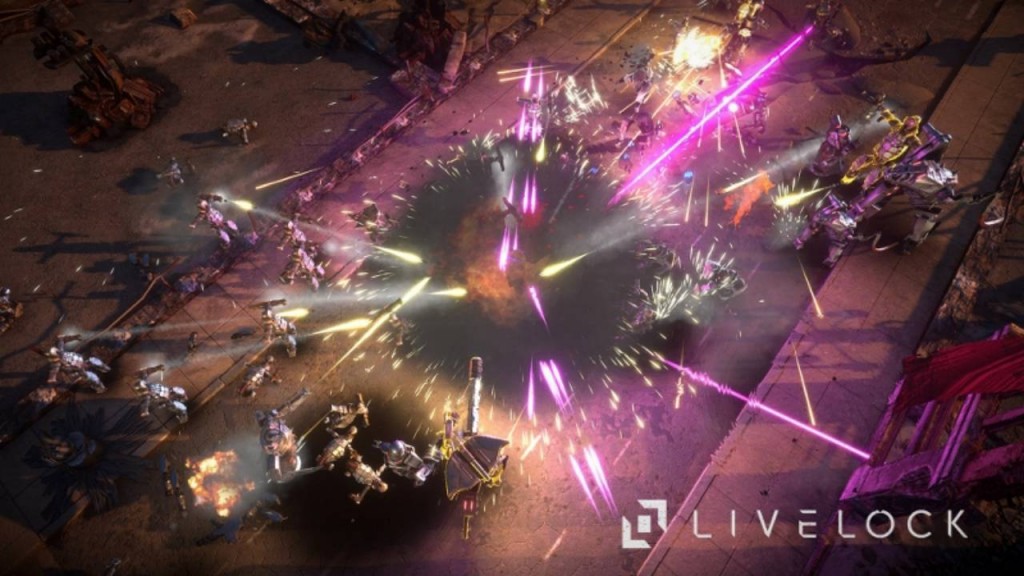 "Livelock throws a ton of enemies at you at once, and while the enemy variety isn’t particularly amazing, shooting most of the weapons feels pretty good, and the enemy robots explode rather nicely, even if they don’t respond to damage as well as they could."

The team at Arc Games has clearly put a lot of time and thought into it, but SATCOM’s droning voice and the lack of anything compelling about any of the characters doesn’t really lead to any kind of deep investment on the part of the player. It doesn’t help that the characters speak in robot appropriate clichés. One underground boss attested that he was “born in the dark” and reminded me that I was just “metal and rust.” After the fight, SATCOM informed me of the next stage in our master plan to take down the bad guys, which involved “hitting them where it hurts.” Suffice it to say, you aren’t coming to this game for its writing. For all the work Arc Games has done here, the plot basically boils down to a reason for your robots to shoot other, badder robots.

This is fine, because the actual shooty bits of Livelock are pretty decent. The game is a top-down, twin-stick shooter that supports up to three characters in drop-in, drop-out co-op. There’s three Capital Intellects to choose from. Vanguard is a melee brawler who can take a beating, Vex is a mid-ranged, Call of Duty-esque rifle master, and Catalyst is a support hero that can summon turrets and heal other bots. Once you choose a chasis to play, you can customize it, selecting everything from weapon loadouts and abilities to the various aesthetics of your robot. From there, you’re free to jump in and shoot everything that moves, and I do mean everything, unless you’re escorting it.

The game starts pretty slow, and the first few missions can feel unbearably small, but once it hits its stride, it never slows down. Livelock throws a ton of enemies at you at once, and while the enemy variety isn’t particularly amazing, shooting most of the weapons feels pretty good, and the enemy robots explode rather nicely, even if they don’t respond to damage as well as they could. Levels are also fairly short, often around ten minutes in length, ensuring that they never overstay their welcome. There’s also a great deal of variety in objectives. You’ll be tasked with holding areas, searching for items, fighting bosses, or escorting companions. 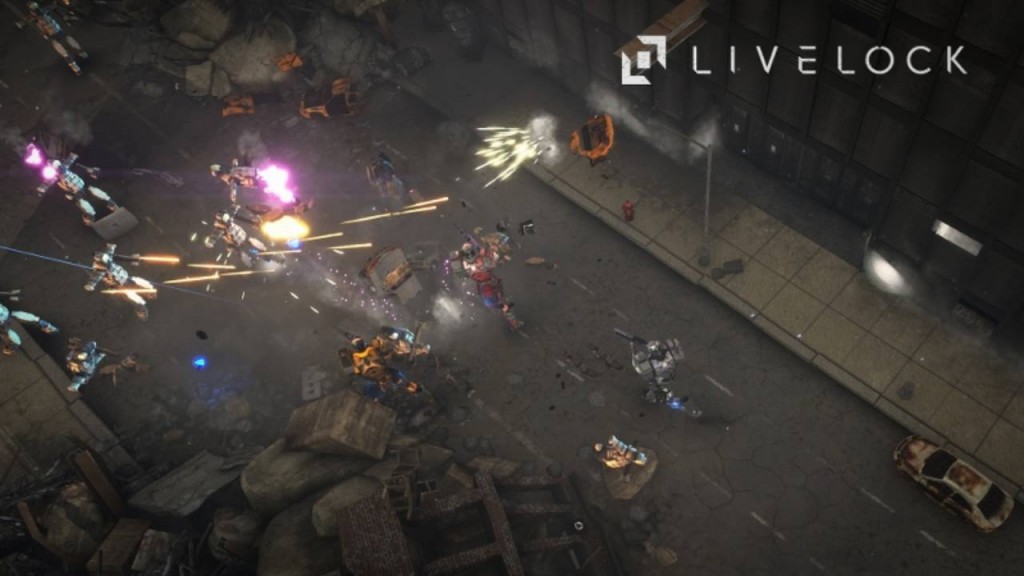 "While you can play the game solo, Livelock excels when played with friends, especially if you have a balanced team that supports one another. Each chasis plays differently and they complement each other nicely. Better still, online plays works very well and runs almost perfectly."

It’s all fairly standard stuff, but it’s pretty well-executed, and Arc Games even manages to make hold out and escort missions fun by having your base or buddy regen health while not in combat. One particularly memorable scenario has you protecting something with a group of turrets. While the turrets regenerate, they take damage quickly and will retreat underground to repair themselves after having taken a certain amount of punishment. The objective may be to keep the thing in question safe, but this mechanic means that you’ll be prioritizing protecting your turrets over the item itself, switching from chokepoint to chokepoint to maximize the health of each turret, as it’s impossible to hold off the enemies without them.

While you can play the game solo, Livelock excels when played with friends, especially if you have a balanced team that supports one another. Each chasis plays differently and they complement each other nicely. Better still, online plays works very well and runs almost perfectly, and the drop-in/drop-out nature of co-op means that you can start a level and wait for others to join you mid-game.

As solid as its gameplay is, however, Livelock is let down by a ton of little flaws. The game is designed as a twin-stick shooter, but playing on a pad feels clunky and inaccurate. The mouse and keyboard controls are thankfully much tighter. While the sound design is pretty solid, the graphics are visually unimpressive and the environments tend to blur together. Really, how many destroyed cities or dark caves can you look at? It’s certainly not an ugly game, but it’s not a looker, either. The upside is that the game runs well, even with so much happening on-screen. Weirdly, the only time I experienced any kind of slowdown was in the opening cutscene, which is pre-rendered. 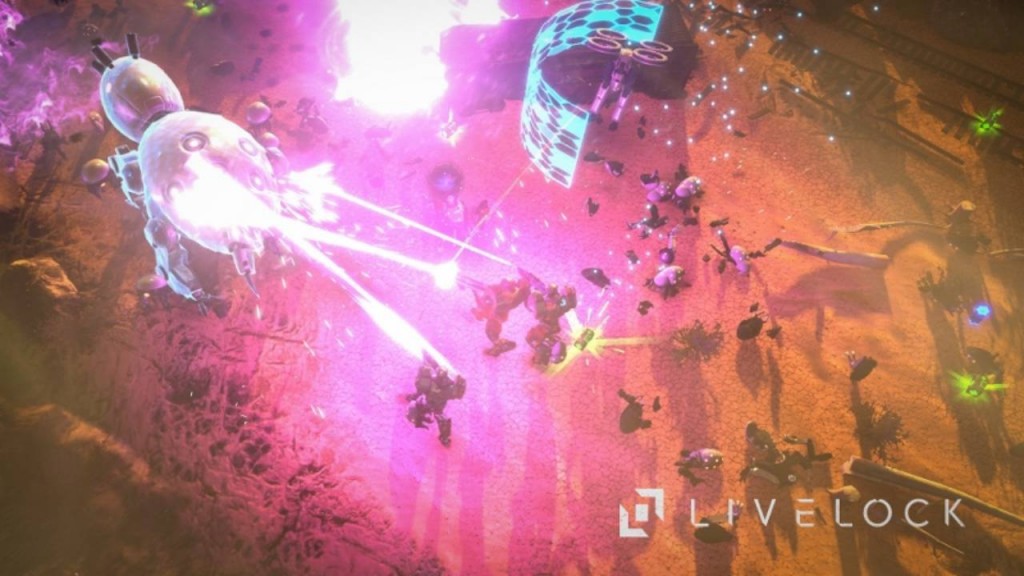 "There are only 21 missions in the campaign, and while their brevity is a boon on an individual basis, it means that the game is only a few hours long."

There’s also a few of quality of life issues. For instance, it’s impossible to switch characters between missions without having already created a character using the chasis you want, which means that using a new character for the first time requires exiting the game and heading to sub-menu just to change characters. This would make more sense if you couldn’t customize your character’s weapons, abilities, and armor on the fly, which makes one wonder why you need to create versions of a character at all, or why you’ve ever want more than one file assigned to a certain chasis. You also need to drop all the way out of mission select to play with your loadouts. It’s a minor annoyance, but it’s a pain to have to go back to the ready up screen just to equip a new weapon or ability.

The other thing about Livelock is that it’s short. There are only 21 missions in the campaign, and while their brevity is a boon on an individual basis, it means that the game is only a few hours long. Replay value can be found in leveling a new chasis, hunting down the relatively meaningless audio logs, or playing the survival mode, but the fact is there just isn’t a lot here.

For many, Livelock’s longevity and appeal will depend on how willing they are to dive back into it. Played once, it’s an above-average twin stick shooter will some interesting twists and decent mechanics. Those who really want to delve deep into the lore, max their characters, and discover everything will find that Livelock’s core is solid enough to support it. For the rest of us, it’s a quick, fun little game to be blazed through once on a lazy afternoon, as we try to save humanity from the… whatever it was.

Solid gameplay. Each character is distinct and fun to play. Runs smoothly. Levels are varied and put their old spin on new ideas. Lots of customization. Online play works well.

Final Verdict:
FAIR
Livelock is a solid twin-stick shooter with interesting character classes, good gameplay, and fun co-op play. The story is unoriginal and bland, and the game is relatively short, but it’s a worthwhile play for fans of the genre, even if it doesn’t do anything to drastically change it.
A copy of this game was provided by Developer/Publisher/Distributor/PR Agency for review purposes. Click here to know more about our Reviews Policy.