The Entertainment Software Rating Board has reported that a PC port of the hotly anticipated game, Lost Planet 2 will be joining it’s console brothers.

Lost Planet 2 has been given a T for Teen rating for, “Animated Blood, Language, Suggestive Themes, Violence”. 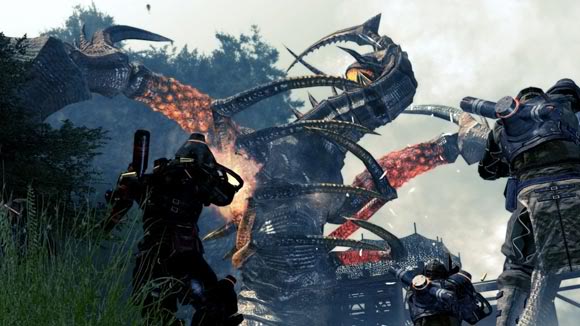 For the full document:

“This is a third-person shooter in which players lead a squad of “snow pirates” to seize control of a lost planet—one with lush tropical jungles and harsh, unforgiving deserts. Players use machine guns, rocket launchers, sniper rifles, and grenades to kill giant insect-like creatures called “Akrids.” Players can also pilot heavily armed mechanized suits (Vital Suits) to traverse the environment and inflict greater damage on enemies. The constant firefights are loud and frenetic; the enemy Akrids emit spurts of orange viscous fluid when hit. While male soldiers are typically clad in futuristic heavily armored suits, a selectable female soldier sometimes wears a piece of cloth hanging down the front and back portions of her body; this outfit tends to reveal her buttocks. Players are able to customize her with a bikini, draping chains, and a garter belt; in this outfit, the woman’s breasts will slightly jiggle—in slow motion—during combat. During an opening cutscene, a snow pirate opens the door of a helicopter and says, “It smells like sh*t!””

This has yet to be confirmed by Capcom.