Everything you need to know about Luigi’s Mansion. 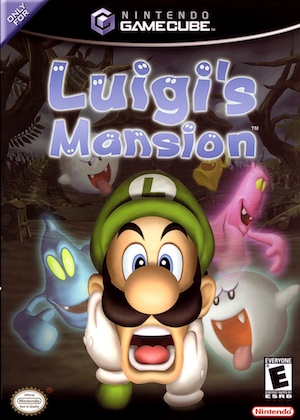 Luigi’s Mansion is an action adventure game developed and published by Nintendo, originally as a launch title for the GameCube in 2001, and later remade for the Nintendo 3DS in 2018. It was only the second game ever to feature Luigi as the protagonist instead of Mario.

Luigi’s Mansion was originally shown off as a tech demo for the then-upcoming GameCube at Nintendo Space World in 2000, and it was soon decided by Nintendo that they would make it a full game and release it as a launch title for the GameCube. Nintendo set out to make it different from usual Mario titles, choosing not to make it a platformer and not having a jump button, and also deciding that Luigi would be the main protagonist of the game instead of Mario. The game was officially announced E3 2001.

Originally, Nintendo had planned on including RPG elements in the game, however, this was scrapped, along with an entire area that players could ignore, because these were not in line with Nintendo’s vision for the game. Since GameCube systems were also built with stereoscopic 3D support, Nintendo had internally been developing Luigi’s Mansion with support for the same as well, but since 3D television screens weren’t commonly supported or used at the time, this idea was scrapped as well.

In 2018, Nintendo announced a remake for the game for their handheld, the 3DS. Luigi’s Mansion released on the 3DS in August of 2018, featuring full stereoscopic 3D thanks to the 3DS’ functionalities. 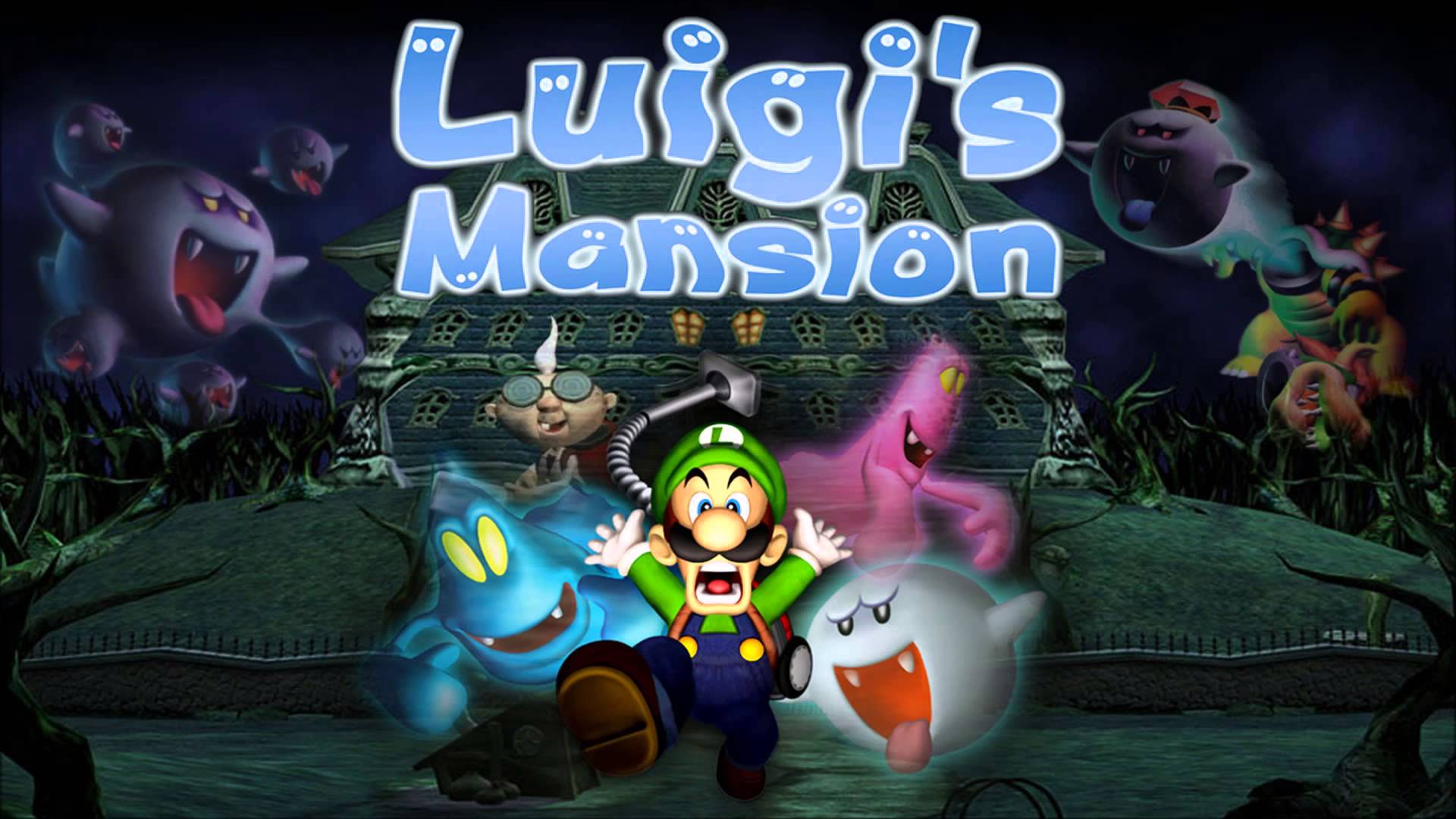 Luigi’s Mansion sees players taking control of Luigi, who receives a letter telling him that he has won a mansion as the prize for a contest, even though he entered no such contest. When Luigi shows the letter to Mario, the two agree to meet outside the mansion. When Luigi arrives at the mansion, he finds that it looks much more sinister than he’d imagined, and quickly realizes that things are not right with the place. When Mario is nowhere to be found, Luigi sets out to look for his brother in the mansion, which he finds is haunted. Luigi is aided by Professor E. Gadd, who gives him a special vacuum cleaner-like device called the Poltergust 3000, which can be used to suck up ghosts. 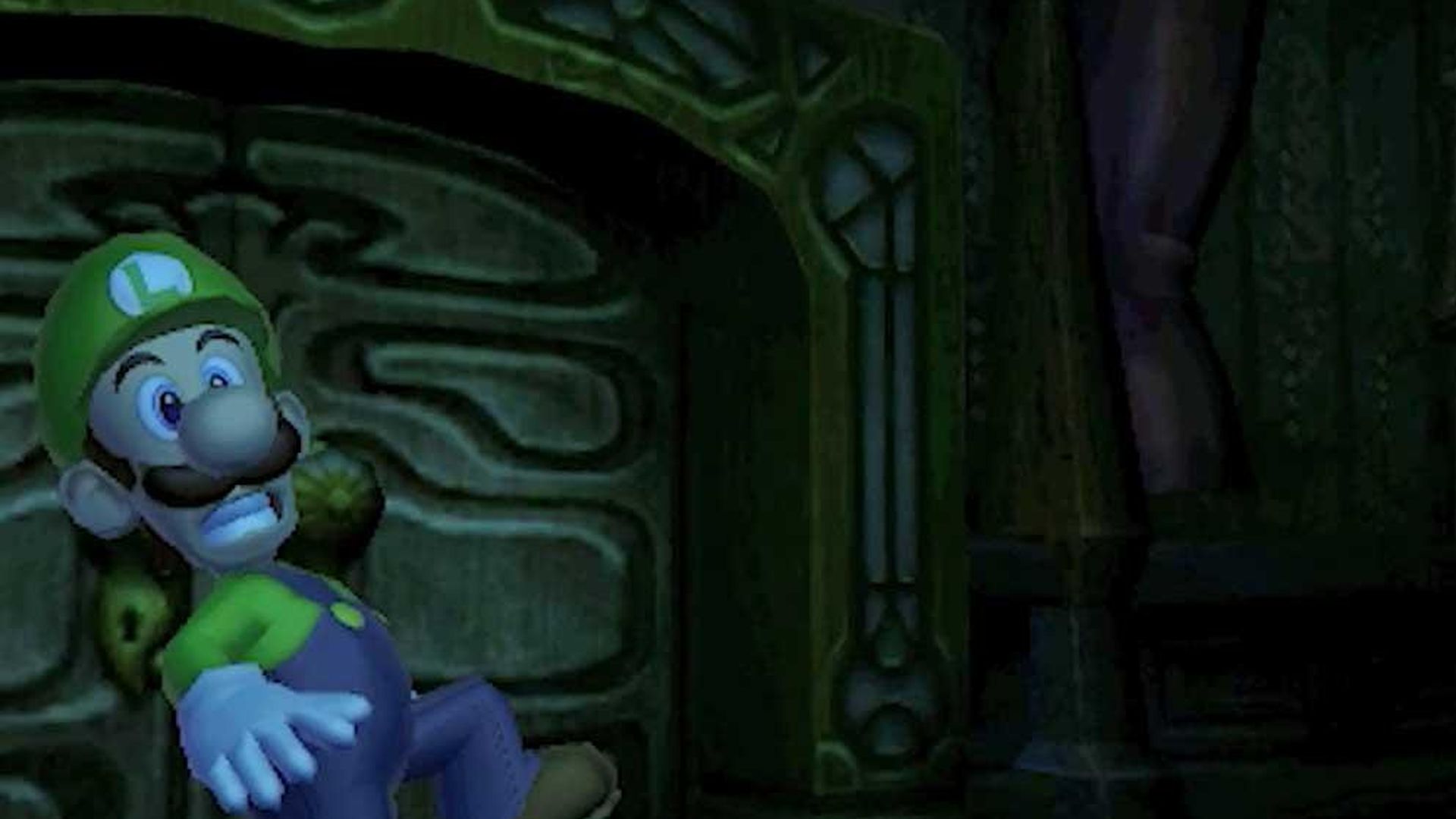 Luigi’s Mansion is split across four chapters. Luigi explores the mansion continuously in each chapter, looking for keys to unlock rooms to unlock new ones and navigating around ghosts while doing so. As players progress through the game, new rooms in the mansion are unlocked with each new stage. Each stage also has a boss battle that players fight at the end of the stage, while there is also a training area, as well as Professor E. Gadd’s lab, which can both be visited in between stages. In the lab, players can visit the gallery to view all the portrait ghosts, which are the bosses, they have captured.

Luigi’s Mansion does not have regular combat, nor does it have platforming controls like Mario games usually do. To defeat ghosts, Luigi must suck them into the Poltergust 3000, a device like a vacuum cleaner that is given to him by Professor E. Gadd. Luigi must first use his flashlight to stun ghosts, and then use his vacuum cleaner to drain the ghosts’ health. When their health reaches zero, they get sucked into the Poltergust. Some ghosts also have more health than others, and can break free of the Poltergust’s pull and leave Luigi open to taking damage. Luigi must also clear out every room of the mansion he visits and make sure all ghosts within have been captured. Once a room has been cleared, it lights up, while the background music in the room also changes. Additionally, in rooms that haven’t been cleared, Luigi nervously hums along to the music, while in rooms that have been cleared, he whistles the music cheerfully.

Rooms also often contain hidden items and treasures such as coins, and gems, which often appear in treasure chests after a room has been cleared. Luigi must use his Poltergust to suck the treasure out of chests. There are also various kinds of ghosts that have unique behaviours and can require different methods for being captured. For example, Boos are hidden and can only be found in rooms that have already been cleared by Luigi, and often require back-tracking. The portrait ghosts, or the bosses, also require players to meet certain conditions before they can be drawn out, which entails looking for medallions that Luigi can use to modify the Poltergust to suck up objects in the environment to use against portrait ghosts. 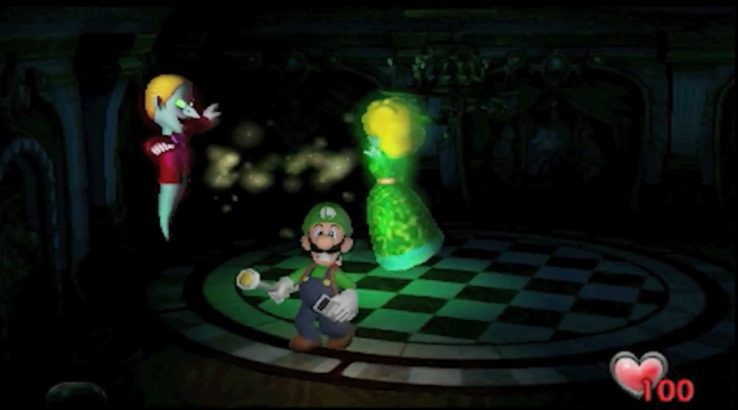 Luigi also has a device called the Game Boy Horror, which functions as a map, and is also given to him by Professor E. Gadd. The Game Boy Horror contains information about the rooms Luigi has visited and cleared, and the rooms that are still locked, while also containing information about the treasures and hidden items he has found in rooms. The Game Boy Horror also has a Boo tracker, which tells Luigi through a beeping sound and a yellow light that turns red when Luigi is in close proximity to a Boo. Capturing all Boos, of which there are fifty in the game, is necessary for completion.

Luigi’s Mansion on the 3DS is largely similar to the original GameCube release, but comes with a few added features. The game features full stereoscopic 3D support, which was originally going to be in the GameCube release as well, but was taken out during development, since stereoscopic 3D television screens were not common at the time. There is also Amiibo support, which can grant certain in-game bonuses, such as being revived when the player dies, as well as the aforementioned Boo radar. The strobe light from Luigi’s Mansion: Dark Moon on the 3DS is also included in the 3DS remake of Luigi’s Mansion, and players can choose to equip it and use it instead of their regular flashlight. Additionally, the game also includes a mode where players can beat their highest scores in portrait boss fights. The remake also contains co-op functionality- if two players own the game, they can play through all of it together, while if only one players owns the game, they can invite another player to tackle only boss fights with them.