If there’s one thing you can count on from year to year in the video game industry, it’s that there will be a new Madden. It is perhaps because of this reliability that Madden itself has become a form of controversy amongst gamers. I think nearly every one can agree that Madden is a great game series that does an excellent job of capturing football’s essence on the home console. But what of the individuals titles such as Madden ’06? Or Madden ’09? More importantly, what of Madden ’12? By the end of this review, you’ll have your own answer to “Is Madden ’12 worth buying?”

Let’s talk about the new features this game has to offer. My personal favorite is the “Dynamic Player Performance” or, DPP for short.  DPP is a new feature that directly impacts the performance of every player in the league. Each player now has a confidence score ranging from 1 – 5; when Madden ships, each player’s confidence level will be set to “3”. As you play through games, each player’s performance will be influenced by their actions within the game. Catch an impossible catch for a game winning touchdown? Confidence boost. Likewise, messing up what may have been an easy play will result in a decrease in confidence. You can really tell as you play too! In one particular game as the Eagles against the Rams, I wound up going 56 to 3 as I watched the Rams slowly give up any hope of stopping Michael Vick. Eventually, they practically let me score free touchdowns off of their punts, and seemingly passed me the ball for easy interceptions. 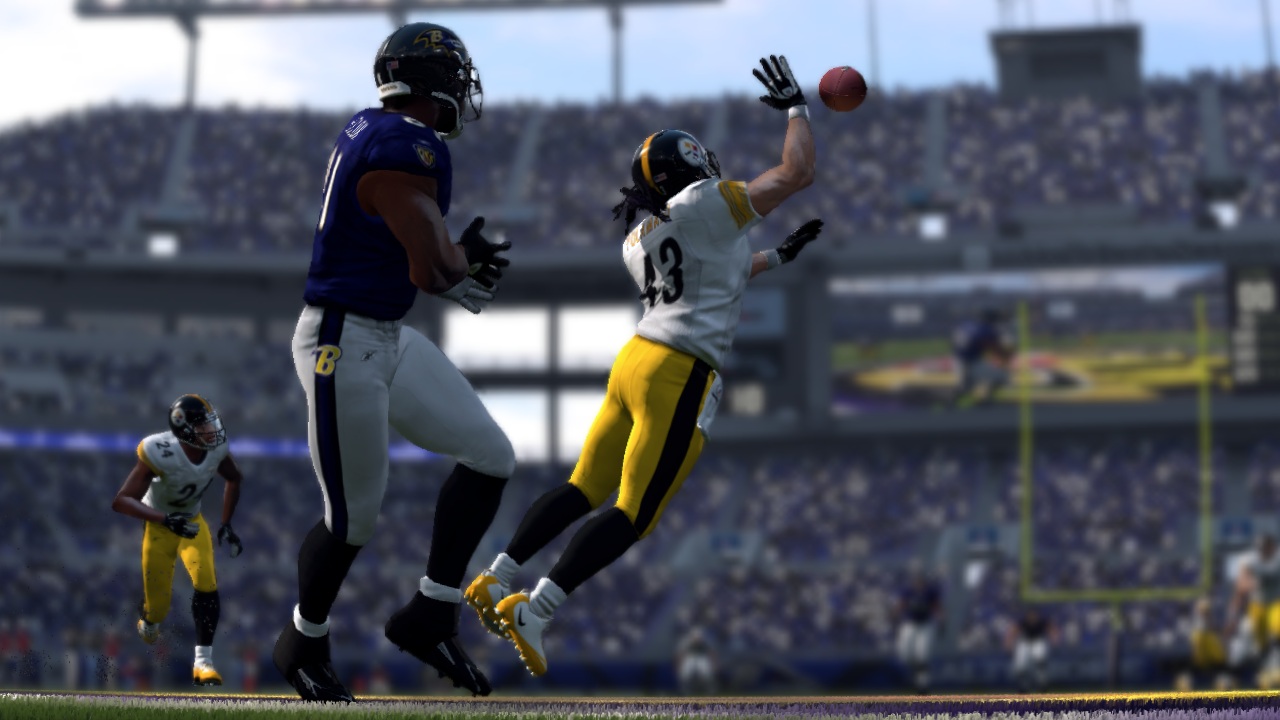 In addition to those features I mentioned about DPP, there are also “Hot Streaks” and “Cold Streaks” in Franchise mode. Put simply, when coming out of a bad game, players may have a “Cold Streak” and perform worse in their next game. The same is true for the opposite, keep up the momentum and your players will continue to reward you with a stellar performance. Finally, something I found really awesome is that with the weekly roster updates, EA will continue to change player’s confidence level based on their real world performance. This will be perfect for those of you that have the guys over on the weekend to play a few rounds of Madden, giving a gaming experience that closely follows real world events.

Another feature that has seen a lot of love is the Superstar Mode – a mode where you can create your own rookie, play as an existing rookie, or import a player from NCAA 12 to play through a career. As a huge RPG fan, I couldn’t help but notice a lot of the similarities this mode has to your typical Role-Playing game. Your character levels up through practice, you can adjust your stats based on the points you earn from completing practice and games, and there are even “roles” which remind me of RPG abilities – special additions to the character that impact the game in many different ways. Also, when creating your character, you can choose to sign onto any team you want, or if you’d rather, you can enter the draft and get picked by a team that needs the niche your personal character fills and get bonus skill points. Superstar Mode has created something I never thought could exist – a Sport’s RPG; Dungeons and Dragons for Sports Fans, if you will. 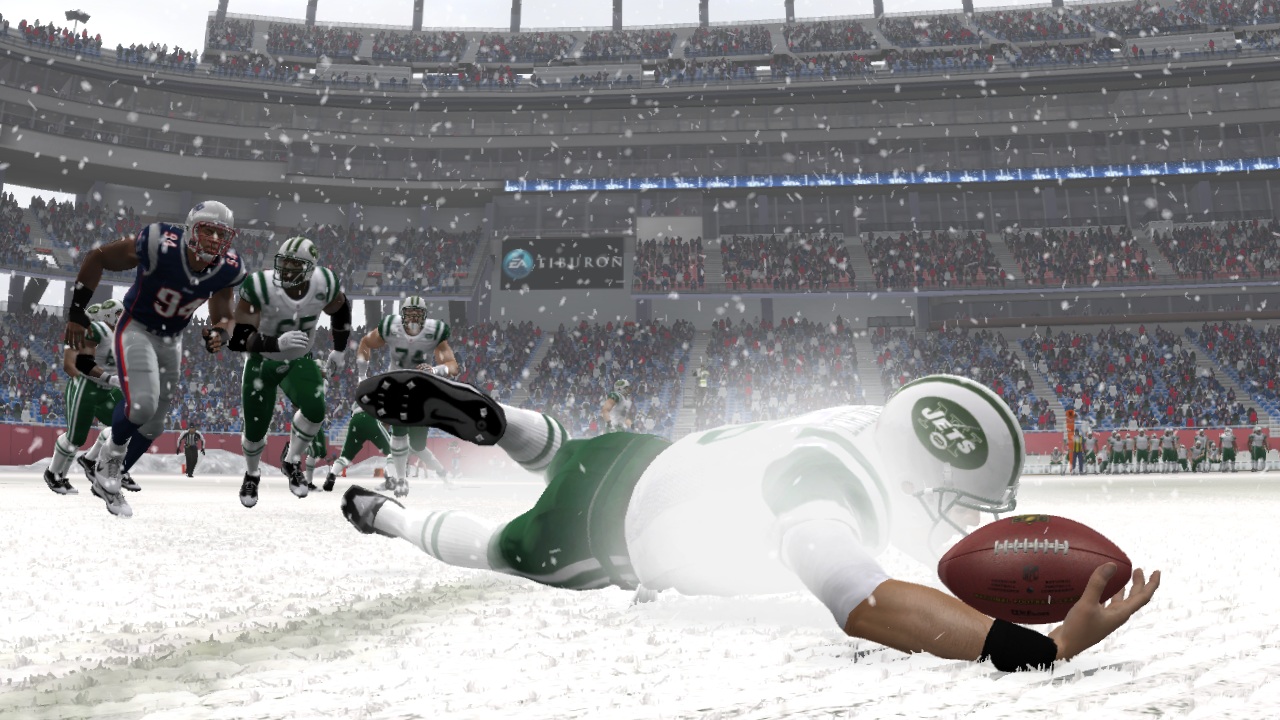 Play in the snow!

If Superstar Mode is Madden’s version of Dungeons and Dragons, then “Madden Ultimate Team” (MUT for short) is certainly its Magic the Gathering. When you first start up MUT, you will receive a starter pack of cards that contains everything from players, to coaches, to uniforms, stadiums, and other miscellaneous things. The Collector’s edition comes with a special “Legendary” pack of cards, so if this feature is something you’re looking forward to, picking up the collector’s edition is a good idea. You form a team out of those players and play games with your new fantasy team. As you play through games, you’ll earn coins which you can use to purchase more packs of cards to add more players to your roster. While there is a relatively low cap on the amount of players and cards you can have, this year you can trade your cards, or auction them for coins to others in order to create your perfect team.

Perhaps the most noticeable feature in Madden ’12 is the sheer amount of polish the game has been put under. The Madden experience is the closest it’s been to actual Sunday night football yet. The Grass is 3D now, and the level of uniform degradation is at its best yet with helmet nicks and scratches, uniform wrinkles, and photo-realistic grass stains. (The cardboard cutout audience is still there.) EA’s team worked directly with actual NFL Film’s cinematographers in order to produce accurate and realistic camera angles and shots. Everything from the analyst’s reviews of key players and the NFL logo after the game make you feel like you just watched an actual game of football and not just a video game. The only thing that dispelled my suspension of disbelief was the lack of unique commentary from the announcers. There were a few games where I would hear the same. Exact. Phrase. 4 or 5 times through the course of one game. I do suppose Madden needs a few things to improve upon year after year if they want to have a Madden ’13 that’s more than just roster updates. 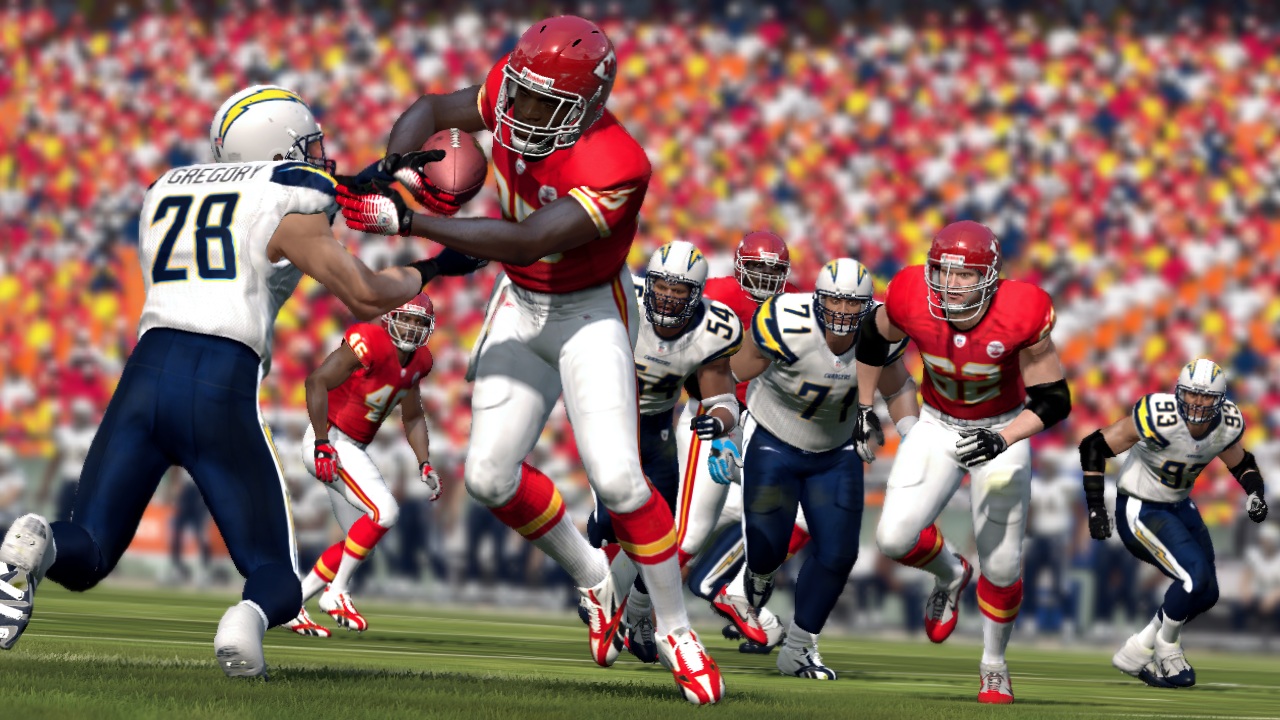 The list of new features does not end there either. There are dozens upon dozens of improvements with this new installment of the Madden series. One thing that I would like to stress is that everybody that purchases this game new should immediately update the roster so that it’s accurate. Unfortunately, if you’re buying this game used you will need a Madden Online Pass which will run you an extra ten bucks, so it’s something to consider if the latest rosters are important for you. Collisions have also been improved in this game, meaning you will no longer see suction, warping, or sliding. Size and weight of players also play an important role in determining the success or failure of tackles and blocking. For those of you obsessed with the strategy aspect of Madden, you’ll be glad to know you can now customize your playbook and the AI will even consider your custom plays in its Game Flow should you decide to listen to the CPU. (Please note, I found following the Game Flow against other CPU opponents very effective, but don’t try it against even the most novice of players. You will regret it.) Finally, there are online communities, groups you can form or join online that have their own sets of house rules so you can always find someone to play just the way you like to, and they do too!

That’s Madden ’12 in a nutshell. Despite the potential NFL lockout looming over this season, EA managed to pull out all the stops in an attempt to make the best madden yet. Perhaps this lockout was the best thing to happen to Madden players yet, as it has nearly forced EA to make an incredible experience in anticipation of potential lost sales from the lock out. Now that the lockout hasn’t happened I expect the players, and EA will reap the benefits of their hard work this past year. My friends and I have a saying “Madden skips a year.” Essentially meaning the changes from year to year usually aren’t enough to justify buying the latest Madden, but if you missed out on last year’s version, this year is sure to blow you away. In Madden ‘12’s case, I would even make a case saying that this year is worth the purchase even if you already own Madden ’11 to all but the most cash strapped of gamers.

Arguably the best entry into the series yet, EA put everything they had into making Madden ’12 great despite the lockout.

People looking to buy a used copy of Madden ’12 are already looking at an extra $10 and an internet connection in order to get the latest pre-season rosters.

Final Verdict:
SUPERB
The latest addition of Madden promises over 100 new additions across all game modes while simultaneously creating the most immersive football experience seen in any video game yet. Madden ’12 puts the team on its back and delivers a solid experience for all fans of Football.
A copy of this game was provided by Developer/Publisher/Distributor/PR Agency for review purposes. Click here to know more about our Reviews Policy.