And a Gronk Spike, too.

Posted By Will Borger | On 29th, Aug. 2016 Under Article, Reviews | Follow This Author @will_borger

As someone with literally no Madden experience at all, I didn’t really know what to expect when I installed Madden NFL 17 onto my PS4’s hard drive. My only previous experience with a game based on football came from NFL Blitz 20-03. A great, entertaining game, to be sure, but I don’t think I ever ran a single running play, there were no penalties, and it took thirty yards to get a first down – not exactly the best representation of America’s most popular sporting event. I was a football fan (Go Steelers!), but I didn’t really know what I was getting myself into. I did, however, know all of the complaints.

"The Skill Trainer features more than 80 drills and tutorials and will teach you pretty much everything you could ever want to know about football. Have no earthly idea what Cover 2 means? Curious about what a Slant is? This mode is for you."

Madden 17 opens with a game between the Washington Redskins and the newly relocated Los Angeles Rams, with both teams trying to sneak into a Wild Card spot for a shot at the Super Bowl. Putting aside the fact that the game seems to be giving both of these franchises far more credit than they deserve, and that if you’re winning (you play the Rams), hilariously conservative Rams coach Jeff “7-9” Fisher tells you to go for a two point conversion, this does a good job of teaching you how to play.

After that, you’re dumped into Madden’s Skill Trainer, which is sponsored by Gatorade, because of course it is. The Skill Trainer features more than 80 drills and tutorials and will teach you pretty much everything you could ever want to know about football. Can’t tell your Defensive Ends from your Wide Receivers? Have no earthly idea what Cover 2 means? Curious about what a Slant is? This mode is for you. It will take a while for the uninitiated for get a grip on the sheer complexity of American football, as the game is basically chess played with human bodies, but Madden 17 teaches you as well as it possibly can.

Once you’re familiar with the game, you’re free to jump into Franchise mode, online play, Ultimate Team, Draft Champions, or just play an exhibition match with the teams of your choice. You can even choose to play using custom playbooks and edit your roster. Alas, there are no historic teams, and you can’t create your own custom team from nothing, but there’s a lot of customization options to play with. 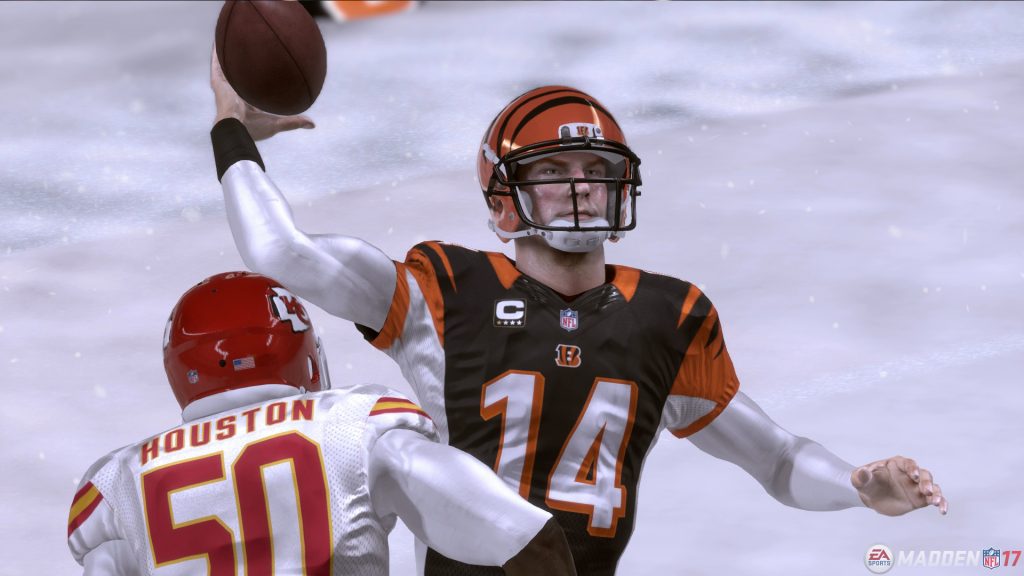 "If you’re like me, Franchise mode is where you’ll be spending most of your time. It can be a bit grindy, and rather dry, but it does a good job of simulating what it means to run or play on a football team."

Ultimately, how you play Madden will be determined by what you value. If you’re into simulations, you’ll dig Franchise mode, which allows you to play as either a coach, owner, or player. Ultimate Team is a mode where you collect cards that represent individual players by completing challenges, while Draft Champions allows you to draft a team and take your battle for gridiron dominance online.

For most people, Ultimate Team will probably be the main draw, because of the challenge content and continual updates. It’s EA’s biggest moneymaker – they really, really want you to buy the various bundle packs, and you’ll basically have to to get the best players – but you can do pretty well without them if you do the challenges.

If you’re like me, Franchise mode is where you’ll be spending most of your time. It can be a bit grindy, and rather dry, but it does a fairly good job of simulating what it means to run or play on a football team. Players gain experience for completing drills and playing games, which can be spent to upgrade a number of stats. The game also reacts to your progress with updates, tweets, and news items from prominent football personalities, which will keep you engaged and is a good way to track both your progress and that of other teams, even if there really is no story to follow when you opt to create a player. There’s also, strangely, no option to make a defensive player in franchise mode, which, while understandable (you’d spend a lot of time doing nothing), is a bit disappointing. Offense or bust, guys. EDIT: This is incorrect. There is a tab to will allow you to play defense. I just didn’t see it. I apologize for the error. 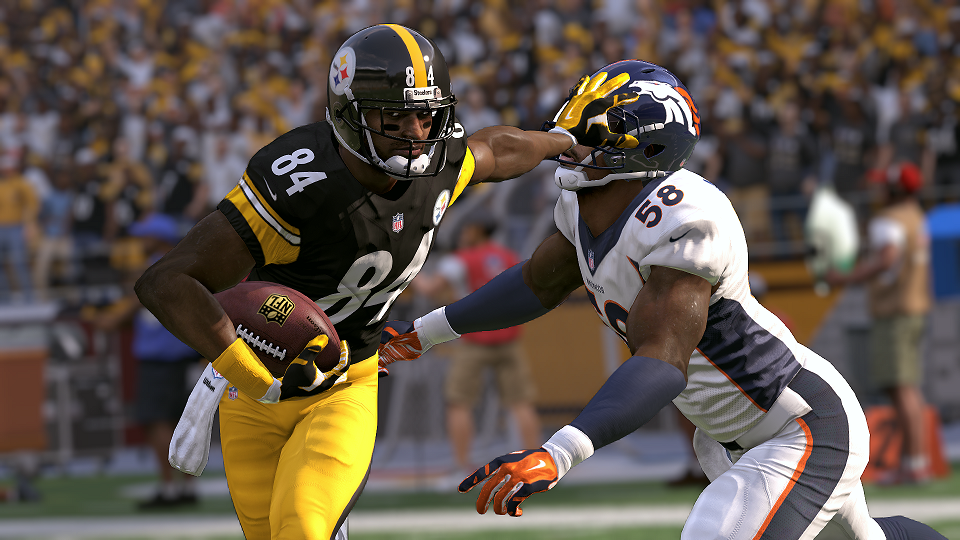 "EA has spent most of their in-game upgrades on the run game and the defense, and I’m happy to report both work very well."

You can also invite friends and set up a league that can handle everything from the draft to championships, and even move franchises to different cities. The downside is that you cannot play a season outside of franchise mode, making it a necessity for anyone who wants to carry their team to the big game.

Speaking of the game, it plays very well. You’ve got control over pretty much everything as you call plays, and I was never left wanting for options, or unable to do something I thought I should have been able to. EA has spent most of their in-game upgrades on the run game and the defense, and I’m happy to report both work very well. New onscreen prompts will alert you when to use skill moves when running the ball, all of which are conveniently mapped to a single button. You can spin, juke, dive, stiff arm, and hurdle, among other things, and each move will be more or less effective depending on the player you’re using. It makes the run game a lot of fun, and the run game quickly became a key part of my offensive arsenal, despite how easy it is to pass the ball.

New details for the offensive and defensive line also comes in to play nicely. Running with teams with excellent offensive lines like the Vikings and the Cowboys is easier than most, while playing the otherwise excellent Seahawks will make you scramble to mask their o line’s shortcomings. The same level of care has been taken with the defensive line. Players now have gap assignments that make it easier to shut down offensive plays, and you can focus on yours while trusting the AI to take care of the rest. This, coupled with the ability to swat down passes, makes both defense and offense more engaging to play, and you legitimately feel like you’re playing chess against the other team pre-snap, angling for just the right play. 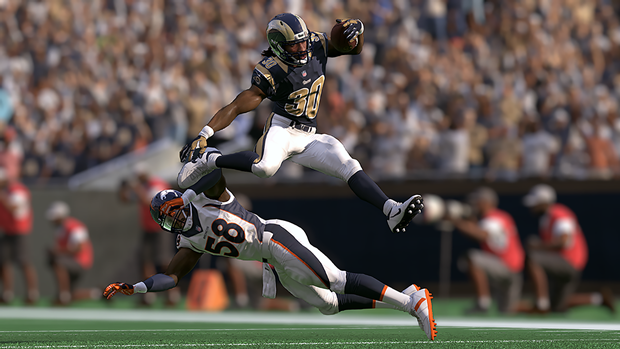 "The best addition, however, is Play the Moments, which appears in Franchise mode. This sims the game to key moments – third and longs, scoring opportunities, goal lines stands and the like – which shortens your average game to about 20 minutes without sacrificing exciting events."

The best addition, however, is Play the Moments, which appears in Franchise mode. This sims the game to key moments – third and longs, scoring opportunities, goal lines stands and the like – which shortens your average game to about 20 minutes without sacrificing exciting events. Obviously, this works better with better teams, like the Steelers, Patriots, Packers, or Seahawks, where the game is less likely to throw a hideous pick around midfield, or stall on a drive when you’re waiting to play. Cleaveland fans beware, but it’s still fun

There’s a number of other small changes: kicking has been retooled, and works fine, but isn’t anything to write home about. The new commentary, provided by Brandon Gaudin and Charles Davis is quite good, but it runs into the issue of repetition. After playing a couple games with the Steelers, I began to hear the same remarks about Le’Veon Bell’s college-to-the-pros body transformation, often multiple times. This is just the nature of sports games, and EA has promised multiple free commentary packs as the year goes on, the first of which is already live.

There’s also the things that are just plain weird: Bill Belichick not being the head coach of the Patriots (his choice, but the lack of The Hoodie is noticeable), the odd commentary flub, players running through the stands, etc. And it still isn’t a looker, happy to occupy the weird gap between kinda bad and uncanny valley good. These are, however, very minor qualms and do very little to take away from the fact that Madden NFL 17 is a celebration of football at its best, a sim that captures the joy and excitement of the game that has captivated a nation. I may not have known what to expect going in, but I couldn’t be much happier with what I got.

Strong core gameplay with new features. Lots of modes to play. Lots of options on the field and off. New commentary is good. Excellent tools to teach you how to play. Franchise mode is a legitimate blast.

Graphics can look odd. The odd minor bug. No narrative in Franchise mode. No historic teams. You can’t create a custom team from scratch. Commentary can be repetitive.

Madden NFL 17 isn’t perfect, but it’s a damn fine football simulation that puts the game first, and then gives you lots of ways to play it. There’s teaching tools to whip even the most noobish of newbies, and the strong core gameplay and large variety of modes should please longtime fans. If you’re a football fan, it shouldn’t be missed.

A copy of this game was provided by developer/publisher for review purposes. Click here to know more about our Reviews Policy.
Tagged With: EA, EA Sports, EA Tiburon Studios, Madden NFL 17, ps3, ps4, xbox 360, Xbox One