Making some yardage with a new story mode, NFL 18 is a good time for any player.

Are you a hardcore Madden NFL fan who plays the new release each year religiously? A confirmed armchair quarterback and top coach who can call a defensive play within moments? Great, you’ll really enjoy Madden NFL 18, as this is very much the kind of EA Sports game that they’ve had tons of success with for years.

The standard suite of options opens before you immediately after you start the game, with the standout new addition being Longshot, Madden’s take on the single player story mode trend started by FIFA. Devin Wade is the big dreamer with aspirations to being drafted in the NFL. Following Wade from the childhood days of playing football with his dad to him and his friend road tripping to the NFL Combine to try and catch the eyes of the scouts and beyond can be a surprisingly engaging experience just off the backs of the characters and cast. 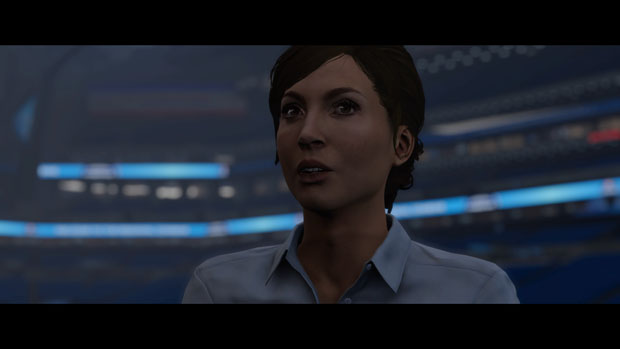 "Leaning on the characters developing and their journey was a smart idea, because the mode doesn’t have you playing a ton of football."

The cast is what carries Longshot the most, with the performances spot on and some great moments to define what kind of player and person Wade is. The mode leans a little heavily on some rote cliches of the sports movies: the entire premise of a tragic kid from Memphis making his dreams come true and redeeming himself with grit and a pick up truck is hollowly familiar, but this does highlight the performances as creating something special out of a premise that really has no right being as engaging as it is.

Leaning on the characters developing and their journey was a smart idea, because the mode doesn’t have you playing a ton of football. Rather it progresses in a fashion almost like a Telltale game, allowing you to tailor your responses to situations that can either help or hinder the draft chances for Wade or those around him, with some mini-games and QTE sequences of varying quality worked into the narrative well, just to make sure you’re paying attention.

Perhaps you’ll feel stopping to take a quick selfie before getting into the combine registration is harmless, but the omnipresent scouting report will catch it and dock you for spending too much time on social media. Repeating back a play to coach in practice should be simple, but get it wrong and the confident Wade shrivels into an unsure mess, mumbling back the incorrect command. To its credit, Longshot at least had the (foot)balls to allow for failure by including a few different outcomes, usually affecting those around Wade, but there is that looming failure state if you don’t grow with Wade and made the wrong choices. 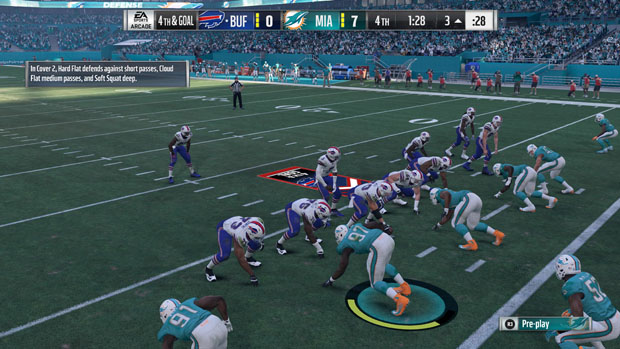 Outside of Longshot, many of the standard sports modes are present and accounted for without much to say about them. You can drop in for a quick game with your preselected favourite NFL franchise, go on a longer season exhibition, or maybe a truncated version of the season that has you snap to a few pivotal moments in each game, and an Ultimate Team mode which houses the co-op component, the strategy and team building of fantasy football that will hook the NFL faithful and the microtransactions that nag you to better your team.

Regardless of mode, I was rather surprised at how modular the options are and how accessible the game could become as a result. Fitting in with my self confessed football virgin status I elected to stick to the arcade mode, simplifying a lot of the decisions with play suggestions and allowing for more big action intuitive for a pick up game with friends, and scaling all the way up to a hardcore NFL simulation that demands you be quick on the sticks and inputs for success. Allowing such a range to enjoy Madden your way or the way that friends will get the most out of is a huge plus to the game and allowed me to really get into the action quicker with basic knowledge of a run play against a pass play and how to catch the ball.

Within arcade mode, almost everything is sped along to remove the fluff while still giving the player lots of leeway to play in an interesting fashion. Plays can be auto suggested to the player and always offer decisions to be made within split seconds that can define the game, and allow the player a few precious moments to react and create their own plan. And the feeling of nailing that 50 yard touchdown after spotting the open receiver, just perfect. 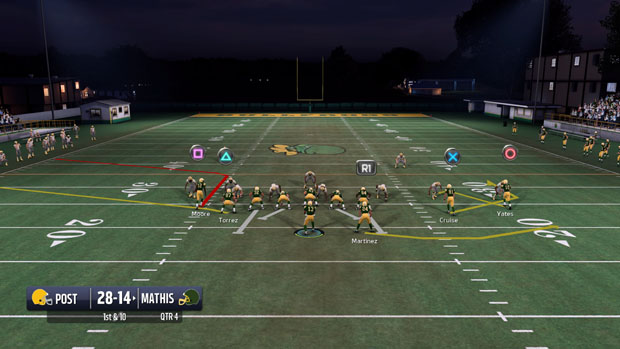 "For someone who was ostensibly a new player to the series, I really appreciated the scalability of the whole thing"

Tutorial mode also contains a pretty robust toolset to dive deeper into the mechanics and help players who want to grow with the game figure out how to play smartly. While through in what it covers, the game doesn’t really stop to be sure you’ve nailed down a concept or understand a mechanic, pushing onwards regardless of how you preformed in most situations.

Was Madden 18 a good time? For someone who was ostensibly a new player to the series, I really appreciated the scalability of the whole thing, allowing me to enjoy the game with a basic knowledge when in the past it felt like I required an encyclopedia on my lap to decipher plays. Longshot while being full of cliches really comes together in a great way to make a story mode that has no business being as interesting as it is and mechanically, this is a great way to get in some gridiron action.

Longshot is a worthwhile story mode that brings something fresh to Madden, scalable options provide an experience that any level of player can enjoy, tutorial helps bring sportsball virgins to Madden Elite.

Microtransactions drive major fantasy team mode. Tutorials introduce a lot, but never stop to make sure that information has sunk in.

Final Verdict:
GOOD
Longshot is a promising start to story mode for Madden, and with polish could become even more special. In all, it’s more Madden, but with a few flourishes that make it a decent time.
A copy of this game was provided by Developer/Publisher/Distributor/PR Agency for review purposes. Click here to know more about our Reviews Policy.