Blasting people is fun, but getting blasted and dying 30 seconds into a round isn’t quite as cool.

There is just something about being able to blast someone with a force beam and watching them slowly die. Ok, that sounds a lot more crazy and violent than I really wanted it to sound, but it’s also pretty true. This is where Magicka: Wizard Wars wins the day. At its core this is a DOTA style free to play game that allows me to suit up as a magic wielding wizard warrior that is basically engaging in a high stakes game of capture the flag.

The game started me off by teaching me the basics and it takes a little while to actually get it down. In fact, after I had “finished” the tutorial round, I got up, grabbed a pad and pen and started the tutorial over again so I could write down the different commands and combos I would need in battle.

There are three different game modes in Magicka: Wizard Wars but they all basically lead down the same path. While I said this game was DOTA-style, it doesn’t have a bunch of different characters to choose from that all come with different abilities. I got to change up my wizard character a little bit, but all the players in the game are basically faceless wizards in different colored robes. There are different abilities I could eventually gain and choose from, but really there are a couple of very basic attacks and defenses. 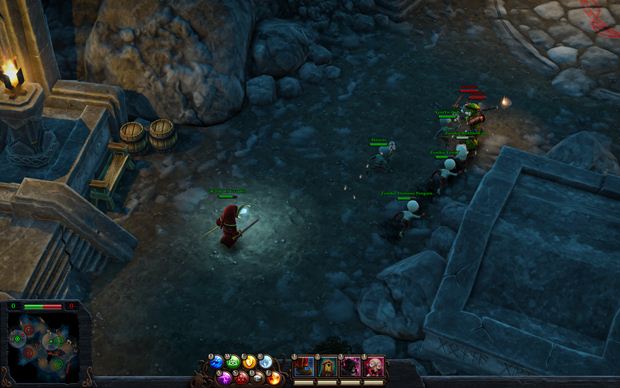 "It would be nice if this training ground mode was more than just shooting spells at a dummy because it didn’t really get me sharpening my skills."

Starting off, I was able to shoot a laser beam, an ice beam, a blast of fire or throw a giant rock. What makes this game both awesome and annoying is that once I took those four attacks, I was actually able to combine them with each other in order to hurt my opponents more, or combine them in such a way that I was actually able to protect myself against the attack. For instance, when someone started blasting me with flame, I could hit the right keys in order to douse myself with cold water and put myself out.

There are other combinations that were built in the game that allowed me to deflect other kinds of attack. Of course, this is also where the game started to grind its gears for me. The action moves quite quickly and for someone who hasn’t devoted their days to DOTA 2, trying to get better in Magicka: Wizard Wars is pretty hard in the heat of the moment.

This is likely one of the reasons the game has a Training Ground mode. It would be nice if this training ground mode was more than just shooting spells at a dummy because it didn’t really get me sharpening my skills. The other modes are Soul Harvest, which is one version of capture the flag, Wizard Warfare and Duel. The first two modes involve eight different players online in two teams of four. Duel was just me and one other person, having to fire off one attack or another and taking down the opponent as quickly as possible. 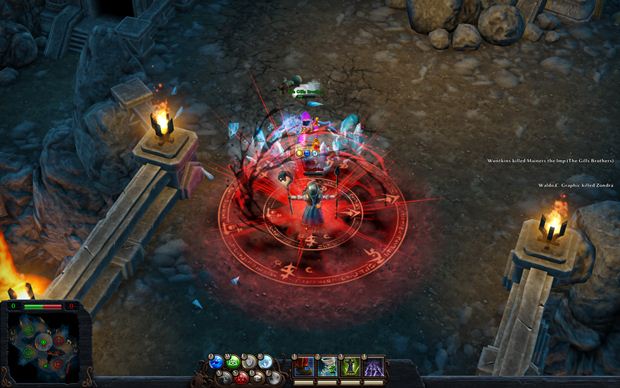 "In my time with the game, I enjoyed Soul Harvest the most, mainly because I could hide my shortcomings inside of a team, while also learning how to stand on my own. "

In my time with the game, I enjoyed Soul Harvest the most, mainly because I could hide my shortcomings inside of a team, while also learning how to stand on my own. The basic point of this round is to kill as many NPC monsters on the map as possible and every time I killed a couple, I could take their souls. Once a team gathers enough souls, their opponents totem loses its magical protections and is open to assault.

This is the same kind of totem that you see in DOTA 2, but instead of having a bunch of different turrets I needed to get through, the totems would fire off bursts of energy blasts that killed me quickly, if I attempted to attack before enough souls had been collected.

Team play also comes in handy because every wizard starts the game with a healing beam. I can heal myself as well, but it was much quicker to stick close to a teammate and have them blast me with healing power while I blasted them. Being able to heal up a teammate is actually a pretty big deal because I could also hurt anyone and everyone. Friendly fire is a real concern in all the team based games, especially when I was throwing around the beam or the fire blast. Many, many times one of my teammates would walk in front of me because they were either going to battle with another team’s wizard or an NPC monster and they’d pay the prize as I fired off my killing beam at whatever moved.

"To make up for the lack of characters, the game allows players to upgrade their wizard using coins earned through gameplay."

There are ways to communicate with teammates through the keyboard, though action is moving too quickly most of the time for it to matter. It’s possible that if I had enough people who were playing Magicka: Wizard Wars this might have been useful to form a real strategy. Because we were all strangers, everyone was running hither and yon and I didn’t even have time to type “sorry” after I killed one of my allies.

To make up for the lack of characters, the game allows players to upgrade their wizard using coins earned through gameplay. I could also purchase in-game currency using real money, if I wanted to give my guy a boost ahead of time. Better weapons, armor and spells are all available in the store and all of this continues to make the game look as though it really wants to be a kind of Dota 2 knockoff.

There are plenty of shortcomings with the game. Like a ton of other MOBAs, there aren’t a lot of maps to play. The three different game modes gave me some difference in maps but there wasn’t a whole lot to be impressed with. As far as MOBAs go, Magicka: Wizard Wars was plenty fun, but there wans’t enough new or innovative to make me go back into the game after a couple of rounds.

Having a bunch of different weapons and powers, and not needing to wait too long in between blasts or rock bombs is fun. The game is plenty fast paced and allows you to finish one round and start another in a short period of time. This means if you lose, you can always try for revenge.

The game certainly for newbies. The massive number of combinations that can be used to weave spells is neat, but in the heat of battle can be pretty hard to use. The maps and graphics aren’t really all that impressive.

Final Verdict:
FAIR
The game is plenty fun if you have a few minutes to kill, but this isn’t going to replace any number of other MOBAs that are already on the market.
A copy of this game was provided by Developer/Publisher/Distributor/PR Agency for review purposes. Click here to know more about our Reviews Policy.