Magnetic might have done more to stymie the obvious attraction to Portal.

Portal certainly wasn’t the first of its kind, and won’t be the last either, but it sure has inspired a lot of imitators. Magnetic: Cage closed has to be one of the most overt I’ve come across however. Following almost all the tropes without understanding the science that made Portal tick, Magnetic is an unattractive game that can be called a borderline knock off.

Thrown into a deep prison for a non-specific crime, you are a nameless, voiceless, yet decidedly female prisoner, and under the purview of a malicious prison warden and his staff. The dark halls of the prison are your new home for as long as you remain useful to the warden, and comply with the dangerous tests they run, (once again, reason non-specific).

The game can’t quite decide if it wants to go for the “show, don’t tell” storytelling that Portal lets you intuit, or tell a story of its own. The game is purposely vague, yet draws out exposition scenes. It makes you wait for storytelling it doesn’t want to give you and says about as little as it can get away with. 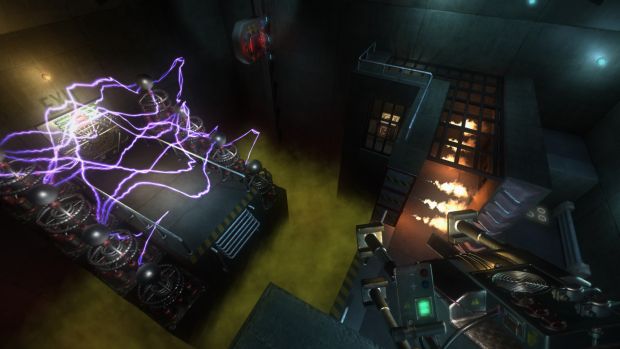 "The jail is dirty and dark, and feels like a place you don’t want to be. Unfortunately I’m not being metaphorical here. You don’t feel like you want to spend your time in this world. "

The jail itself is a dark and depressing backdrop for the gameplay, somehow not unlike the halls of Aperture Science, only with far less charm. While Portal had a sci-fi flavour that made everything look clean, yet foreboding, Magnetic sits a lot more heavy. The jail is dirty and dark, and feels like a place you don’t want to be in. Unfortunately I’m not being metaphorical here. You don’t feel like you want to spend your time in this world.

The physics altering gun the whole game revolves around is the steampunk looking “Magnet gun”, which from the get go lets you apply different levels of two separate polarities to different puzzle objects such as switches, platforms and the ubiquitous boxes. I never found a need to alter my power level, and in general the features of the magnet gun seemed to outstrip what you needed to use it for.

Basic uses for it like flinging around boxes works very well, and Magnetic uses most of its mechanics in interesting ways. Some of the other uses end up being interesting in some ways and hugely misguided in others. Sufficiently heavy objects will pull you in against a magnetic field instead of being pulled, which is used to make higher jumps and fling yourself into far away areas, but in other instances the magnetic kickback can send your careening off a suspended platform into gas below when you didn’t want to, which is simply frustrating and makes you wish they kept the elegance of form from the game they took so much else from. 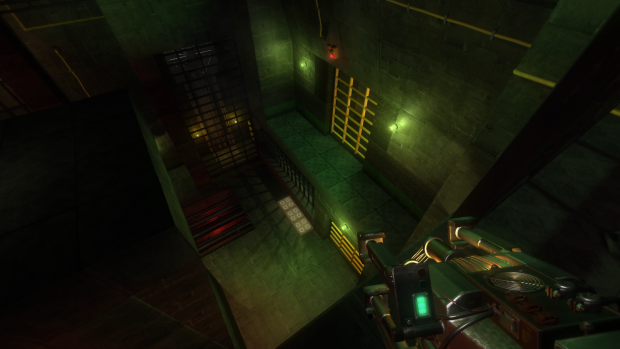 "The magnetic kickback can send your careening off a suspended platform into gas below when you didn't want to, which is simply frustrating and makes you wish they kept the elegance of form from the game they took so much else from. "

The disembodied voices of the warden and his staff also scream of trying to be GlaDOS without understanding the intricacies of her character. The warden in particular is a gruff man with all the malice and disregard for life that GlaDOS had, but without any of the biting wit that made her memorable. He’s just unpleasant and annoying in turn, and the others in the cast are either no better, or lack any personality at all.

We’ve touched briefly on how Magnetic looks, which is depressing. Audio design is very much the same, with little to no musical accompaniment, and too subtle to be memorable when it is. At least I can say it controls smoothly, and the mistakes you make aren’t going to come from unresponsive aiming.

One of the things the first Portal is most remembered for is the relatively short length it had. It knew how many ideas it had and didn’t outstay its welcome. Magnetic doesn’t have that kind of awareness, and it drags on because of that. The ideas flow with the consistency of that last bit of toothpaste by the third hour, and the chambers seem to run together. 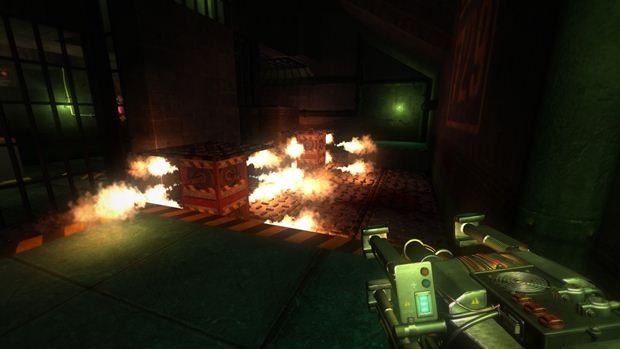 "The almost Hannibal level level infatuation with it’s contemporary feels like it held some interesting play mechanics back, which simultaneously not understanding the softer touch that made Portal so important. "

At the end of each segment, you’re presented with a choice test, which at the end of the day, decides little more than which same feeling gauntlets come up next. Still a fun little, “choose your own adventure” twist that might offer some feeling of replay value I suppose. The in story sections never feel like they have the weight that it expects it to have, rather it feels like choosing a button that decides which series of puzzles you’ll tackle next.

Magnetic: Cage Closed feels like it wants to be Portal so bad that it hurts, which is a shame because it has some really interesting ideas that it might have ran better in a different setting. The almost Hannibal level level infatuation with it’s contemporary feels like it held some interesting play mechanics back, while simultaneously not understanding the softer touch that made Portal so important.

Magnetic has some unique ideas with the magnet gun, which does almost everything that makes the game unique.

Unfortunately, the ideas run thin far before the game is done, and almost everything else it does is trying to be Portal without a basic understanding of why Portal worked. From presentation to play, Magnetic doesn't feel like it has an identity.

Magnetic has potential, but fails to reach it due to how hard it tries to be Portal. If it had tried to focus ion its own gameplay and kept it as pure as Portal, they might have had something special. As of now, it exists, and that's all that can really be said about it.

A copy of this game was provided by developer/publisher for review purposes. Click here to know more about our Reviews Policy.
Tagged With: Magnetic: Cage Closed, Steam