The worst Mario & Sonic game yet.

As if the title wasn’t long enough. Mario and Sonic at the Sochi 2014 Olympic Winter Games [ referred to as Sochi 2014 in this review] is best described as an over-complicated jargon of entertaining mess. Sochi 2014 stands out as a prominent example as to where Nintendo is going wrong with trying to establish the Wii U as a next-gen console and not an attachment for the Wii. It’s also understandble as to why they’ve been receiving so much negative feedback from both consumers and developers. Nintendo’s strong-hearted faith in motion control gimmicks is what holds Sochi 2014 from being an easy pick up and play investment, which is what it should be.

One of the first things the player will notice upon deciding which Winter sport to take part in, once they’ve familiarized themselves with the menu, is the bare bone options of actual game events that are actually playable when playing solo or without additional controller accessories. Ninety percent of the game modes and events available require the use of an original Wii-mote or an additional player. This proves to be a serious problem as there’s so many events to choose from, all sectioned out between five main criteria on the game’s main menu. 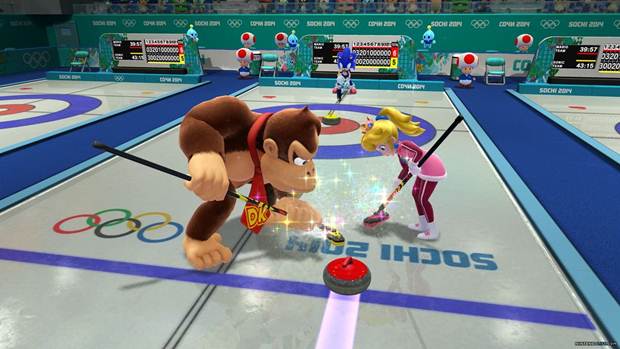 "Sochi 2014 is clearly catered towards parties and groups of people, and those who choose to play solo are left scrounging for events to take place in."

Sochi 2014 is clearly catered towards parties and groups of people, and those who choose to play solo are left scrounging for events to take place in. With only the gamepad in connection to the console, two of the game’s main competitive modes were immediately locked off from play, leaving only the single match events as a viable option. Moving forward to this selection becomes a series of more requirements and tutorials in order to play the game. Navigating the various menus feel like a choir of trial and error. The immense selection of events to take place in is where the game holds some strength as well as replay-value, but this only applies to co-operative play.

The requirements feel like a cruel trick playing against your excitement and initial thoughts of the game before hand,aswell as your nostalgia of lovable characters. Nintendo has reached a point in their gaming reputation where they’re expected to deliver on two things, unprecedented enjoyability from simple ideas, and reoccurring nostalgia that people will never get bored off. This falls rather flat here as the simple task of actually playing  feels like a waiting game of being stuck in an online-lobby paired with a bad network status.

Once you do gain access to an event  the excitement you get back from the game is largely dependent on your tolerance for motion controls. As every event in the game requires the use of steering, leaning, and pacing like a wild geese, the Wii U’s pro controller is completely off limits here. The tablet gamepad, an original Wii-mote, and additional people are the requirements for this game. This is a real shame particularly with its use of motion controls. 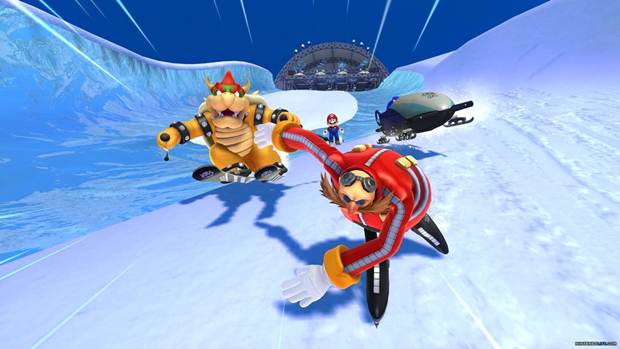 "The problem with the integration of motion controls for the most part of gaming as a whole, not just Sochi 2014, is the way in which it's implemented in portraying your characters movements versus your own."

Accessing the pause menu you’re expecting to find an options menu giving the choice for display brightness, audio settings, controls and the like. These are completely banished and the choice to play strictly with the controller’s analog stick or D-pad as a means for character control is not insight. This proves to be somewhat of a serious problem as the motion controls are neither fun nor accurate in translating your movements from your body to the system, it makes absolutely no sense as to why motion controls where considered in the first place.

The problem with the integration of motion controls for the most part of gaming as a whole, not just Sochi 2014, is the way in which it’s implemented in portraying your characters movements versus your own. Shadow the Hedgehog swaying left and right on a snowboard while I tilt the Wii-U’s gamepad looking like a madman attempting to drive an automobile, is not an ideal scenario for both social reasons and general entertainment.

Regardless of the game’s many hiccups and high requirements for actually playing, this isn’t to say the game isn’t fun…only when it can be. Sochi 2014 throws in all the Olympic winter sport events you could possibly think off. Everything from the obvious snowboarding, skiing, and ice hockey are present here. As well as the more extreme and enjoyable ones such as bobsleigh, figure skating, and street hockey. 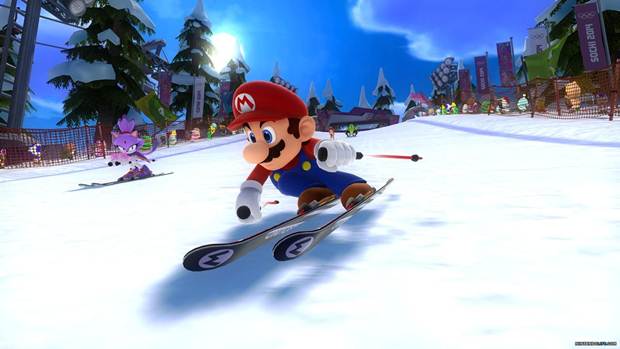 "As far as level design goes Sochi 2014 is second to none. Each and everyone of the game's stages and levels manage to accurately capture the elements and assets you're already used to seeing in both Sonic's and Mario's very different worlds."

As the game stays as far away from realism as possible, it’s best that you throw away your knowledge of these sports and come to terms with the fact that they take place in both Sonic and Mario’s universes. This also means more room for experimentation, more reason to mix things up, and no excuses not to go crazy with level design, and it shows.

Each sport within the game expands on what you think you know. Figure skating for example comes in more than four varieties that works its way into other variations of craziness and entertainment all taking cues from both Mario and Sonic’s influence. This is an obvious factor within its level design and its great to see so much variation coming from just one sport. Add this to the fact that every sport in the game mixes itself up in someway or another and you’re left with a near infinite amount of choices to indulge in.

As far as level design goes Sochi 2014 is second to none. Each and everyone of the game’s stages and levels manage to accurately capture the elements and assets you’re already used to seeing in both Sonic’s and Mario’s very different worlds. The influence here is strong and while other Nintendo fan favorites are present, Donkey Kong, Wario, Yoshi and so on, Mario and Sonic seem to take the lead here and rightfully so. 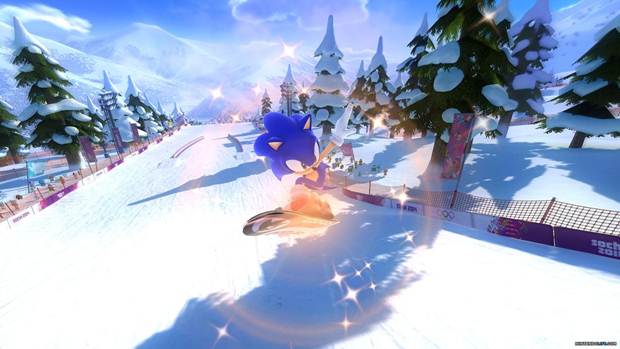 "Sochi 2014 feels unpolished, non-fully fleshed out, and fails to stand out in its own identification, it's just another party game."

Sochi 2014 accomplishes its goals in delivering fun and excitement to those playing as a group of people, but the lack of single-player experiences not to mention an actual story mode shoots itself in the head. Mario’s repetitive nature of rescuing the same Princess for  the last twenty plus years, coupled by Sonic’s more adventurous journeys that plays out like a Saturday morning cartoon show, cause the two rivals to crash in a fairly disappointing reason for being in the same game.

Mario and Sonic crossing each others paths has always sounded like a good idea on paper, but the execution in how this actually takes place results in a non-fully fleshed out party game where the closest thing in  range of a narrative is a sub division of sports events, that’s not even a main focus of the game. I’m not suggesting that an in-depth storyline is needed, nor does the game need to take itself to seriously.

The difference between this game and say that of Wii Party U, would be the replacement of playable game events and the re-skinning of generic Miis to that of Knuckles, Peach, and Donkey Kong. Sochi 2014 feels unpolished, non-fully fleshed out, and fails to stand out in its own identification, it’s just another party game. 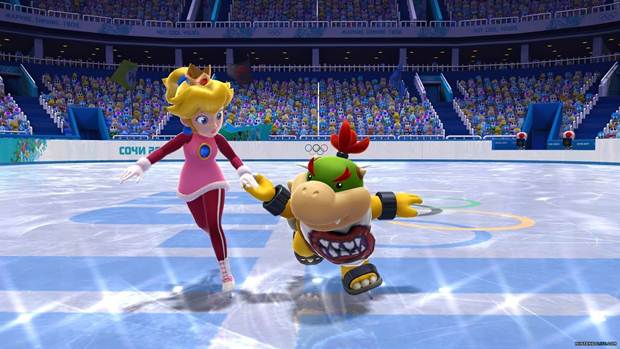 "The game's visuals are by no means a benchmark for what the system is truly able to pull of."

Coupled by mandatory motion controls and the need for additional controllers supplied by an older console, and it’s no wonder why the average consumer is still under the impression that the Wii U is an add-on accessory for the original Wii. Frankly it may as well be, since the game that’s supposedly meant to be played on the Wii U is eighty percent bricked without an accessible Wiimote, there’s no reason whatsoever for the game to actually have an existence on the system, other than minimally updated visuals that wouldn’t have been possible otherwise back on the original Wii.

The game’s visuals are by no means a benchmark for what the system is truly able to pull of. No, that will forever remain a waiting game for something we’ll never get to see. Until such time Mario’s looking as good as he’ll ever get, no complex shadows are needed here and lighting effects won’t make it that much more immersive against a winter backdrop of snow and ice. The obvious jaggies are here though, but for the most part it’s a pretty looking game. Level design is where the game’s visuals are taken to the fullest, and it’s in the influence of these character’s worlds where the environmental assets are noticeable.

Straying on the subject of visuals and immersion, I didn’t appreciate the Bobsleigh event turning on my Wii U’s Gamepad camera and throwing me onto the screen. Being forced to focus on both the main TV for gameplay aswell as the screen-hogging tutorials and hints, consistently popping up between the TV and the gamepad is a pain. Seeing myself relish  in my own cause of frustration became somewhat of a distraction.

Overall. Mario and Sonic Sochi 2014 is fun when played with a group of buddies but in the end it’s what it is…a underwhelming party game. Give it a shot if you are still impressed by the idea of motion controls otherwise there is nothing new to be seen here.

Mario and Sonic Sochi 2014 is without adoubt a source for pure fun when playing with friends.

The need for additional controllers from an older system became a path of trial and error for what's actually playable without them.

Final Verdict:
MEDIOCRE
If you meet the requirements and are still convinced by motion controls as a viable option over traditional gamepad useability, this game is your friend. Those not particularly fond of this method may want to pass.
A copy of this game was provided by Developer/Publisher/Distributor/PR Agency for review purposes. Click here to know more about our Reviews Policy.