Posted By Rashid Sayed | On 15th, Oct. 2009 Under Reviews | Follow This Author @GamingBoltTweet

I love comic books, superheroes, and the X-Men Legends/Ultimate Alliance franchise.  When these games come out, I know I’m going to enjoy them.  When Marvel Ultimate 2 fell into my hands, I was more than happy to dive into the game and let my inner nerd go wild.  I’m pleased to write that UA2 is a very fun game, but it is not without its share of shortcomings.  Without further ado, we’ll jump right into the story that serves as the game’s premise.

For those of you who are deprived of the wonderful world of comic books, I’ll fill you in on a little background story to this game.  The game focuses on the “Civil War” mini-series that Marvel released a couple years back.  Superheroes have been deemed unsafe because of a string of events that resulted in the deaths of many innocent civilians.  Because of this, the government has passed the SRA, or Superhuman Registration Act, which requires all superpowered persons to register their identity and be employed by the federal government.  Obviously, there are many superheroes who would like to keep their identity secret and refuse to register.  These heroes become outlaws and fugitives, and the heroes who do register are required to hunt down and apprehend their former friends and teammates – hence the “Civil War”.  This story is quite compelling, and the game really does a good job of implementing it by allowing you to choose your side in the war and follow its events to the story’s conclusion.  As far as depth goes, it really depends on how much time you want to spend in dialogue with characters found throughout the game.  There are plenty of conversations to be had, but not all of them are very enjoyable.  Where the game really shines is in the action, and there is plenty of that to go around. 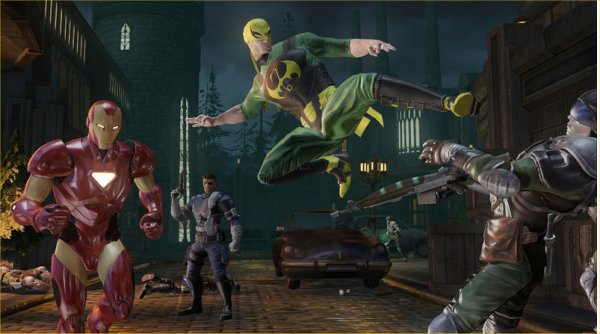 The action in the game is what has come to be expected from the franchise.  Each character has the generic combat moves mapped to the face buttons, which become more character-specific “special” moves when R2 (or RB) is pushed as well.  In my opinion, these special moves are more polished than in previous installments and are genuinely fun to use against baddies.  The most powerful moves available are new to this installment and are dubbed “fusions”.   These fusions combine the powers of two characters and are also very fun to use.  Although this action is a lot of fun, one of the biggest complaints many players, including myself, have had about this game is the lack of variety of special moves and fusions.  Many of the fusions are recycled among different player combinations and seem to reflect a general laziness of the game designers.  Furthermore, in previous installments characters had close to ten different moves that could be assigned to the four face buttons, whereas in UA2 each character only has the 4 moves that they are given from the outset.  As a rule, more choices is almost always better.  Why the developers decided to give each character FEWER moves is beyond me.

The maps in the game are pretty sharp and varied enough not to give the player a sense of repetitiveness.  Because the game allows you to play from each side of the war, there are plenty of levels to play through with many secrets and upgrades to be found throughout.  Finding them however, is something that is more difficult than it should be because once again the developers made an odd decision – no on-screen map.  In previous games, there was an on-screen map that showed where you were, where you had been, and where you hadn’t been.  In UA2, the map can only be accessed via the pause menu.  This really interferes with the flow of the game and is just a nuisance.  As if that wasn’t enough, the camera can really be frustrating at times.  It can be controlled to an extent, but many of the levels (especially indoors) can become really annoying to navigate because of the camera.

As far as controls go, the game delivers quite adequately.  The game is really easy to jump into and makes a great multi-player game for players of all skill levels.  UA2 is really a blast when played with 4 players either online or off.  The character roster is big enough (24 + future DLC) that everyone will be able to find a character they enjoy using, as each character brings something unique and useful to the team.  Also, using different characters opens up different dialogue interactions within the game, so playing through the game multiple times does have its appeal. 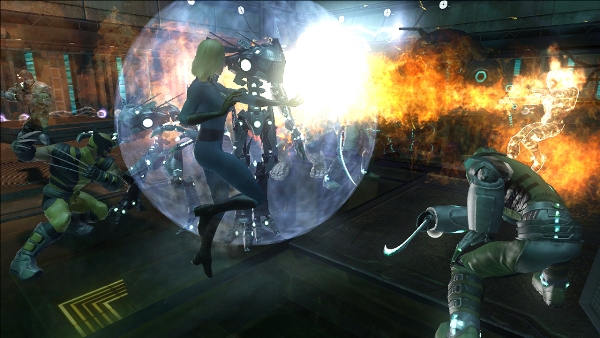 Speaking of dialogue, the voice-acting is a little hit-or-miss.  Some characters such as Spider-Man, Wolverine, Gambit, and Deadpool are pretty spot-on and don’t dissappoint.  On the other hand, characters such as Thor and Hercules are a bit over the top and seem out of place.  As far as other in-game sounds, the explosions, punches, powers, and so on really sound great and are fun to hear using surround sound.

In the end, Marvel Ultimate Alliance 2 delivers an action-packed adventure that will bring hours of entertainment to comic book fans and new c0mers alike.  I would be remiss not to point out the games various shortcomings, but what the game does well certainly outweighs what it does poorly.  With plenty of secrets, simulator missions, and trivia the game has plenty to keep you busy.  Superhero fans really shouldn’t miss this game.

Upgraded graphics. Compelling story material. Plenty of usable heroes (and villains). Action-packed and enjoyable multi-player for up to 4 players.

Not as long as previous installments. No HUD map. Claustrophobia-inducing camera. Too few moves for each character.

Ultimate Alliance 2 is an enjoyable superhero action RPG that takes a few steps forward for the franchise but also takes a couple puzzling steps backward.

A copy of this game was provided by developer/publisher for review purposes. Click here to know more about our Reviews Policy.
Tagged With: activision, Marvel: Ultimate Alliance 2, ps3, superhero, xbox 360