The return of the franchise promises a lot of characters.

Nintendo’s unlikely revival of the Marvel Ultimate Alliance series was a welcome surprise to Marvel fans and Switch owners when Marvel Ultimate Alliance 3: The Black Order was revealed at the end of last year. The Team Ninja-developed title looks both different and familiar from the older titles, but one way they’re both the exact same is the promises of an array of playable characters from the Marvel world- even those that aren’t featured in the popular films. We already have quite the list, with the likes of Spider-Man, Wolverine, and the Guardians of the Galaxy. Now we know of two more super heroes we’ll be able to crack skulls with.

Via Game Informer, Nintendo has revealed that Hawkeye and Ms. Marvel will be playable in the game as well. Most people are well aware of Hawkeye due to his roles in the Avengers films. Ms. Marvel may be a little less known. She’s taking the moniker Carol Danvers (who most know as Captain Marvel now) once had, and is a Pakistani-American named Kamala Khan who was the first Muslim character to headline a Marvel comic book series. You can see concept art of both below. 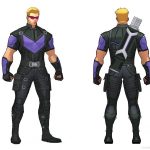 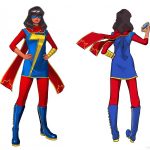