Marvel’s Avengers is shaping up to be an excellent looking game.

With superhero movies arriving left and right, two years is a long, long time to wait for an Avengers gameplay trailer. I mean who knows who Thanos could’ve killed in that time? In all seriousness, though, development on the 2020 Avengers game (simply titled The Avengers) is full steam ahead at studio Crystal Dynamics and after a healthy 14-minute E3 presentation, we were actually interested in a superhero game for a difference.

Recently, though, Square Enix, released the entire tutorial-prologue level of the game. While the code’s not final, this gives us a proper look at the tech being deployed, both in terms of cutscenes and actual gameplay. 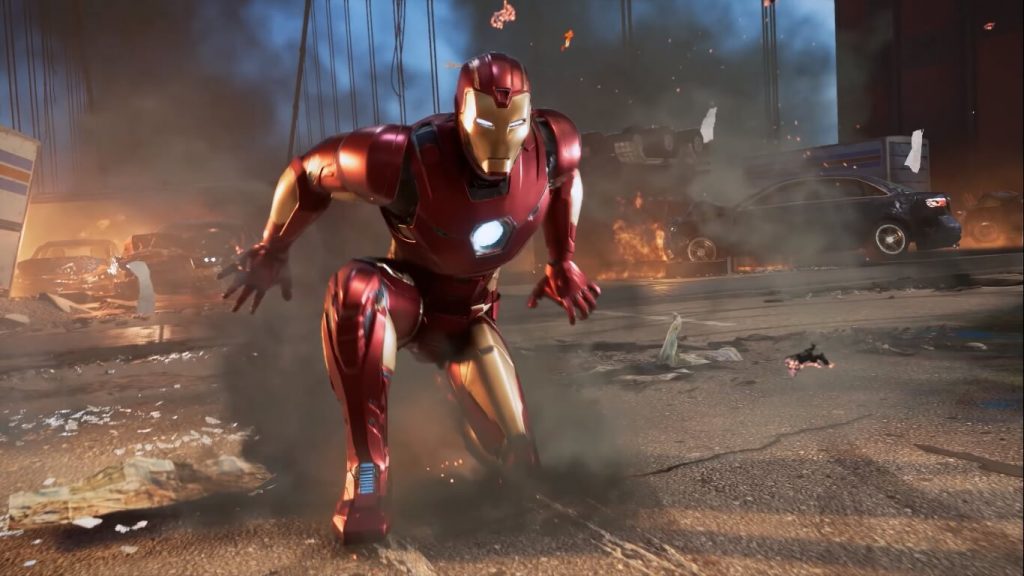 With Crystal Dynamics developing the title, Marvel’s Avengers is built on the Foundation Engine. This is interesting because of the performance and scaleability implications.

Because a large part of the engine is spent exploring poorly-lit interiors, light and shadow play a key role–the Foundation engine utilizes deferred rendering to cheaply implement multiple lightsources. This carries over to Marvel’s Avengers, but with different objectives in mind–much of the action in Avengers takes place in constrained, outdoor environments. A lot of the spectacle comes from particle-heavy effects. Dense, emissive particle effects are the key takeaway here–when Hulk throws a flaming car across the Golden Gate bridge, the emissive lighting tracks across the road. We see optimizations in the footage Square Enix showed, light sources up close are emissive, but distant light sources aren’t. Regardless, in game, this greatly enhances the moment to moment spectacle.

Physically based rendering is most impactful when there’s a large amount of metallic surfaces on display. Avenger’s urban environments have plenty of these–from cars and tanks to bridges. We’re happy to note that Crystal Dynamics has significantly improved on their material rendering pipeline here, delivering physically accurate materials that provide a convincing backdrop to the extensive particle effects. 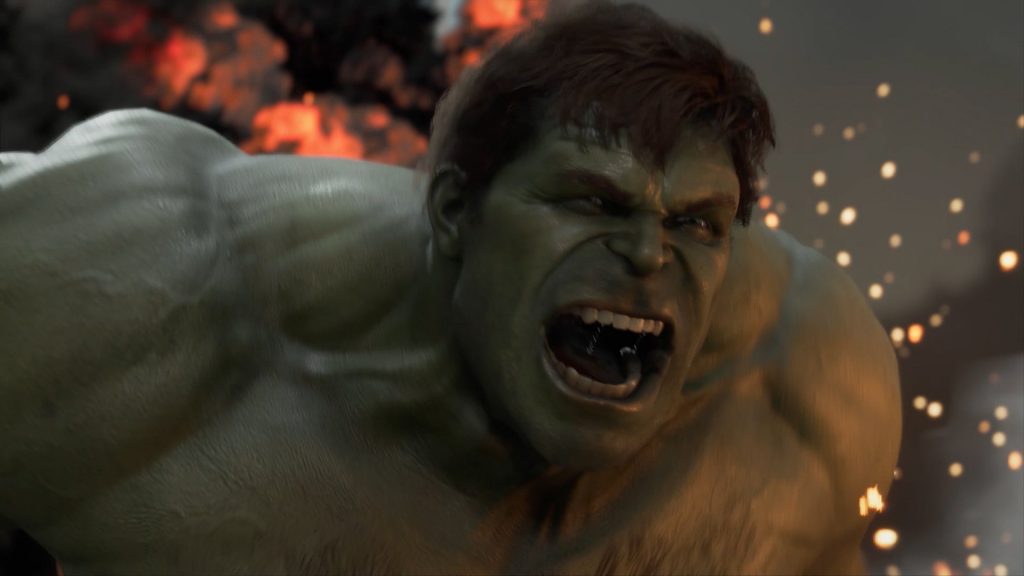 WIth an increased focus on the narrative experience, Crystal Dynamics invested a lot towards character rendering. As a consequence, cutscenes looked superb and frequently gave Uncharted 4 a run for its money. While Avengers is a third-person beat-em-up, we’ve seen a lot of cutscenes in the material Square Enix has shared so far, including in the prologue level. This is a departure from the mindless brawling we were expecting and Crystal has repurposed Foundation’s character rendering approach to great effect. Subsurface scattering is deployed on skin surfaces and, together with high resolution 4K texture work, each Avenger looks convincing. There’s a lot of high-frequency detail present, such as individual notches on zippers–we expect the game will look stunning at 4K. Models are suitably detailed, with five-figure poly counts. Considering that much of the action is linear and up-close, Crystal can afford to invest a big part of the polygon budget towards life-like character rendering.

PureHair is another character rendering feature that carries over to Avengers from the engine. Square Enix studios are among the few that actually leverage AMD’s excellent open source hair rendering solution. Purehair uses GPU compute to render a high volume of dynamic, physics-based hair, with over 30,000 strands per character. Avengers features plenty of long-haired character models. PureHair makes Thor’s locks flow convincingly, without the massive performance penalty of, say, HairWorks.

We’re seeing what looks like a high quality temporal AA implementation here. The engine offers SMAA and extremely intensive SSAA. Since Avengers utilized a deferred renderer, MSAA isn’t viable to implement here. While there is a slight loss of detail, the game’s cinematic art direction works well with a softer presentation. And the temporal stability, together with the excellent motion blur, provide a uniquely smooth experience, even at the 30 FPS console standard.

Particle rendering is a major part of the technical spectacle in Avengers, and Crystal has evidently invested a considerable amount of time in this department. In a superhero action game, particle effects are especially important, since the moment-to-moment gameplay centres on “blowing things up.”  Particles appear to render at full resolution. This is great for console players who typically have to make do with half or even quarter-res particle effects in many games. Volumetric particle volumes in-game receive and emit light. Explosions create fireballs that emit light onto nearby surfaces. Meanwhile other light sources, including the sun, cast light on particle volumes. 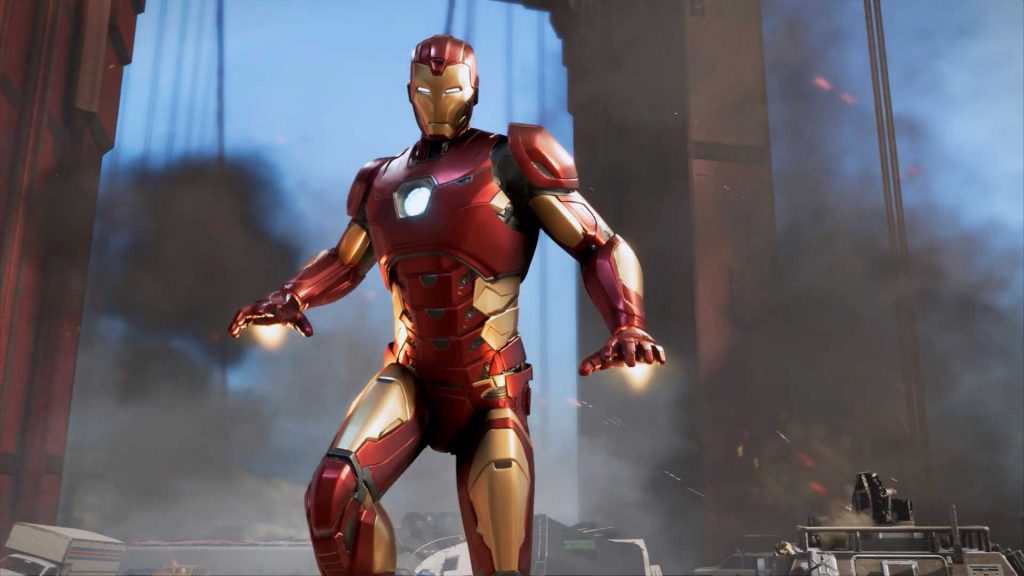 Crystal implements a whole range of post-process techniques to great effect here. We were particularly impressed by their high quality motion blur. This is an expensive motion blur implementation, with a high sample count. However, the pay-off is in very smooth camera panning and object movement. Objects explode and go flying at every direction at almost every point during gameplay. This makes high-quality motion blur very important in lending the game its cinematic flair. We see bloom lighting implemented as well. Extensive use of bloom works with Avengers’ bigger-than-life art style, and gives explosions added oomph.

Crystal deploys their  BTAO ambient occlusion again here in Avengers. PC gamers will likely have the option of opting for higher quality HBAO+. However, BTAO delivers reasonable, temporally stable ambient occlusion, with good coverage and not too much “haloing.”

Depth of field also makes the cut, with a higher quality dynamic depth of field implementation during cutscenes and static DoF in the far background used during regular gameplay. We see limited use of radial blur as well, particularly during special attacks.

Marvel’s Avengers both looks and plays well, if the gameplay trailer and prologue level are anything to go by. But, regardless, this is shaping up to be a very interesting superhero title, and not just from a purely technical perspective.