Marvel’s Guardians of the Galaxy: The Telltale Series Season One Review – Hooked on a Feeling

It’s hard to believe, but Marvel’s cinematic universe has been running for nearly a decade now. The original Iron Man came out in 2008. At the time, I was still in high school. Now, I’ve finished graduate school and we’re still waiting for Thanos to show up and actually do something. My point here, aside from the fact that Marvel has really dragged this thing out, is we’ve been watching these movies for a long time.

My interest in the MCU has ebbed significantly over the last few years. They’ve just taken too long to get anywhere. At this point, waiting for the Avengers to fight Thanos feels like waiting for Duke Nukem Forever to release. I mean, we all knew it was gonna happen somehow, but by the time it came around, most of us didn’t care anymore. That’s how I feel about the MCU at this point, with one exception: the Guardians of the Galaxy movies.

Guardians just feels different. They’re not really superhero movies. Instead, they’re wonderfully wacky and unique sci-fi films that barely tie into the Marvel universe at all. This also means that, unlike in the other Marvel movies, these movies are allowed to stand alone and the things that happen in them matter. Characters die. Relationships change. Actions have consequences. It’s almost like they’re real movies, or something. In an entertainment industry built on regurgitating the same tired plots, franchising everything, and maintaining the status quo, these movies are a breath of fresh air. That’s probably why they’re Marvel’s most consistently successful sub-series at the box office, outside of The Avengers and Age of Ultron. 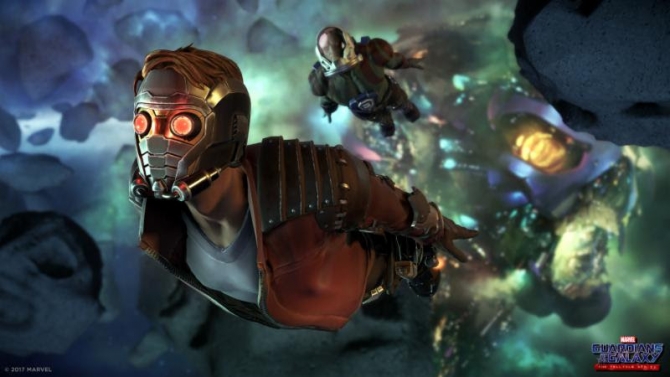 "Telltale has never been known for their game design chops, but things largely work out well here. The Quick-Time Events are largely enjoyable, the puzzles are fun, and everything more or less works the way you’d expect it to."

All of this makes them a perfect group to receive the Telltale treatment. Like all Telltale games, Telltale’s Guardians of the Galaxy takes place in its own universe. You don’t have to have seen the movies the movies or read the comics to know what’s going on here. Those who have will appreciate the little details that Telltale have sprinkled throughout the game, but those who haven’t shouldn’t be lost. This extra level of freedom lets Telltale play in the Guardians’ galaxy (I’m not sorry) without worry about repercussions and the game is better off for it.

If you have played a Telltale game before, you’ve probably got a pretty good idea of how Guardians of the Galaxy operates. You’ll talk to characters, make choices, walk around environments, solve puzzles and complete Quick-Time Events… and that’s about it. Telltale has never been known for their game design chops, but things largely work out well here. The Quick-Time Events are largely enjoyable, the puzzles are fun, and everything more or less works the way you’d expect it to. It’s all fine, but outside of a couple of sections, never exceptional.

There are some problems that carry over from previous Telltale games: the camera angles can be a bit awkward, which means it takes a little extra finagling to get around in some areas. Likewise, it’s always easy to get stuck on parts of the environment that don’t look like they should trip you up. Like most Teltalle games, Guardians also has technical glitches. At a certain point in Episode 3, I was listening to a character tell a story while the Guardians were gathered around a table. At a certain point, she just stopped talking and I was booted from the cutscene I was in into the room proper, while everyone else stood stock still on or around the table. It was funny, but the only way I could fix it was closing and reloading the game. It was the only issue I had, but it’s not the only issue people have reported with the game. 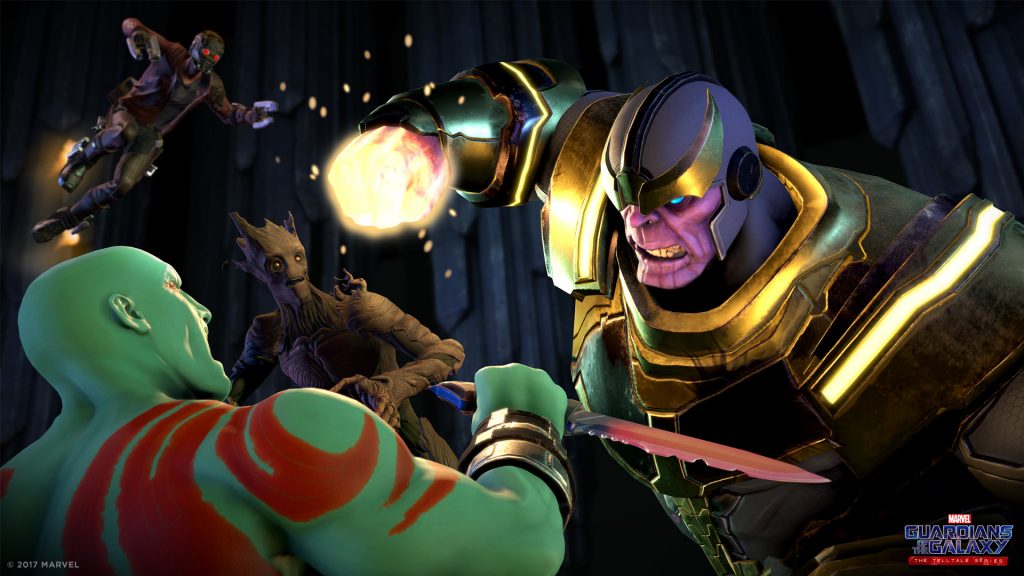 "Guardians of the Galaxy’s story really deserves to be experienced blind – it’s that good, and it rarely goes the way you think it will."

By this point, we’re used to putting up with the bugs in Telltale games, and you don’t really play them for the gameplay. Telltale are at their best as storytellers, and that’s why we play their games. I’m happy to report with Guardians of the Galaxy, they deliver. The story starts off simply: the Guardians are called to help the Nova Corps – Marvel’s space cops – deal with Thanos. Without spoiling too much, the Guardians come into possession of an ancient artifact – the Eternity Forge – that has the ability to bring back the dead, and as you’d expect, things go crazy from there. I don’t want to give away any more than that because Guardians of the Galaxy’s story really deserves to be experienced blind – it’s that good, and it rarely goes the way you think it will.

At its heart is a firm understanding of, and love for, these characters – Peter Quill (aka Star-Lord), Gamora, Drax, Rocket, and Groot. They all feel right – Peter cracks wise, Rocket’s a selfish jerk, Drax is a lovable warrior who doesn’t know how to be subtle, and Gamora is damaged and wants to do the right thing. As for Groot – well, he’s Groot. But even he feels right. Watching these characters interact with each other – whether sharing their joys and sorrows, bringing each other happiness or causing each other pain – is a delight. You’ll primarily play as Star-Lord, but you switch to other members of the team during combat or for specific scenarios, which ensures that no character gets left out.

This is important, because Telltale makes us care about them. The Guardians are all very damaged people who are defined by their pasts, and watching them work through their issues together is often joyous, heartbreaking, relatable, cathartic, silly, and sad. This is a story about family, loss, grief, responsibility, and the relationships we build with others and it’s never anything less than compelling. Those who are fans of the characters will love what Telltale does with them here, and newcomers will figure out why the rest of us love them so much. I have to give special praise to the writers, voice actors and animators here – the writing’s great, performances are excellent, and the characters are  vividly rendered. Things aren’t always perfect but the highs are so high and the lows so minor and far between that it’s easy to forgive them when they show up, which is mostly in Episode 1. 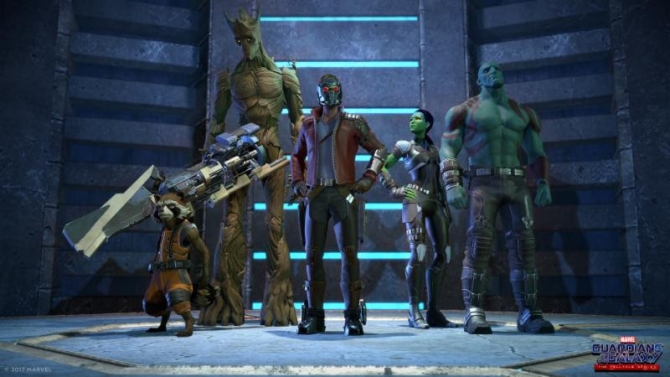 "The soundtrack is absolutely stellar, featuring cuts from the likes of Hall and Oates, Heart, and Electric Light Orchestra."

The other thing I want to point out is how much freedom the game gives you. Your choices really matter here, which is something that hasn’t always been true of these kinds of games, even the excellent ones – I’m looking at you, season one of The Walking Dead. Also you, Mass Effect 3. Here, that’s not true. Characters can die and relationships will be fundamentally altered by the choices you make. While playing, it feels like many of these decisions could only go one way, but I was shocked to see how different the game was depending on the choices you make. This is a game that demands at least two playthroughs, probably more, to see all it has to offer. What’s crazier is that Telltale holds all of this together while rarely letting us see the seams.

The other thing Telltale gets right is the soundtrack. Anyone who has seen the films or read the comics knows that music is a huge part of Guardians of the Galaxy. Telltale knows that, too, and they deliver here. The soundtrack is absolutely stellar, featuring cuts from the likes of Hall and Oates, Heart, and Electric Light Orchestra. Each one is used at just the right time, and if you’re like me, this soundtrack will be playing long after you finish the game. The one I find myself listening to the most since I completed the game is Three Dog Night’s “Shambala,” but the standout is the one that accompanies a particularly memorable sequence at the end of Episode 4, and I will not spoil it here. I will say, however, that it’s a band I didn’t expect to hear and say that whoever thought to use that song for that sequence deserves a raise.

Licensed games are hard. They have to use the license properly and tell a story we haven’t heard before while treating the property in question with respect and getting the little details right. Guardians of the Galaxy is the rare licensed game that manages to do it right, and another feather in Telltale’s already illustrious cap. Nobody else makes games like this this well. That’s a shame, but it serves to reinforce what a great studio Telltale is. I had a blast trekking around the galaxy Peter, Gamora, Drax, Rocket, and Groot, and I hope I get to do it again soon with Telltale at the helm.  What can I say? I was hooked on a feeling. Ooga-chaka.

Occasional bugs. Awkward camera angles. Easy to get stuck on the environment. Animations sometimes look off. Episode 1 is the weakest link.

Final Verdict:
GREAT
Strong writing, great performances, an engaging story with choices that matter, and a fantastic soundtrack make Telltale's Guardians of the Galaxy an intergalactic ride worth taking. Just don't forget your Walkman.
A copy of this game was purchased by author for review purposes. Click here to know more about our Reviews Policy.