Mega Man Legacy Collection Review – A Step Below The Rest

Almost 30 years later and still just as blue and as bombery as ever.

Originally conceptualized and created by Akira Kitamura, Mega Man was the anti-Super Mario Bros. It was difficult, unforgiving, and often, very cruel with its tremendous gaps and “just short” jumping ability. Mega Man was a game that brought forth legends; separating the boys from the men. 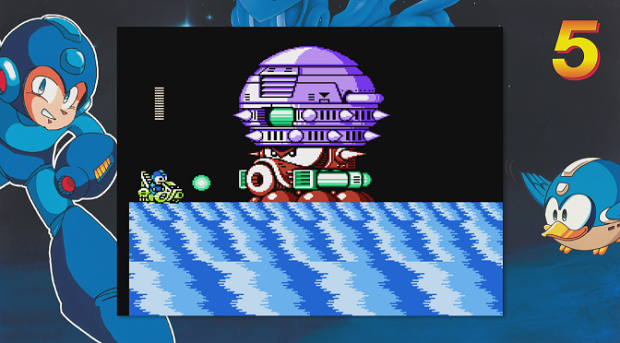 "A criterion of originality, the Mega Man Legacy Collection captures the first six Nintendo games all in their original format for a great, low price."

As time went on, Mega Man 3 – 6 followed, and still upon the original Nintendo, for many more years. But gamers had moved on to Super Nintendo a year to two years prior to Mega Man 6’s release in 1993, bringing a close to the golden age of 8-bit gaming for the series. Mega Man proved so much a success, however, that it survived and continued to expand to Super Nintendo with Mega Man 7 – 8 in much newer, and a much improved graphics style; while still maintaining its gruelingly hard, but brilliant level design. Spinning off onto many different consoles and into many different directions and series’ such as Mega Man X, and Mega Man Battle Network, it felt as though Capcom wasn’t confident in which direction to take Mega Man any longer and ignored the blue bomber for many years. Capcom returned to the blue bombers roots years later in 2008 with the triumphant return to 8-bit platforming in Mega Man 9. Then two years later followed up by Mega Man 10. 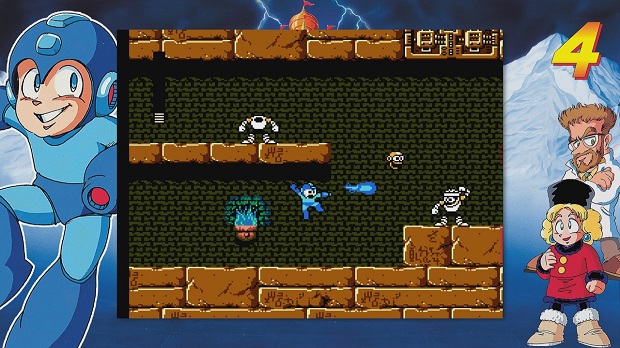 "Taking a cue from Rare Replay, Capcom added a Challenges mode in their own style. Mixing different levels and groups together, play as Mega Man through several miniature challenges to beat the par time given at the start."

However, this isn’t the first Mega Man compilation released in the past decade, and possibly not the last. Strictly released as a digital download, Mega Man Legacy Collection tries to shine with its original charism, but falls short of a truly “here and now” pinnacle in Capcom’s history. All six Mega Man games play exactly like they did on the original Nintendo. The controls feel as tight as ever (albeit the jump is as sluggish as any NES game of its time). Memorable level designs are still, so brilliant. And that 8-bit, colored palette that screams 80s, along with the infamous story arch of Dr. Willy and Mega Man continue to hold true through the decades.

Along with the six, uber, nostalgic games comes a small batch of extras on top. A Music Player, which showcases each game’s original soundtrack that includes all the stages; boss fights; opening and closing credits; and much more, is accessible right at the main menu. A collection of concept art of various characters, and booklet art is immediately available to view in what’s called the Museum. As well as a simple Database that introduces each character from their
respective games in a short paragraph form.

Taking a cue from Rare Replay, Capcom added a Challenges mode in their own style. Mixing different levels and groups together, play as Mega Man through several miniature challenges to beat the par time given at the start. These challenges can range from level-skilled accomplishments to boss battles, and include around 50 different levels in all. This is fun, and challenging, but after the six (nearly 30 years old) games, assortment of challenges, music and concept art there really isn’t much more. 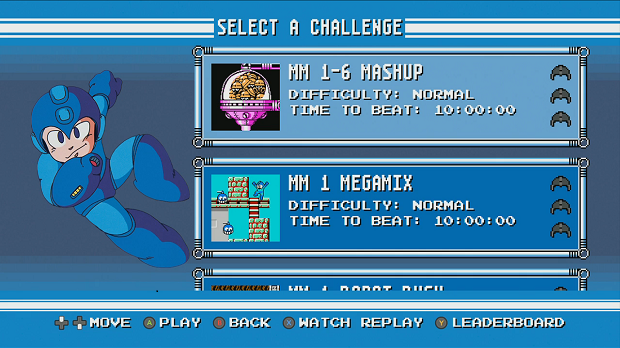 "For those new, or who’ve never, really gotten in to the Mega Man franchise, Mega Man Legacy Collection is a fun, colorful, light hearted platformer, with a good amount of difficulty and definitely worth the asking price."

Where Rare Replay really shined over Rare’s 30 year life span, introducing several different categories, with remixes, challenge modes, documentaries, and a rewind button (thank you, Rare!!), Mega Man falls completely short. Though this is not considered an anniversary edition, it is a bit unfair to fully compare these six-games-in-one to Rare Replay. But it’s hard to ignore, as Rare Replay really allowed us to see what was possible and incredibly affordable all in one bundle.

For the asking price of $14.99, however, Mega Man Legacy is a must buy for six incredibly challenging, but ultimately, fun games. And playing this on the Xbox One allowed me to generate great dashboard backgrounds from the forementioned concept and box art gallery by snapping a picture with the Xbox One screen capture.

For those new, or who’ve never, really gotten in to the Mega Man franchise, Mega Man Legacy Collection is a fun, colorful, light hearted platformer, with a good amount of difficulty and definitely worth the asking price. Even though it doesn’t express how proud Capcom are of themselves as much as Rare did, what is given is better than nothing. I only wish Capcom would have added Mega Man 7 through 10, effectively making this Legacy a true Legend.

A little too light weight on extras after the massive, behemoth we call "Rare Replay." And why not Mega Man 7 - 10?

Final Verdict:
GOOD
Still holding up after nearly 30 years, and still, every bit as challenging, Mega Man Legacy Collection is a great buy for the asking price. Even if it is a bit insecure with extra features.
A copy of this game was provided by Developer/Publisher/Distributor/PR Agency for review purposes. Click here to know more about our Reviews Policy.