Posted By Jordan Garland | On 11th, Jul. 2012 Under News | Follow This Author @MostUnfurrowed

Following on from today’s announcement that Metal Gear Solid 4: Guns of the Patriots is finally getting patched PlayStation 3 trophy support, Metal Gear art director Yoji Shinkawa has hinted at another Metal Gear release in 2012. 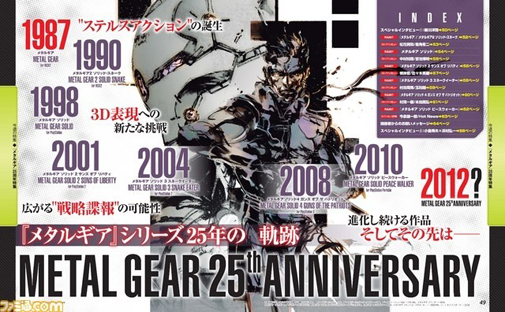 As you can see, the drawing not only features Solid Snake and Cyborg Ninja, according to Shinkawa the two characters who most accurately represent the series, but also charts the history of the Metal Gear series since its inception in 1987. The timeline inevitably ends in the present day, curiously framed with a question mark, suggesting Konami may have something else planned for 2012.

Metal Gear Rising: Revengeance can probably be ruled out, given its 2013 release and as we all know, games are almost never pushed forward. So what could it be?

On 30th August, Konami are holding their Metal Gear 25th anniversary in Toyko, so perhaps that’ll be a date for our diaries.