Metal Gear Solid 5 The Phantom Pain Getting New Patch Next Week, Events Will Have Fantastic Awards

And a number of Metal Gear Online 3 and FOB updates revealed.

While the release of Metal Gear Solid 5: The Phantom Pain has been met with almost universal approval, there have been a few problems noticed every now and then. Some of the issues have to do with content that was never release and others are run of the mill bugs. When it comes to the bugs, Konami has said it will be releasing a new patch next week and one can only hope that will fix those problems.

Konami has been sending different messages into the game about changes coming or that have arrived. Late this week the message told of some events that will be included in the game. These events, which also carry Infiltration and Support Promotion events. In addition to those announcements, the message also suggests more “thrilling FOB online gameplay” Since this new patch and apparent special events are said to be launching on October 6, it’s possible they will all be tied together.

According to the company, the event will have “fantastic rewards” as long as the event is completed and players have rival FOBs 5 times or if you have 10 or more supporters. The event’s rewards are going to be handed out on October 13. In addition check out the breakdown of the rewards people can get:

Players must reach a total of 10 or more supporters. These are the rewards if you are able to comply:

We’ll have to wait and see everything that comes with this patch when it launches on October 6, 2015. 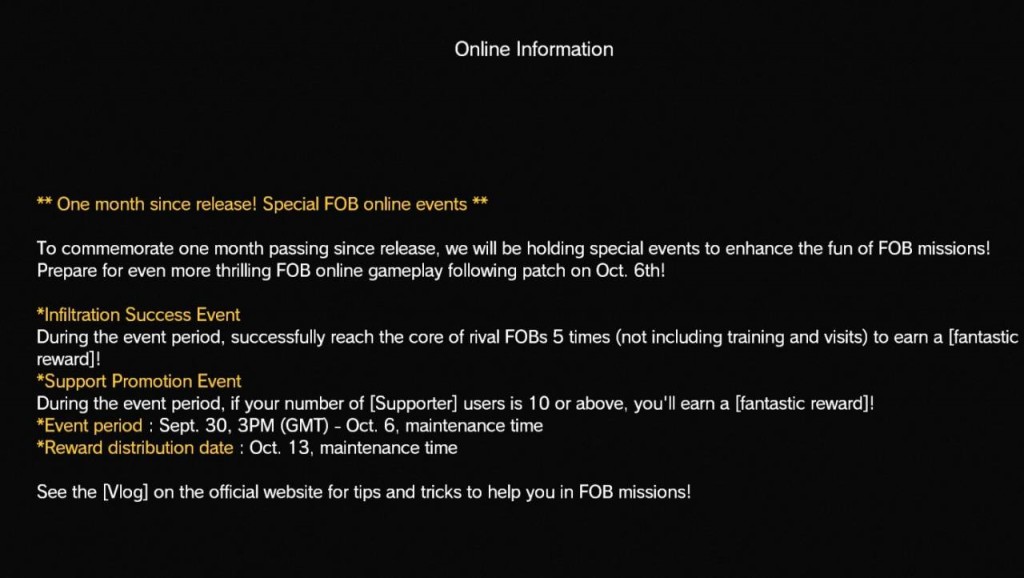 For more on the game check out 18 amazing things you can only do In Metal Gear Solid 5: The Phantom Pain.