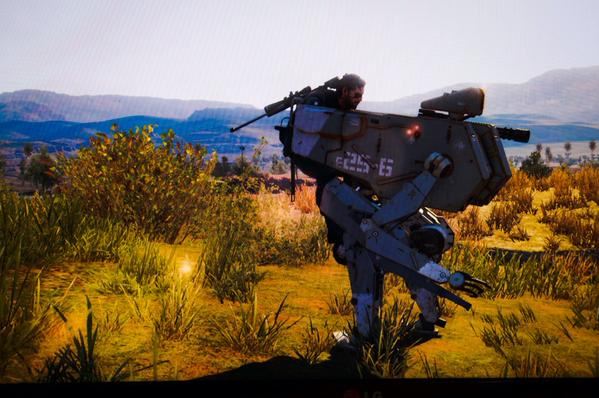 The mind of Hideo Kojima, that’s really just a maelstrom of controlled insanity, has taken to Twitter once again to show off something new and interesting for fans of the series. With everyone looking forward to Metal Gear Solid V: The Phantom Pain, Kojima has been drip teasing gamers on a nearly daily basis. This time around he has shown a picture of Snake piloting what can only really be called a Mini-Metal Gear.

Snake doesn’t actually sit in the Mech however, a closer look shows him controlling the suit from behind as though riding it. It’s a little tricky to make out the details in the picture provided but it would appear as though the machines left armour has been replaced with a shoulder mounted rotary weapon whereas the right has a three fingered hand with something slung along the underside, perhaps a weapon of some sort.

Speaking about the game itself, Kojima tells us about his recent experiences with it. He mentions Quiet suffering an injury that excludes her from operation activity and even mentions the loveable DD. He said, “I’ve been putting the game together while using DD as a buddy all the time. From this week, I have changed to Quiet. However, Quiet has been injured during a mission and transported to the medical facility. So, with the pilot, only two people are sitting in the helicopter. The seat is empty. I feel somewhat lonely.”

Ye, we too are feeling lonely without that release date.