Metal Gear Solid 5 The Phantom Pain To Have Zombies?

Anyone that has ever encountered a game programmer, most likely knows that they practically speak in a different language (code pun intended). So when a Redditor discovers a piece of code (see below) from the PC version of Ground Zeroes that reads, “property name=”isZombie”, some people look at it with utter confusion whilst others look at it and think, “Zombies in Metal Gear!”

Well, right now either could be true. Hideo Kojima, being the wonderfully insane man that he is, may well have thrown some Zombies into the mix for Metal Gear Solid V: The Phantom Pain. But personally, I doubt it. Kojima tends to focus on the fantastic and the impossible, things full of character, for his games whereas Zombies are a bit too soulless, for lack of a better word.

It’s also worth pointing out that “isZombie” could be a status flag for characters in the game. They mill around without point or purpose until a scripted event tells them to start doing something. Consider all the times you’ve seen a distant NPC just standing stock still until you get a bit closer. Typical Zombie movement right there.

Of course, I could be wrong and we may well have brain munchers in MGSV. It’s impossible to tell with Kojima. 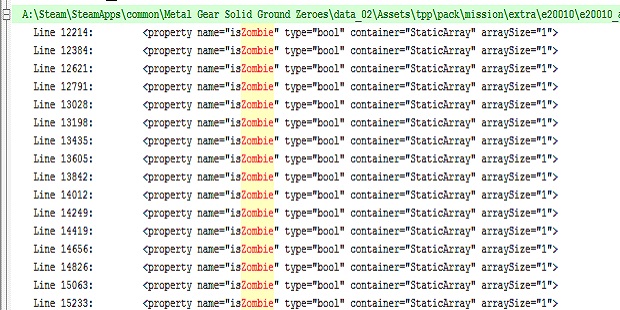