Metal Gear Solid 3 is one of the greatest games ever created. The seminal game in Kojima’s storytelling masterpiece series, Snake Eater took the world by storm when it hit the Playstation 2 late last decade. The game, which ditched the divisive direction that the series had taken with Sons of Liberty, went back to its roots, and to the roots of its chronology, as this prequel story chronicled the events in the story right in the height of the Cold War, looking at the origins of many of the popular series characters and tropes. Gameplay wise, the game was everything that Metal Gear fans had been hoping for after the incredible debut of the series on the Playstation, and everything that they thought they had been deprived of with Metal Gear Solid 2. All in all, then, Metal Gear Solid 3 is one heck of a game, and it is very hard to mess up when the core package is one of the milestone releases of the industry.

Although, in the 3DS remake’s case, it’s not from a lack of trying.

The game has the trademark Metal Gear Solid focus on storytelling, and it does so in style. Kojima’s style is anything but underrated, so expect a lot of dramatic poses, close ups, dialog exchanges, explosions, and more, sometimes all within the same thirty second frame. A lot of what’s going on may seem to be too fast, or too contrived, too convoluted, or sometimes flat out baffling (in one memorable scene, there is a massive nuclear explosion on site, and just a bit later, the characters are seen right back at that site, ignoring the explosion completely, neglecting to mention the nuclear fallout, or the damaging effects that exposure to nuclear radiation- that they are currently subjecting themselves to- could have), but for Metal Gear Solid fans, this is all par on the course, and expected. In fact, the game pretty much follows the series template, pretty much because it is the game that epitomizes the series template. For newcomers, a lot of what’s going on might go over their head, but as long as you go into the game with the mindset that this is essentially the video game equivalent of a Tom Clancy or Robert Ludlum novel, you should be fine. 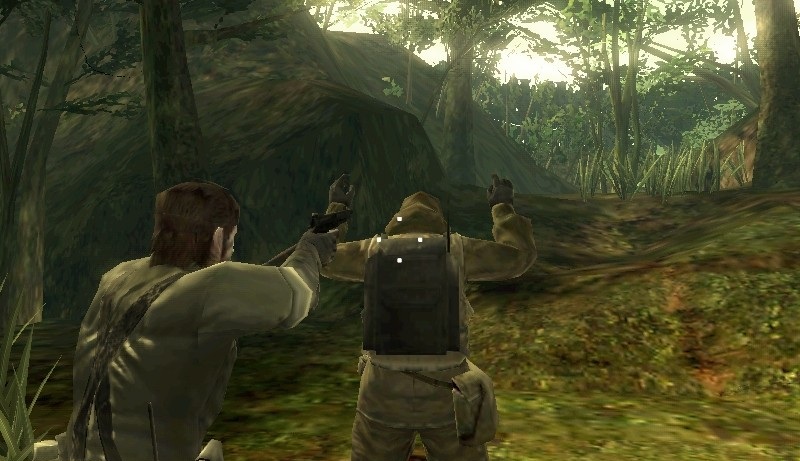 The game is a stealth game, and it features probably the deepest gameplay concepts in the series. Taking place in the open jungles of Soviet Russia, a stark departure from the sterile indoors that the previous games in the series had been set in, the game has Snake sneaking past enemy soldiers as he attempts to fulfill his assigned mission objectives. The game heavily encourages stealth, and so, you’re usually supposed to avoid having to engage your enemies in combat. This is mostly done by crouching really slowly, and by means of your camouflage and face paint, which you should keep changing to blend in with your surroundings and the changing weather. The camouflage rating can determine how easy you are for an enemy to detect you, so that even if he does see you at say a rating of 95%, you should be able to get away as long as you hold still.

Assuming that you fail to sneak, the enemy engages you in combat mode. Again, the game heavily features close range melee combat, which often gives you the chance to stun your enemy, question him, or just flat out kill him. In all cases, disabling your enemy almost always leads to a reduction of your presence’s awareness by the enemy forces (which rises every time an enemy sees you and reports you to his commanders).

Sounds confusing? There’s so much more. Snake’s ability to sneak and fight depends on two different parameters, his health and his stamina. His health is his HP, and it is determined by the injuries he has taken. As such, it will not be possible to recover or replenish your HP unless you have healed each of Snake’s injuries properly. Yes, this means you often have to find a spot to lay low, put a splinter to your fractured arm, apply disinfectant to your cuts, and then bandage all of that. Not healing your injuries leads to lower HP (meaning you’re easier for enemies to kill), and it means Snake is not as efficient at sneaking and fighting.

Another parameter that determines Snake’s ability to fight and sneak is his stamina. You see, you’re out in the jungle, and you’re given no food to feed yourself. Unlike all other games which kind of choose to gloss over the ever important question of just when their protagonist eats, and what he eats, Snake Eater makes a gameplay mechanic out of it. Not eating for too long will cause Snake’s stamina to drop, leading to reduced awareness, movement, and reflexes. You are encouraged to hunt down the various animals in the jungle- mostly reptile- and make meals out of them to prevent this from happening. Yes, Snake Eater really does justice to depicting a stealth mission in the heart of the Cold War. 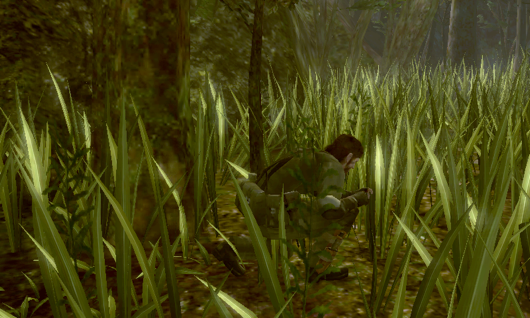 Gameplay is only one side of the coin. Snake Eater remains as compelling as it is because of its excellent story, and the game knows it, as it proceeds to tell it in style at every given opportunity. The cutscenes are meticulously directed and well acted, and all of them are in real time. Quite a lot of them incorporate real historic footage, and it makes it all look that much more authentic. Apart from the cutscenes- which are numerous, frequent, and often exceedingly long- there are the interactions Snake has with the various colorful characters that comprises the game’s cast via his transceiver. These conversations can go on for minutes and minutes, and while they are often integral to the plot, and sometimes witty and self aware, they are often completely irrelevant. Consider the fact that every time you save the game, you are subjected to a long review about some movie or the other, followed by the relative merits and demerits of movies, for instance. It’s a fun way of telling the story, but it often completely kills the pace, and I imagine many a gamer will be skipping all this dialog completely, only to be confused later on in the story as some important detail that the conversation they skipped becomes integral.

Actually, speaking of saving, I’m brought to my first criticism of this rather shoddy port. Snake Eater is, at its heart, a game made for the big screen, meant for the consoles. That’s in its DNA. In bringing the game to a handheld, Kojima Productions have made no concessions and no compromises to the rather different pick up and play style of gameplay on handhelds. This can be problematic, as you’ll often find you can’t save the game when you need to, and just put the system to sleep mid cutscene, or something else equally as important, only to be slightly lost as the game picks up frome xactly where you left off without any warning next time you boot your system up. A snappier save system, or at the very least a Quicksave state system, would have been much appreciated. 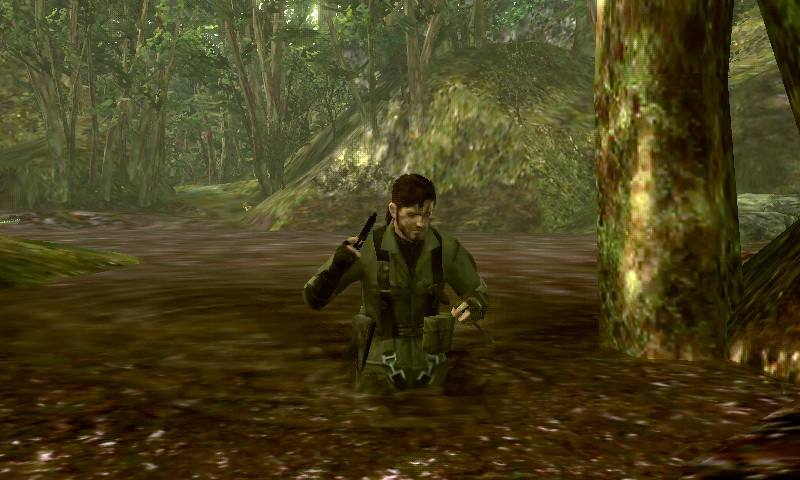 Another thing that this game messed up entirely is its graphics, and this is shocking for more reasons than one. Consider that Kojima’s games have always prided themselves on their ability to deliver graphically stunning experiences. Consider the fact that Snake Eater was one of the most graphically stunning games on the PS2. Consider the fact that the 3DS debuted with a five minute long Snake Eater 3D footage reel to demonstrate the system’s power.

However, in those two years since the game’s E3 debut and its eventual release, the game obviously saw cutbacks in its status as a high priority full blown remake to a quick port, with heavily downgraded visuals that look shockingly poor in places, with artifacts, screen tearing, frame rate drops (inexcusable), muddy textures, and jaggies. Ordinarily, I would have been more inclined to blame the system rather than the game for this, but games like Resident Evil: Revelations have already shown us that the 3DS has some considerable power under its hood if it is tapped properly, so Kojima does not get a free pass on this one.

There is also the fact that the control setup for this game is not ideal. The analog slider is used for movement, the D-pad substitutes for action buttons, and the A, B, X and Y buttons are used for aiming. The R button is used to engage enemies in combat, and the L button to enter shooting mode. Finally, the menus are accessed via the touch screen.

The problems with this setup should already be apparent, especially to those who have played this game before. Assigning actions to the D pad leads to extreme hand cramps. Assigning aiming to the action buttons leads to a symmetric impression of dual analog, but the fact that the aiming being done is ultimately digital can often lead to frustrating situations with the camera, particularly in close combat situations, or when trying to aim your gun. Aiming your gun itself comes off as a bit unintuitive, though it is perhaps the easiest to get used to out of all the eccentricities of the game’s control scheme.

Snake Eater 3D, then, suffers compromises in its transition to the 3DS. Konami tries to sweeten the deal, however, by including some nice extras not present in the original game. For instance, the game uses Augmented Reality technology by having you take photographs of objects in the real world, and then using those photographs to custom make your own camouflages in the game. It’s gimmicky at best, and it doesn’t quite work as advertised, but it’s a neat feature to experiment with. Then there’s the addition of the gyro balancing whenever you’re walking on a narrow surface, and this feels absolutely gimmicky and tacked on, frustrating more than enhancing the gameplay. Adding insult to injury is the fact that it cannot be turned off, so unlike the camera features of the game, it can’t even be ignored. You have to deal with it.

What about the 3D effect? Kojima has a flair for the cinematic. Surely he didn’t let the 3DS’s signature 3D effect go to waste, surely he made some good use of it?

Well… it doesn’t ever get in the way, I’ll give it that (unlike Resident Evil Revelations, for instance). But that’s all that there is to it. It’s always just… there. Nothing more, nothing less. It detracts nothing from the gameplay, but it doesn’t add anything to it either, nor to the storytelling.

Snake Eater 3D, then, is a quick port riddled with compromises and some rather baffling design decisions. And yet, because the core game is so incredible, the game manages to shine through, and it manages to be an experience worth recommending. Even in this heavily compromised form, Snake Eater 3D is a game that can almost unhesitatingly be recommended to anyone. Just keep in mind going into it that, more than ever while playing a Metal Gear Solid game, you’ll be dealing with a lot of quirks and eccentricities. As long as you know that, you’ll be fine.

Even in this heavily compromised form, Snake Eater 3D is a game that can almost unhesitatingly be recommended to anyone. Just keep in mind going into it that, more than ever while playing a Metal Gear Solid game, you'll be dealing with a lot of quirks and eccentricities. As long as you know that, you'll be fine.

A copy of this game was provided by developer/publisher for review purposes. Click here to know more about our Reviews Policy.
Tagged With: kojima, konami, metal gear solid 3d, Nintendo 3DS