Metal: Hellsinger is a new rhythm-based first-person shooter that tries to basically make a game out of heavy metal album art. How well does it manage this feat?

Metal: Hellsinger is the latest in a line of indie shooters hoping to tap into the nostalgia for classic FPSes that many older gamers have. What sets it apart from its contemporaries, except for BPM: Bullets Per Minute, is that Metal: Hellsinger is also a rhythm game featuring a heavy metal soundtrack performed by artists from all over the metal scene.

Surprisingly enough, just Metal: Hellsinger’s insane concept wasn’t enough; it also has a decent enough story to keep the action moving. The protagonist is the titular Hellsinger out for revenge against the hordes of hell as she battles to get her voice back. She’s accompanied by a talking skull with a cowboy accent that provides the bulk of the narrative, including details about how Metal: Hellsinger’s hell works.

The story, despite its simplicity, actually helps carry Metal: Hellsinger’s forward momentum quite well; it never really gets in the way, and it’s not going to stop the game to show you a cutscene. Instead, the story is largely told in cutscenes before and after every level, helping set the stage for what you can expect in the newest depth of Hell you’ve descended to.

Aside from that, there isn’t really much to talk about when it comes to the story. There isn’t going to be any major twist that completely changes up how you think about the game, and let’s face it, the story’s basically an excuse to listen to some heavy metal while blasting some demons anyway.

"The story, despite its simplicity, actually helps carry Metal: Hellsinger’s forward momentum quite well; it never really gets in the way, and it’s not going to stop the game to show you a cutscene. Instead, the story is largely told in cutscenes before and after every level, helping set the stage for what you can expect in the newest depth of Hell you’ve descended to."

When it comes to the basics of being a good fast-paced shooter, Metal: Hellsinger has the right ingredients. It feels good to move around and kill enemies, and the variety of weapons and perks available to the player adds a lot of nuances in the actual gameplay. Having to synchronise all your shooting to the beats of a fast-paced metal song, however, is what really elevates Metal: Hellsinger from being just another boomer shooter.

There are a few weapons available, from the basic skull and sword you start out with, to the more standard fare like dual revolvers, a shotgun, and even a crossbow that shoots exploding bolts. All weapons fit quite well with the general aesthetics of the game, and they play just differently enough to make experimentation worthwhile.

The skull you get early on is also one of the more unique weapons in the game. While it’s little more than a weak pistol-equivalent when compared to any other weapon in the game, the fact that you can shoot it without hitting enemies and still level up your combos is what makes it useful. You’d be surprised how easy it is to get into the rhythm of switching to the skull and blindly firing while you look for more demons to kill, all just to keep your 16x multiplayer going.

Each weapon also has a unique super ability that can be used once you’ve filled up the super bar by just playing the game. The shotgun’s super, for example, fires a massive blast that decimates just about anything you’re aiming at, while the dual revolvers summon a clone that fires at enemies alongside you, essentially doubling your firepower.

Aside from all of that, Metal: Hellsinger keeps its mechanics to a minimum, and that’s a good thing. Not having to worry about superfluous extra mechanics while trying to stay on beat feels great, and I’m not too sure if anything extra would’ve really added to the core gameplay. Metal: Hellsinger also promotes quite a bit of replayability, not only with extra difficulty modes, but also with the addition of modifiers for each level. The modifiers all have distinct effects that make playing with them enabled at least once worth it.

On a fundamental level, however, Metal: Hellsinger isn’t really the kind of game you’re going to play through once and then never touch again. It features a scoring system that, while not quite as in-depth as something like Ultrakill, does a great job of encouraging players to get better at the game. It tracks a few interesting things aside from just kills; staying on beat is highly rewarded, as is taking as little damage as possible, and most importantly, the time you spend with a 16x multiplayer—something only really possible if you play to the beats of the music. 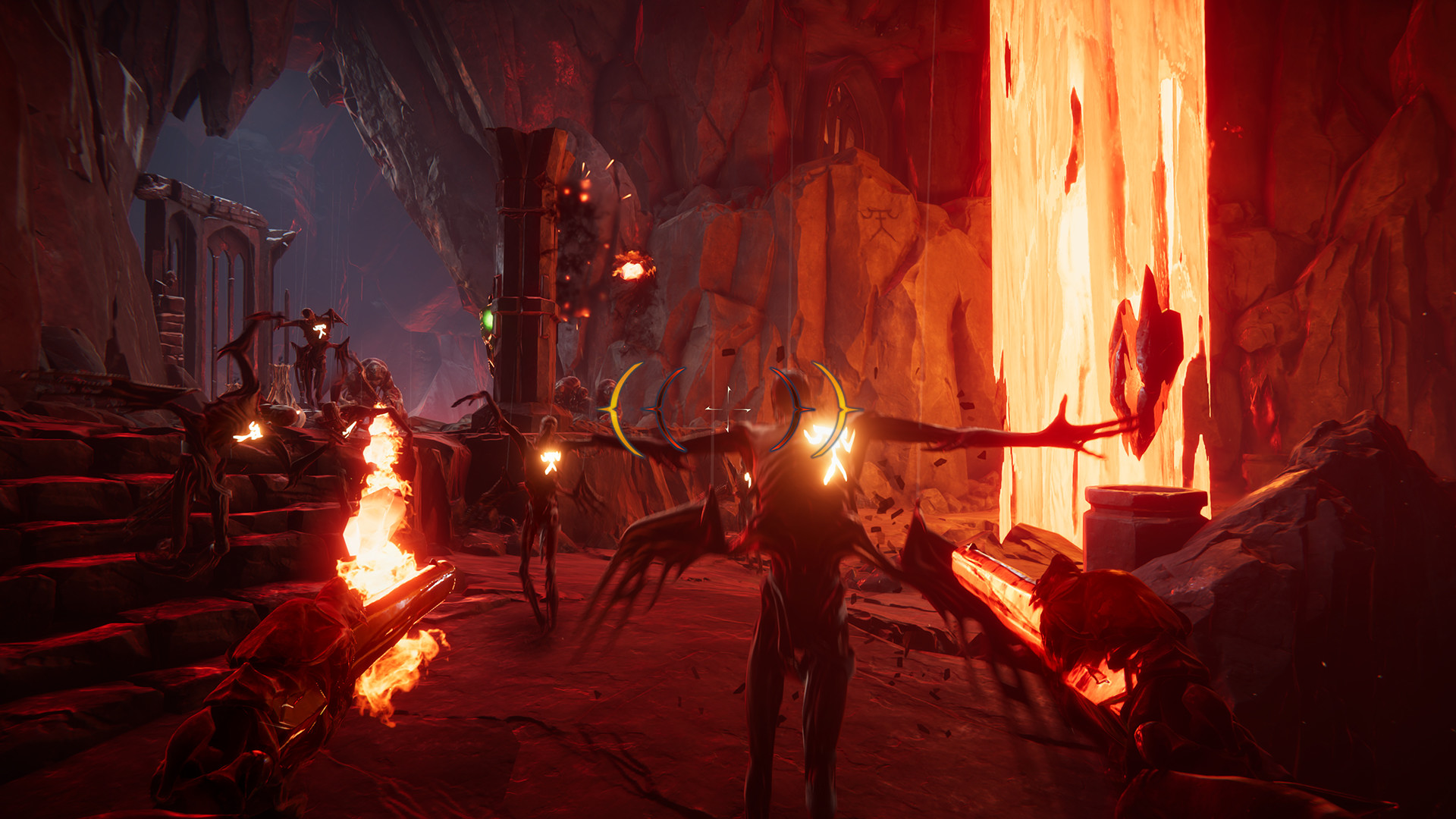 "Metal: Hellsinger isn’t really the kind of game you’re going to play through once and then never touch again. It features a scoring system that, while not quite as in-depth as something like Ultrakill, does a great job of encouraging players to get better at the game."

Let’s talk about the second most important thing about Metal: Hellsinger—the music. Featuring artists from a variety of popular metal bands, Metal: Hellsinger‘s music definitely doesn’t feel like an afterthought. Which is a good thing considering the quality of a rhythm game’s music has a lot to do with how enjoyable it can get. How the music works in the game is quite clever. When you start a level, you’re only really going to get some drum beats and maybe a bassline. Start killing enemies and building your multiplayer up, however, and you’ll get extra layers added on, be it a sick guitar riff, or more complicated drum beats. Hit the highest multiplier levels you can, and the vocals kick in, driving the game into overdrive.

These crescendos when the vocals are at their most epic are the moments that make Metal: Hellsinger feel great. There’s just something special and indescribable about the moment when the game is belting out melodic vocals with some sick drums and guitars playing as you mow down hordes of demons, and even take on a boss. And yes, these layers also work the same way if your multiplier starts going down. The worse you play, the more layers of the music that get stripped away until you’re left with nothing but some basic drums and a bass line.

Graphically, Metal: Hellsinger looks great. While keeping things looking sharp, nothing is too detailed so as to just make important targets, like enemies, blend into the environment. These kinds of minor things end up being lifesavers in fast-paced shooters; the fewer the distractions, the more fun the game’s going to be.

Sure, it’s not going to become the new standard by which to benchmark the newest graphics card, but more important is the fact that enemies are clearly visible, more “game-y” mechanics like healing crystals are difficult to miss, and levels make it very clear about where you can and can’t go. When it comes to fast-paced shooting, these aspects are way more important than shiny graphics. 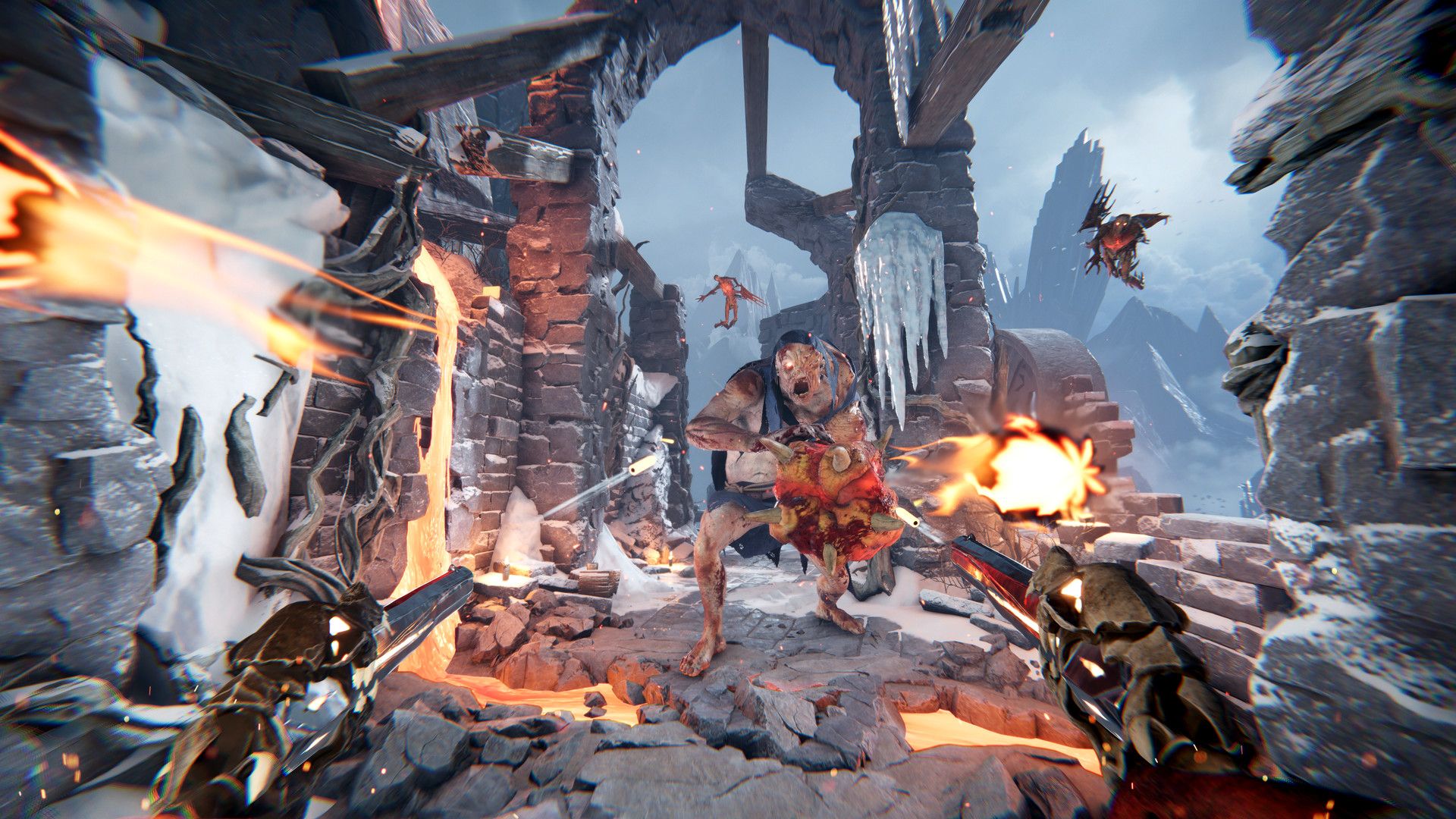 "Metal: Hellsinger is one of those rare games that I’d recommend to just about anybody… as long as they like metal."

Aesthetically, however, Metal: Hellsinger is a huge success. Essentially modelled after every metal album art ever created, the game’s visual style focuses on exaggerating the fact that you’re in hell. There are skulls and fires just about everywhere, and the demons you fight have been designed with just the right level of attention to detail that makes them identifiable at a glance just from their silhouettes, even from a distance.

Metal: Hellsinger is one of those rare games that I’d recommend to just about anybody… as long as they like metal. That’s going to be the only real downside; if you’re not a fan of metal music, you’re not going to find much to enjoy in a game literally titled Metal: Hellsinger. It plays fantastically, looks great while not getting things too muddled in detail, and most importantly, its music is phenomenal. Seriously, I can’t wait for this game’s soundtrack to become available; it’s the kind of music that’ll live in one of my playlists forever.

May not be as good for those that don’t like metal music.

Final Verdict:
AMAZING
Metal: Hellsinger is an easy game to recommend—the music’s great, it feels really good to play, and it looks great. The only real caveat to all of this is that, if you’re not a fan of metal music, Metal: Hellsinger might not have much for you. While its combat is great, the music is what truly elevates it from being just another boomer shooter.
A copy of this game was provided by Developer/Publisher/Distributor/PR Agency for review purposes. Click here to know more about our Reviews Policy.