If there is anything that would make Sony and Nintendo fanboys eagerly await the upcoming Halo 4, and anything that might make Microsoft fans dread it, it’s probably this piece of news that has recently emerged.

Apparently, the industry’s best and most talented developers are all working on Microsoft’s upcoming shooter, the fourth numbered game in their long running premier series. The talent that 343 Industries has recruited for Halo 4’s development seems to be the very cream of the crop as is evidenced by the screencaps posted below:

The first notable developer is Chris Haluke, who worked with Guerilla Games on Killzone 3, as lead designer. Other notable projects he worked on include Assassin’s Creed and Splinter Cell. 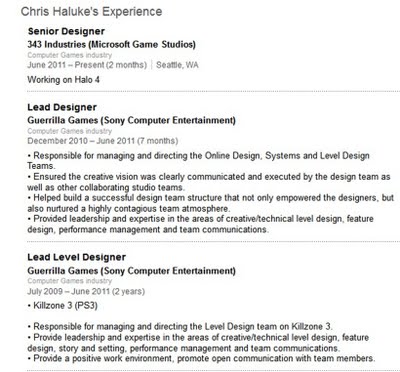 Next, we have Kynan Pearson, who worked with Retro Studios for seven years, and has the superb Metroid Prime 2 and Metroid Prime 3 to his credit. In addition, he also played a major role in last year’s seminal platformer Donkey Kong Country Returns. 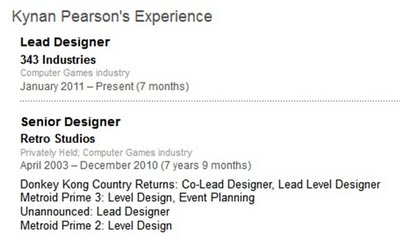 The final major designer we have working on Halo 4 is Jason Behr, a renowned photographer who was responsible for the photorealistic and claustrophobic level design of Metroid Prime. He has worked with several impressive developers over the years, and has a lot to his credit. 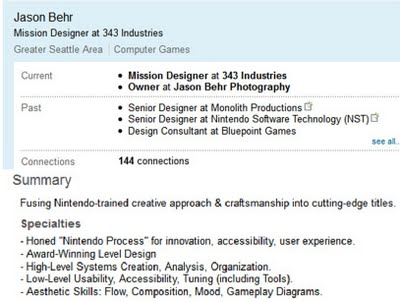 This is all clearly indication that Microsoft, a platform holder with a traditionally weak first party, understands the value of the Halo brand to its Xbox consoles. The Halo brand single handedly sold the Xbox, and even today, continues to be a driving force behind the platform’s continuing success. Fans who were scared after Bungie handed the keys to the absolutely untested 343 Industries should heave a sigh of relief- evidently, 343 Industries is composed of some of the best talent in the industry.