Let’s see- MindJack can really only be summed up in one word and that is weird.  Now that is not necessarily a bad thing especially being that this is a third person shooter published by Square Enix.  The game is developed by Feel Plus and is not like any other shooter your ever going to encounter.  The main intrigue of the game is that anyone’s mind can be hacked into and upon doing so gives you a somewhat Matrix style satisfactory cinematic.  Once you die you must choose another mind to hack into whether it is your rogue partner, a random innocent civilian or an enemy that you have chosen as a ‘Mind Slave’ previously.  The idea is actually really cool as you can literally have an army of soldiers at your side shooting at their fellow ones, but ‘Mind Slaves’ don’t last long and fall to the ground dead at every checkpoint.  You can also willingly leave you mind and take control of another by pressing down on both sticks, but if you’re in control of the main character, you will leave him vulnerable for attack.  Once you and you partner, who happens to be a woman that does not have the ability to pick a damn rifle on her own (always leaving you with a pistol upon hacking her mind) are both dead, you lose.  So it is imperative that you keep at least you or your partner alive by healing them when they are down which uses up an energy bar that regenerates after time and happens to be the same energy bar used to turn an enemy into a ‘Mind Slave’.  After every checkpoint you are returned to your original body. 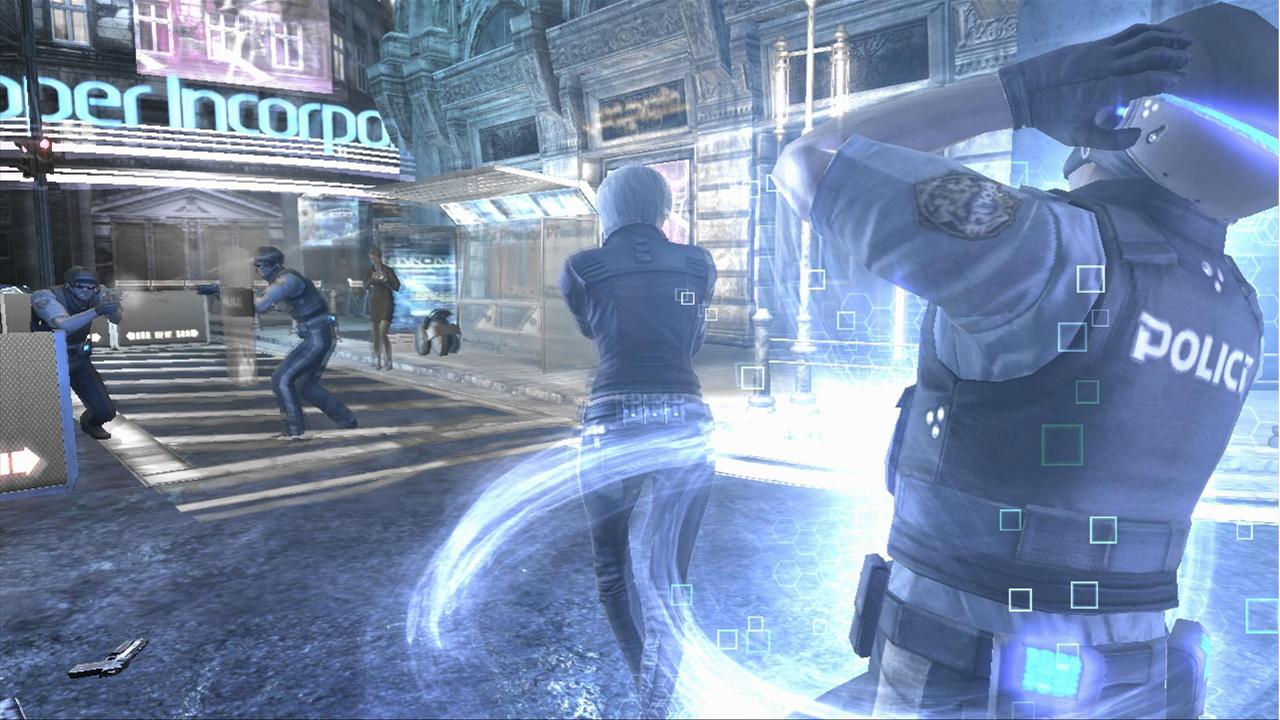 Now there is one single-player campaign that you can choose to leave open for people to join on either your side or the enemies side, or close it so no one can join.  Closed or open you can forget about the pause button, that is a thing of the passed apparently which striked me as being rather odd even during a closed single-player session.  Right from the menu it is as simple as that with two modes available ‘Host Portal’ or ‘Hack Portal’.  Host Portal which you control the main characters and you can have up to five other people join on your side as well as the enemy side.  Hack Portal is where you hack into another persons game and join either then or the enemy depending on how balanced the current player situation is, for example you will become the enemy if you enter a room where it is only the Host player playing.  You can even custom search for a game but with few options to choose from.  A full room of players makes it almost like a team death-match but in reality it is the enemy trying to prevent the good guys advance in the story which can be rather annoying if you have not beaten the game yet. 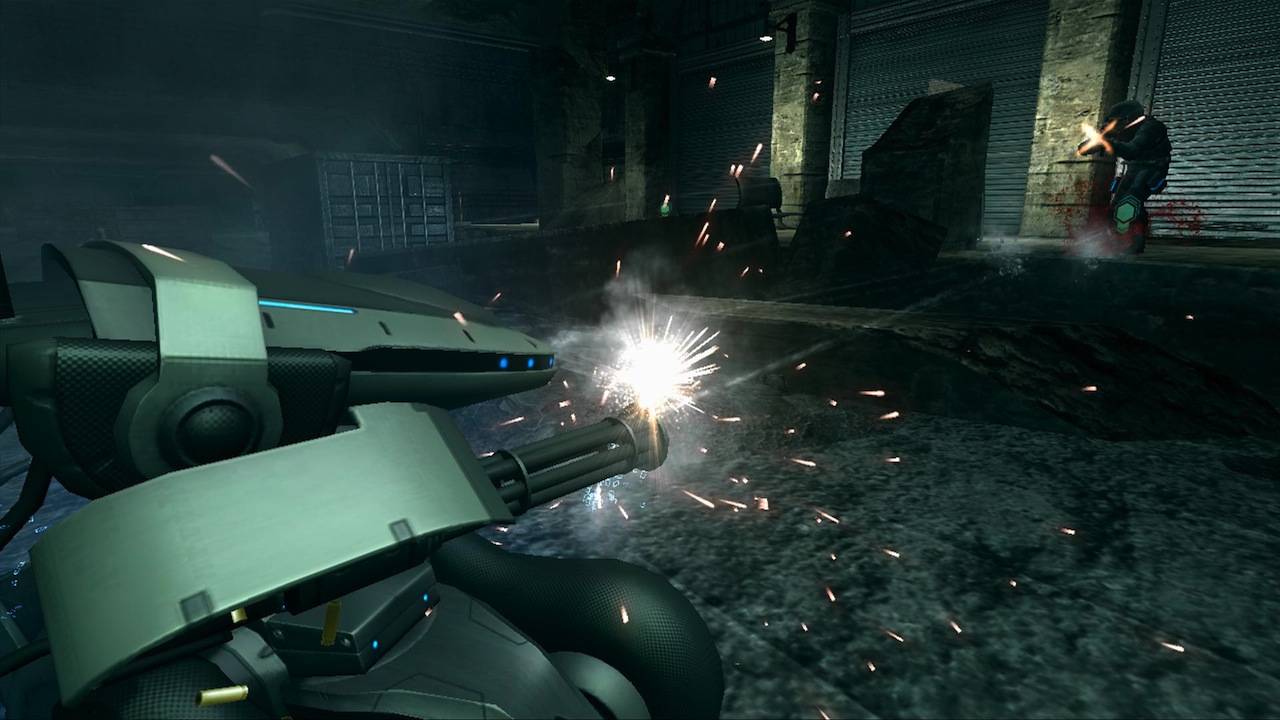 You can even MindJack machines.

With the ability to have co-op in the game you would think they would make it easier to invite a friend to just play alongside you as you play the story killing AI, but it’s not that simple.  Feel Plus feels that as long as your friends are in the game it is co-op I suppose, so your friend might or might not be fighting along side of you when they hack into your game.  You can however setup Private Slots, change the clothing of the main characters and of course turn the ‘Hacker Limit'(open or closed game) on and off, but annoyingly makes you leave the game session to do so.  Searching for a custom match when using the ‘Hack Portal’ lets you choose the general level of the persons game you’re hacking into as well as the ‘Area’ and ‘Mode’ (Story or Scene Selection).

You will level up in the game by doing thing like killing people and you gain more XP for killing enemies different ways, with close combat kills giving you the most experience.  You also gain XP from making an enemy your ‘Mind Slave’ as you will level from 1 to 50 if I am not mistaken.  As you level up you will gain new plug-ins to use, which are basically like perks.  There are two types of plug-ins which are ‘Rules’ and ‘Arts’, while there are only five Rules to unlock, their are twenty Arts you unlock as you progress through rank.  For example Rules can be ‘Glide Time’ making the difficulty level easier and ‘Arbitrary Time’ which shuffles the Blue and Red teams at the end of each battle.  You may choose Arts such as ‘Stone Body which increases physical strength by 10% or ‘Effortless Profit’ which gives you XP automatically while you are in ‘Wander Mode’ (choosing a mind to hack) during game.  One Rule can be chosen while two Arts may be equipped and you don’t forget about this as it can make a big difference in gameplay even if you are playing by yourself. 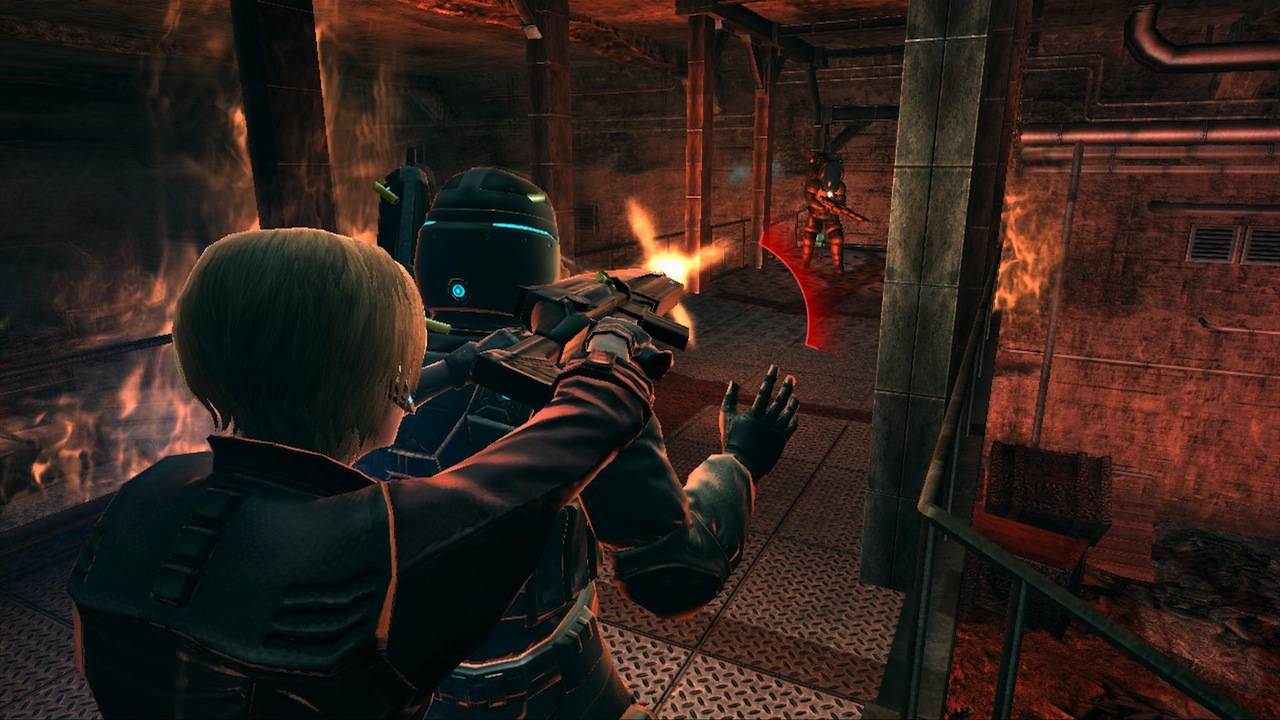 The gameplay is actually one good thing about the game that I did not expect, as there is a cover system which you can blind-fire from and tapping the sprint button (A/X) lets you dodge away quickly as well as letting you grab cover in unique ways.  The game quite frankly reminds me of a combination of Gears of War and Resident Evil, just no zombies and you can walk and aim simultaneously.  You can grab a damaged enemy and use them as a meat shield until they either die or you kick them away and shoot which was weird that an execution button while holding an enemy.  Oddly each chapter starts you off with a pistol and a pistol only, not that it’s hard to acquire another weapon, which there is not much to choose from.  The biggest disappointment in this game were the boss battles as some of them left me feeling fucking retarded afterwords when in actuality you never really fight the bosses as they are there just for show kind of.  Don’t even bother shooting them or attacking them as all that needs to be done is fight off the re-spawning soldiers you have been fighting throughout the whole game and then the boss usually just spontaneously combusts for some unknown reason.

MindJack is not a bad game it just has a few flaws and is far from what you would expect from a third-person shooter these days.  The gameplay mechanics are all there if you don’t mind taking a few bullets while clearly behind cover.  It is kind of fun but the main problem is the story of the game, if there is one there, I would appreciate it if someone could e-mail me it cause I had no idea what was going on.  The thing is I have played games where the story is not the main center point of the game and they were great games but MindJack lacks a little more than story.  Other than that the actual concept of the game is very cool in my opinion and I even got a chance to interview the developer of the game, with his handy Japanese translator as I was really looking forward to playing this game.  All the co-op is online though so don’t bring your buddies over expecting for some split-screen action which is not a horrible thing.  It is a fun game but I feel it just fell short of a few too many things and should have been in collaboration with a person/team more experienced with third-person shooters.  You might have a blast playing this game with five other friends going up against each other, while mind hacking and on the other hand you might not.  With the games intriguing sci-fi concept I believe it could be made into a much better sequel provided things were changed.  Bottom line though is that MindJack is not worth $59.99 in this competitive market.

Solid gameplay mechanics. Unique and very intriguing idea. Up to 6 players can play online in the story.

Not much of a story or plot there. Boss battles are pointless. No pause button. The game does not change that much from beginning to end.

Final Verdict:
FAIR
MindJack has an amazing idea, where you can hack someone's mind, taking control of them in this third-person shooter. While the game has its good points like leveling to gain perks and giving you an interesting concept of mixing the main story with online, the game falls short where it needs to be at its strongest in the industry today.
A copy of this game was provided by Developer/Publisher/Distributor/PR Agency for review purposes. Click here to know more about our Reviews Policy.