Cuddle up with your favorite author and get ready to wait as ModNation Racers has some of the longest loading screen I have ever sat through. The actual load time isn’t all that bad but you will see it a lot. If you don’t know what ModNation Racers is; it is a Mario Kart style racer cross bred with LittleBigPlanet. Nearly everything in the MNR world is customizable and the overall game play is satisfying. The online community is outstandingly friendly and the developers obviously put in the time and money for a great game.

ModNation Racers is super addicting, it could be compared to my insatiable thirst for freeze-pops. The replay factor is through the roof with the ability to completely customize race tracks and hopefully some DLC add-on’s for more in the future. It has all of the amazing and annoying factors that kart style games have set par to in the past decade or so. You can power slide and use a turbo, as well as hit the boxes scattered across the map to gain weapons. 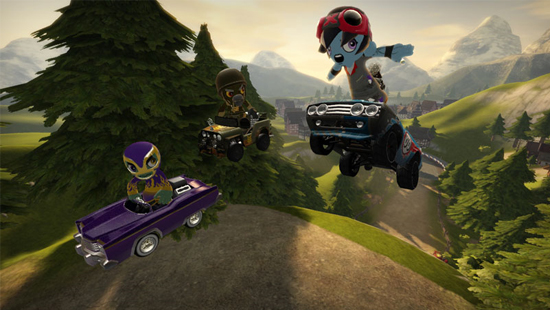 Soaring through the air!

I almost have to feel sorry for all other competitors at this point. ModNation has just about set the new standard for kart games. Mario Kart is good, but the whole story line feature in ModNation pretty much kills off any competitor with only the run of the mill single player tournament system. The story line has a Tony Hawks Underground feel to it, as you have to go from rags to riches.

The story is pretty basic, but is interesting enough to add a little something extra to the game. I cant lie it was enough to keep me interested and playing, although it was quite simplistic, there is a bit of comic relief. You’re a young race fan and you are dreaming of joining the biggest kart racing event. On your journey to join the other famous racers you will run into all kinds of interesting events. Everything from sabotage to deception, you will have to race through the hard times to be a success. 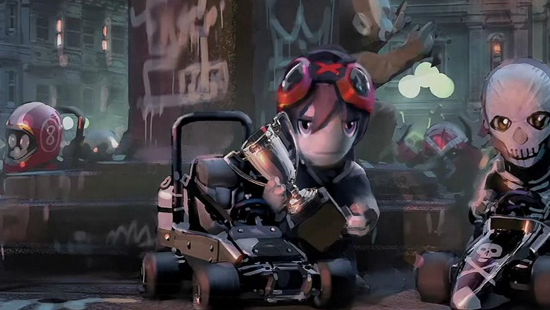 Accompanying you on your every action is play by play commentary from two characters that are full of life. If you are familiar with the hit American and Japanese television show MXC than you will understand completely when I say that the characters have that vibe to them. One is very mean and kind of a sociopath, while the other is just a little self conscience yet refined.

Some of the things that I would really like to change about this game are not really changes but things I would like to see added on in the future. I would like to have in the story mode the ability to have companies come to me and I have to choose what sponsors I want, which unlocks stickers for my characters costume and vehicle.  I think it would add even more replay value to the story, because now I’m wonder what would have happened if I chose a different sponsor. 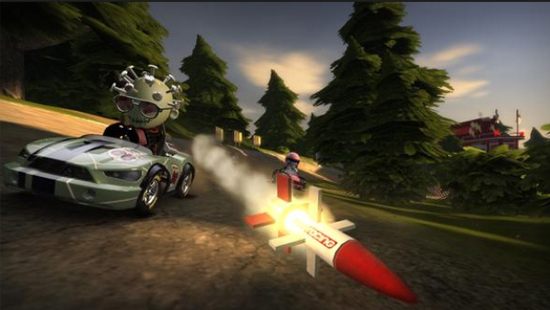 Customization is the name of the game, and it’s what everyone is going crazy for. There are some limits like character shapes and what not, but for the most part if you can think of it, there is a way to do it. I personally made Kratos as my first character and my first vehicle was a mock-up of Vin Diesels American muscle car in Fast and the Furious. I did add a little something extra to it, like some red spikes on the hood. I figured it could use a little something to get that bad boy factor in there.

As far as it goes for customizing your characters, there are a lot of features. You can change clothes add accessories, change your facial features, choose from multiple voices and put stickers on everything. If you’re playing just go nuts because you can make so many different characters and the sky is the limit.

Moving on to how MNR actually performs is going to be very good. The frame rate is actually quite solid even in a lot of high action scenarios. It’s surprisingly smooth and easy to pick up. The learning curve will be very gentle for those who are familiar with the genre. If your not familiar with kart games than you should be able to pick up the idea with a few hours of fun practice. Let me just say that driving a lightning bolt shooting race kart is like riding a bike. 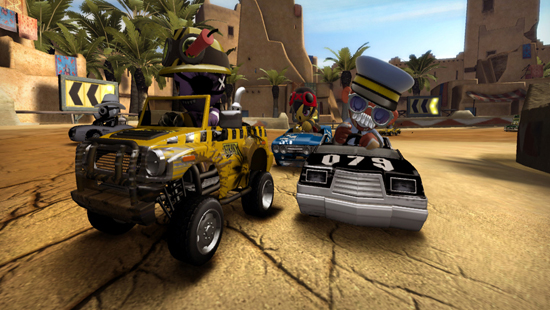 Just a look at some custom characters here

For being a crazy car shooter style game, ModNation is fairly casual and family friendly. There is hardly violence and it’s nothing worse than you would see in a Pixar movie. Over all it’s a fun racing game that is fun for all age groups and can be played fairly easily by anyone.

Graphically speaking ModNation is great. It’s not the best graphics I have ever seen but it definitely is not the worst. There is good use of glares and sheens to make realistic materials. The environments look great and the flow of the level’s are wonderful. There are a few different scenes to choose from including the typical desert and woodland scenes. Some of the levels can get just out of control with crazy huge jumps and all kinds of deadly obstacles from big smashers to flame throwers.

If you really enjoy the design and creation system of LittleBigPlanet than you will indefinitely enjoy building levels and tricking out all your creations. The characters are basically rubber-boys instead of sack-boys. It might be a while down the future but I think that when MNR2 comes out the improvements will be so insanely large, that it will grow to be something that nobody will beat. In fact I think that ModNation will be competing with itself for the number one kart game.

So over-all MNR is a great game and if you are truly a kart fan from back in the day, than not a whole lot has been changed. It’s worth a buy for sure, especially if you’re into online communities. ModNation may be one of the top titles for PS3 very soon.

There are a lot of really good things about ModNation. Online community is outstanding, and the single player is just as fun. The customization is just amazing, and the graphics are clean and beautiful.

There are some long loading screens but that is the only real problem I had with ModNation.

Final Verdict:
EDITOR’S CHOICE
ModNation Racers is an inevitably successful kart racer. If you like Mario Kart and own a PS3 then do yourself a favor and purchase MNR.
A copy of this game was provided by Developer/Publisher/Distributor/PR Agency for review purposes. Click here to know more about our Reviews Policy.