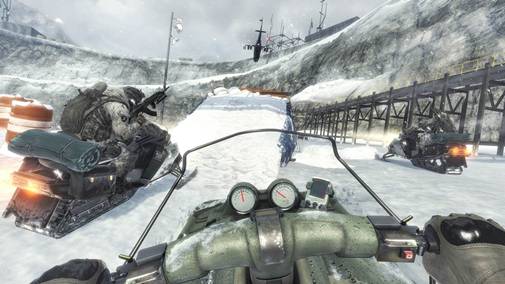 “Black Ice” and “Negotiator” are now available to all Call of Duty owners on Xbox LIVE. The DLC will also include “Black Box”.

The DLC pack will be released on other platforms at a later date.

“Call of Duty MW3 Content Collection #1 is the biggest DLC pack ever for Call of Duty,” said Eric Hirshberg, CEO of Activision Publishing.

“We’re serious about delivering the best value to our fans and just as we promised last year, it’s not just maps anymore. With six pieces of playable content, that’s more content and bigger variety than we’ve ever been able to include before in a Call of Duty DLC for the same price.”

· Black Ice: This Special Ops mission plunges combatants deep into a frozen diamond mine via a snowmobile in order to infiltrate a secret weapons plant and initiate the self-destruct sequence to take the facility offline for good.
· Negotiator: India is the backdrop for a Special Ops hostage extraction, where gamers must execute flawless breach-and-clears and negotiate a maze of surface streets to ensure the safety of rescued civilians.
· Liberation: Players take up positions in a militarised Central Park in the heart of NYC, a sprawling deathscape ripe for long-range sniper and LMG kills.
· Piazza: An idyllic seaside village, an Italian getaway gone rogue, where blind corners and a complex warren of branching pathways pose danger at every turn.
· Overwatch: A compact, sky-high battle arena set in a construction site atop a New York City office tower.
· Black Box: Players seek tactical advantage in multi-level hillside homes overlooking a downed Air Force One, as a luxe SoCal neighborhood turns into a warzone.