We go hands on with the Xbox One X version of the game.

After the highly successful debut of Shadow of Mordor, the developers at Monolith Productions are back with the highly anticipated sequel: Shadow of War, which is set in mythical world of the Lord of the Rings. With Mordor being a major hit for the studio, there was nearly no doubt that a sequel was on its way, and we finally got out hands on it. Shadow of War takes place after Shadow of Mordor, but in the J.R.R. Tolkien book series it occurs between the events of The Hobbit and The Lord of the Rings. What’s really juicy about these games published from Warner Bros. Interactive Entertainment, is the fact that many of the elements that occur are inspired by the films and less than the books; and being it’s own story, Shadow of War can stretch out its own limbs and create original content that doesn’t necessarily counteract anything from the books or movies. So much of the game is filled with original and new content aplenty.

First things first, you should be happy to know that you will continue the game as Talion from the previous story; and you’re still infused with the same mystical powers and control of the spirit of Celebrimbor. Talion is a man of many great talents. His ability to avidly climb walls, without even a ledge to clamp down on to is unparalleled. Move over Nathan Drake, we’ve got a new cliffhanger in town. That’s right, Talion has the ability to climb towers without any struggle at all, and it feels great. It’s a bit weird and doesn’t look real, but who wants to slowly climb a wall or tower when this game is based on momentum? And also, blame it on his magical powers. 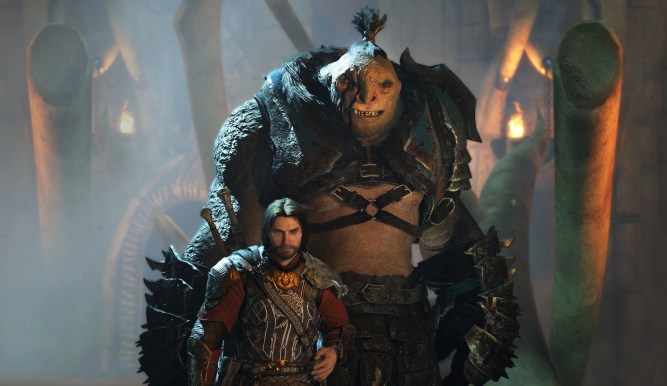 "With a ton of main story quests going on, Shadow of War is also filled with really fun side quests. These aren’t your standard fetch quests you’ll find in other major triple-A games either."

Talion’s ability to tactically infiltrate the minds of minions, and every sort of enemy, the Nemesis System from the previous game returns. The Nemesis System is more fleshed out than ever before and can be used on nearly every enemy in the game. After punching out an enemy, I was able to either shame the enemy, or have it join my ranks of an army I’m growing to take down enemy castles. Controlling enemies is obtainable in steps; and the first step is to beat the enemy into submission.

Just go down and swat it with your sword a few times and drain its health. Afterward, you can shame the enemy: this involves embarrassing the enemy and having it run off. But there’s also the ability to recruit enemies; again, almost all enemies are recruitable; even the massive ones that you can even ride and go smashing things up with. Same process applies: beat the enemy into submission and force it to join your ranks. The updated Nemesis System felt great and I was really proud of the number of enemies I was able to recruit and shame within a short amount of time.

One of the many jobs Talion takes on is laying assault on a series of castles and fortresses in the land. Castles involve a series of ways to go about infiltrating and killing the head chief. One way, is to locate the boss’s secret minions who are linked directly to him. With each location, you bring with you your own army of recruits; those that have joined willingly and those who you’ve recruited using the Nemesis System. So you’ll likely never be in a massive castle battle alone. When you find and defeat and/or recruit his personal body guards, the boss of the castle will come out and you can defeat him. Another way is to kill everyone, as well. This involves a major battle (most of which occurs no matter what) where your army battles the soldiers of the castle inside and outside of the walls. Or you can sneak in covertly and make minimal kills to find where he’s hiding.

"Shadow of War is a beautiful game set in a magnificent world, brought to life in a magical realm. And playing it on the Xbox One X was unreal."

With a ton of main story quests going on, Shadow of War is also filled with really fun side quests. These aren’t your standard fetch quests you’ll find in other major triple-A games either. These involve big story plots, fighting, rescuing, recruiting, exploring and more. I played a coupleof  side quests that dropped a lot of loot; one was a good early-game sword.

Shadow of War is a beautiful game set in a magnificent world, brought to life in a magical realm. And playing it on the Xbox One X was unreal. Unlike Shadow of Mordor, Shadow of War isn’t as drab or colorless like before. From watching orcs rambling on and working in their camps, to wild beasts running around looking for prey; Shadow of War is a living game that wants you to think. The hues of greens and browns are fresh and lively around the forests and prairies. The atmosphere is pungent of looming war, but also of strength and the will to survive.

After playing through Shadow of War’s preview version at E3 2017, it’s obvious that Monolith is treating it with great care and tremendous pride. There are a few odd choices, such as no fall damage, and the slow pace of climbing; but overall the game is looking amazing at this point and should only be better by the time it releases.