Everything you need to know about Monster Boy and the Cursed Kingdom.

Monster Boy and the Cursed Kingdom is a 2D side scrolling exploration-based platformer developed by French studio Game Atelier and published by FDG Entertainment. It is described by the makers as a spiritual successor to Sega’s classic Wonder Boy series of platformers.

Development on Monster Boy and the Cursed Kingdom started in 2014. When the game entered development, it was titled Flying Hamster II: Knight of the Golden Seed, as a sequel to Game Atelier’s Flying Hamster, which came out in 2010. Eventually, the game was picked up by FDG Entertainment, who made the decision with Game Atelier to change the nature of the project, instead turning it into what was described as a spiritual successor to Sega’s Wonder Boy series. Though the game is a sequel to the Wonder Boy games in all but name, the Wonder Boy trademark rests with Sega. As such, the game was titled Monster Boy and the Wizard of Booze. After receiving criticisms for the subtitle, it was eventually renamed as Monster Boy and the Cursed Kingdom.

Ryuichi Nishizawa, who was the creator of the Wonder Boy series, is also involved in the development of the game, while the game’s soundtrack has been composed by a collection of well-known Japanese artists, including Keiki Kobayashi, Takeshi Yanagawa, Michiru Yamane, Haruka Shimotsuki, Yuzo Koshiro, and Motoi Sakuraba. The game’s soundtrack also includes rearranged tracks from previous Wonder Boy games. Originally the game was supposed to use sprite based visuals, but as per the developers, the visual style was changed a few times during the development process, before they finally decided to use hand drawn art and animations. At one point, the developers had even planned on using 16 bit visuals for the game, as they wished the pay homage to retro style video games on the Sega Mega Drive from which they took inspiration.

Monster Boy and the Cursed Kingdom was originally scheduled for a launch on November 6, 2018, but this was delayed by about a month to December 4 due to issues with production of the game’s physical copies, for which FDG Entertainment have partnered with Sega. PS4 and Nintendo Switch will receive physical copies of the game, while these will be limited only to North American audiences. 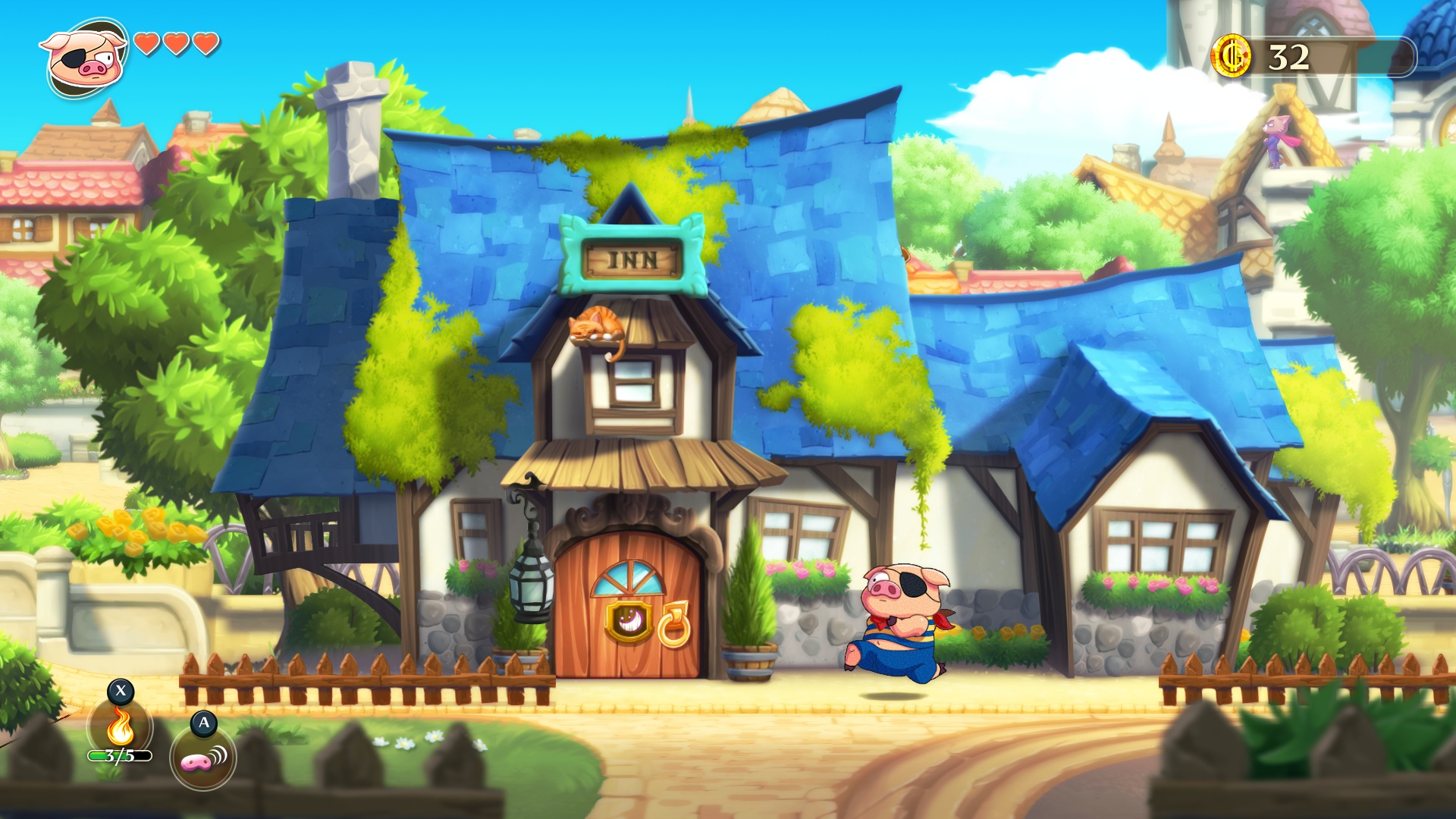 Monster Boy and the Cursed Kingdom sees players playing as a young boy named Jin, who must journey across the kingdom as he attempts to stop his Uncle Nabu from using his magical powers to destroy the kingdom. The developers have stated that they do not wish the emphasize the story too much, and even though the setup will be important to the game, their main focus while developing the title has been on gameplay and mechanics. 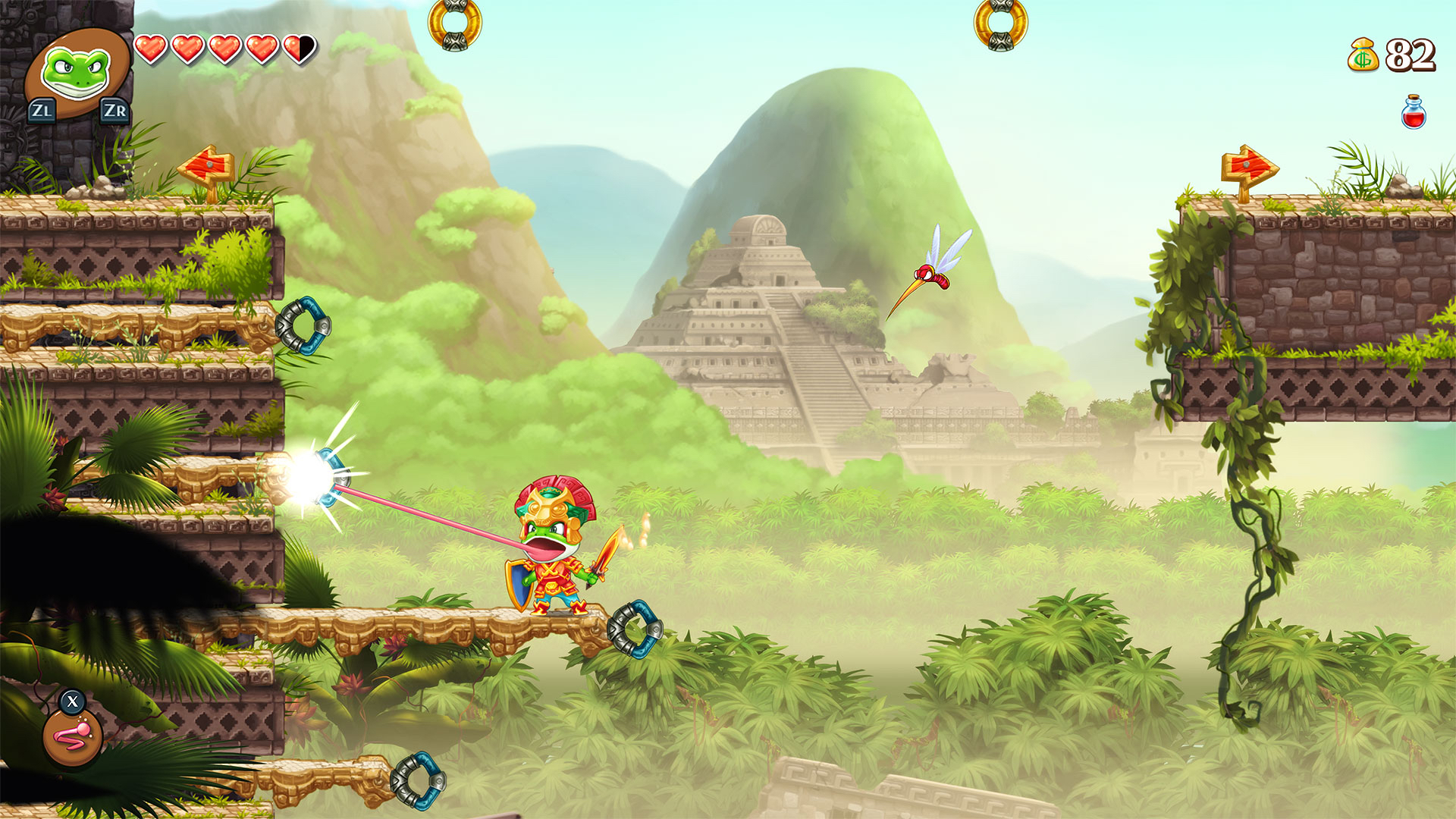 Monster Boy and the Cursed Kingdom is an open world side scrolling platformer. Rather than requiring precision platforming from players, it instead places a focus on exploration, to the extent that when players fall into gaps, they do not die like in regular platformers, but are instead respawned, with the only penalty being a slight loss to HP. While exploring, players can discover hidden rooms, gear, and equipment, and have to fight against enemies and solve puzzles in the environment to progress further.

Players can transform into six unique animal forms, with each having their individual advantages and disadvantages that apply to combat, platforming, and puzzle solving. For instance, while transformed into a pig, players cannot equip weapons or armour, but they can use magic spells, which can be done in only one other form (human form), while the pig can also sniff around the environment to find secrets. While playing as a frog, players can use their tongues to reach distant places to make previously inaccessible areas more accessible, while playing as a snake allows players to climb up slimy surfaces. Puzzle solving, combat, and traversal rely on and encourages players to experiment with different animal forms.

Transforming, and mixing and matching with various kinds of gear, equipment, and animal forms is also encouraged in gameplay, especially during exploration. According to the developers, Monster Boy and the Cursed Kingdom has over fifteen hours worth of content. Players can explore open environments and pick between branching paths. There are shortcuts and other means for quicker traversal, which the developers also made sure to emphasize in order to prevent the game’s backtracking sections from getting monotonous. The developers have also stated that they have made the game in such a manner that it can be accessible to a wide range of audiences, and will have varying difficulty styles depending on how players choose to play. While critical progress won’t be locked behind extreme challenge, those who want to achieve 100 per cent completion will find a more challenging experience.