Monster Energy Supercross - The Official Videogame 4 improves on Supercross 3 in most of the ways it should have, but it stops short of true greatness.

Supercross 3 was a solid effort at the Motocross genre but it left a little bit to be desired in a handful of areas, thankfully Monster Energy Supercross – The Official Videogame 4 smartly builds on what worked in Supercross 3 and takes some swings at improving the formula. Not all of those swings are homeruns but they are impactful enough, overall, to make this follow up to Milestone’s previous monster energy-fueled effort a worthy foray back into the ruts of the Supercross world.

First off, you’ll notice that Supercross 4 looks pretty familiar with lots of the previous modes returning, but on closer inspection, you’ll see that they’ve generally all been expanded upon in ways that really add to the experience. While the Career, track editor, and compound modes are still front and center we see deeper versions of these modes with more to do in them than the previous game. The career is revamped with over 100 riders, 11 stadiums, and 17 tracks. All of which you’ll be racing on throughout the main career, the events and championship modes.

"Monster Energy Supercross – The Official Videogame 4 smartly builds on what worked in Supercross 3 and takes some swings at improving the formula. Not all of those swings are homeruns but they are impactful enough, overall, to make this follow up to Milestone’s previous monster energy-fueled effort a worthy foray back into the ruts of the Supercross world."

The track editor has new, much more intuitive modules that are easier to use while also markedly more advanced than the last one, and the free-roam compound is a great way to mess around with friends, brush off your rusty skills, or just get your sea legs. As you get better, you earn ability points that can be spent in the career mode to help with cornering, quickness, overall constitution and a handful of other things. So, by the time you’ve put a bunch of hours into the game you’ll be racing your way with your style of racer which is a nice thing to have in a game that relies on individual skill as much as this game does.

Game modes and technicalities aside, the game looks pretty good on the PS4 pro, which is the version we’re reviewing here. It’s still not quite what I expect from a 2021 game, but all things considered I have no major bones to pick outside of some mediocre textures in the environment here and there. If you compare it to the previous game, there’s no other way to slice it than admitting it’s an improvement, but judging it on its own as a motocross game released in 2021 might be a tad underwhelming, so that just depends on your personal perspective I suppose, but you’re unlikely to feel too strongly about it in either direction.

One nit-pick I will mention with the game’s presentation however is the fact that the default camera is pulled in quite a bit more than most games of this type generally are (and there’s a reason for that). This can make some hectic moments – where lots of racers are bunched up together – that much harder to navigate out of, as well as just generally limiting your peripheral vision, which is not a good thing. I understand that Milestone is probably trying to show off their noticeably improved graphics but, in this case, it can come at the cost of functionality. I also would have traded in the upgraded graphics for a better frame-rate personally. With some games, I understand the argument for detail and high resolutions over frame rates, but with racing games I just don’t. The PS4 pro runs the game at a very solid 30 frames, but again something higher than that would have been nicer to see, even if it came at the cost of some of these new visual bells and whistles. 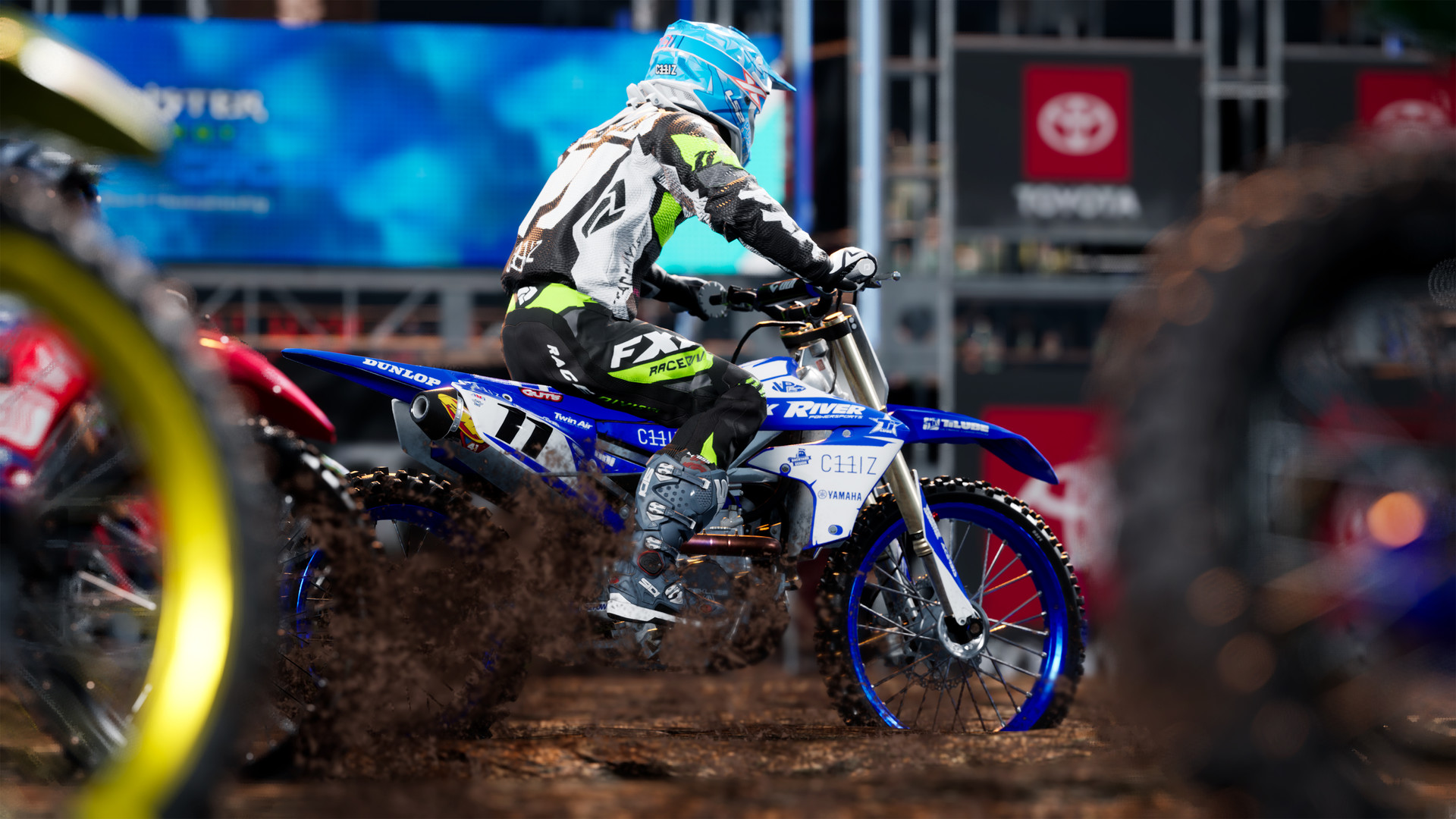 "The PS4 pro runs the game at a very solid 30 frames, but again something higher than that would have been nicer to see, even if it came at the cost of some of these new visual bells and whistles."

On the audio side of things, you have a pretty similar story. The bike sounds have noticeably more depth to them than most other motocross games, but that’s to be expected, and other than checking off that particular box it doesn’t do much with the sound to really blow your socks off. The bikes sound distinct from one another, but not so much that you would notice without paying close attention to a side-by-side comparison. I was expecting a bit more of a crunch upon landing to let me know how good or bad I was hitting the slopes, but there wasn’t a whole lot there. And if you’re not in the mood for an incredibly intense and frenzied soundtrack, you’re out of luck. Every tune you hear from the main menu to the final race sounds like it came right out of a can of Monster Energy, which I suppose is the point, but it would have been nice to have a break from it here and there. At least while in the menus. Maybe I’m just old.

Something else Supercross 4 has on its predecessor is the significantly improved way ruts are handled on the track. While the previous game barely showed any effect for landings and slides to have on the dirt, here, ruts are clearly visible as they are constantly being created and overridden. It looks nice and helps sell the immersion more than it might seem like just watching a video of the races. I just wish they went a little further with it and let the dirt build up and break down in bigger and more impactful ways. Still, it’s nice to see this much improvement over the last game. You’re not going to see any of the track’s main grooves get blown out, but the impact that riders have on the track is a nice touch, albeit a bit more superficial that I would have liked it.

With a more realistic approach to ruts and track design also comes a strikingly more responsive handling style. This is one of the biggest changes you’ll probably notice for the 4th game, as your momentum is much more malleable depending on the topography you’re dealing with at any given moment, and while that is more realistic, it can take some getting used to for folks that are more arcade-oriented. That said, getting this down pat and learning the ropes in this more realistic manner is extremely satisfying once it all clicks. And until it does click you can feel free to make use of the rewind feature which is something that some folks don’t normally like to see in racing games as it makes it feel kind of cheap but the good news is that here, you only have a few uses at the start of a race and you have to earn additional uses of the ability to rewind by doing more spectacular things and generally racing well so that’s a nice counterbalance that I think most purists should be able to tolerate. 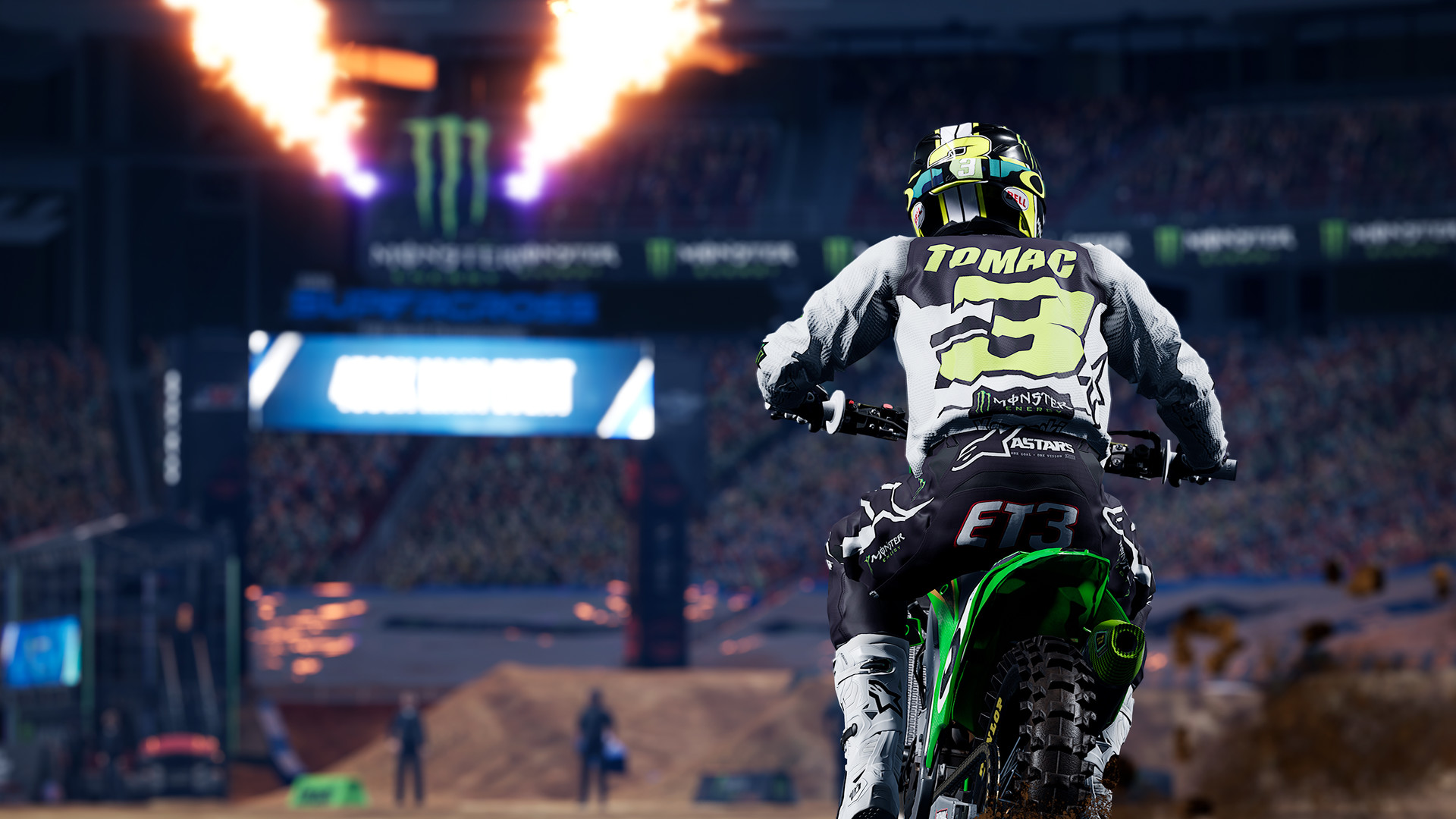 "Something else Supercross 4 has on its predecessor is the significantly improved way ruts are handled on the track. While the previous game barely showed any effect for landings and slides to have on the dirt, here, ruts are clearly visible as they are constantly being created and overridden."

At the end of the day, Supercross 4 is a nice improvement over the last game. So much so that I would say that it definitely warrants its existence for those who enjoy the genre, and that’s not something I would say about a lot of modern motocross games. This one gets the formula right where it counts, with the balance of options and customization with pure skill and challenge. It doesn’t hold your hand but it also gives you plenty of tools to race your way and ultimately become better faster than you would in a game with less interest in the player’s personal proclivities. For that, it’s an easy recommendation for veterans. The game’s new ideas and visual upgrades do outweigh its shortcomings in my opinion, but If it could have only spent a little longer in the oven and ended up with either a better frame rate or a more satisfying auditory experience, then we would really have been cookin’. Even still, as it is, Supercross 4 isn’t a bad ride at all.

New, good-looking graphics and more malleable tracks really help sell this game as a true successor to the previous entry.

Lackluster audio and mediocre performance hold it back from truly being something special.

Final Verdict:
GOOD
Supercross 4 is as big of an improvement that we’ve gotten in the genre for a while, but that’s not saying much. A good amount of content and some new ideas round things out nicely, though.
A copy of this game was provided by Developer/Publisher/Distributor/PR Agency for review purposes. Click here to know more about our Reviews Policy.