Monster Hunter is one of the top games you can buy for the PSP, especially in Japan where the game is incredibly popular. The game has had a few releases in the U.S. including two PSP games. Now the definitive Monster Hunter game has finally come to the PSP, Monster Hunter Freedom Unite. The game improves on almost every aspect of the previous PSP releases. I say almost because the game still has some nagging issues that keeps it from being as good as it could and should be.

Monster Hunter Freedom Unite begins with your hunter waking up in Pokke village after being knocked out on the way there. From there you begin to look around the town to find the shops, important people, and the all important Gathering Hall. The Gathering Hall is where you will be getting the majority of your quests and play with others, but we’ll get into that more later on. You start the game with novice gear and warm clothes, just enough to take down the simple monsters. By the end of the game all the gear in the world won’t keep you safe from the monsters you will be fighting. 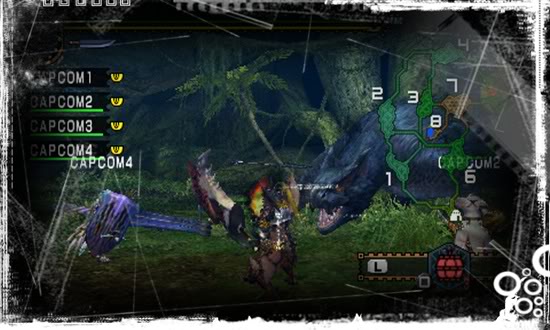 Monster Hunter Freedom Unite requires a lot of tactics if you want to be successful. You can’t simply accept a mission and hack n’ slash your way to victory. The game will punish you with defeat after infuriating defeat if you don’t plan ahead. All planning should start by understanding your mission. Missions take place in a variety of locations from snowy peaks to scorching deserts all the way to tropical forests. They all look very nice on the PSP and really push it sometimes. They also give off a great atmosphere as you will hear monsters in the distance, blaring winds, and insect noises all around. You must also take into consideration what kinds of monsters you will be fighting and the best armor and weapons with which to fight them. Going to the desert to fight flying creatures with a heavy sword and warm clothes will not get you far at all. The game allows you to hold different weapons and armor, as well as any other items you can fit, in a chest at your cottage. This allows you to be able to change your equipment on the fly depending on the mission.

That’s not all the planning that goes into a mission though, this game would be easy if it was and that is most certainly not the case. You must examine the area around you and plan your attacks. You can lay a variety of traps and sneak around to put yourself in the best possible attack position. That’s the easy stuff; the hard part is putting planning into action. The monsters, while not always too smart, are powerful and will deal a lot of damage if you are not careful. Experienced players and new players alike will find more than a challenge in the missions they will embark on. 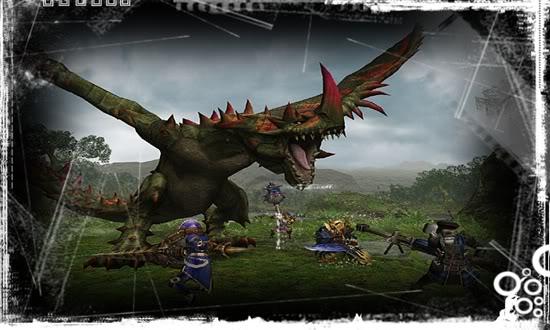 The missions themselves come in different difficulty levels. The easiest are the one star missions, followed by two stars, all the way up to six. Once you can beat the six star missions with some ease it’s time to try the new G rank missions. These missions will put even the most seasoned hunters to the test with the strongest monsters and hardest objectives, as well as the best rewards the game has to offer. Before you worry about those, you will have to complete the lower level quests to improve your Hunter Rank. Your Hunter Rank is what gives you access to new and higher leveled missions. It increases as you complete missions in the Gathering Hall.

Now before you go thinking, “Man those sound hard, I’ll never be able to do that by myself,” you’re in luck. The game features Ad-Hoc cooperative play with up to three other players. Now you and three friends can embark on any and all Gathering Hall missions as well as Co-op only treasure missions. Unfortunately the game makes the HUGE mistake of leaving out Infrastructure play so unless you have three friends with PSP’s AND Monster Hunter Freedom Unite you’re out of luck. It is both confusing and so very annoying that in this time of online gaming any game would release without this ability, especially a game like this that relies so heavily on tactics and teamwork.

While Monster Hunter Freedom Unite is, for the most part, the same as Monster Hunter Freedom 2 there are some new features. You now have the ability to hire Felyne fighters and chefs who will fight and cook for you. The game now offers a way to download new missions via the internet. So while you won’t be able to use it to play, you can use it to get some new missions for free.

Now for those nagging issues…you thought I forgot about those didn’t you? Monster Hunter Freedom Unite is far from perfect, as if the lack of online play wasn’t making that obvious enough. It seems that the developers still can’t get an easy camera system into the game. You’ll constantly be struggling to keep your target on screen until you get the hang of using it. With the amount of things going on in combat, the last thing you want to worry about it the camera, but you will be babysitting it often if you want to keep the action in your sights. There are also some issues in multiplayer like players attacking monsters others can’t see. It’s also unfortunate that the game doesn’t make itself very open to newcomers. Most new players will become very frustrated with the game as they must repeatedly reattempt missions because of the initial difficulty. Even after you get the hang of things the game is still hard, sometime too hard making it more frustrating to play than fun. Some very minor issues include the occasional frame rate drop and the fact that the people’s voices can really get annoying after hearing them for the 10th time, if you can call the noises they make voices.

Tons of quests, monsters, and fun with friends.

Lack of Infrastructure play is inexcusable. Game can be frustratingly difficult at times. Camera takes getting used to.

Final Verdict:
GOOD
The definitive monster hunting game is back with more monsters, more missions, and the same old problems.
A copy of this game was provided by Developer/Publisher/Distributor/PR Agency for review purposes. Click here to know more about our Reviews Policy.