Arcade racing in a monster package.

Everyone knows that monster trucks are cool. Whether or not you’re in the front row cheering at your nearest rally, the sheer ambition of watching a larger-than-life four-wheeler doing tricks and crushing anything in its path is undeniable. Monster Jam: Steel Titans 2 puts you back behind the wheel of one of these behemoths, sending you both into packed arenas and expansive open worlds. In many ways, it captures much of the essence of why monster trucks are fun and transfers it effectively to a game in some unexpected ways. Occasional design frustrations and physics hiccups keep it from hitting the sweet spot directly, but for as many ways as the game could have gotten stale or annoying, I found myself continually impressed with the wide variety of fun, arcadey gameplay.

As you might expect for a monster truck game, much of Steel Titans 2 consists of grandiose competitions in arenas. Some of these are quick races no more than a minute around a small track. Others are trick-based, from normal freestyles to more unique ones, like the event where the only combos that count are ones that include two-wheeled tricks and the destruction event where you barrel through as many of the cars and boxes as possible in a certain time. These events aren’t treading any new ground from the first game, so they benefit from being as short-lived as they are.

"In many ways, Monster Jam: Steel Titans 2 captures much of the essence of why monster trucks are fun and transfers it effectively to a game in some unexpected ways."

It’s mostly enjoyable to do a race or trick event quickly for a quick shot of competition, but when you start to do more of them consecutively, the repetition becomes more of an issue. The number of tricks you can perform is limited, with the backflip being the most exotic trick there is, and the races inside the arena lose their luster after a while. Luckily, the career is split into series of three or four of these events at a time, so you’re rarely forced to do so many at once as to become stale. The Championship events are a different story, as they’re far longer, more tedious repetitions of the same few events, and are generally less enjoyable than any career event or exploring the world.

Where Steel Titans 2 differs from an actual monster truck experience is the events that happen outside the arena. When you’re not in a packed stadium, you’re in one of a handful of mostly dense open areas that are surprisingly fun to traverse. The environments are a mixed bag of creativity, ranging from a wide-open desert to a true dog park, but they all encourage exploration. You’re not required to find anything around the environments to progress the career, and there really isn’t that much to find in total. Regardless, the enjoyability of driving the trucks makes exploring that much more satisfying anyway. Even without looking for any collectibles, I was constantly trying to reach new heights or find new paths for the sole reason of seeing if it was possible.

Many structured events take place in the open environments, too, usually in the form of longer races. Instead of the minute-long arena races, the outside ones are more familiar waypoint races that traverse larger parts of the world. The only twist to some events is the derby races, which face half of the trucks in the opposite direction and encourage ramming into each other head on. These outside races allow the gameplay to embrace its arcadeyness more so than the arena ones, which is why they’re more fun. In a lot of ways, it almost feels like a grown-up cart racer, and it’s clear that there are a lot of pieces of games like Mario Kart floating around here, even if it’s a bit more macho in this package. Everything from the precise drifting to the boosts and the simple feeling of total control over your truck invite the comparisons to the cart racers that came before it, and it puts up an impressive fight against the competition. I really enjoyed most of the time when I wasn’t constrained by the confines of the arenas because I had free reign to utilize the truck’s arcade-like feel. 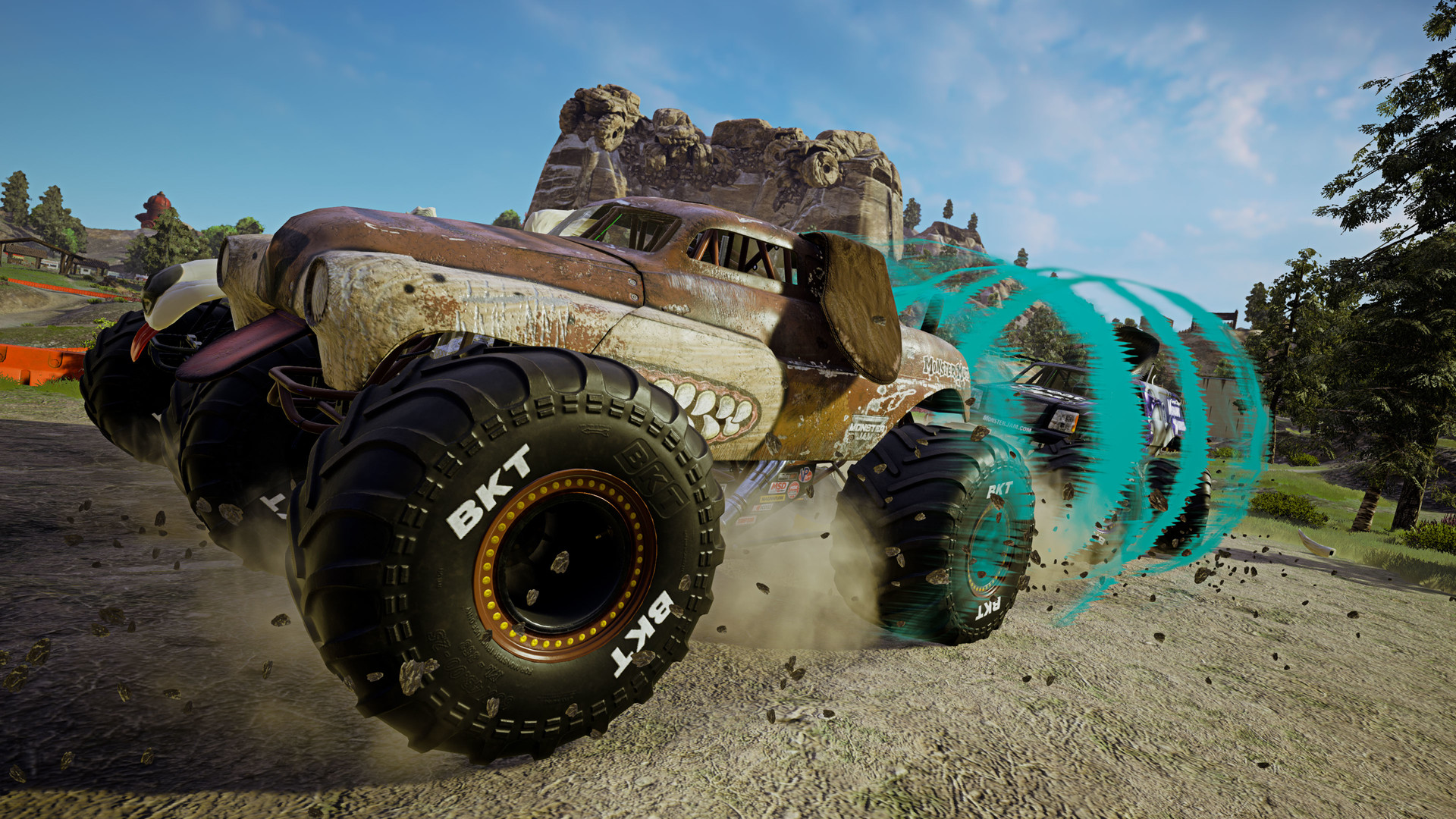 "Where Steel Titans 2 differs from an actual monster truck experience is the events that happen outside the arena. When you’re not in a packed stadium, you’re in one of a handful of mostly dense open areas that are surprisingly fun to traverse."

The game falls short of truly meeting the expectations of its arcade racing peers, though, by not fully embracing it. Primarily, the game often feels internally conflicted as to whether it wants to simulate what a real monster truck would do or allow you to be as ambitious as you want with no regard for reality. In this case, the former often holds back the latter. It’s natural that it doesn’t want every truck to do any trick in the book, but I found that the game’s physics tended to punish you for trying to go for it all instead of rewarding you, most notably with the result of your truck flipping over.

In both inside and outside events, trucks flipping over becomes almost comically frequent, but it shifts to frustration when it feels like the game is trying to stop you from doing its most fun activities. I began to be afraid of gaining too much speed or even trying to pull off a normal drift because I couldn’t tell when my truck would flip, and in almost any event, inside or outside, race or skill, flipping meant almost certain failure or loss, especially in outside races, where losing any time trying to reset could put you to the back of the pack for the rest of the race. Some environments, especially the final two, suffer from being too prone to flipping as well, and despite being visually interesting to explore, I couldn’t wait to get out of there to avoid having to reset yet again.

A similar problem pops up with the signposting within races themselves. The game is often woefully subpar at indicating the direction of the race’s path, often showing arrows just a split second before you need to turn. This might seem unimportant, but it becomes all too easy to veer off the track because you had to make a sharp turn, which either flips you over entirely or makes you lose a bunch of time, and with races that effectively eliminate you from contention if you make such a mistake, it’s a frustratingly common occurrence that’s outside of your control. 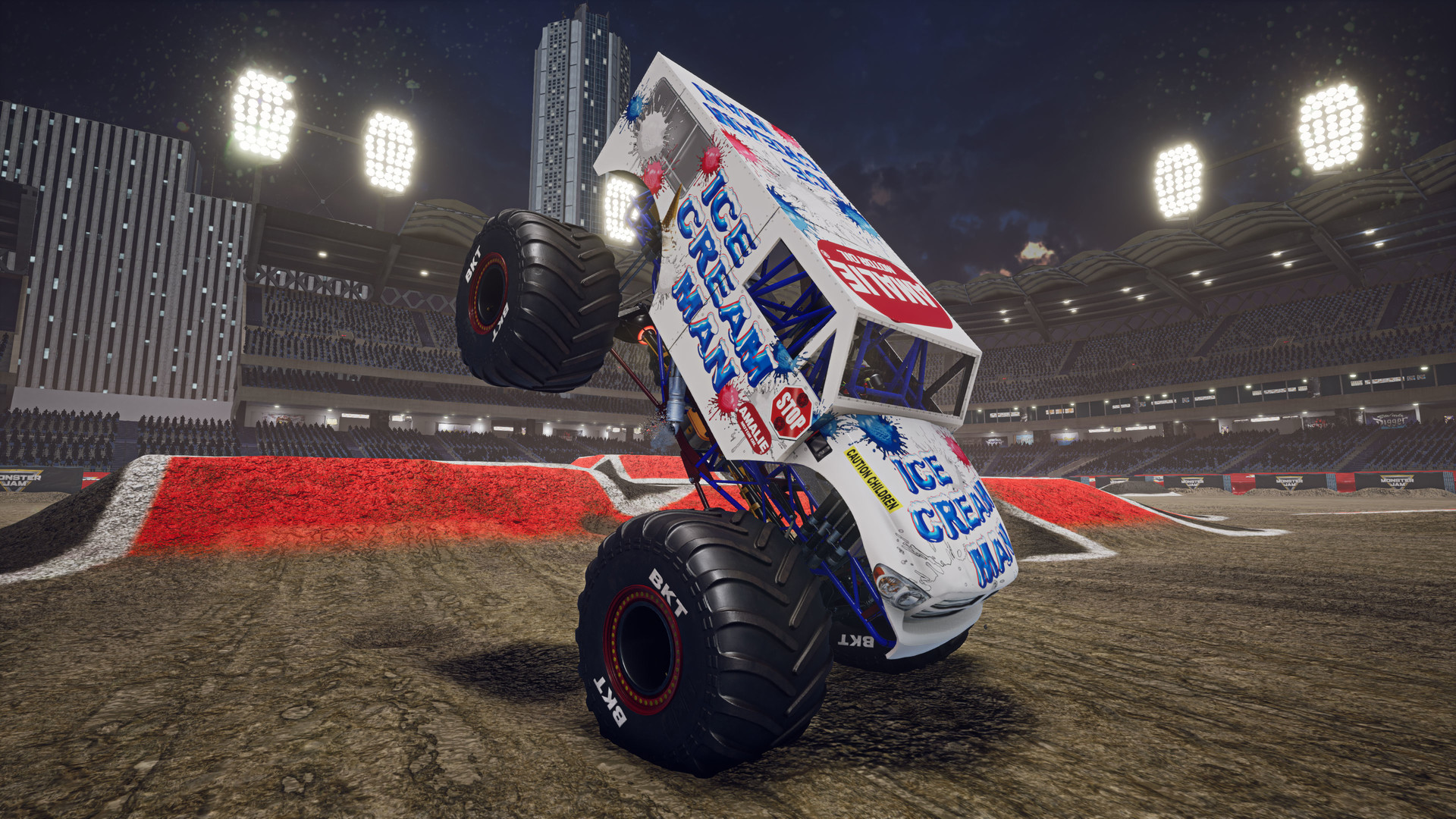 "In both inside and outside events, trucks flipping over becomes almost comically frequent, but it shifts to frustration when it feels like the game is trying to stop you from doing its most fun activities."

Steel Titans 2 is, consequently, at its best when it leans into the arcadey gameplay and over-the-top tone that make its best moments. Many of the trucks themselves are ridiculously designed, from the Higher Education school bus to the new Backwards Bob reverse pickup truck, and there are countless nods to other games and media that show that this game doesn’t take itself too seriously. There are dozens of trucks to unlock, whether it’s through the career mode or through finding collectibles or completing other modes, and every new truck is as much a sign of progression as the percentage sign because of how much I enjoyed trying new vehicles. They don’t always drive as uniquely as the game would like you to think they do, but just driving around in a big ice cream van or a military jeep was enough for me. Its environments and models aren’t always the most visually striking, but they’re colorful and diverse enough to stay engaging throughout. It doesn’t always run perfectly, either, with framerate drops common, but when it does perform at its highest capacity, it’s generally a great time, and the ability to go online to race against others is just another welcome addition to the package.

Even if the real-life Monster Jams might be intense, the best parts of Monster Jam: Steel Titans 2 are what it takes from the arcade racers that influence it. The open worlds offer surprising depth and a lot of things to do, even if you start to create those things on your own. The single events are mostly fun interludes, especially those that happen outside the arenas, though the game starts to fall apart when it works against itself and inhibits the ambition that makes monster trucks exciting. I enjoyed Steel Titans 2 when it embraced the arcadeyness that make its best aspects, and while some seemingly minor flaws make a significant impact on gameplay, there are a lot of things going for it when it clicks on all cylinders.

Final Verdict:
GOOD
Monster Jam: Steel Titans 2 is at its best when it embraces the arcadeyness, depth, and lightheartedness that define its most exciting moments, though it sometimes punishes the very ambition behind those aspects.
A copy of this game was provided by Developer/Publisher/Distributor/PR Agency for review purposes. Click here to know more about our Reviews Policy.