Quick, what are the most common genres you associate with indie games? Soulslike titles, 2D action platformers, maybe throw in rogue likes in there too. Add a pixel art aesthetic on top of it all, and you end up with something that might very well describe a bunch of indie games on the market. Much like games on the higher end of the budget and marketing scale, Indies too tend to cluster around the genres and styles that they know fit best with their development pipelines, with the best chances of returns. The flip side of something like this is that when everything feels like a variation on something you have already played, some great looking stuff can get lost in the shuffle. On a list of upcoming indie games, how many separate Soulslikes will you really be able to keep track of?

Moonscars is not a roguelike game; it is, however, a game that fits pretty much every other descriptor I just named. It definitely is at least somewhat a Soulslike. It is absolutely an action platform, and very much imbibes a (striking, to be clear) pixel art aesthetic. It is the kind of game that it’s easy to lose track of, but honestly, that would be doing yourself a disservice. Broken down like that on paper, it might feel like one of many dime a dozen other games of its ilk, but honestly, in every single one of those categories, Moonscars excels. There may be many indie games that try all that Moonscars does, but very few that try it quite as well.

This is immediately evident the minute you boot it up – it’s got a gorgeous aesthetic that stands out, with some beautiful art done justice by some of the best use of the pixel aesthetic I’ve seen in a modern game, and some amazing use of contrasts of dark shades that really adds to the mood and atmosphere. The visuals of the game immediately establish its overbearingly dark presence, themes, tones, and story – something that the game’s opening then proceeds to reinforce. The story and storytelling of Moonscars is probably the one place where it doesn’t quite do justice to the inspirations that it wears on its sleeves. It’s standard Soulslike fare – told in cryptic half indecipherable dialogs and cutscenes that tell you absolutely nothing about anything. It’s really difficult to follow the story, or to even muster the energy to be interested enough to follow along. But very honestly, that hardly matters, because the story knows to get out of your way almost instantly, and get you down in the action.

The game’s brilliant design becomes clear almost immediately once you start playing it. The controls are tight and snappy, the combat has a nice crispy feedback to it that makes it immediately compelling, and the level design and layout starts becoming a challenge almost immediately, with you seeing inaccessible areas almost right off the bat, and being funnelled back to them and opening up shortcuts just shortly later. Combined with the strong impression the combat makes, the gameplay makes a very compelling case for itself right off the bat. 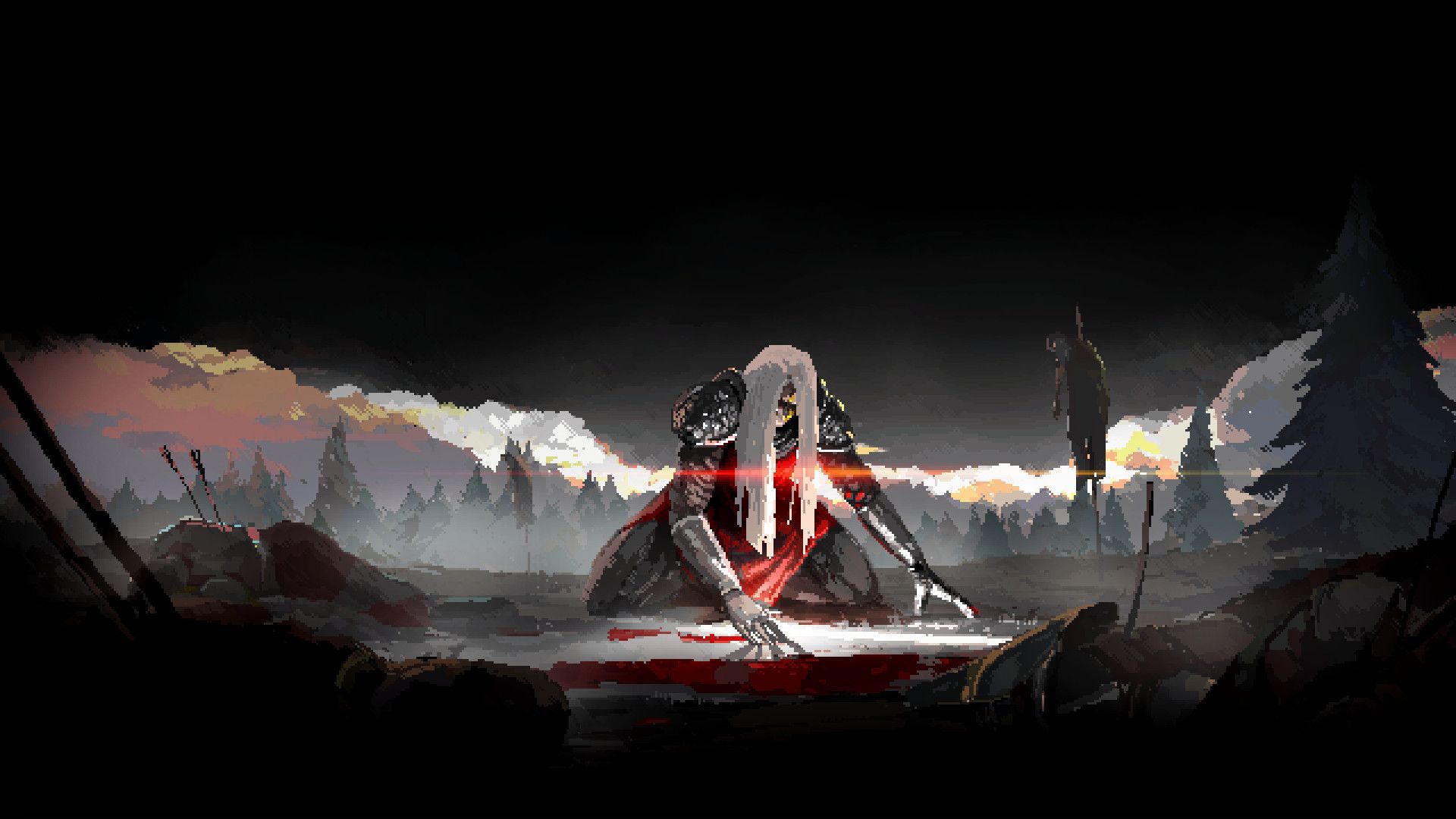 "It’s got a gorgeous aesthetic that stands out, with some beautiful art done justice by some of the best use of the pixel aesthetic I’ve seen in a modern game, and some amazing use of contrasts of dark shades that really adds to the mood and atmosphere. The visuals of the game immediately establish its overbearingly dark presence, themes, tones, and story."

From there on, it only continues to build on its strengths. Take the combat, for example. Backed by some incredible animations, great enemy behaviour, and the aforementioned snappy controls, you feel in full control of Grey Irma, the undead protagonist (of course it’s an undead protagonist, this is a Soulslike after all) you’re playing as. From her movement to her attacks, every single frame of animation to do with her feels in direct response to player input. This is paramount because it simultaneously achieves the feat of making the game feel fair with its difficulty (when you do die, it’s because you misjudged or messed up), while also mitigating said difficulty somewhat (it’s much harder to find something difficult when you have full control over how you interact with it).

You start out simple, but soon the repertoire of moves available to Irma expands; you get ranged moves and magic, you get special moves and a parry; you get secondary weapons; as you play, you gain “temporary” levels that let you build up and accrue special perks that last until you die, while making it harder for you to die to begin with (look at that, I was wrong, it does have some roguelike elements after all). Those temporary perks, as well as the full control over Irma’s mobility and combat that you get, are key to this game feeling challenging but never frustrating. The game offers you simply so many options to lower the difficulty – you even get an instant heal that is limited only by your mana bar. A mana bar which fills up each time you hit an enemy (meaning it is very hard to exhaust). This means that you’re not likely to die to unseen traps and the equivalent of “jump scare” enemies like in FromSoft’s own games. What kills you is when you get careless or greedy, if you try to press your luck when you know you are low on health, for example, rather than retreating, or if you try to rush towards an unknown enemy or a long combo attack that you haven’t quite mastered yet. Moonscars is a tough game – but unlike so many other tough games on the market, it wants you to conquer it. And it helps you to do so.

The movement and traversal feel every bit as great to play and control as the combat, with it particularly shining due to the confluence of how the levels are laid out and how encounters are spaced within them (in turn giving you more of a reason to use your traversal abilities). The movement feeling so satisfying makes you as the player want to explore the intricately laid out levels of the game. There’s a lot to explore in this game’s world, and the more you explore, the more you find that can help you on your journey – and there is just the pleasure of a world you conquered, levels you mastered, as you loop back around and realized that the parts that gave you so much trouble are now so easy to bypass now that you have unlocked shortcuts that circumvent and sidestep them completely.

One area where the game starts to falter over time ends up being with the enemies it presents you with. Repeated “grunts” in new areas you have to get through can start to feel like busywork, especially because they pose no real challenge after a while, but you have to work through a lot of them anyway (often times, you may have to work through the same batch repeatedly, depending on whether or not you died and got respawned at a checkpoint before them). This isn’t a huge issue, because the crucial encounters in the game are all varied, and also because this is a short game, so it’s over before the repetition has had much chance to set in – but given how well tuned and crafted the gameplay is in just about every other regard, it is a bit of a disappointment that it makes this stumble. 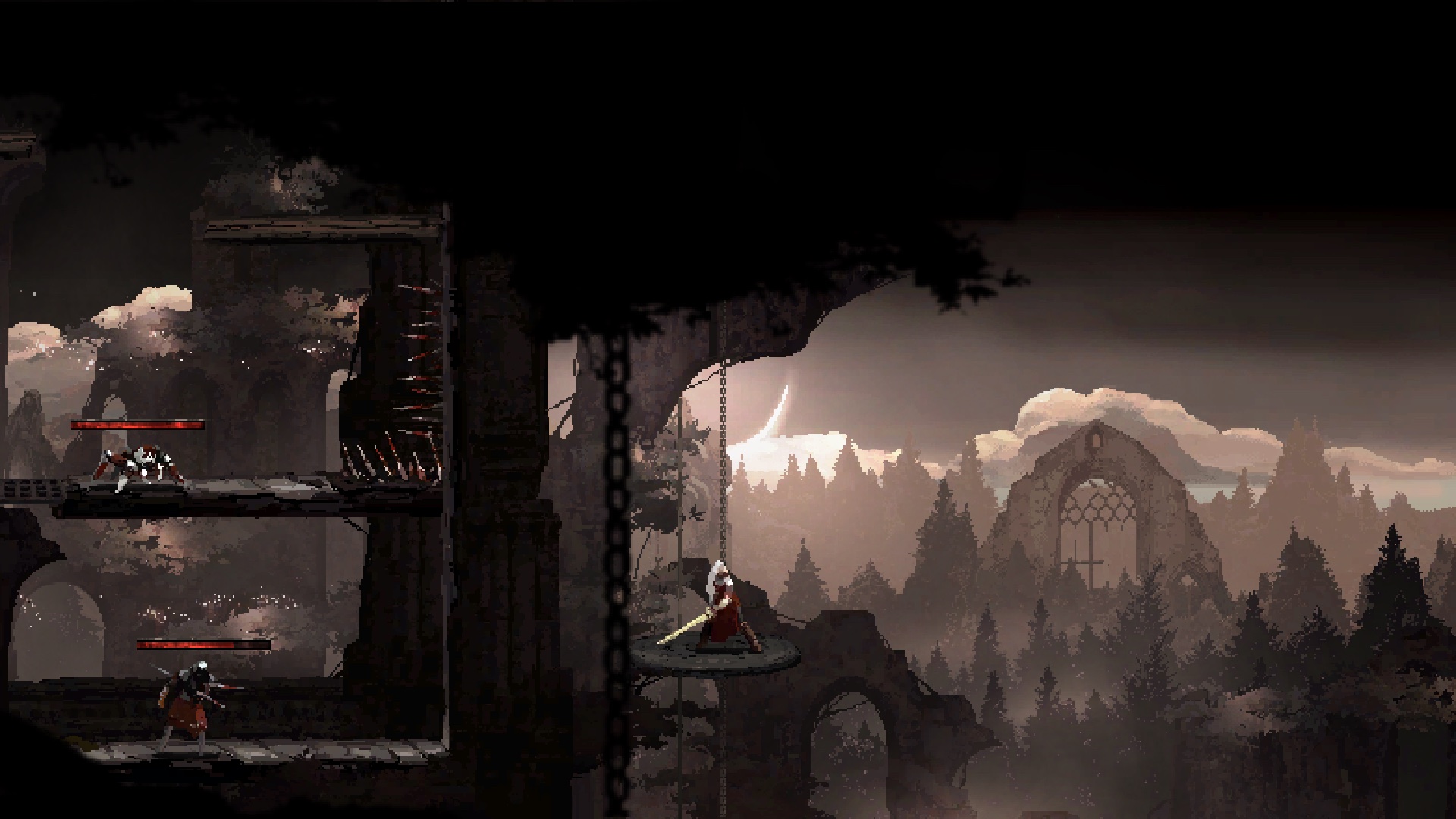 "The stumbles, however, are minute in the big picture, and hardly matter next to everything the game does well (which, to be clear, it does so well that anyone who has an interest in any of the various things Moonscars is trying owes it to themselves to give it a go)"

The gameplay isn’t the only area of the game with an unforced error either – as gorgeous as the game looks, the music is completely forgettable. I will say that to its credit it’s not bad, and at the very least it does contribute to the mood and tone the game is going for, but it just could have been so much better. Soulslike games especially are full of endless examples of ambient and moody soundtracks that manage to be incredibly memorable as well, and again, given how strongly Moonscars performs in most other areas, it’s a bit of a shame it stumbled here.

The stumbles, however, are minute in the big picture, and hardly matter next to everything the game does well (which, to be clear, it does so well that anyone who has an interest in any of the various things Moonscars is trying owes it to themselves to give it a go). I started this review by noting that 2D pixel art action platform souls like indie games are over abundant – Moonscars doesn’t necessarily fix that problem, but it does truly stand out in an increasingly crowded segment of the market by acquitting itself through sheer mastery of almost everything it sets out to do, delivering a compelling and well playing, one that knows not to outstay its welcome, and one where its few flaws can’t detract from its overall appeal.

Soundtrack is disappointing; story is cryptic to a fault

Final Verdict:
GREAT
That Moonscars is like so many other similar releases only serves to make its ability to differentiate itself and stand out that much more remarkable. A well accomplished title that is easily recommended to anyone with even a passing interest in the genre.
A copy of this game was provided by Developer/Publisher/Distributor/PR Agency for review purposes. Click here to know more about our Reviews Policy.