MotoGP 21 Review – Another Lap on the Same Track

Milestone’s most recent efforts in the motocross and MotoGP genres have been generally decent as marginal improvements over their predecessors with tweaks to their gameplay that ranges anywhere from noticeably positive to the imperceptible and to the slightly disappointing. Thankfully it’s been mostly the former over the last couple years. While some might not feel like these incremental steps forward are worth the asking price for these games at launch, it is nice to see Milestone’s racing games getting better overall. MotoGP 21 basically fits into that slow-but-(mostly) steady drip of improvements.

Of those improvements, most noticeably, is the way the game runs on the PS4 Pro. I was hitting a solid 60 frames during gameplay almost 100% of the time in framerate mode, which was nice to see given that last year’s game was not quite as reliable at launch. I guess we should expect as much though, given that the character models, tracks and bikes all look like they are completely re-used from last year’s game with no noticeable improvements. With the bikes, I suppose that’s fine as they still look great, but the human character models and environments still look decidedly dated. I don’t know for sure if these weren’t touched at all between last year and this year, but I wouldn’t be surprised to learn that they hadn’t been. A little more effort put into improving graphics across the board would have been nice, especially considering this series prides itself on its simulative aspects, and not being just another arcade jaunt.

The game has a handful of modes that you will recognize from last year including quick modes, multiplayer, championships, and of course the career mode. Career mode is as detailed and nuanced as fans of this series will likely expect. Managing contracts, teams, and managers is all here and will influence the way you race and how you view each race within the greater context of your career path. There are plenty of events spanning across the globe to places like Argentina, Germany, Thailand, Austin Texas, and everything in between. While that variety is nice on paper, in practice it really doesn’t change much about the tracks. Slightly different shades of the same pavement, sand and grass await you at every track, and with most races being set to six laps by default it can get a little long in the tooth for anyone who isn’t a hardcore MotoGP fan, which is one reason why I’m surprised more effort wasn’t made to appease that hardcore fanbase with better graphics. The game was not officially released at the time of writing this review, so I can’t speak to how well the online functionality works, but it is there.

"Slightly different shades of the same pavement, sand and grass await you at every track, and with most races being set to six laps by default it can get a little long in the tooth for anyone who isn’t a hardcore MotoGP fan, which is one reason why I’m surprised more effort wasn’t made to appease that hardcore fanbase with better graphics."

Racing in these environments feels good in that it feels about like last year’s game. Last year’s game was certainly not broken in this department, so Milestone clearly saw no need to fix it, and that was a wise choice. Taking corners can be as punishing or as easy as you want depending on your build, but the key is still managing the balance between your speed and you’re turning angle. Tighter corners require slower speed and perhaps more braking, but go too slow and you’ll wipe out. Go too fast, and you’ll end up in the sand or dirt where you will also probably wipe out. You can recover from a turn that was taken too widely without falling, but you may still incur a penalty which you can either deal with or take a shot at reversing it by completing one of the track’s narrow outside loops. How well you’re doing in any given race will decide if this is worth it for you. The long and short of it is that there are no shortcuts here. You need to be good at the game to get anywhere and that’s exactly how this sort of game should be.

The customization fans enjoyed from the last game also seems to have been largely copied and pasted here. It’s detailed enough for the character but I would have liked to have been able to do more with various facial characteristics. But as it stands, character customization is serviceable. Bike customization is more detailed, but again, nothing to write home about. It is one of the better customization suites I’ve seen in Milestone’s racing games as of late, but that’s not saying much compared to what else it out there in the racing genre. Where customization does flourish however is with the handling of your bikes. As you play you can really dig into how your bike feels with changing the hardness of your front spring, the compression and extension of your swingarms, transmission options, and much more. This is where the real meat of the game is and veterans of the series will have plenty to tinker with.

There are also more broad modifiers and handicaps that you can set for yourself like automatically tuned handling presets that might help you get through tight corners better, etc. There’s also a far more detailed and instructive set of training and tutorial races that go over the finer details that are actually a practical way that can help ease you into the experience. Dev packs can also be selected at the beginning of career races that can give you small modifiers for your engine and frame as well. MotoGP 2021 is clearly making an effort to help newcomers to the franchise and possibly even the genre cut their teeth in this game. While that does seem like an odd thing to spend so much effort on for a yearly simulation racing game that’s aimed that the most hardcore of players, it’s hard to not appreciate them being there. These things could very well make the difference for some newcomers as to whether or not they can get into this sort of thing. 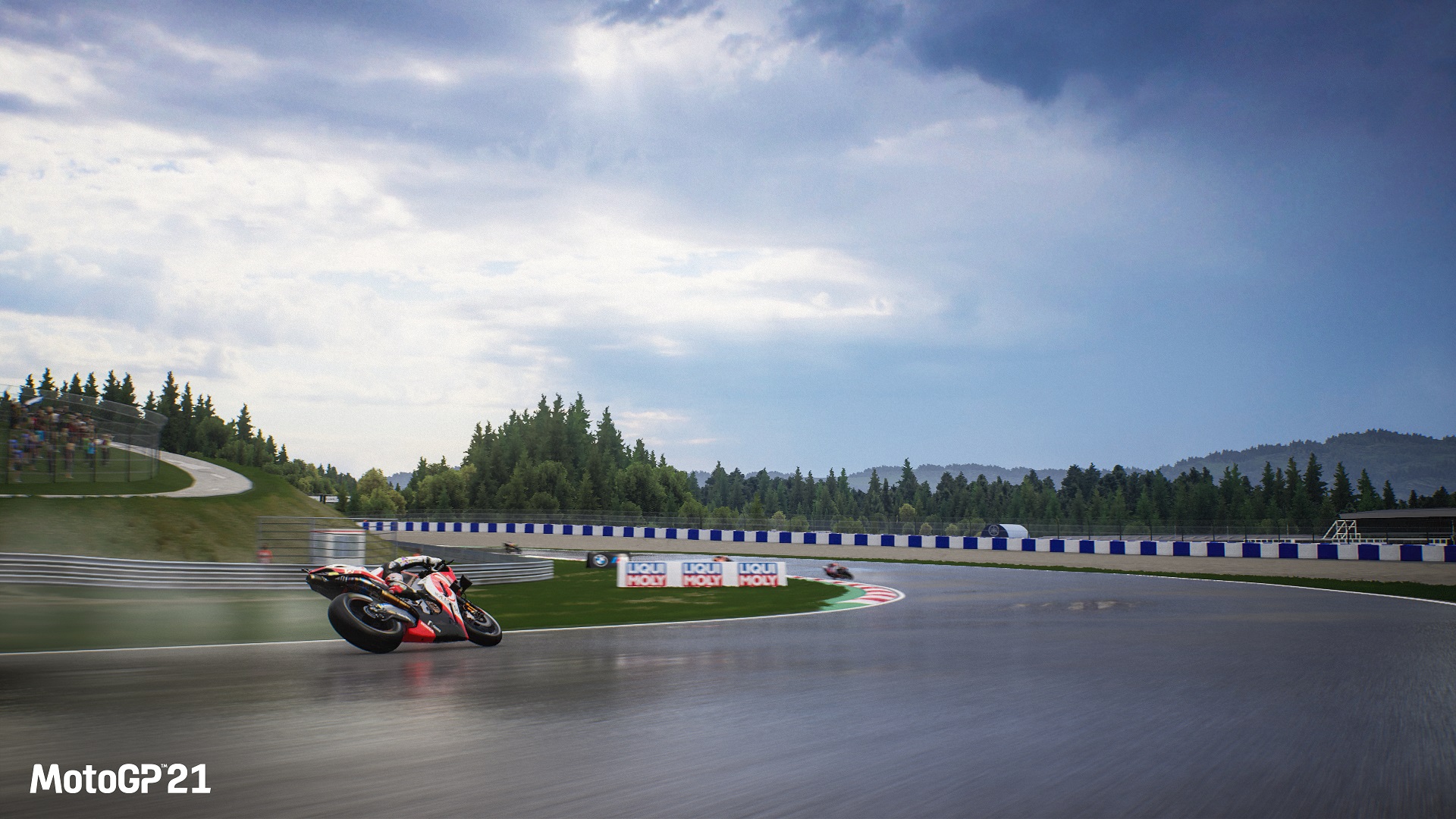 "Racing in these environments feels good in that it feels about like last year’s game. Last year’s game was certainly not broken in this department, so Milestone clearly saw no need to fix it, and that was a wise choice."

However, the appreciation that I feel for all of that is dampened somewhat by some technical issues are definitely present. Multiple events got stuck on the loading screen and forced me to restart the game, and for whatever reason some of the cutscenes and menus suffer from stuttering and lag. Not deal breakers by any means but it’s worth a mention.

Whether MotoGP 21’s improvements to the series are enough for you to pick up the game at full price is up to you. I could easily understand picking it up or passing on it depending on your level of devotion to the series. The more into these games you are, the more I would recommend picking it up, and vice-versa. There is no single reason for me to tell you to avoid it, but it also lacks much reason for me to highly recommend Milestone’s newest outing to anyone outside of its most devoted fanbase. Despite MotoGP 21’s multiple efforts to shepherd more inexperienced players into its gameplay, that gameplay is still as unforgiving and skill-based as it ever was. The more I played it, the more trouble I had shaking the feeling that Milestone’s development time could have been better spent on including more gameplay modes and ironing out technical issues, rather than going above and beyond to corral non- MotoGP fans into its new game. Despite all of the gratuitous tutorials and gameplay assists, MotoGP 21 is still clearly designed around the expectations of its hardcore audience – as it should be. I just would have preferred a more polished and fully-featured version of this game that perhaps didn’t put so much effort into acquainting new players with its nuances, as opposed to the current balance of those two aspects.

MotoGP 21 is an overall net-improvement to last year’s game, and fans of Milestone’s games have little reason to worry about enjoying their time with it.

MotoGP 21’s improvements are mostly made up of unremarkable tweaks and a few changes that could have easily been expansions to last year’s game. Also, the graphics for everything that isn’t a bike still look many years older than they probably should.

Final Verdict:
GOOD
MotoGP 21 continues Milestone’s slow crawl of tweaks and improvements, which will be fine for most enthusiasts, but still falls short of being universally recommendable to a broader audience.
A copy of this game was provided by Developer/Publisher/Distributor/PR Agency for review purposes. Click here to know more about our Reviews Policy.