The weak and shameless won't be seen.

If you were ever into PC gaming during the late 90s, you may have heard of the Motocross Madness series, a motorcycle racing game that was revered for its (at the time) fantastic visuals and engagement factor. Not to mention those wacky crashes! Thirteen years later, and Microsoft has decided to revisit the franchise once more, injecting their Xbox Avatar theme into the mix.

Bongfish (Red Bull Crashed Ice Kinect, Harm’s Way) is once again called upon, for another shot at the extreme sports centric genre. Suffice to say, it’s a much improved effort over the last outing. While Motorcross Madness does capture some of the elements that made the original series so memorable, there are still bumps and hazards that get in the way of truly making it stand out from the pack.

"You can level up to earn an ability to knock down racers from the side, but I didn’t find it all that effective."

Right from the start of the tutorial, controls and handling take some getting used to. Your skill set is tied to a level-up style progression, where you earn experience and cash over a variety of race modes based on your ranking and the number of stunts you perform. Essentially, the more you level up, the more abilities you will unlock to use in races such as performing tricks with the Y button or boosting in the air. 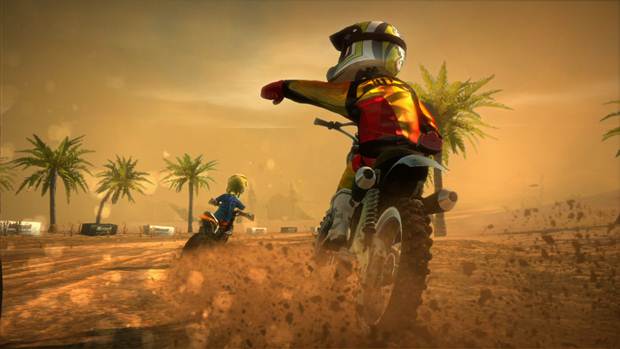 During your time in the game’s career, you will need to place yourself in the top 3 for each race is crucial to unlock additional events. These races can be divided up into four types: Single races against the AI, Time Trials, an open-world style Exploration mode, and a variation of the latter which focuses on performing Tricks. There are a total of three themed locations to race through, with plenty of individual tracks to slug through.

However, you’ll realize that not everything is all sugary gumdrops. While the environments give off great scale, the overall image quality feels choppy. I know it seems childish to complain about an outdoors motorcycle game looking too muddy, but that’s what Motorcross Madness is. When its not having trouble loading all its textures during the start of a race, objects in the distance take time to render. That, and the occasional lensflare obstructing your view when you’re trying to climb uphill. Seriously, what’s up with that?

"Motorcross’ saving grace comes in the form of the Exploration mode. "

I’d be willing to overlook the graphics if it weren’t for the dodgy collision and track designs. Its a given that hugging fences or any side of the road is a strict no-no, unless you’re looking to hilariously bail out over chasm yonder. But there are times when you’re not even sure what hit you to make you do such a thing. Many areas in tracks feel too crowded, with tents, pillars and construction littered throughout. Every once and awhile, I would even go through the fence barriers! Its too bad, as there were times I really wanted to cut loose and go ga-ga with the boost, only to play more conservatively in the more difficult races.

It’s especially annoying when it doesn’t even seem you can knock down AI opponents. If they speed into you, there’s a good chance you’ll crash. But accelerate too fast into them, and you will still crash. You can level up to earn an ability to knock down racers from the side, but I didn’t find it all that effective. 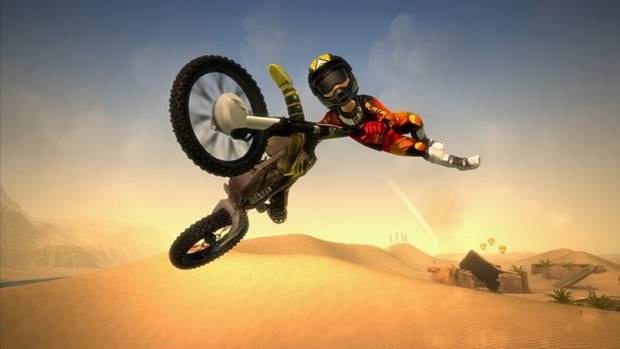 Motorcross’ saving grace comes in the form of the Exploration mode. Similar to the one found in BigPark’s Joy Ride Turbo, players will be able to transverse the same three themed locations in its full expansive glory. Placed throughout the areas are Skulls and Coins, which will net you experience and currency to spend on newer bikes, parts, apparel, etc. The real enjoyment comes into trying to obtain as many Skulls as you can, as their devious placements can be attributed to puzzle-solving.

And while I haven’t really looked at it too much, Avatar FameStar support is also included. Think of it as a cross-game programme which nets you Avatar items for completing weekly challenges. Local two player support is also appreciated, even if the problems of the presentation still carry over.

Exploration mode is a hoot. Good amount of content for the asking price. Avatar FameStar support.

Final Verdict:
FAIR
I really wanted to enjoy Motorcross Madness to its fullest. All the ingredients seem to be in place, but its stickling issues with the detracting looks and course layouts aren’t easy to overlook. Even the soundtrack feels more like an afterthought. When I want to get really pumped in a game that doesn’t seem to want me to get really pumped, you gotta draw the line somewhere.
A copy of this game was provided by Developer/Publisher/Distributor/PR Agency for review purposes. Click here to know more about our Reviews Policy.