Posted By Rashid Sayed | On 11th, Mar. 2011 Under Reviews | Follow This Author @GamingBoltTweet

Motorstorm is one franchise that Sony has not seen a lot of fan following compared to other games like Uncharted and inFamous. The first couple of games cannot be termed as premium PlayStation 3 titles even though they were pretty good and also did ok commercially.  The next game in the somewhat underrated franchise will change that. Let me be honest here, when I first started playing this game I thought this will be just another Burnout rip off, but I am glad to report that it is one of most action filled racing games I have played in recent times.

Apocalypse features a solid and a more streamlined single player campaign called as the Festival. Here you will take on the role of three characters which are nothing but a representation of three difficulty levels that are Rookie, Pro and Veteran. So basically you will have to go through the festival three times in order to finish off the campaign. As I mentioned before the campaign is more streamlined with a story attached to each of these three characters represented by a not so non sense comic style cutscenes between each race. Although these cutscenes are really not at all related to the mayhem you will be facing on the streets it does give the player a moment or two to catch their breath and take a closer look at the lives of these insane racers. 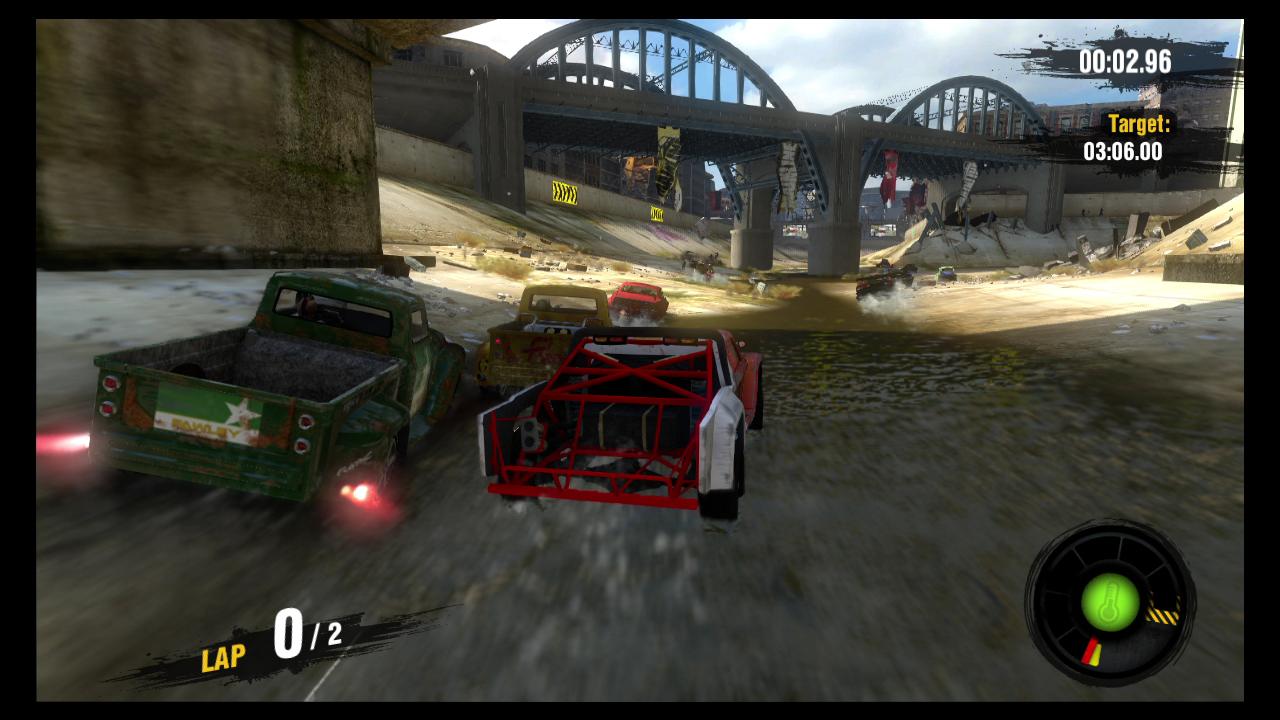 The biggest feature of every Motorstorm game has been the track deformation and Evolution Studios have taken their game higher in Apocalypse. As a race develops you will come across flying debris, planes and ship crashing towards you, massive earthquakes, towers coming crashing down and ground getting deformed. Not only that, the tribes of this absolutely chaotic world will throw grenades at you and private military helicopters will fire missiles which will create more obstacles and challenges for the player. The environments are harsh and you have to keep your eyes open since you will have no idea what will hit you next. However I would have loved if Evolution Studios have scripted these events randomly. Most of the deformation takes place in the later stages of the race which means the player already has enough idea what to expect from the a particular event provided he/she has gone through it once. This may take out some of the surprising moments and may reduce the fun factor for some players but it is one of the points that I really wanted to see in Apocalypse.

The basic gameplay of Apocalypse is divided in to four racing types. The Eliminator is where you need to be ahead of the field in order to avoid elimination. Again just like Burnout, there is a timer for each elimination, so you have to make sure you don’t crash it to any unseen objects.  Next up is the Chase mode where you have to keep the pace up with the race leader. There are a number of rounds given in this mode and depending on the position you finish you will be given points and the top scorer across the rounds will win the event. Next up is my favourite, the “Time Till Carrier” event where you have to race against time and the environments to reach the carrier so that you can escape the city. The exciting thing about this mode is that the deformation events happen more frequently hence keeping the players glued to the seat. To finish it off, the “Race” mode which is your basic carnage filled Motorstorm style races.

This brings me to the great variety of tracks that are to be found in the game. You will be racing across roof tops amidst falling buildings, towards beach side facing tsunami and the hazardous environment conditions, underneath subways while avoiding the oncoming trains and the absolutely destroyed downtown streets. There is so much variety to be found in the tracks and Evolution Studios have done a great job of making each one of them different and challenging at the same time. 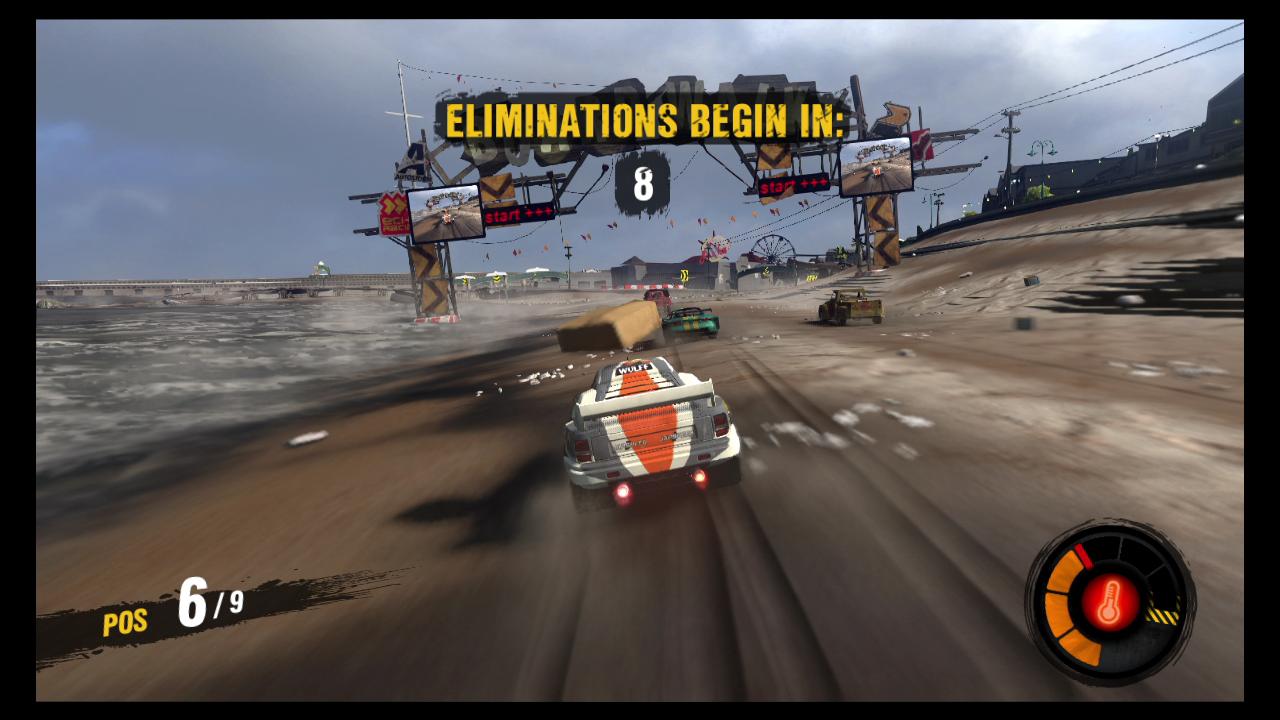 The eliminator mode is a ton of fun

Vehicles play a large role in the game. Let me put it this way. The vehicle you select will go a long way in deciding how long you are going to tick in a race.  The developers have added some new vehicles in the game which are Supercars, Superbikes and Muscle cars with each of them having their own set of advantages. For example a Superbike may be real fast but it is of no match if it tries to a challenge a racing Truck and a Buggy may be more useful in tracks which  have more runaways. So it really all depends on the type of track you are racing on. You can also use the booster so that you can cover up some ground in races but beware, use it for too long and your vehicle will blast. The good thing is that you can also cool down your boost by running over water or releasing the accelerator while you are in the middle of a large jump. Although this might seem a small addition but it may eventually decide the result of a close race. Customization in racing games is a rage these days and Apocalypse is no exception. Players can customize various parts of the vehicles like livery, packages and stickers, again nothing out of the box, but still a nice to touch to get the player involved. In addition, players can also collect cool Motorstorm cards, modify the way your vehicle handles and earn more techniques through perk points.

Motostorm is not a graphically stellar game because it does not need to be. More than being a technical showcase for the PlayStation 3, Apocalypse excels in the artistic department. The first thing that will catch your eyes when you start a race are the breathtaking environments and how evil it can be.  Bridges coming down and grounds getting unsettled have been wonderfully represented by the game’s engine. The comic cutscenes that I talked about earlier have been done pretty well with smooth animations and great lip syncing, though the real time character models and vehicles look blurry up close. Sound is a very important element for action games and for most part it works for Motorstorm. Just like with any other racing games this generation you can change the music track on the fly with the press of a button. 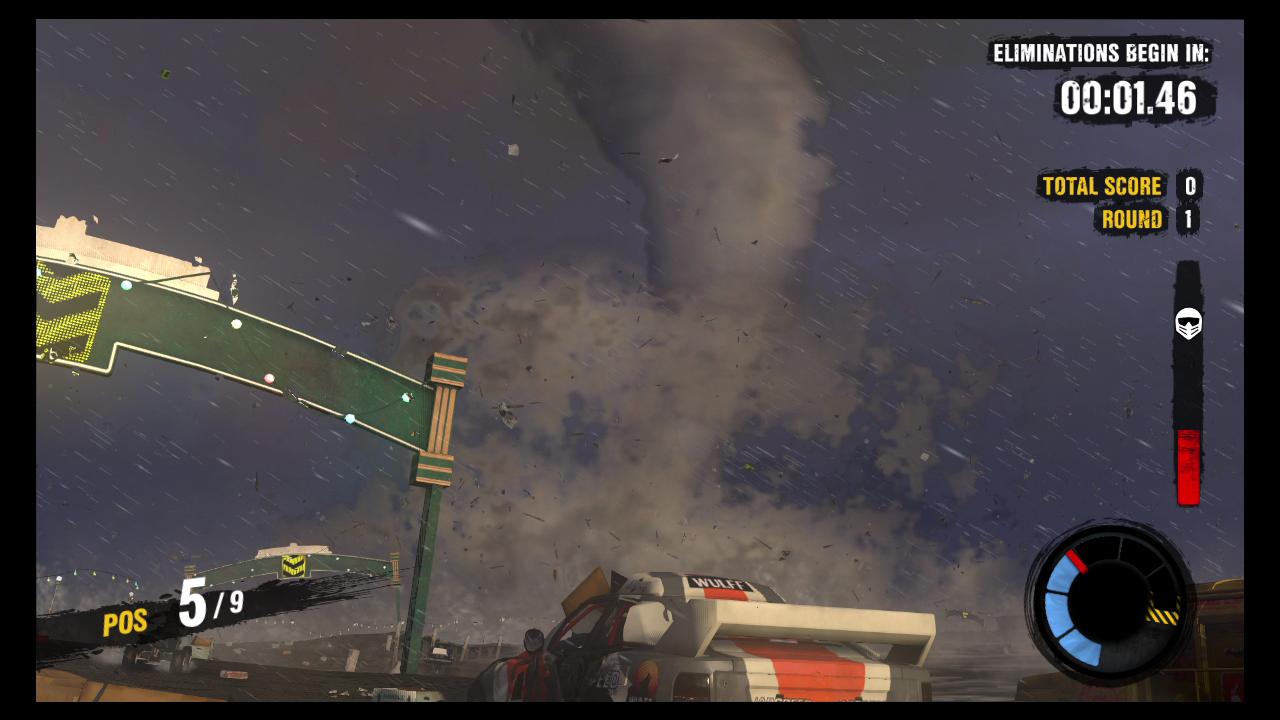 The online element is pretty solid in Apocalypse, although it has the same modes from the single player campaign (Chase, Eliminator and Race). The one good addition is the Time Trial mode where you have to just zip across the track of your choice, record your best time and upload it to the leaderboards. I can see myself easily putting hours in to it since I found it to be one of the most addictive modes online. You can also unlock chips which are nothing but XP points which will earn you medals and help unlock more customization options for your vehicles. You can also bet on results of a particular online game and if you are lucky you can earn some big time money which will help you to bring in more stuff without actually competing with someone.

The much hyped feature when Apocalypse was first shown was that the players can make their own race rules and scoring systems but I am utterly disappointed that this has not made it to the final cut. Having said that, Apocalypse is still a pretty solid entry in to the series with major improvements compared to its predecessors. With a solid single player mode and an addictive multiplayer component, Motorstorm Apocalypse should be great addition to your library.

Track deformation is insane, great variety in tracks, physics handling of each vehicle feels natural, great art style, online is a blast, comic style cutscenes are a nice addition, the sheer amount of objects that are being thrown around in race are mind boggling.

Apocalypse gets more things right then wrong all paying way to a game that is a blast to play.

A copy of this game was provided by developer/publisher for review purposes. Click here to know more about our Reviews Policy.
Tagged With: Motorstorm Apocalypse, ps3, sony