After first hearing that Milestone S.r.l would be developing a sequel to MXGP, truthfully I was taken by surprise. Purposely skipping the original due to my lack of interest in the genre at the time, I felt my feelings would be somewhat universal and continue with its successor. Motocross racers haven’t been all too popular throughout the most recent years and with other racing games making such a large impact within the genre (Forza, Project Cars, Mario Kart, Driveclub) this particular style of racing seems to have stifled somewhat.

I wouldn’t be all too surprised if this is largely down to the consumer’s interest and how the demographic is changing as the motocross racer itself hasn’t done much to evolve and keep up within the last fifteen years or so, anyway. Players have changed, trends have come and gone, and for those who fail to keep up they will finish in last place. My thoughts towards this matter seemed rather evident prior to loading up the game.

MXGP 2 is in all shape and form a Milestone game. The game loads up, you’re given the choice of player name, nationality, vehicle and colour schemes, then as Milestone tradition would dictate there’s a loading screen for just about everything and every menu autosaves upon exit. This has been an issue with all of the studio’s previous titles. Loading takes far too long that which follows and the game chooses to save even when no changes have taken place. 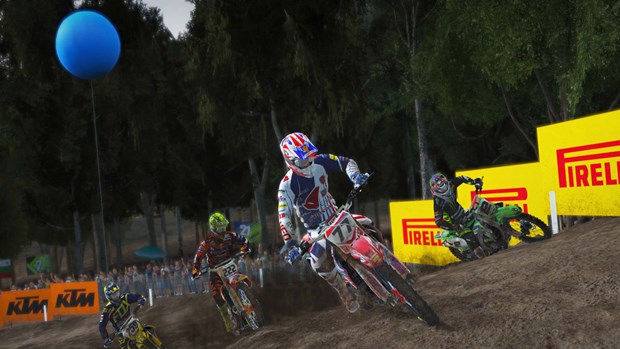 "Players have changed, trends have come and gone, and for those who fail to keep up they will finish in last place."

So what does the game offer? It offers the Milestone formula. To those not familiar with the Milestone formula, what this essentially equates to is a breakdown of the following: An emulated racing career whereby you manage a team, race for money, and become the champion. Practice to your heart’s content in what’s known as Free Riding. Compete against time-based objectives within the game’s Time Session mode. And last but not least, Motocross of Nation: play as a real-life racer from your favourite given country and compete against those in simulated, annually events. There’s also an online-mode to take part in if that’s your thing.

All of these modes are pretty much what you would find in Milestone’s other titles, give or take a few tweaks for certain specifics of the game, and all of them deliver enough motivation and enjoyment to keep the player engaged. Motocross of Nation as it stands seems to be the only game mode that’s worth anybody’s time since it’s essentially the only differing aspect about the game when looking to other racers as a whole. Had I been initially interested in the game and my feelings towards it weren’t already decided then I could easily see myself investing a substantial amount of time into the game.

Once I began my first race one thing was immediate clear and it confirmed my initial feelings towards the game before going in: This is a game for motocross enthusiasts and ten-year old boys with water pistols and rebellious attitudes. That adrenaline rush, dirt and stones spitting from the track, rock music in your ears as you rip round corners. Hate to say it but it’s dated. It’s not appealing nor is it niche, it’s just plain, old and boring. The game lacks thrill. It’s deprived of personality and it’s presenting nothing of transition that allows it to feel modern nor accessible. I mean, the gameplay is fine. As one would expect there’s an adjustable difficulty setting for vehicle handling systems; ranking from beginner to professional. Physics play greatly into each of these handling models, since all of the bikes control as they should. 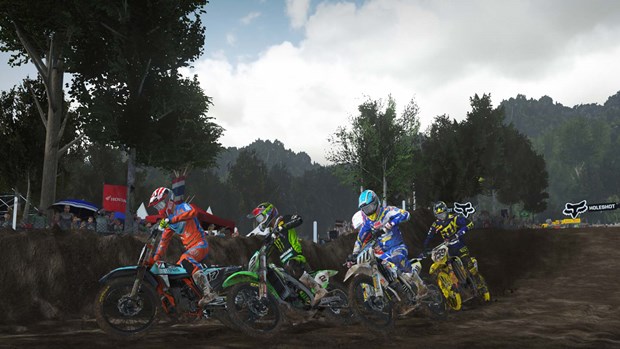 "This is a game for motocross enthusiasts and ten-year old boys with water pistols and rebellious attitudes."

The problem is, it feels exactly the same as those I’ve played in the past and I have yet to witness anything gameplay wise that makes it appealing to those outside the aforementioned demographic. Playing through MXGP 2 had me thinking primarily one thing: Motorstorm: Apocalypse, that was a good game, that needs a sequel. Differing somewhat from the racing style of MXGP 2, but one can see the similarities. There’s a bike, there’s rubble, and there’s motion blur. And frankly, that’s all the average Joe needs to see when his last deciding factor between the two games is one with a five-letter syllable, and the other being a literal translation for “Racing on judgement day”.

For the motocross enthusiasts out there, it doesn’t disappoint. The game offers up a variety of vehicles ranging from 250cc up to 450cc across 40 different manufacturers, and bordering twenty different tracks and stadiums to participate in there’s enough to keep players engaged. Following the tradition that Milestone bring to their titles, players can tweak, customize, and adjust their vehicles ranging from beginner paint choices right up to the enthusiast levels of switching out exhaust systems. This actually lends the game some weight for making the it feel your own and injecting your own sense of personality into the game which it doesn’t inherently bring. It also adds to the level of depth within the game’s vehicle handling mechanics which are in themselves simple enough to get on with, yet detailed enough to appease the hardcore fans.

Since the game also provides a selection of racers to play as all of who are mechanically based on their real-life counterparts, I’m sure the game caters well to those who know exactly what they’re doing and where each of these racer’s strengths and weaknesses lie. Unfortunately, this wasn’t apparent to me during gameplay and this probably has something to do with my personal preferences towards the game itself. There’s no doubting the differences and changes that each rider and vehicle brings to the table, but since my knowledge on such vehicles is the shortest distance of a straight-line between two points, my focus on actual gameplay was tied to the expectation of an adrenaline rush as opposed to the intricate detailing of bike mechanics. 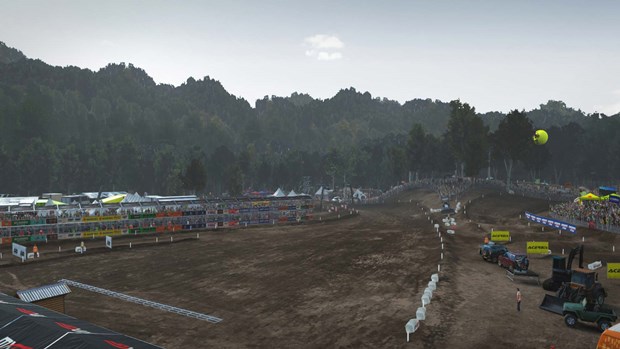 "Playing through MXGP 2 had me thinking primarily one thing: Motorstorm: Apocalypse, that was a good game, that needs a sequel."

To be fair, the game should’ve provided me with this, yet it did not. If it wasn’t obvious enough, this seems to be my primary problem with the game as it’s such a basic and staple feature. MXGP 2 should be thriving with adrenaline, personality, culture, and a “Don’t give a damn” attitude. It delivers none. This partly extends to the game’s choice of music which I didn’t feel had given enough pump or vibe if you will, in delivering sense of immersion that you as the player is actually part of this motocross world and lifestyle.

In terms of the game’s A.I., I couldn’t overlook the unnatural stiffness of the competing riders. While I don’t expect the most absolute best of the best when it comes to animation quality and natural movements outside of leaning and turning, I didn’t feel as though as I was racing with riders that were convincing enough for me to be engaged. They’re fine for the races themselves and the competition is there to keep players on their toes, but the stiffness that the riders brought frankly didn’t do it for me. 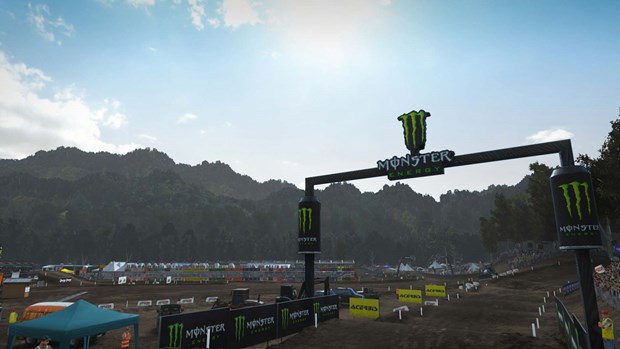 "MXGP 2 should be thriving with adrenaline, personality, culture, and a “Don’t give a damn” attitude."

So where does the game stand visually and how does it perform? Well, it’ll do. Expressing this through a filtered perspective of taking the game for what it intends to be and who it’s appealing to, the “next-gen” visuals that other racing titles have brought are pretty much baron here, and truth be told I don’t think its audience will even care. Could it run on an Xbox 360? Easily. Is it available on the Xbox 360? No. And it’s sad to say, but given my thoughts towards the game appealing to ten year old boys which I’m pretty sure that a fair majority of them are still on last-generation consoles, it seems quite strange as to why it’s not available there.

But this is the PlayStation 4 version however, and given that it’s not impressive yet at the same time looks just fine, that’s all that can really be said about it. More crowds? sure. More dust physics? Go ahead. In terms of the graphical obsession we’ve all come to know and love in how many blades of grass can be rendered on the screen, I guess it could be improved. My concern however is frame-rate. Long story short, it’s a racer and it’s not sixty. Nor is it even stable. It’s not game-breaking and the die-hards won’t care, but if this is a concern for those who considered it, now you know. 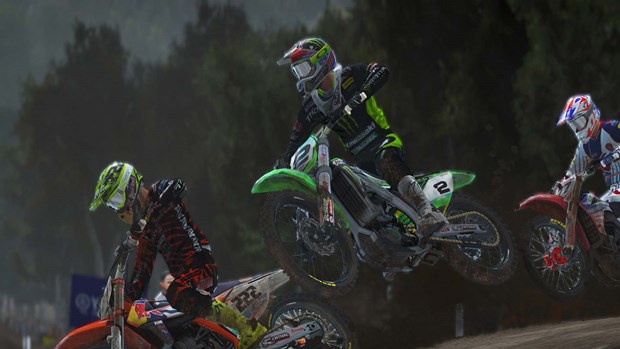 "The graphical obsession we’ve all come to know and love of how many blades of grass can be rendered on the screen, I guess it could be improved. My concern however is frame-rate."

A great deal of what’s been said about the game may have one thinking I would’ve much preferred it to have been aborted mid-way through development. Not at all. The game is enjoyable, it provides enough replay value within its game modes to keep people entertained, and it plays remarkably well if you take it for what it is. What it doesn’t do unfortunately is deliver enough excitement or motivation for playing it if you’re not familiar with the genre, but are curious in getting your feet wet. Fans will play it and play it, over and over again. But truth be told, there’s no competing game on the market whereby players have a deciding factor to begin with.

Am I going to play this again? This genre thrived during the PlayStation 2 era and hung in there just long enough to entice the release of MX vs ATV: Alive and MX vs ATV: Reflex. Guess we should be thankful that we saw the release of MUD not to mention Fuel for the Xbox 360. So, no. The game is good and fans will take to it but the genre in itself needs some kind of drastic improvement or overhaul if it wishes to remain relevant.

The enthusiasts may find interest within the amount of game modes on offer.

A game out of time without the enthusiasm nor passion to keep itself relevant.

Final Verdict:
BAD
MXGP2 has a distinctive crowd and does well to serve it. However, the game does nothing to bring about anything of encouragement for an audience that's now outgrown it's rebellious phase.
A copy of this game was provided by Developer/Publisher/Distributor/PR Agency for review purposes. Click here to know more about our Reviews Policy.